Continue to The Hollywood Reporter SKIP AD
You will be redirected back to your article in seconds
Skip to main content
August 30, 2017 12:54pm

Even from the outside, it’s plain to see that the Calvin Klein flagship in Manhattan has gone Technicolor. Approaching the fabled corner of Madison Avenue and 60th Street, the stately stone building practically vibrates, the bank of 34-foot-tall windows exposing a new chrome yellow paint job that covers every square inch of the walls inside.

It’s quite a turnabout for a fashion house that was previously known for cool minimalism and parsing the differences between neutral hues in its collections, such as sand, sea mist and shale.

The Get: Fall Shoes That Look Like a Party

Originally the headquarters of Morgan Guarantee Bank, the 1928 edifice was reborn as the Calvin Klein collection store in 1995 by noted Brit modernist architect John Pawson. He opened up the space with those soaring windows and installed an interior that was a minimalist magnum opus of white walls, clear glass shelves and flagstone floors. As New York Times architecture critic Paul Goldberger noted at the time: “With its almost monastic austerity, the Calvin Klein store is about as far from warm and cuddly as you can get. But it is a truly impressive piece of work, self-assured and rigorous, and it creates a stunning setting for Mr. Klein’s products.”

That was then, this is now.

Last year, designer Raf Simons took the reins of the house as chief creative officer and his first version of the Calvin Klein designer collection for fall 2017, redubbed CALVIN KLEIN 205W39NYC, has just landed at the newly reimagined flagship. The line was a smash hit with critics when Simons showed it a few months ago during New York Fashion Week, and he collected Council of Fashion Designers of America Awards for both best men’s and women’s designer in the interim. Now, with visitors from across the globe flocking to the city next week for the spring 2018 shows, the store is a “must-see” for anyone doing a retail tour. 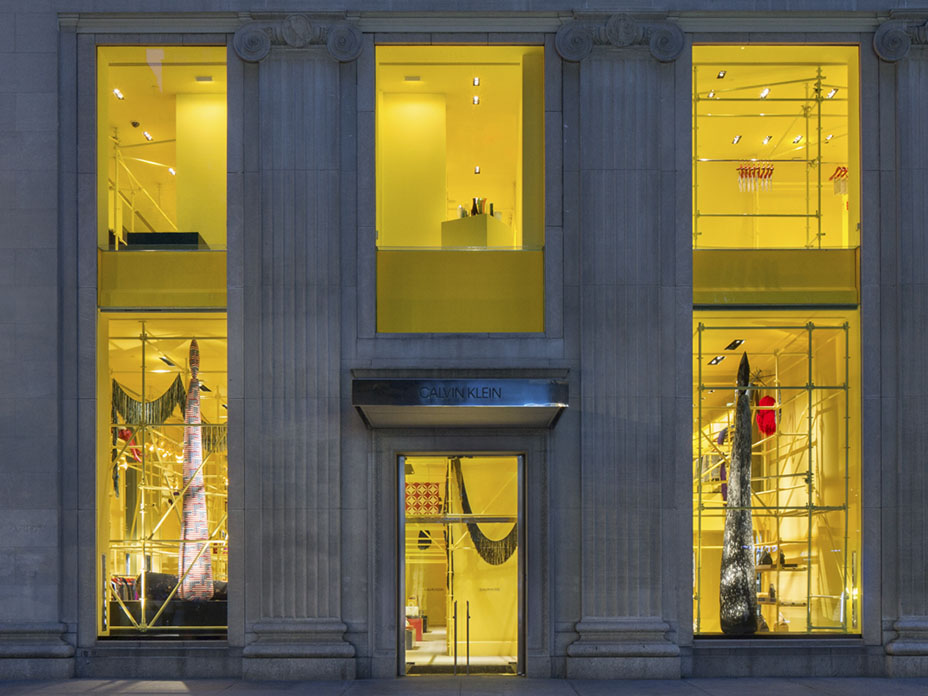 Simons’ creative partner in reworking the boutique is Los Angles-based artist Sterling Ruby, known for his large-scale, magpie installations and contextual urban influences. As Ruby nearly chortles in the press release for the reopening, “I’m taking the CALVIN KLEIN flagship store from minimal to maximal; my design should be seen as a marker to celebrate the future of the brand.”

Ruby has installed an admittedly amazing, full-size construction within the interior, pitched around a framework of the kind of scaffolding usually seen at construction sites and all painted the same caution yellow. Mannequins in bright red sit perched at various levels, fringed banners are draped across the space and, here and there, relics of Americana like vintage quilts are folded and draped over the racks. 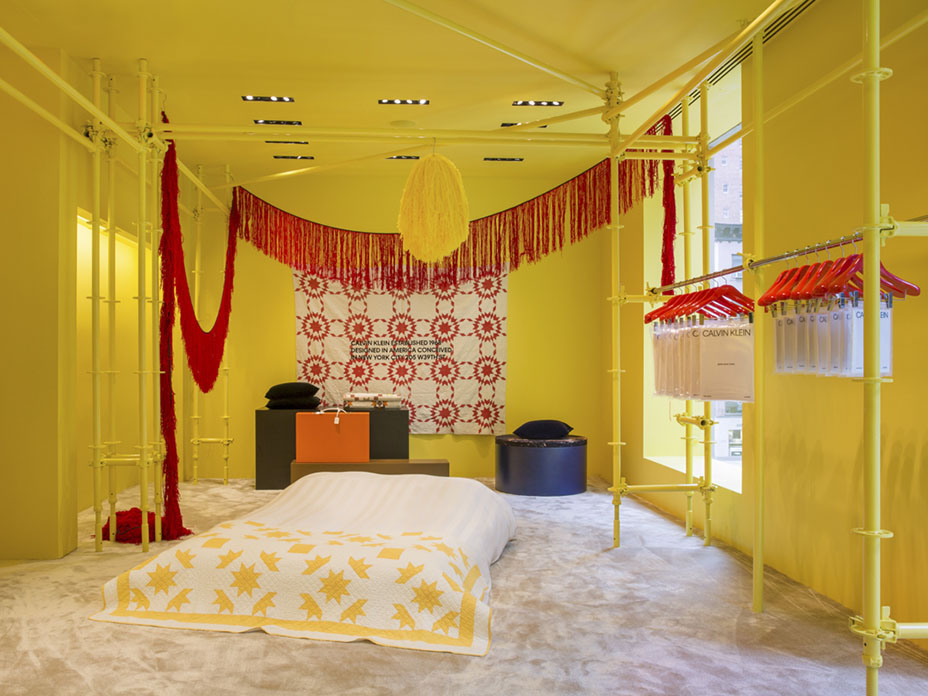 The flagstone has been covered in a generic beige carpet, and geometric forms in primary colors display shoes and bags. Oversize “soft sculptures” that look like oversize wooden spindles lay across the floor or are propped up against the wall, some in a patriotically colored stripes-and-polka-dot print. Even the wooden hangers are bright red, impossible to imagine in the house founder’s era. That color is particularly noticeable when gazing at a row of hangers, from which carefully pressed Calvin Klein white briefs hang.

@calvinklein flagship with fascinating redo by @rafsimons & @sterlingruby. Though yellow walls and scaffolding are far from @johnpawson original minimalist scheme, it’s weirdly exciting and of a piece with the new collection rechristened #calvinklein205w39nyc in terms of motifs like quilting, skewed Americana, bold color. #fallfashion #fall2017 #nyc

Fashion world insiders will recognize these motifs from the both the Raf Calvin Klein runway space and sales showrooms back at company headquarters, but this is the first consumer-facing evidence of the brand’s transmogrification. Simons was said to be unhappy in his previous job at Christian Dior because his creative purview only extended to the women’s collection and not any of the collaterals like store design and advertising. Now with his role at Calvin, he has control over all facets of the products and their rollout. Even at other retail outposts like Barneys New York and Saks Fifth Avenue — which hadn’t stocked the Klein top collection in years — the clothes are displayed with the same scaffolding and on the same red hangers. 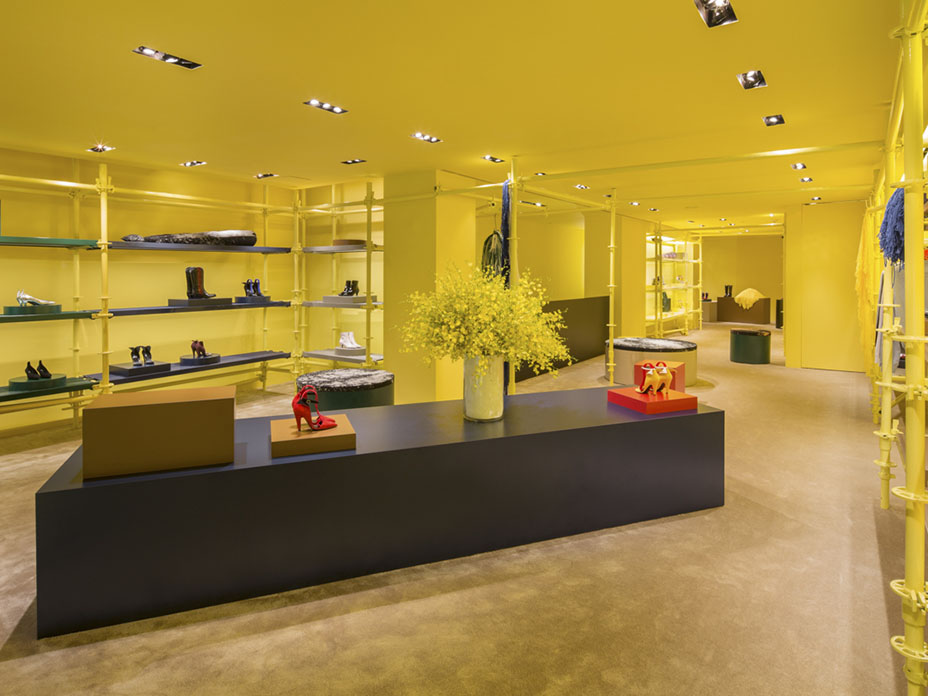 Going to the Calvin Klein flagship now definitely feels like the kind of experience that they say millennials crave and the whole thing is endlessly Instagram-able. And it’s hard to imagine Simons’ fall collection — with its mix of inspirations from marching band uniforms to cowboy garb to, yes, an American quilt — being at home in the chilly old Pawson space. It’s too early, though, to tell how Raf’s vision for Calvin Klein will do commercially since the selling season is just beginning.

But the example of another high-profile designer about-face might provide a clue. When Gucci’s Alessandro Michele took his brand from a listless state of generic luxury to a reflection of his own idiosyncratic vision, sales soared. With that in mind, it seems like understatement just wasn’t made for these times.