From vivid blue diamonds to an iconic zip necklace by Van Cleef & Arpels, there’s no shortage of sparkle at Christie’s upcoming Magnificent Jewels sale, set for Tuesday, April 16 in New York. Featuring 292 lots, this first event of Christie’s 2019 international auction season for jewelry has been planned with plenty of dazzle in mind, curated to include a mix of vintage pieces and major stones (valued at up to $8 million) that seem destined for the red carpet.

How to pick favorites among the selection? For auction organizers, some lots can feel a bit like holy grail moments; such is the case with a pair of fancy intense yellow diamonds included in this sale, one totaling 37.65 carats and set in a ring and the other totaling 35.06 carats and originally set as a pendant. The diamonds will be sold as separate lots, with the ring estimated to fetch anywhere from $600,000 to $800,000, while the pendant carries an estimate of $500,000 to $700,000. “I’ve been working on these two pieces for 15 years. They’re quite impressive,” says Daphne Lingon, head of jewelry for Christie’s Americas. “The owner has had these pieces for years, and I’ve always stayed in touch with them, updating them with how the market is. And right now the market is strong, especially for colored diamonds.” 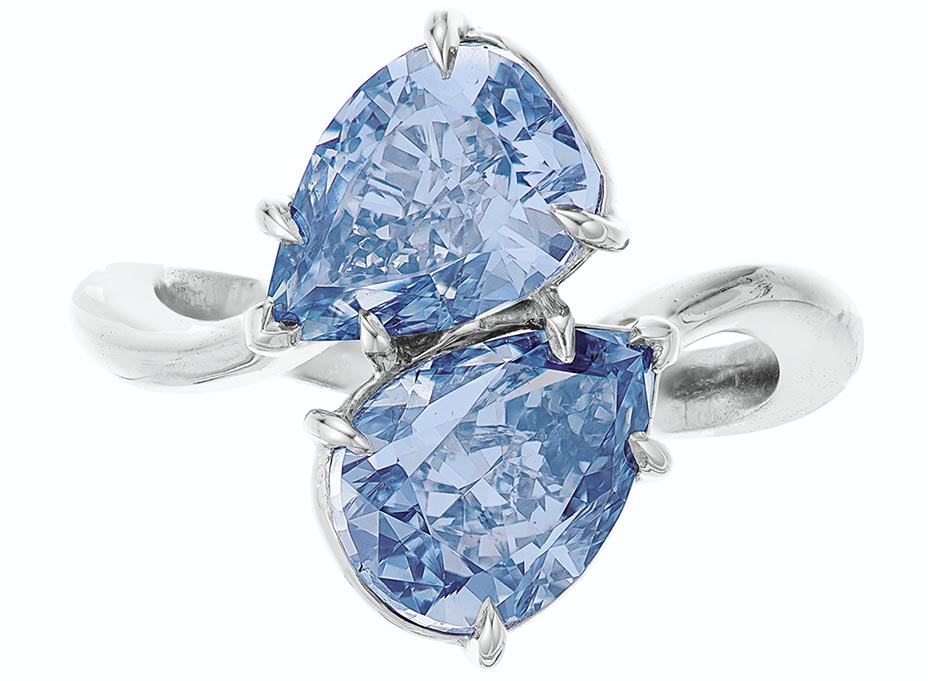 Indeed, hefty diamonds in a variety of hues are included in this sale, though the event’s highlight should be a pair of well-matched pear-shaped vivid blue diamonds, at 3.06 and 2.61 carats. The stones are currently set in a ring and will be sold together, carrying an estimate range of $6 million to $8 million. “To find a pair of matched stones like this, which are the same color and quality, is exceptionally rare,” Lingon says.

The sale’s offering of sizable stones is nicely balanced with vintage pieces that should attract buyers who love art deco jewels or designs considered iconic to their respective houses. Among the latter is a Van Cleef & Arpels zip necklace that dates to the 1950s, crafted in 18-karat gold and platinum and embellished with rubies and diamonds. The style was first designed as a custom piece for the Duchess of Windsor in the late 1940s and takes its name from its working zipper, which allows the necklace and its fringed tassel to convert easily to a bracelet. “It’s truly spectacular, in great condition with a perfect working mechanism,” Lingon notes. “In 2011 Van Cleef & Arpels introduced new zip necklaces, but the older ones are quite hard to find. Since 2004, this is only the fourth one we have sold.” 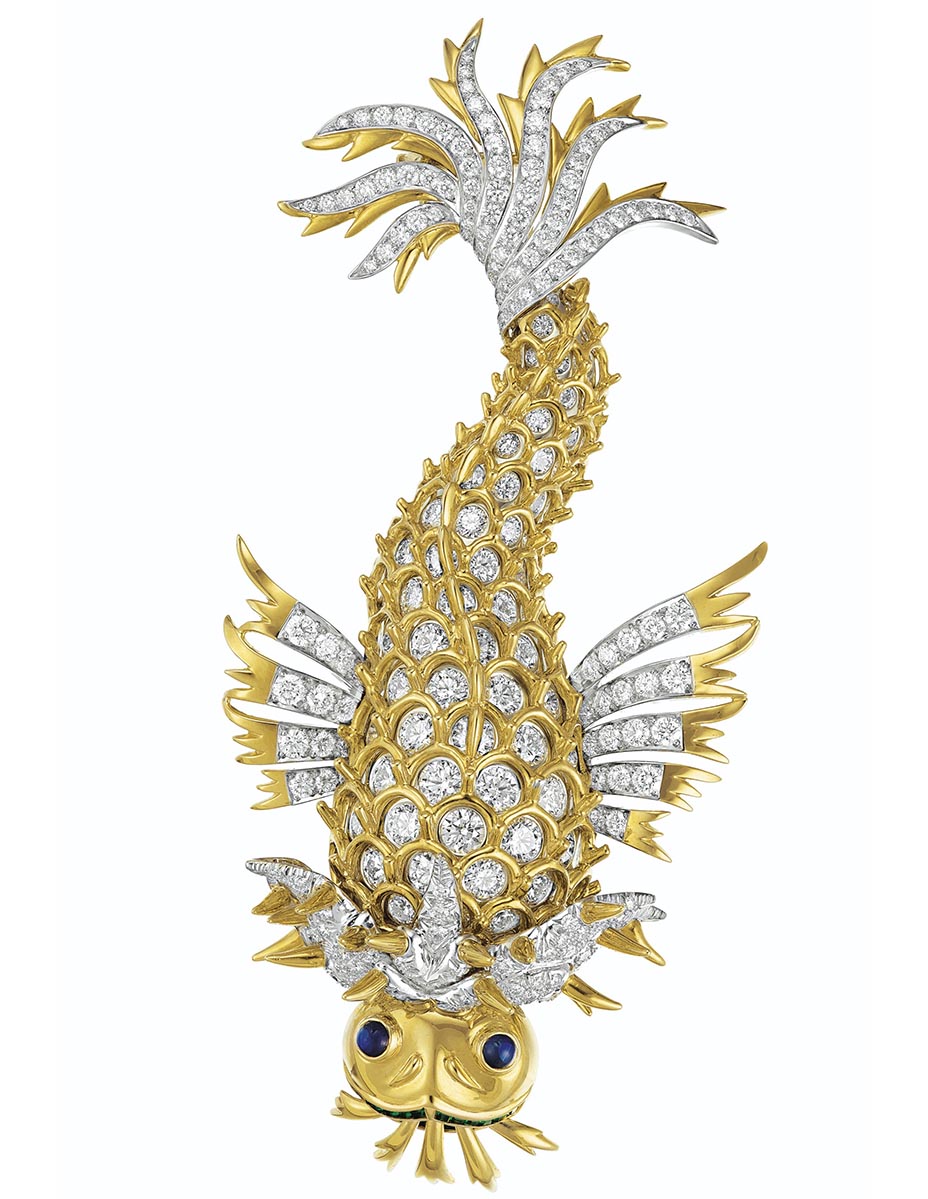 Other vintage jewels include a Bulgari necklace featuring multi-colored stones — “What I love is that they cut the stones to fit the design, rather than vice versa,” Lingon says — as well as several whimsical animal brooches by Jean Schlumberger for Tiffany & Co., including an example of his famed “Bird on a Rock” brooch and his “Dolphin” brooch, featuring diamonds, emeralds and sapphires set in 18-karat yellow gold. “We always think of that as an iconic piece worn by Elizabeth Taylor, because she wore a Dolphin brooch to the premiere of The Night of the Iguana [in 1964],” Lingon says. “Schlumberger loved nature, especially floral and sea motifs — this piece has such presence, as well as a lot of textural and sculptural quality.” 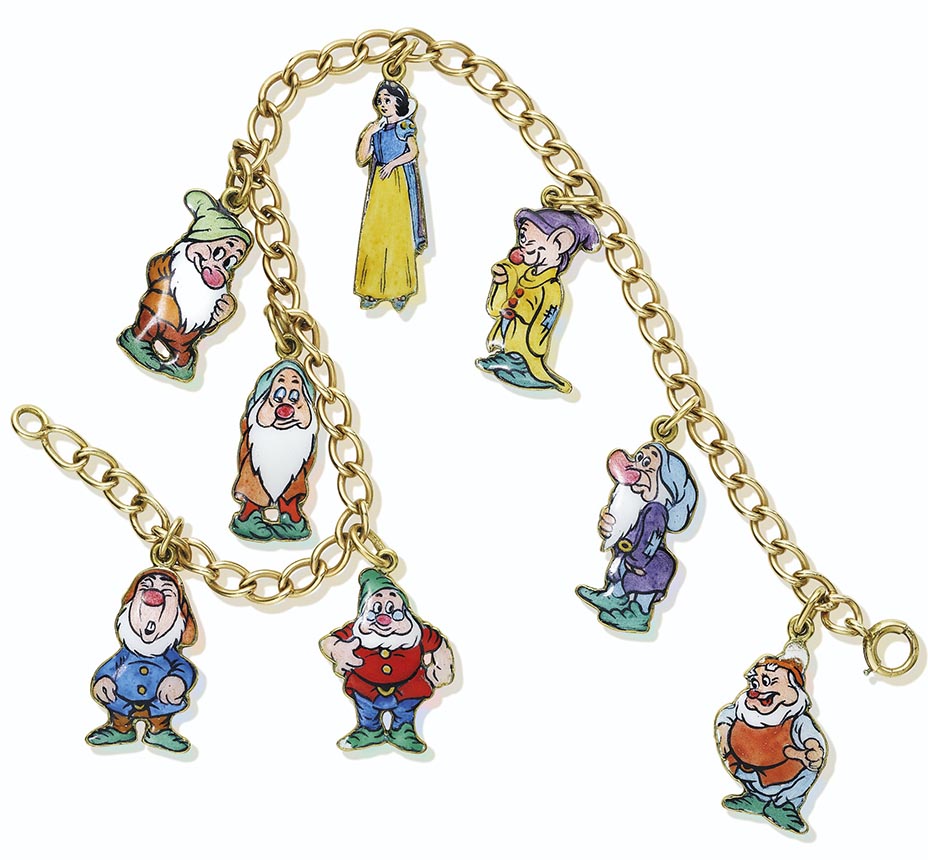 Another bit of Hollywood sneaking into the April 16 sale is a 1937 yellow-gold charm bracelet, crafted by Cartier and featuring accurate depictions in enamel of the dwarfs seen in Disney’s Snow White and the Seven Dwarfs. “This may be the first piece of jewelry ever created to promote a movie — it’s quite a rare piece, and we don’t know if there’s another one,” Lingon points out of the bracelet, designed to honor the 1937 animated feature, which resulted in an honorary Academy Award — as well as seven miniature statuettes — presented to Walt Disney in 1939 for his “significant screen innovation.”

Of a preview of highlights from the sale in Los Angeles in late March, Lingon says: “In many cases it’s the only U.S. stop that’s permanent on our calendar; we have a significant group of clients in the area, so it’s important for us to bring those pieces and meet with them in person.”

Prior to the April 16 sale, the lots will be on display from April 12-15 at Christie’s New York at 20 Rockefeller Center in New York City.