“I have run and practiced yoga with Kirschen for 14 years now,” Witherspoon tells THR, “Her positive outlook and endless joy remind me of the power of the human spirit to overcome adversity.” Another client, Oscar-nominated producer Evelyn O’Neill (Lady Bird), calls her “a ray of sunshine! She combines power and spirituality in a beautiful practice that nourishes body, heart and mind.”

Katz is also the yoga advisor for Matthew McConaughey’s Just Keep Livin Foundation, where she leads inner-city, low-income students through yoga, breathwork and meditation for stress reduction and mind-body awareness. And Gulfstream Pictures’ Mike Karz is developing a TV series based on Katz’s story, including running away from her violent, Hitler-worshipping father as a teen. “Kirschen’s journey from pain and suffering to one of healing and hope is both extraordinary and inspirational,” he tells The Hollywood Reporter.

“My practice with her shifts my whole perspective,” says producer Carla Hacken. “Somehow yoga with her is way more than yoga. We have breathed, stretched, meditated, laughed and even cried for so many years I literally can’t imagine what I’d be like without her.”

I took my first yoga class in 1989 from Steve Ross, he was the original Hollywood yoga guru. I had a magical experience, and a few years later decided to become a yoga teacher. I was in a financially lovely place, my then-husband and I traveled a lot, and I taught when I was in Los Angeles. He moved us to the Four Seasons in Kona — the beginning of the end of our relationship. I had signed a prenup, and I fled back to Los Angeles.

It was 2005 and I was at my hairdresser in the Palisades, like, what am I going to do now? I’m 44, how am I going to reinvent myself? Talk about kismet: Natalie Garner — her husband, Todd Garner, is a producer — handed me her card and said, “Please come teach me yoga.” I did, and she introduced me to three women, two of whom I still work with: Jenny Belushi, Jim Belushi’s wife, and Shannon Rotenberg, whose husband, Michael, is a manager. I’m so grateful, they really helped develop my business, and introduced me to Reese Witherspoon, who 14 years later is still my client, too.

This town loves the best, hippest, youngest and newest, so the fact that my clients — most of them women in entertainment — have stayed with me for 10, 12, 14 years means I must be doing something right. I have tremendous boundaries. It’s knowing how to be in someone’s presence and their space. Julia Roberts’ nanny once advised, “Never let Julia go, ‘Where’s Kirschen?’ and never let Julia go, ‘She’s always around.’ ” We do have these intimate relationships, but I never lose the fact that they hired me, and I am there to serve them.

I also keep it fun, always throwing in things they haven’t done before. But we can go heavy, and we often go deep. Private yoga is a very different animal: You’re in their homes, in their lives; they trust me, and I honor that.

My clients make decisions all day long, so when they’re with me, they don’t want to make any. They surrender. I teach vinyasa flow, heavy on the inversions. Everybody’s gone up in a handstand, with me supporting. Once they go up, it’s exhilarating! I have them do push-ups in handstands. It’s a confidence builder. These are Emmy and Oscar winners, but we could all use a little more confidence. Being strong is really important for women over 40, especially in Hollywood. 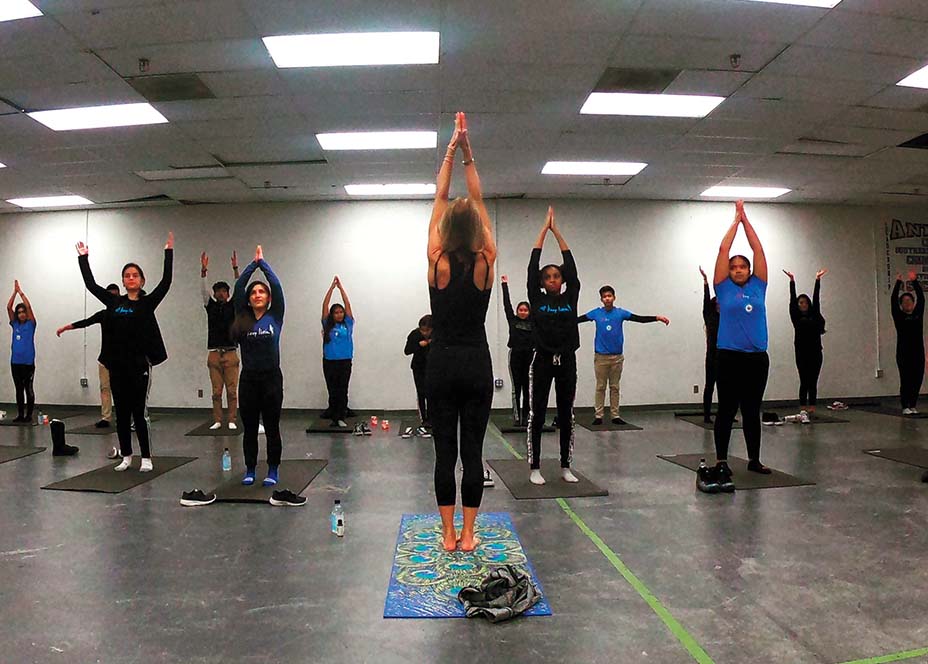 Every day changes. I go on runs or what I call “urban hikes” with some clients, Reese [Witherspoon] especially. It’s a chance to get things off their chest and workshop issues coming up. I also do shiatsu massage. My clients all hold tension in their rhomboids, trapezius and cranial ridge. I stand over them and get my thumbs into their shoulders. They say, “Your thumbs could kill!” And at the end of every class, everybody gets a head scrubbing — some people ultimately just want that for 45 minutes.

These women are booked, and everyone is highly stressed, shoulders dropping forward. When that happens you never get a full diaphragmatic breath, so I’m constantly having them open their chest and pectorals. My favorite ways are with bridge pose, shoulder stand and wheel.

We do a lot of breathing when people are getting ready for films, new projects and awards shows, especially. That Sunday morning is about relaxing the shoulders and doubling the length of exhales. I talk about finding the space between thoughts. We have 60,000 thoughts a day, and the majority are negative for many people. I try to have them visualize a space between thoughts and everything calms down — it’s nirvana.