Just weeks away from June 1, Tina Knowles Lawson is preparing to walk the carpet at her third annual Wearable Art Gala in something that will wow. Co-founded with her husband Richard Lawson, the event aims to raise money for their non-profit gallery and performance complex WACO Theater Center as well as their mentorship programs Tina’s Angels and Richard’s Warriors. Part of the fundraising is a silent art auction, with works on display in a gallery at the gala.

“I have a goal of two and Richard has a goal of three,” said Knowles Lawson, who spoke with her husband by phone to The Hollywood Reporter, underlining her hopes of surpassing last year’s $1.2 million raised during an auction moderated by Star Jones, who will return again this year. “We’re grateful for what we do. As long as we can fund our program, that’s what we’re asking for.

This year’s gala theme, “A Journey to the Pride Lands,” is inspired by Jon Favreau’s CGI film The Lion King, due out July 19, in which Tina’s daughter Beyoncé Knowles-Carter voices Nala. “So Disney has come on as a sponsor and we’re very excited about that because we get to use a lot of their assets in terms of content,” Knowles Lawson said. It also continues a celebration of African culture, following last year’s Black Panther concept, which guests interpreted with headdresses, garments made of Kente cloth and animal-patterned fabric. (Beyoncé and Jay-Z suggesting adding a theme in 2018).

Asked how the annual gala’s “wearable art” concept came about, Knowles Lawson said: “We teach the students that they need to have a place where art can occur … [so when] we had the idea to have a gala, I thought, ‘Wow, wouldn’t it be cool to include wearable art?’ Everything would be very artistic, from the food to the drinks to the way people dressed. That’s how it was born.”

As for what the couple will wear this year, Knowles Lawson teased that it might have to do with the king of the jungle: “Timothy White does a lot of Beyoncé’s costumes; he and I are working on my costume as we speak. He’s going to do Richard’s costume as well. I don’t want to give it away, because I want a big surprise, but I can tell you that it’s probably going to take us two weeks of work to do it. It’s labor intensive. I’m really excited about this costume, I can just say it’s animal-inspired.”

Hosted by the Lawsons’ North Hollywood-based WACO Theater and with Tiffany Haddish holding court as the master of ceremonies, the ticketed event (starting at $1,000) has a Hollywood-heavy guest list including Samuel L. Jackson, Octavia Spencer, producer DeVon Franklin, director Melina Matsoukas, screenwriter Mara Brock Akil, Magic Johnson and Kris Jenner as well as honorary chairpersons including Knowles Carter, Solange Knowles, Bianca Lawson, Kelly Rowland and Michelle Williams who are on hand to honor those who are making a difference.

This year, Tyler Perry will take home the Trailblazer Award and Felicia Horowitz is slated to receive the Everyday People Award in recognition of her advocacy for women’s rights, LGBTQ rights, harm reduction and violence prevention through technology, community and radical inclusion. Gloria Carter (Jay-Z’s mother) received the honor in 2018. 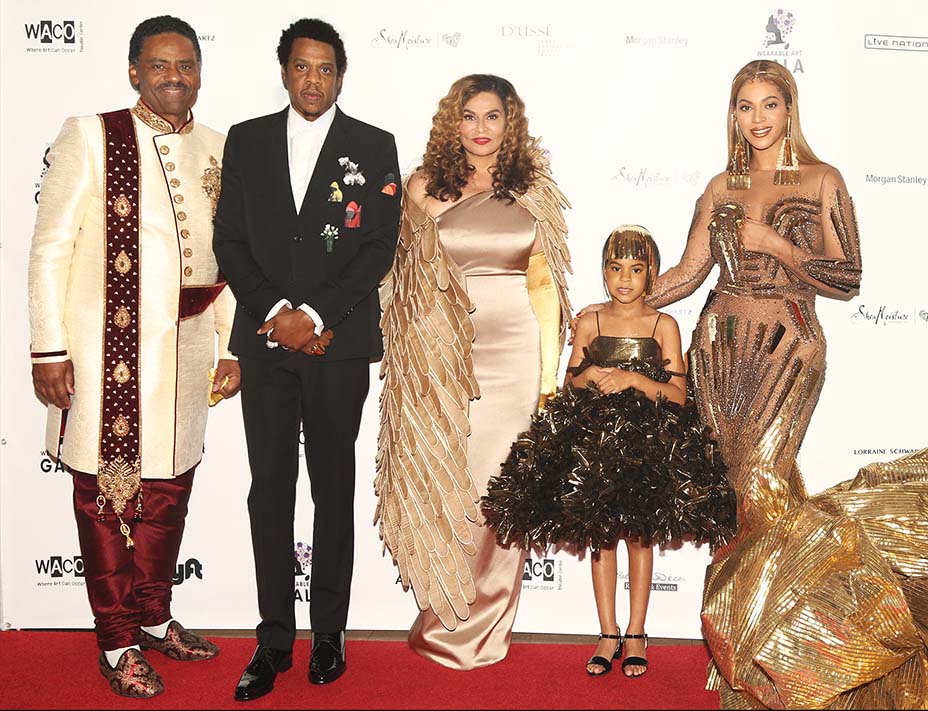 Beyond art and film, there is one other motif that has seeped into almost every detail. “Both Richard and I come from Creole backgrounds, and there’s always gumbo [served] because it represents all of the culture,” Knowles Lawson said of the Creole Louisianan dish that requires a plethora of ingredients such as seafood, sausage, varied veggies and spices. “Gumbo is so many things mixed together to create something amazing and that’s what our theme is too. You don’t have to be all the same. It’s great when you mix all the flavors and the spices together.”

As gumbo’s eclectic flavor provides a baseline of what it means to celebrate the dualistic nature of togetherness and individuality, it has also given the Lawson’s a spoonful of lessons on how to prepare for their big night. “The first year, Tina wanted to cook the gumbo, and rightfully so, because of the fact that there’s really nobody that cooks a better gumbo than Tina,” Richard Lawson said, before recounting a tale from their inaugural party that involved hundreds of gallons of spoiled gumbo as a result of not using a commercial refrigerator (advice from professional chefs); it cost the Lawsons hours of sleep, thousands of dollars and a few tears.

To remedy, Knowles Lawson “prayed and said, ‘You know what? I’m not going to let this defeat me,’” before proceeding to stir up her third and final batch that she finished just in time to serve at the event. Fast-forward to 2019 and that bittersweet moment has inspired her to hire a kitchen staff, resulting in the event’s first ever three-course meal.

“I’m very involved with the chef to make sure what they’re putting out there is authentic and great,” she said. “I touch everything that goes out. And I actually designed the decor because I want it to reflect our culture. We don’t just go hire somebody and they come in and do it. We are in the trenches doing the work to make sure that it’s a beautiful event.”

The affair will also treat guests to a musical performance by Maxwell as well as an experience that transports a slice of The French Quarter to Los Angeles (complete with stilt walkers, contortionists, aerialists, fiddle players and a brass band performance by The Mudbugs Cajun and Zydeco Band).

“It’s all the things that give you that carnival-like feeling,” Knowles Lawson said of the night, which also includes a Second Line (a tradition originating from New Orleans that allows funeral mourners or parade attendees to trail a brass line of musicians … sometimes for sheer revelry.)  “My favorite part of the gala would probably would be the Second Line. A lot of people in L.A. don’t even know what that is, but they get in that line and wave their handkerchiefs and dance and prance around the room. It just puts everyone in the best spirit.”

Funds raised at the event benefit WACO’s mentorship programs (Tina’s Angels and Richard’s Warriors) consisting of enrichment and leadership initiatives that empower inner-city students aged 12 to 14. So far, the program has exposed the students to many facets of life that include feeding the homeless, attending red carpet events where they meet stars, simulating brain surgery at Cedar-Sinai Medical Center, tutoring sessions provided by USC, as well as visiting museums and watching performances from the likes of the Alvin Ailey American Dance Theater.

The latter has proved to be a full circle moment for Knowles Lawson. “I grew up very poor and my parents really didn’t have the means for me to travel or to see things … my world was pretty limited,” she said. “At 14, this girl came into my life, she was my brother’s girlfriend and she took me to see Alvin Ailey. I got to witness all these beautiful black people onstage and to go to a really fancy dinner.”

Laughing, she continued: “She has since told me it really wasn’t fancy, but in my mind because I hadn’t seen anything, I thought it was. It also made me want to get out of Galveston [Texas], which is just a little tiny town that I grew up in. Had she not come into my life, it would be very different. We probably wouldn’t have a Beyoncé and a Solange. Life changes when somebody believes in you.” 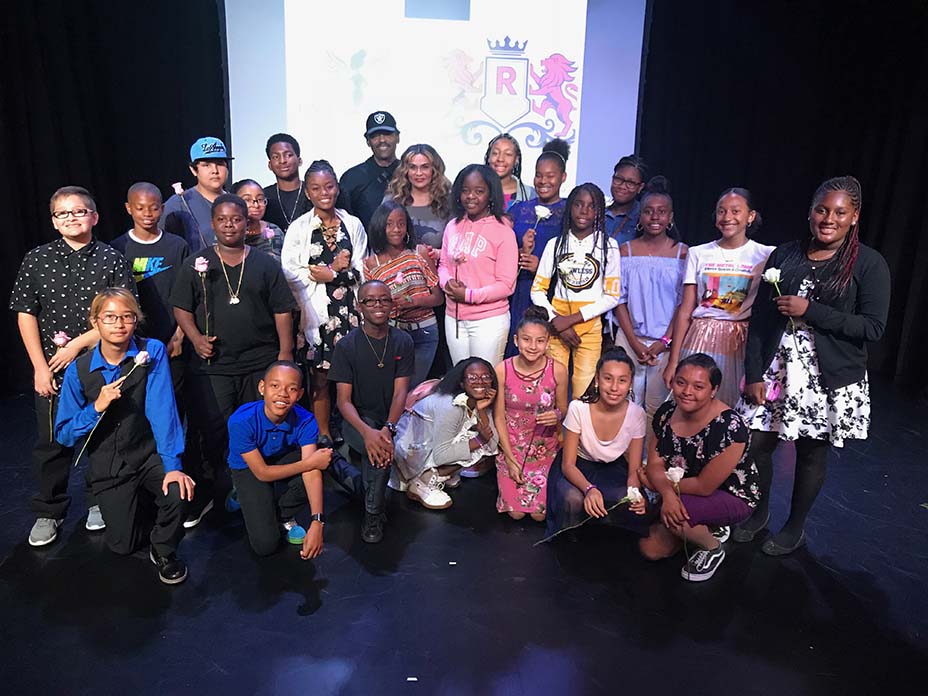 The Lawsons have a vision for their students (literally meeting with them three times a month) and have hopes of them breaking barriers in Hollywood and beyond.

“When I first got into the business in 1969, the landscape was barren [for black artists] when it came to possibilities,” said Lawson, whose credits include Grey’s Anatomy and Being Mary Jane. “There was Sidney Poitier, Diahann Carroll, Bill Cosby and a few others. And early on I realized what it was going to take to create a career for myself. But the amount of change and possibilities that have opened up have been incredible. Once you look on Netflix, you see all of the black product that is being done. The landscape of television is no longer limited to ABC, NBC, CBS and Fox. The access that someone can have is only limited by their imagination and due diligence to traverse this maze to get to whatever their dream is.”

He continued: “One of the things that we do is that we have a film camp. The first week, they focus on trying to really identify and establish what their dream is and how to go about making it happen. The second week, we put a camera in their hand and they learn how to shoot, write, edit, act and direct. They see themselves on camera in a very honest and truthful way that sort of dispelled a lot of the ideas and thoughts that had been put there by other people. So what has happened is they are seeing so many possibilities of how they can impact themselves, their families, communities, friends and the world. They can see beyond the limit of their zip code.”

Indeed, the program continues to help its members find more life outside of familiar terrain. “I can remember people talking about traveling and sitting there thinking, ‘I’ve never been on a plane,’ but acting like I had,” Knowles Lawson recalled. “So that’s one of the things that we’ve planned for the kids, for them to take an airplane ride, even if it’s just to Vegas or something.”

Potential jet-setting aside, summer school is also in the works. “This summer, they’re going through a program where they’re going to be able to learn to imagine games or software or apps that they think that the world would need or they’ve always wanted to do,” Lawson said. “They’re going to learn how to write code, how to look at marketing, how to look at investments and how to make these things real for themselves. So, you know, we’re having a great time helping them expand their own dreams into this world and to make a difference.”

In honor of #MothersDay2018 we celebrated in style, hosting an elegant #hightea for our Angels, Warriors and their mothers. The program gave our students an opportunity to treat the mother figures in their lives. Everyone dressed up in pink, dined elegantly and perfected the etiquette skills they had been practicing while honoring the amazing women in their lives! What a special #MothersDay #WacoTheaterCenter #WhereArtCanOccur