It has been a long road to Las Vegas for glitz twins Dean and Dan Caten, designers of the high-fashion sport/glam/streetwear brand Dsquared2.

Considering their bold, flashy, over-the-top aesthetic matches the personality of Sin City so well, many assumed they already had a boutique there. But when they finally arrived on the Strip this week with their own store at The Shops at Crystals, as well as wardrobe credits for Ricky Martin’s new residency, All In, at the Park Theater, they made an epic splash.

“We are just breaking into America, as far as [our own stores], and we only had three shops until Las Vegas finally hit. It was kind of a synchronization that we were opening and [Ricky Martin] was [going to] open,” says Dan. 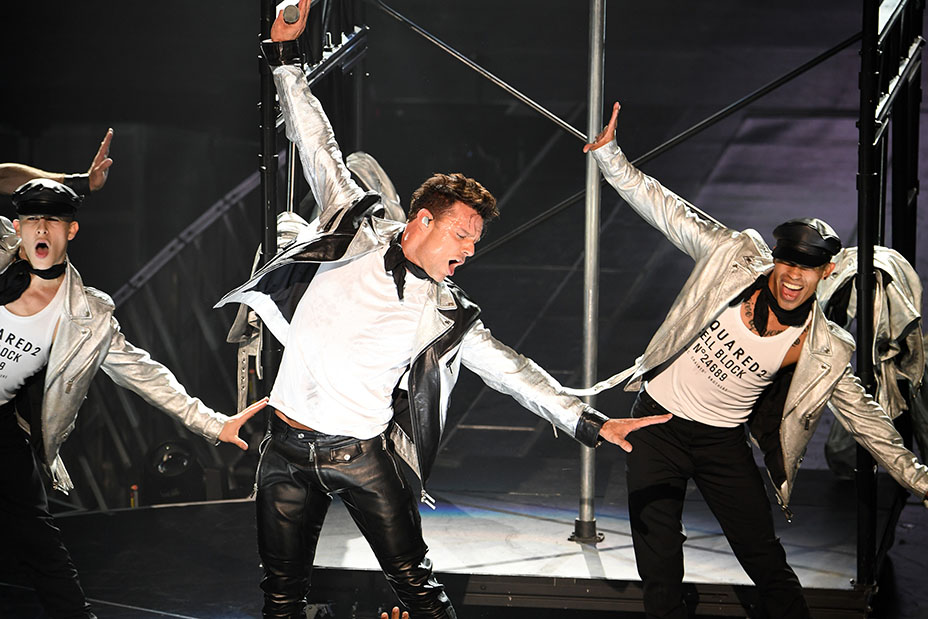 The pop singer met the designers in 2001. “I got obsessed with what they were doing,” he says, noting that one of his first Dsquared2 items was a shirt emblazoned with the words “River Rat.”

Since then, the trio has worked together many times, culminating in the debut of Martin’s first residency, which will continue through mid-April and then into June, July and September.

“I wanted a sense of freedom, a sense of liberty, and I wanted to push things forward,” says Martin. “And this is what they do best. They’re always fun yet elegant, classy, funky.”

“The choreography with the clothes made them come alive,” says Dan. “Each theme was very straightforward, very understandable. Bond, Brando, Elvis.”

One particularly stunning ensemble is Martin’s tux for the opening number, “Livin’ la Vida Loca,” in which he lowers from the ceiling on a Lucite platform, surrounded by his 16 dancers swooning around with oversize plumed fans. The detail on his jacquard tuxedo jacket matches the iridescent dazzle of the props and the dancers’ equally adorned bodysuits.

Although they’ve designed some individual stage costumes for Beyonce, Britney Spears and Madonna, this is the first time the Caten twins have created a production of this magnitude. And with a costume change attached to almost every number and three complete sets of wardrobe for each dancer, the scale is huge.

“There is one song where I don’t change, and I felt awkward,” jokes Martin. “I’m like, ‘But we have time to change!’ ”

There was minimal back-and-forth about the direction because of the trust within the group; there were only some slight adjustments to take the clothes from the runway to the stage.

“I went through and [said] ‘yes’ immediately. I loved everything,” says Martin. “I have one change where I have 12 seconds. So we do Velcro instead of the actual button-down jeans. The fashion aspect of it is extremely important for me — it has always been. And for me to be able to work with them was exactly what needed to happen.”

Whether they’re costuming a stage show or in their shiny new boutique inside the Daniel Libeskind-designed Shops at Crystals, Vegas fits the Canadian pair quite nicely.

“[We are inspired] by the luxury, the glamour and the sparkly parts [of the city],” says Dean. “Old Vegas.”