“Welcome, Madame President,” said longtime Valentino brand ambassador Carlos Souza, greeting House of Cards’ Robin Wright to the front row at Sunday afternoon’s show. In an amusing turn, the actress, whose character became president in a surprise storyline at the end of season 5 of the Netflix political thriller, was seated at Valentino in front of Barbara Bush, daughter of former real-life president George W. Bush.

Wright has been making the fashion show rounds this week: She started with Saint Laurent on Wednesday, wearing a caped black mini dress by the house’s designer Anthony Vaccarello, after he made her a sparkling embroidered black mini dress to wear to the opening night of the Cannes Film Festival in May, when she was The Hollywood Reporter’s best-dressed of the day.

On Saturday, Wright was front row at the Mugler show, after wearing a black sequin Mugler gown at the 2017 Emmys. She chose a short white corseted dress by the house designer David Koma that brought to mind the sci-fi costumes of Blade Runner 2049, the highly anticipated sequel set to open Friday. The actress said that although she was only on set for seven days, she could feel that the film was going to make a stylish impression and that the costumes “are very 1980s Comme des Garçons … and very Mugler, actually.” (She’s a woman who knows her fashion stuff.)

“It was so amazing to work with that team. [The film] is epic and visually beautiful,” Wright said. (Hey, you don’t have to tell us twice.)

Mugler, the renamed house of Thierry Mugler, certainly made a sci-fi stylish impression during its 1980s and ‘90s heyday. (Think Grace Jones in those razor-sharp shoulders.)

But Koma has charted his own course. For spring, he took the brand’s famous corsetry and strong hips as a starting point for sexy raw denim jackets, jumpsuits and mini dresses appealing to a more casual generation, but he didn’t stop there, mixing the cinch with the release of sheer goddess gowns that swirled around the body. 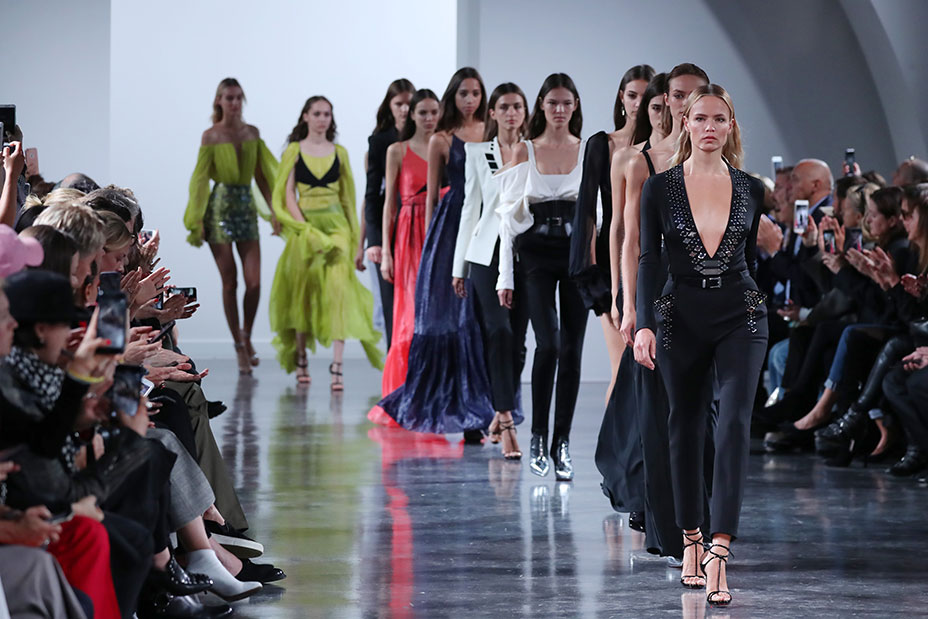 Koma said backstage that it was actually the bombshells of the 1971 film Les Petroleuses that inspired him: “The characters are so strong and rebellious, but also feminine at the same time.” And yet, the sci-fi genre and the film Blade Runner in particular are always top of mind for both his work at Mugler and his own label, which have found favor with Taylor Swift, Hailee Steinfeld and Tracee Ellis Ross among others. Said Koma, who can’t wait to see the new pic, “It’s in my identity.”