Continue to The Hollywood Reporter SKIP AD
You will be redirected back to your article in seconds
Skip to main content
June 13, 2017 3:21pm

For RuPaul’s Drag Race fans, the scene at West Hollywood clothing boutique LASC on Monday night was — to quote a popular phrase from the long-running reality series — an extravaganza eleganza.

In the window, a collection of the host’s looks from season nine (all designed by Zaldy, Emmy-nominated for his work on the show last year) sparkled enough to be seen out on Santa Monica Boulevard. 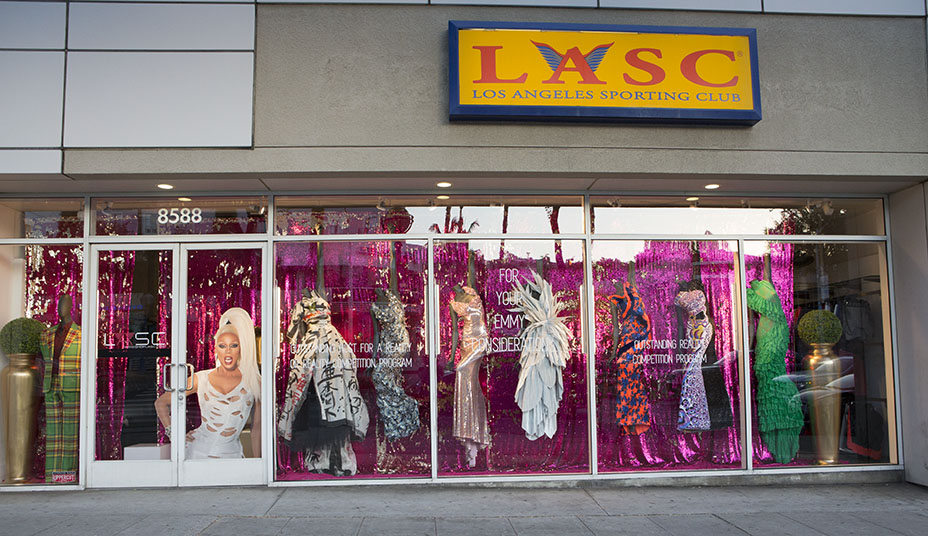 A lime-green suit checkered with orange, yellow and red hangs near a stunning array of gowns, including a look constructed from what looked like silver-dipped corn husks, and another in swirling pastels, decorated with an open mouth topped with wide peacock eyes.

Inside, at the centerpiece of the store, was the show’s most coveted item for contestants: the lavish silver pageant crown and scepter. The exhibition of costumes and props will be on display for four weeks. 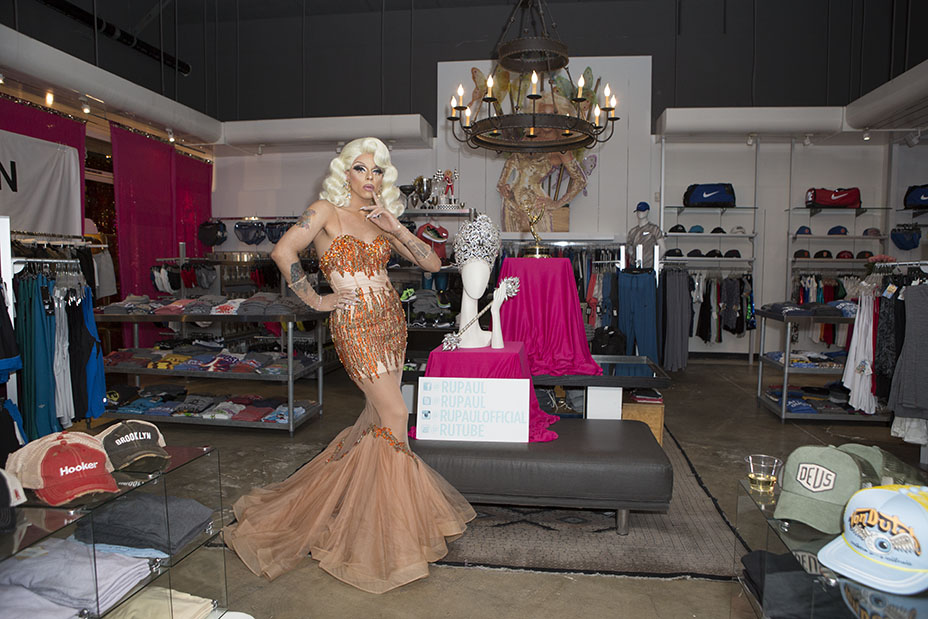 A coterie of RuPaul’s Drag Race contestants past and present held court with fans. It took awhile for RuPaul to arrive, but when he did, the energy dramatically shifted, as the crowd struggled to catch a glimpse of the Emmy-winning host as he stood for photos with the Drag Race stars. Valentina, the fan-favorite season nine contestant who was eliminated from competition several weeks ago, was a particular focus of attention as she posed in a sparkling black gown, black sunglasses and a platinum-blonde wig.

RuPaul, outfitted in a color-splashed Moods of Norway suit, noted that of the costumes displayed, a white silk organza gown adorned with black Chinese characters was his favorite. “I had so much fun wearing that dress,” he said gleefully. “If you see the episode, you look at my eyes and you can see I’m just, like, living.”

This Hairy Chest Swimsuit Exists, For Better or for Worse

The other drag queens in attendance represented an impressive range of looks, from season nine contestant Eureka’s towering wig and form-fitting black and white dress (“It’s very Leigh Bowery-inspired without the gimp mask,” she laughed) to Mariah Balenciaga’s flowing, “easy breezy” rosé-colored gown (“I wanted to show a softer side,” the Season 3 contestant purred). This diversity was noted by two-time Drag Race runner-up Raven, who wore an elegant all-black dress accented with a multi-layered gold chain necklace and matching full-finger rings.

“I think [the show] has opened a floodgate of queens in every genre,” she said. “Whether you’re a punk queen, a comedy queen, a fashion queen … it has helped to show there’s a place for you in drag, no matter what kind of drag you do.”

For RuPaul, the glamorous gowns on display are a far cry from the costumes he wore early in his career. While living in New York in the 1980s, the host came up in the “Genderf—” school of drag that was for him a direct response to the Reagan era’s conservative politics. But RuPaul changed course when it became clear that the overtly political style was tamping down on his potential to make a real living.

“Before it wasn’t about sexuality, it was always about sort of political, personal politics of ‘Oh, boys aren’t suppose to wear this? Well, f— you! I’m gonna wear combat boots and a raggedy wig and smeared lipstick,’” he said. “So when I switched over and had to make money and do sexy, that was when I had to make some changes in my outlook.”

For RuPaul, that’s also when it stopped being fun.

“It’s fun working with the girls each season,” he responded when asked if he still enjoys dressing up. “It’s fun to get their energy and to be with them. That’s the fun part. But the drag part, it stopped being fun when I couldn’t be naughty in the clubs and party. When I got famous, that all ended.”