More details have emerged about Russell Crowe’s plan for an April 7 auction of watches, movie and sport memorabilia, art, furniture, musical instruments (we count 19 guitars) and other items he’s collected over the years. There are even two motorcycles and a 2001 Mercedes-Benz S500. Sotheby’s Australia has scored the auction rights to the high-profile event, which has been christened with a title that offers a bit more insight into the actor’s motivation for the sale. “Russell Crowe: The Art of Divorce” adorns the auction catalog (which can be purchased for $60); details and photos of the event’s 227 lots were posted on the Sotheby’s Australia website  last night.

The Gladiator Oscar winner married Australian actress and singer Danielle Spencer in 2003; the couple, who have two sons, separated in 2012. The December 2017 timing of Crowe’s first tweet about the auction coincides with reports that the couple had reached a settlement agreement on their divorce and the auction site indeed refers to Spencer as his “former wife.”  That April 7 auction date also was not chosen randomly: It’s Crowe’s birthday and the couple’s wedding anniversary.

“Divorce has its way of making you really examine the things that are essential in life — and the things that are not,” Crowe said in a statement released by Sotheby’s Australia. “Through the process I had a look around and realized I had a lot of stuff. Career stuff, stuff I’ve collected, and stuff in general. Boxes and boxes of stuff…so in the spirit of moving forward into fresh air, here’s a portion of that collection of stuff.”

Crowe has been talking up the event on Twitter, highlighting photos and details of watches he plans to auction, including a Panerai he purchased in Madrid while promoting 2000’s Proof of Life and a Rolex Cellini he purchased while shooting 2007’s American Gangster. Among the highlights of Crowe’s watch collection is a limited-edition Vacheron Constantin, the circa-2005 Jubilee 1755 crafted in platinum, created to celebrate the brand’s 250th anniversary.

Paintings by Australian artists and a range of jewelry  and watches by the likes of Asprey, Cartier, Chanel and Chopard from Spencer’s personal collection are also part of the sale. The latter includes a ring featuring a 5.13-carat radiant-cut fancy yellow diamond surrounded by marquise-cut white diamonds, set in 18-karat white gold and platinum. It’s estimated to fetch between $70,000 and $100,000 in Australian dollars, or roughly U.S. $54,932 to $78,486.

Caroline, i had many motorcycles, then I worked out I only had the 1 ass… going through the same process with watches,swords, chariots and the like . April 7th.#cinderellaman groin protector i wore in the championship bout against Max Bear, back in 1935.
It could be yours. https://t.co/0Rbm0l2AD4

For collectors of film memorabilia, Crowe is offering several notable pieces, including the violin he played in 2003’s Master and Commander: The Far Side of the World, and three separate lots that together comprise one of his Gladiator costumes, a “stunt cuirass” designed to resemble the torso armor his character would wear — auction estimate: $20,000 to $30,000 Australian dollars or roughly U.S. $15,700 to $23,544 — as well as Crowe’s matching wrist cuffs and leg wraps. There are even life-size prop horses and a functioning replica of a Roman chariot from the 2000 best picture winner.  Also on offer is the Templar tunic and chain mail Crowe wore in Robin Hood (estimated to go for up to $25,000 Australian dollars or U.S. $19,590).

When comedian Caroline Rhea asked Crowe via Twitter on Feb. 6 why he was selling his watches, he responded, “Caroline, I had many motorcycles, then I worked out I only had the 1 ass…going through the same process with watches, swords, chariots and the like.” And Crowe wasn’t joking when he added that he also would be selling his groin protector from 2005’s Cinderella Man, noting, “It could be yours.” (It’s in lot 25 and estimated to bring in $500 to $600 Australian dollars or U.S. $392 to $470.) A boxing glove signed by Crowe, Cinderella Man co-star Renee Zellweger and director Ron Howard also is among the auction items.

On Sunday afternoon, Crowe tweeted the latest auction details to his 2.75 million followers: The event will kick off at 6 p.m. Saturday, April 7, in Sydney (that’s 2 a.m. Saturday in New York or 11 p.m. Friday, April 6, in Los Angeles). The auction will be live-streamed and will take bids in person, online and via phone. The lots also will be on exhibit April 4-6 at Carriageworks, an arts and event space in the Sydney suburb of Eveleigh.

A private dinner and viewing is set for April 4 to benefit the Australian Children’s Music Foundation, which raises funds to provide music education and instruments for disadvantaged children and at-risk youth. The ACMF was founded in 2002 by Australian children’s entertainer Don Spencer; Danielle Spencer is his daughter and is a member of the ACMF board. 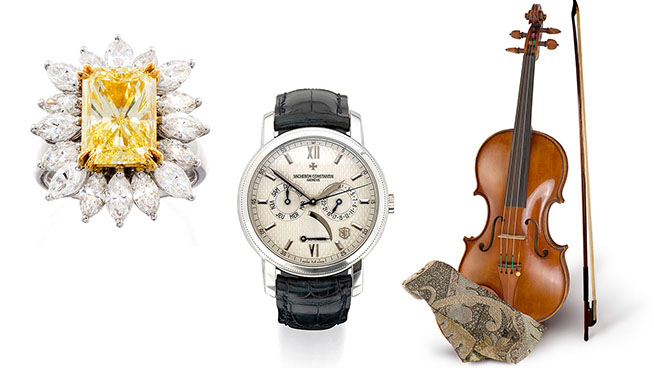