Robert Louis Stevenson — yes, he’s named after the Treasure Island novelist — was able to turn a three-day job into eight years at Universal. The third male hairstylist to get into the union in Hollywood, Stevenson made quite the impression during his first interview with Larry Germain, Universal’s hair department head.

“They didn’t have black hairstylists, and he asked me if I do white hair, pointing to a magazine with a Gibson girl on the cover,” says Stevenson. “There was an actress there getting her hair done, who had her sister with her. He asked the sister if I could do her hair, and I did it in 10 minutes.”

Stevenson had been in the Vietnam War prior to becoming a hairstylist. “My friend wrote me a letter from Germany. I was in Korea. He said, ‘When we get home, let’s learn how to do hair. We can make money, you know?’”

With more than 120 credits to his name, this year’s Make-Up Artists & Hair Stylists Guild’s Lifetime Achievement Award recipient notes how the industry has changed since 1970. “Women only did hair and men did makeup back then. It was very few minorities when I started, and I had a lot of techniques that I could share about doing African-American hair.”

He credits Josephine Turner — Lucille Ball’s wigmaker for 50 years — for making wigs his specialty. “She was like my fairy godmother,” he says. “One day, she sat me down and said, ‘If you want to be in this business and you want to stay, you sit right here and listen to me.’”

Retiring in 2009 but still continuing to work as a wig consultant and designer, Stevenson has styled the hair of Angela Bassett, Eddie Murphy and Samuel L. Jackson, with whom he worked on more than 30 films, beginning with 1996’s The Great White Hype. “He’s like the James Brown of the movies. The hardest-working man in showbiz,” says Stevenson, who recalls first meeting Jackson on the Decatur, Georgia, set of Just an Old Sweet Song (1976).

“Sam was a stand-in for another actor, Robert Hooks, a pretty famous black actor then. We started talking, and I asked him, ‘What are you going to do from this point on?’ He said, ‘Well, I just got out of college, and I’m going to New York to study my craft.'”

They met again years later on Coming to America (1988). “He asked if I remembered him. Of course I did! He [asked] if I could do his next movie. It was What’s Love Got to Do With It? (1993). He was going up for the part that ended up going to Larry Fishburne. I did the movie with Larry, but after I finished that one and Sam came up asking me to do The Great White Hype, our relationship just went from there.” 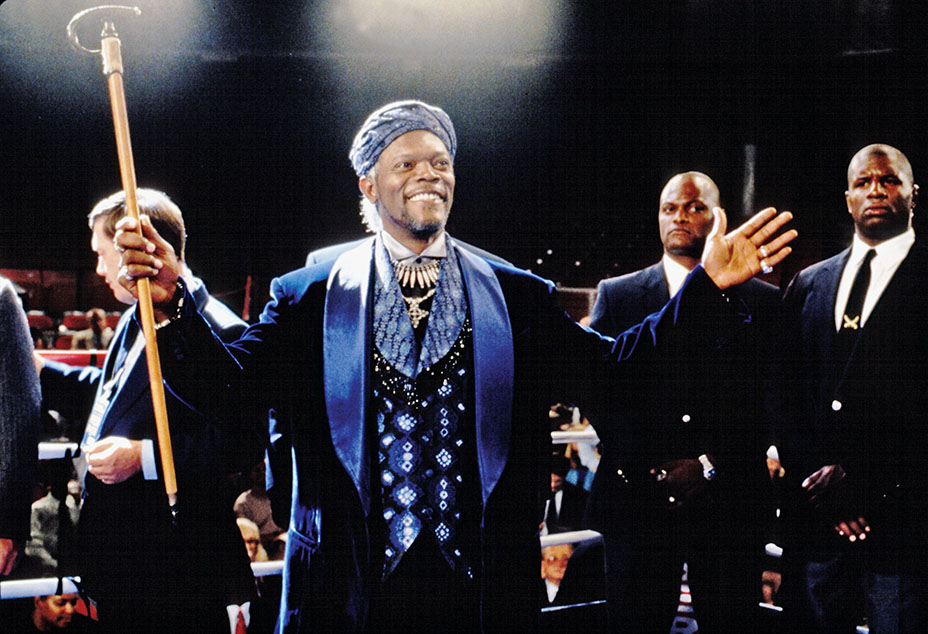 Stevenson also had a long-term partnership with Richard Pryor, spanning eight years. “He very seldom talked. Then, if he heard something he thought was funny, he’d ask you, ‘Can I put that in my act tonight?'”

Pryor was one of the first actors the Emmy Award-winning hairstylist was personal with in Hollywood. “We started off with Car Wash (1976). I was walking by and he was in a wardrobe fitting for a suit. He called out to me, ‘Hey, hey come here a second!’ I mean, he didn’t know me. I knew who he was. He said, ‘Does this suit look good?’ I said it looked nice. And he goes, ‘No, no, don’t tell me it looks good. Does this suit look good?’ And I said, ‘Yeah, it looks very nice.’ It was a white suit. He said, ‘What do you do? What are you working on?’ And I told him I was a hairstylist in a department. Then he asked me to work on the movie with him.'”

Previously honored by the Hollywood Make-Up Artists and Hair Stylists Guild for his work on Lee Daniels’ The Butler in 2014, Stevenson calls the whirlwind gig — a little longer than three months — one of the toughest jobs of his career. “I came out of retirement for that, but I didn’t know that they didn’t have a hairstylist for that at that point. They needed someone to start getting things going with the wigs.”

Collaborating with his friend Candace “Candy” Neal, Stevenson developed all the wigs for the characters, including the multitudinous wigs Forest Whitaker wore, and helped the actor’s hairstylist along, who was not as familiar with wigs. “His wigs weren’t just one-piece wigs. They were two- and three-piece wigs,” he says. “If he was younger, it had two pieces to give him more frontal forehead hair. And when he got older, we took the pieces off and moved them back. So, sometimes he’d have three pieces on.”

Lenny Kravitz’s hair was also a challenge for Stevenson. “He didn’t want to cut it or anything because he’s a performer. We had to get him a braider to braid his hair so we could get the wig on his head,” he says.

A fan of BlacKkKlansman and Black Panther (he’s worked with Oscar-nominated costume designer Ruth E. Carter a number of times), Stevenson jokes that “you can’t beat Europe if it were just the hair awards. That’s their history. They have more than one person wearing so many different wigs and the period is so on.” He adds that “it’s like how we know Westerns, although we don’t always get it right. We have saloon girls looking like they all walked out of the Cotton Club. (Laughs.)”

The oldest of 12, Stevenson is most proud that his two younger sisters followed him into the business, as well as his niece. “It all worked out for me, and it was the best career I could ever have in my life. It was the most blessed thing.”