While Sarah Jessica Parker spent over a decade acting as Carrie Bradshaw in Sex and the City—with an enviable walk-in closet full of stilettos — Parker also has a knack for business that extends well behind her eponymous footwear line.

Over the past five years, she has also launched fragrances, sunglasses, books with Hogarth Press, and (most recently) sauvignon blanc in collaboration with New Zealand-based Invivo & Co. She has even partnered with a local tour guide company to offer an official Sex and the City Hotspots Tour, walking through 40 shooting locations from the iconic Darren Starr television series. This week, Parker launched a new carry-on backpack created with Samsonite, which is already one of Oprah’s top picks for holiday gifting.

On Thursday, the 54-year-old star (and mother of three) spoke at Bloomberg Live: The Year Ahead Summit alongside her business partner George Malkemus about why colorful pumps are making a comeback (“There’s always a guy in the office wearing a purple tie, so why can’t women wear purple heels?) and how helping customers in her boutiques firsthand is one of her core business principles.

Parker launched her first line of fragrances in 2005, then turned to building her own eponymous shoe brand, the SJP Collection, in 2014. Tapping into her influence as a shoe-obsessed New Yorker, her line of women’s footwear ranges from sparkly heels to leopard pumps ($200 to $500). She now has nine boutiques in New York, Las Vegas, Dubai and Canada, with international retailers globally.

At the Bloomberg talk, Parker explained how she and Malkemus arrived in New York the same year, in 1977, and share the same vision for their shoe company.  After the panel, Parker spoke to The Hollywood Reporter about what drives her business, while also talking about her selfie rule, her forthcoming play — a revival of Neil Simon’s 1968 Plaza Suite, in which she co-stars alongside husband Matthew Broderick, their first joint venture in 23 years — and her Instagram response to reports of a Hocus Pocus sequel. 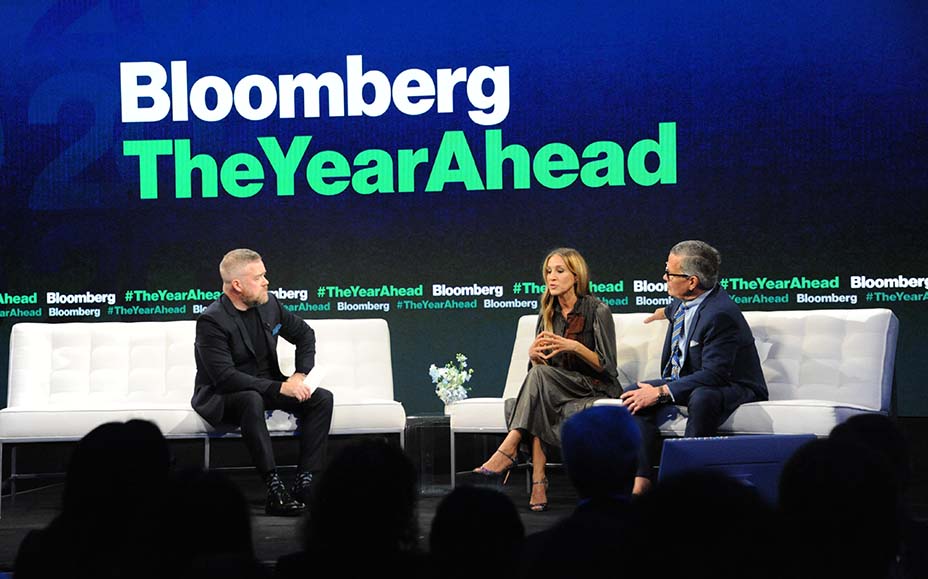 As a public figure who has nine shoe boutiques with international retailers (that you often work in), how does the the selfie factor play into your business?

The selfie factor is not a part of us. It’s not something we count on or use or is traded on, I will say. For us in the store, I don’t even do pictures. I go into the store, and I just work. The selfie has not played a significant or even slightly meaningful role in our business. The only pictures that are taken are while we are talking. What’s important to us, and why selfies don’t play a role, is that when people have their phones here [lifting up phone to eye level], they miss out on a whole human exchange. The minute they put down their phone, I know their name, where they’re from, how long they’re here, what are their life’s hopes and dreams! How long have they been out of college, what were they majoring in? What are they doing now? I’m sorry about your mother. People put their phones down and they have a real exchange. When they do this [puts down phone], I’m convinced that its more meaningful than this [she does the over-the-shoulder selfie pose]. So, I don’t do that. And I think it has been better for us.

What’s important is that we get to know them. It doesn’t matter if they get to know me. I care that I know them. It’s a little hard for people at first, when they ask “Can I take a selfie with you?” But most of the time, they don’t ask. They just hold up their camera phones. It’s startling. But the minute they put their camera down and I get to know about their family, their life, it’s just so nice. I’m always glad.

Is it hard to say no to a selfie?

It’s a bit hard at first. But I’m feeling more and more comfortable saying, “I’m just not allowed, I’m here to work, but what can I do? What can I show you? Sit down, take your coat off.” And that’s been really good for us. It gives us a chance to do our jobs.

Is Hocus Pocus 2 happening on Disney+ or what?

No, I don’t know. There has never been a conversation ever in our lives. Someone just asked me on Instagram, and I said: “We all said we’d love to someday.” But that’s the extent of the conversation. I’ve been asked so much recently about this — it’s a seasonal question… it’s appropriate! [When asked, “Any chance of a sequel?” last week on Instagram, Parker responded: “We have all said yes. Now we wait.”]

You were spotted at the Elizabeth Warren rally at Washington Square Park in New York in September. Is there any candidate that you’re backing?

A friend of mine sent me an email, and I wasn’t doing anything. I had a book I had to read, so I stood in line at 4:20 p.m. and I was excited to hear her. I was excited to hear her, but we have a lot of candidates and a rich and very interesting and diverse group of people who are wanting to be heard. So, I’m in the listening and learning stage. I think a lot of them are saying a lot of interesting and important things.

You and your husband, Matthew Broderick, will be reuniting on stage again for the forthcoming play Plaza Suite; how differently do you two prepare backstage?

We don’t know. We haven’t done it yet! We’ve never done it. We haven’t even started rehearsals yet, so. We don’t talk about those things in advance … We might notice that I get to the theatre a lot earlier, for instance, than he does. Or he’ll ride his bike there and I’ll take the subway. That you can be sure of! He’ll always ride his bike to the theater and I’ll always take the subway. He’ll take a Citi Bike or any bike he’s got thrown in front of our house. But I’ll always get to the theater earlier, he’ll always eat closer to the show and I won’t eat closer to the show. I can tell you that much.

Where do your good business instincts as an entrepreneur come from?

From your mouth to God’s ears! Thank you, I wouldn’t say, “you’re right!” but it’s nice to say so and I’ll take that to the bank. I’ve surrounded myself with very smart people who are leaders in their field. I’ve made a point of trying to work with people who I think are the best in their discipline, like George Malkemus, the shoe designer I work with for the SJP Collection. I think that if you’re curious and you’re learning and you want to be able to be a leader in your business, and for it to be meaningful to the people you hire, you better be informed. When you’re not, you better zip it and learn. So, when you are in a position to be in a conversation like this, I try to learn as much as I can and stay curious. I’m always asking why.

What drives you to run your shoe business, when you could easily just do acting?

I love this business! I would be happy to just be in this business, but I still love being an actor. Business is exciting. You learn a lot, you get to be around a lot of people, you’re always hearing other people’s ideas, you’re watching people grow, you’re promoting people from within, you’re watching young women have more and more responsibility. It’s probably why I like producing, too. You’re part of this collaborative process. You’re starting something from scratch; you’re building a story idea; you’re putting it on film. It doesn’t mean it’s not without a lot of trouble or complicated [and] exhausting. It’s difficult and it’s scary. It’s risky. And I’m not risk-averse, but I don’t want to be profligate. I don’t want to be throwing money around.

What’s the best-selling item on your site?

It’s the shoes; 100 percent the shoes. The best-selling shoe is the Fawn, the Minnie boot, the Meteor. They’re comfortable … We have two kinds of shoes: fashion shoes and evergreen shoes. You know your favorite shoe that you hope will never get discontinued? We are those people. We won’t discontinue your favorite shoe. We stick with it, so you can come back in two or three years, when your Fawn heels aren’t in perfect shape, and get them again.

Introducing: The SJP x @samsoniteusa Carried Away Convertible. A collaboration we’re so very excited to finally share with you all! This convertible set is our dream carry-all and we’re over the moon to share that she was selected as one of #OprahsFavoriteThings list in @oprahmagazine this holiday season. And the best part is, she’s 20% off now at @amazon! And at www.sjpbysarahjessicaparker.com (just use code OPRAH to redeem discount.) We can’t wait to see the many ways you wear her. With love, SJx