Paris Couture Week opened Monday with a jam-packed calendar reflecting the growing prominence of the week as more labels seek to show outside of the noise of ready-to-wear. In terms of locales, the spring shows were certainly diverse, starting in the storied rooms of Schiaparelli’s Place Vendome atelier and moving to an abandoned building on the edge of town before wrapping up at the Petit Palais.

Schiaparelli opened Paris Couture Week on a light note, despite the downpour outside. Designer Bertrand Guyon has been mining the house’s archive for inspiration, and this season he referenced founder Elsa Schiaparelli’s Pagan Collection of 1938. That collection gave us the beetle, which Guyon used here on jackets early on before moving into ethnic prints.

He also used African references, some literal and some through sandy and subtle colors. But he was careful not to relegate his references to one continent, especially one so often thought of as a monolith; he also conjured a dreamy druid, in the form of a cream hooded gown embroidered with flowers. His runway was especially diverse, too, notable as critics on both sides of the Atlantic have called out the fashion industry for its lack of black models.

Guyon has had success translating the surrealist designer’s vision into more modern takes, and here he tackled the problems of waste by refashioning plastic bags into raffia ribbon. A single heart dress was a nod to one of the brand’s oft-used motifs, and the insides of comfy-looking flatform shoes flashed that famous Shiaparelli shocking pink.

There were some red-carpet candidates here, in gowns that flowed like feathers. He’s certainly generated celebrity fans; Kylie Minogue and Melissa George are regulars at his shows and made appearances again this season. 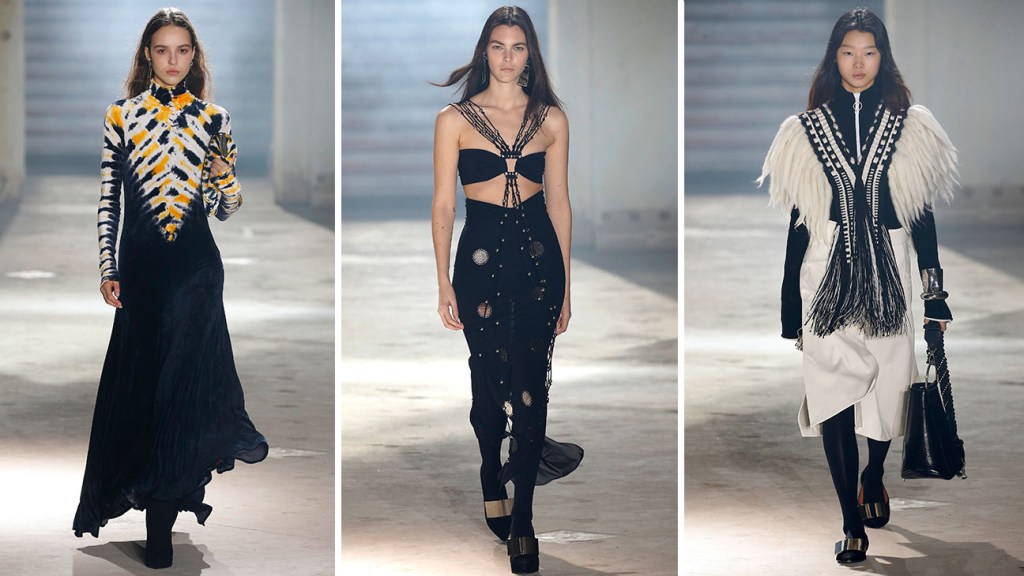 American designers Jack McCollough and Lazaro Hernandez are certainly going against the grain; first by moving their collection from New York to Paris, and then by showing their collection in a gutted parking garage far away from the gilded salons of the 16th. Plop the models on stacks of sandbags, and it made for a very downtown vibe virtually unheard of during the more conservative Couture Week.

But the collection was cool California ‘70s influence, with tie dye, patchwork and macramé. Show notes called it a reflection on American craft, with an infusion of embroidery and eclecticism. It was certainly down to earth in its color palette with plenty of sand and soft suede. Oversized breast plate necklaces felt like protection for the modern urban warrior.

There was beading and bikini tops, too. With plenty of fringe and fun, you might call it Coachella couture. But should that earn it a place on the official couture calendar, once reserved for the highest, made-to-measure, one-of-a-kind fashion? One group of impeccably dressed editors agreed: “Non! It’s ready-to-wear.” The Proenza boys are certainly shaking things up. 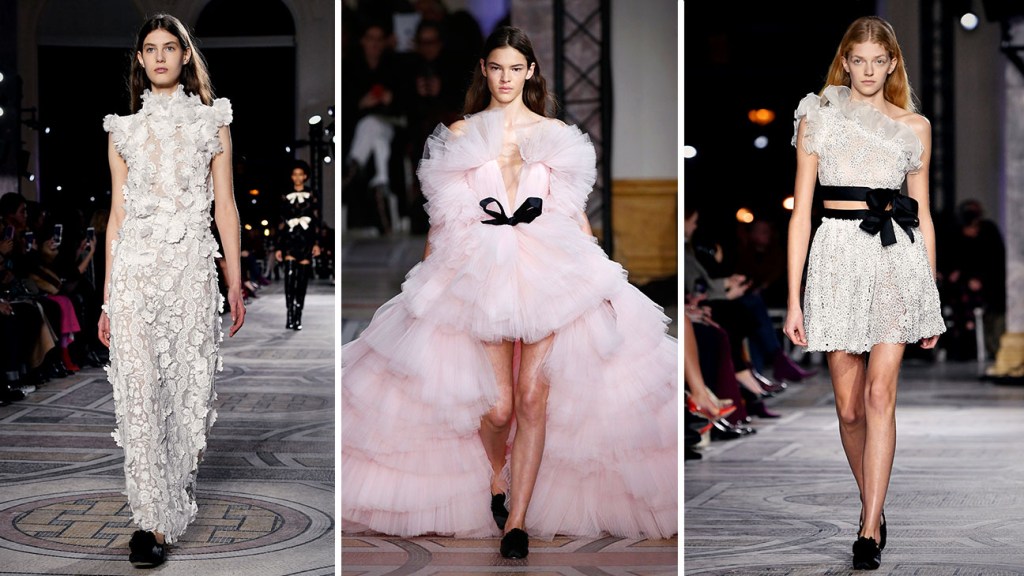 The Italian designer has ethereal down, with his delicate tulle creations always looking as if they’re ready for the climactic scene in a fairy tale fantasy. But his voluminous layers of tulle aren’t the easiest of sells for stars — Rihanna can pull it off on the red carpet, but it’s a bit of a challenge for mere mortals (even if they are of the famous variety).

The designer still showed plenty of that, but also some slimmer silhouettes in delicate white florals. He added a younger edge with midriff-baring ensembles that were two-pieces in both gown and mini length, practically daring young Hollywood to show a little skin. We could see Millie Bobby Brown in one of his creations (too bad she’s contracted to Calvin Klein).