Marlon Brando, Rihanna, Zayn Malik, Lady Gaga and Kanye West all have sported Schott NYC’s leather biker jackets, and now, with a new store on La Brea Avenue, the brand with a 104-year-old pedigree aims to dress more Angelenos, whether they’re famous or not.

New York-based Schott has moved from the Americana at Brand into a 1,100-square-foot spot along La Brea’s trendy, streetwear-minded retail row, tucked between Undefeated and Bonobos, across the street from Union, Stampd and American Rag Cie.

“We realized we aren’t just a mall brand,” said Jason Schott, the CEO and a fourth-generation member of the family-owned business. “We felt we needed to be on the streets.”

Projecting the rebellious spirit of the streets secured Schott’s place in Hollywood long ago. In The Wild One, the 1954 film about rival motorcycle gangs, Marlon Brando personified hell on wheels in the company’s Perfecto biker jacket. Peter Fonda also zipped up one of Schott’s designs as a counterculture iconoclast in Easy Rider circa 1969.

#throwbackthursday Peter Fonda and Dennis Hopper on the set of Easy Rider in 1968. #tbt #easyrider #cultclassic

Since the shop’s opening, stylists for The Weeknd and Bradley Cooper have dropped by, according to Thomas Blackadar, Schott’s general manager. For Ryan Reynolds’ wardrobe in Deadpool 2, Blackadar’s team sent a pair of tab-collar moto jackets, tinted black cherry to match the irreverent superhero’s preferred palette. In the week leading up to Coachella, the company said some of the music festival’s headliners have also requested cover-ups for the cold nights out in Indio, Calif.

“The biker jacket is iconic,” Schott said of the $735 Perfecto style. Still, he acknowledged, “we do a lot more than that. That’s why it’s important to have the store.” 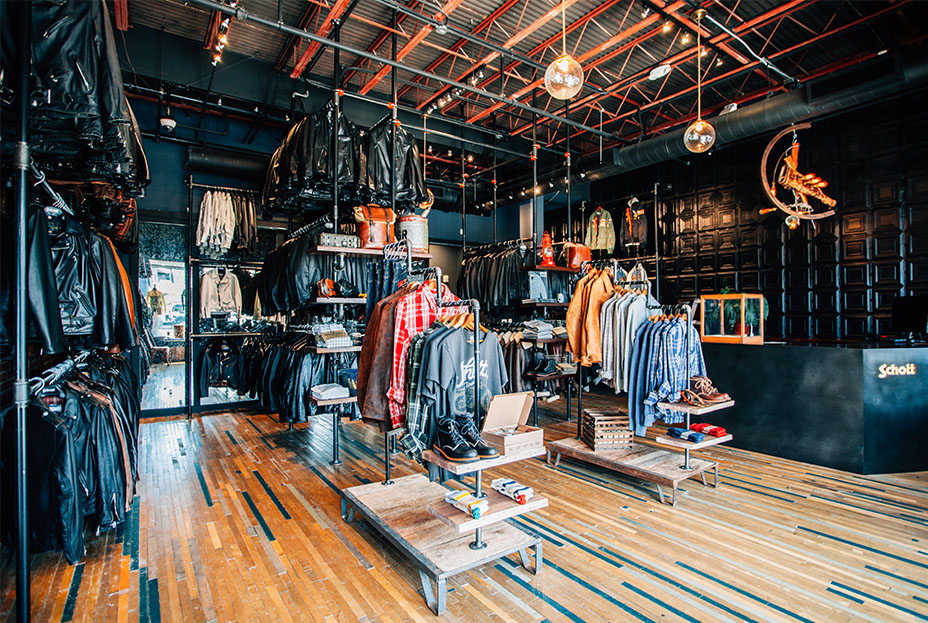 Modeled after Schott’s factory in Union, N.J., which manufactures the vast majority of its leather jackets, the store lives up to the ruggedness and durability associated with the brand. Within walls constructed of red bricks and black tin plates, in front of a full-length mirror assembled from wood, brown leather strips and rope, men can check themselves out in the brand’s $75 Horween leather belts secured with octagon-shaped buckles, $275 raw selvage jeans designed and sewn in Japan and $775 suede gas-station jackets.

Women’s clothing makes up less than 15 percent of the selection, but it lightens up the masculine atmosphere via items like $185 white nylon bombers embroidered with ivory-hued palm trees. For those not in the market for a jacket, there are also Shoppe 815’s soy candles, Chippewa’s made-in-USA boots and Coronado’s waxed canvas and shrunken bison leather ruck sacks fastened with Horween leather straps.

To appeal to more Angelenos, the company is addressing one crucial question: “How do we take our rugged signature but translate that into lighter-weight jackets that will be better suited to warmer climates like L.A.?” Schott said.

One answer is to shave the cowhide very thinly and to jettison any lining. Blackadar noted that the store plans to begin stocking leather shirts in September.

“There’s a movement of people asking us for leather bracelets,” he said. “We’ve been playing around with it. Also, we’ve got scraps of belts that are left over.” Although unable to pin down a release date for the new collection, he assured that “we’ll come up with the right bracelets.”