Once upon a time, the idea of “luxury vintage” conjured images of dainty, manicured fingers caressing velvet hangers dripping in mint-condition Dior New Look or Givenchy couture LBDs. “Secondhand shopping,” by contrast, was the vintage treasure hunt’s less fortunate cousin, more reminiscent of the scene in Ladybird, where mother and daughter pull up at a strip mall to rifle through mothball-scented mall-brand clothing for a prom dress.

But this is 2018, and the very perception of secondhand thrifting is shifting, according to a new report from thredUP, the resale retail site where shoppers can buy and sell familiar mid-tier brands like Lululemon, Gap and Anthropologie.

“One in three women shopped secondhand last year,” reports ThredUp CEO and co-founder James Reinhart. “Not just at thredUP or in apparel, but across all categories, consumers are shopping smarter and thinking secondhand first.”

ThredUP’s report, compiled from data collected from their own shoppers as well as third parties like GlobalData, reveals that the resale market is growing 24 times faster than traditional apparel retail and is expected to grow from $20 billion to $41 billion by 2022.

Reinhart adds that “the number of people who are trying secondhand for the first time is rapidly increasing. [Seventy percent] of new customers who shopped on thredUP were first-time resale shoppers.”

Roxane Gay on Body Positivity and Her New Pop-Up Magazine

A good chunk of these shoppers are millennials, who have taken their reputation as conscious consumers and run wild, pressing companies on issues like sustainability (77 percent are concerned about waste) and ethical working conditions, and recycling clothing themselves. Resale shopping is not only a sustainable and ethical option, it’s easier on the wallet, too. ThredUP reports that 40 percent of 18- to 24-year-olds shopped secondhand last year. That includes the likes of Lily-Rose Depp, Dakota Johnson and Chloe Grace Moretz, who have been spotted shopping at Golden Age, L.A.’s newest (albeit, pricier) vintage hotspot.

For some, the hunt — be it at thredUP (which opened a brick-mortar-space in Texas last year), Goodwill, eBay, flea markets or any number of secondhand boutiques — has become itself like a sport. A search for “vintage shopping” on YouTube yields 1.7 million videos in which shoppers detail the thrill of the quest.

There are a number of celebrities leading the charge on sustainable, ethical fashion, forgoing custom-made or off-the-runway gowns in favor of archival pieces. Just last month, Emma Watson attended the Vanity Fair Oscars party in an archival Armani gown (memorably paired with a misspelled tattoo). The 28-year-old actress/activist has long been a champion of sustainability, and even launched the Instagram account @the_press_tour to document her conscious ensembles.

Oscars Vanity Fair in Ralph Lauren from the archives. Great design is timeless and this dress, like vintage, is another way to wear a sustainable piece. Shoes by @rogervivier, a brand promoting craftsmanship and supporting their local town of Brancadoro . @tylerellisofficial bag handcrafted by a small team of artisans in Italy. Fair trade and recycled gold sapphire cuff by @anakatarinadesign , @anakhouri responsibly sourced ring and bracelet, and @vraiandoro earrings made from lab grown diamonds and recycled gold. For skin, @iliabeauty Vivid Concealer in Maca used as a lightweight foundation for a fresh look and a few dabs of @rmsbeauty ‘Un’ Cover-Up 22 under the eyes. RMS Beauty Eye Polish in Solar on the lid to add a bronze glow and RMS Living Luminizer under the brow to the top of the cheek bone. Ilia eyeliner in Rebel Rebel to enhance the lash line. Ilia Multi-Stick in Tenderly flushes on the cheeks. Lips @janeiredale lip liner in Spice and finished with Ilia Lip Gloss in The Butterfly and I. #timesup

Last year, Anne Hathaway and her stylist Penny Lovell made the decision to wear only vintage pieces for the actress’ Colossal press tour. “There’s been a lot of awareness about what’s going on in the world right now, and it felt organically like the right thing to do,” Lovell told The Hollywood Reporter of her strategy. 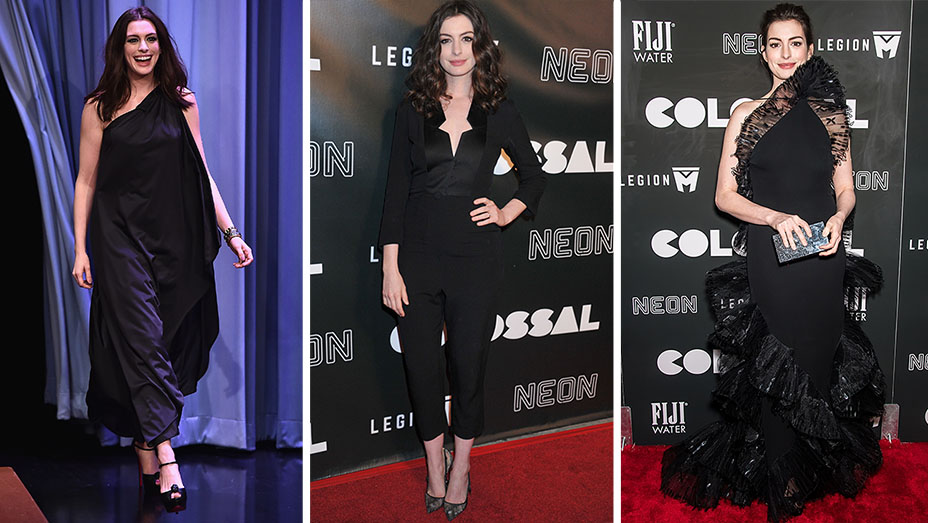 But it’s not just ready-to-wear apparel that is responding to the demand. Allbirds (sustainable sneakers), Girlfriend Collective (sustainable activewear from recycled water bottles) and Vrai and Oro (ethical jewelry featuring lab-grown diamonds) are all catering to the millennial masses. Meanwhile, rental concepts such as Rent the Runway and box services such as Stitch Fix, as well as luxury resale sites Vestaire Collective and The RealReal, are also competing for consumer dollars.

The shift is hitting mall brands and department stores the hardest; according to the report, 25 percent of consumers plan to spend less time shopping at mall brands, while 71 percent plan to spend less time shopping at department stores. Decreased store traffic is hitting these retailers hard — just last week, H&M revealed that it has more than $4.3 billion worth of unsold inventory. Maybe they should try selling some of it on resale sites?