Spike Lee flashed his 18-karat gold “Love” and “Hate” multi-finger rings from 1989’s Do the Right Thing early on in Sunday night’s broadcast of the 91st Academy Awards, while Hannah Beachler was resplendent in gold Wakanda-inspired jewelry when she picked up her history-making Oscar as the first African-American artist to capture the trophy for best achievement in production design for 2018’s Black Panther.

And though you might have missed Lupita Nyong’o on the red carpet, she likewise chose to make a statement, courtesy of New York-based jewelry designer Zameer Kassam.

The actress’ most high-profile appearance Sunday night was on the red carpet for the Vanity Fair party, wearing a white feathered one-shoulder dress, cinched with a black belt, by Oscar de la Renta, accessorized with Forevermark diamonds and Kassam’s ring.

Crafted of a 10-carat ethically sourced Forevermark radiant-cut white diamond surrounded by roughly one carat of round brilliant-cut black diamonds, all set in platinum, the ring (like the rest of Nyong’o’s look) was designed to evoke the stark black and white tones that have become associated with Time’s Up pins and other accessories that honor the movement devoted to eradicating sexual harassment. Kassam also designed a Time’s Up ring for Ashley Judd to wear at last year’s Academy Awards ceremony.

Like Beachler, Nyong’o wanted to celebrate Black Panther’s achievements on Sunday night, and Kassam was happy to accommodate her with a symbolism-laden design. “I wanted to give Lupita her own ‘Wakanda Forever’ moment for the red carpet, an exciting ring that would be bold and confident and give her a tool to speak about those things she’s most passionate about,” he tells The Hollywood Reporter. 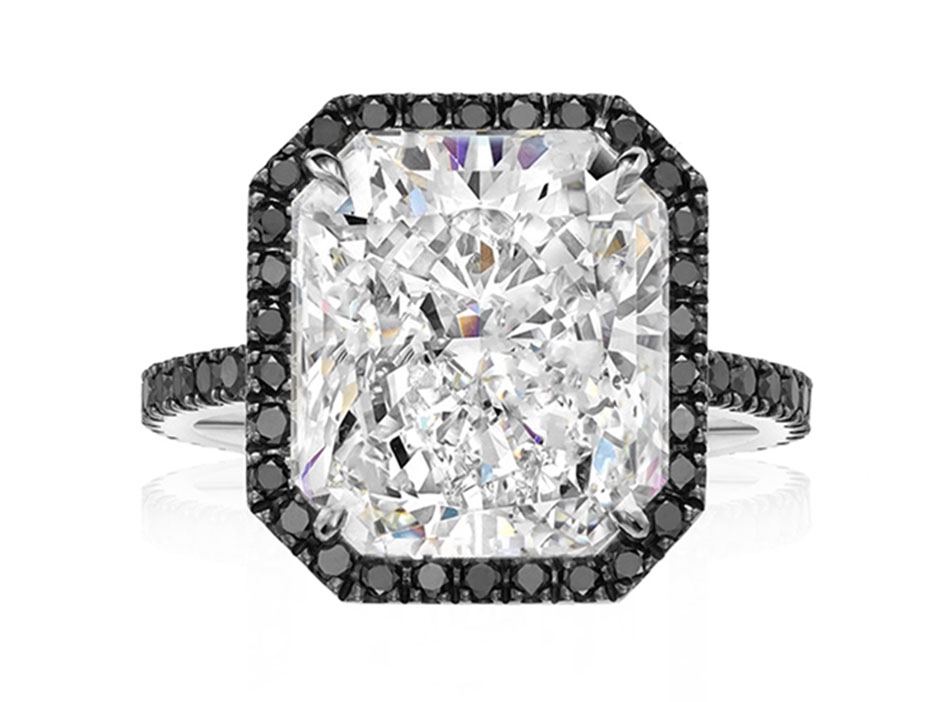 Kassam first worked with Nyong’o’s stylist, Micaela Erlanger, last year prior to the premiere of Crazy Rich Asians, when he produced jewelry for several castmembers of that hit film to wear at various events. As the 2019 Golden Globes were heating up, Erlanger spoke with Kassam about producing something “meaningful” for Nyong’o to wear for this year’s Academy Awards.

“About two weeks before the Oscars, Micaela and I were in touch again, and she gave me a sense of the color of Lupita’s dress, and we started exchanging text messages,” explains Kassam, and the race was on to complete the piece in time for Sunday night.

The 13 Jewelry Standouts From the 2019 Oscars

As he started sketching, Kassam wanted to ensure the piece would include elements Nyong’o indeed would find meaningful. That’s why he crafted the prongs behind the center stone to resemble the crossed-arms “Wakanda Forever” salute, while the 14 black diamonds that adorn the band on each side of the center stone are meant to conjure thoughts of the 2014 best supporting actress Oscar that Nyong’o captured for 12 Years a Slave. 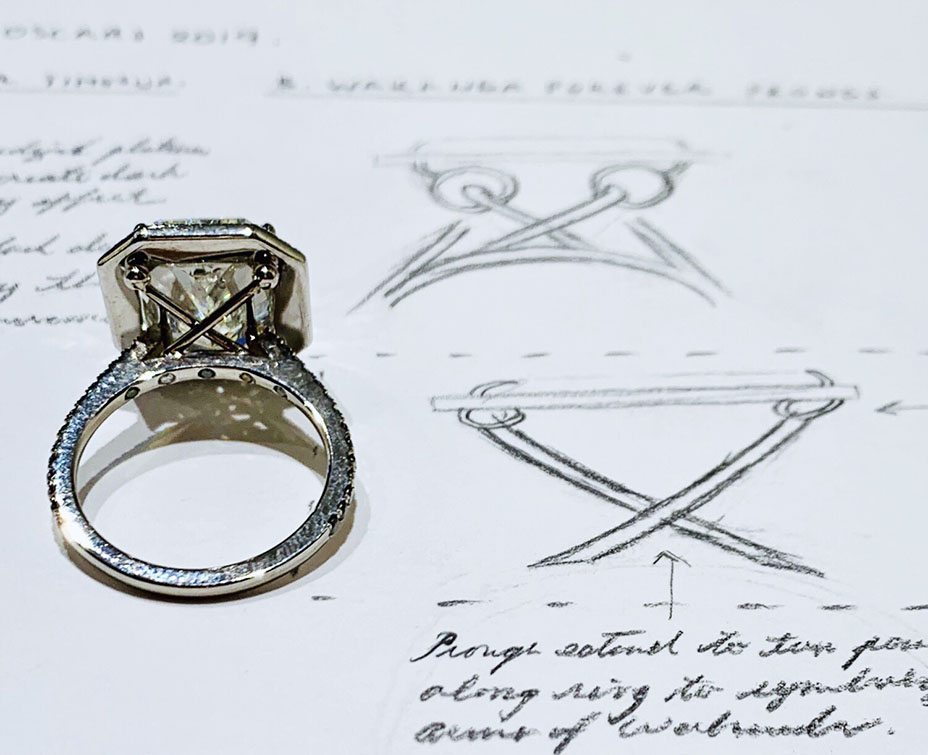 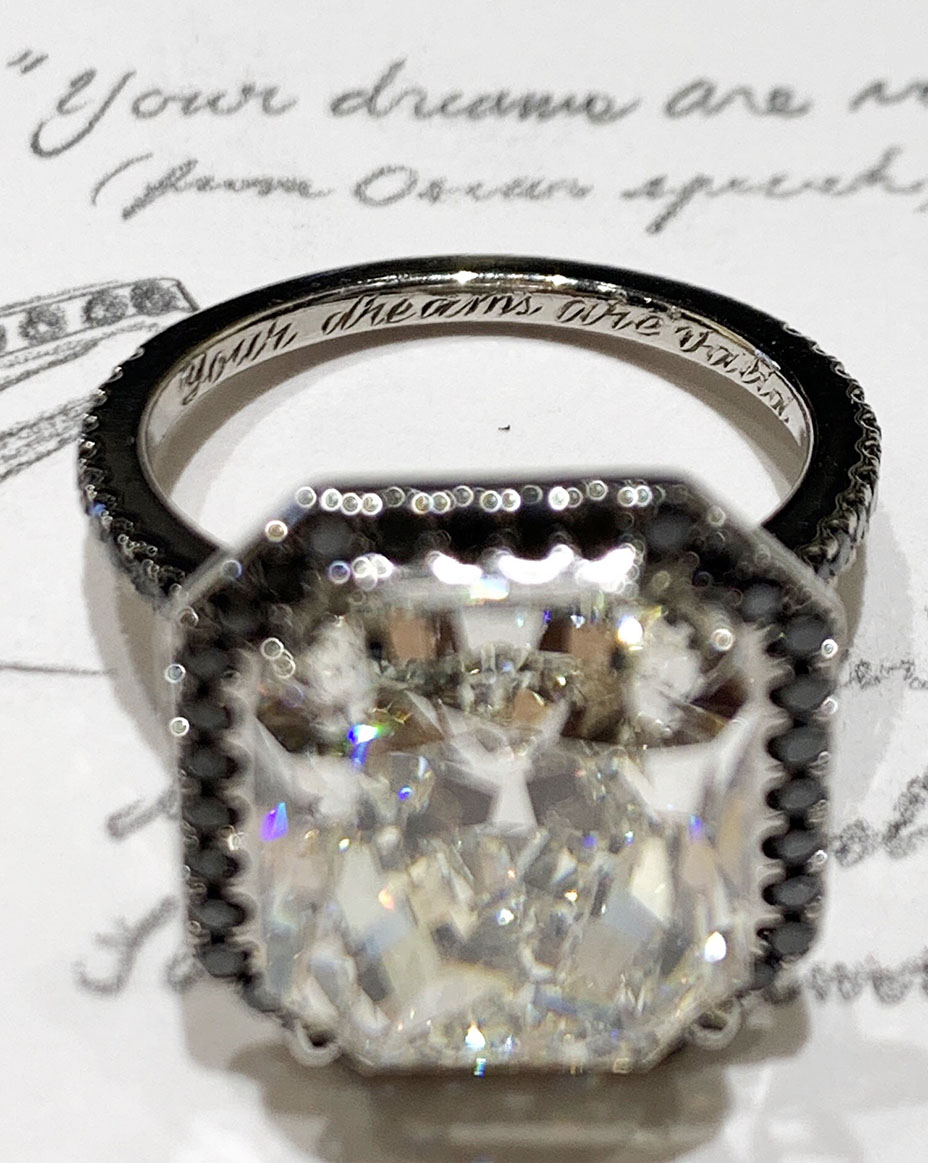 Kassam also inscribed “Your dreams are valid,” the final words in Nyong’o’s acceptance speech that year, inside the band.“I like all of my pieces to tell a story, so it was important that the ring reflected not only the Time’s Up movement, but a little of Lupita’s voice as well,” he says.

From final sketch to completion, Kassam’s studio only had three days to craft the piece. “We typically have anywhere from three to five weeks, so everyone here was working 24 hours a day to ensure we could get this done,” he adds. Kassam then personally flew the ring out to Los Angeles — at a final cost of $1.2 million, there was no other option. “I wasn’t going to trust it to anyone else,” he says.

And while the ring was highly personalized, that value also means Kassam won’t be gifting Nyong’o with the piece anytime soon. Instead, he says, it will occupy a special place in his house’s archives. “It’s a ring that was meant especially for Lupita, so we’ll hold onto it,” he says. “For me, it’s a very meaningful piece of jewelry, so we’ll keep it as a symbol of this moment in history.”