The annual event, which took place at the Taglyan in Hollywood, gave prizes to Gomez’s hairstylist Marissa Marino and her makeup artist Hung Vanngo while Gomez cheered them on from her table.

Jennifer Lopez’s hair guru Chris Appleton presented Marino with the accolade as Gomez’s hit “Like a Champion” played over the speakers. Marino hugged her client — who was in a baby pink Patou strapless minidress — and took to the stage.

“I think I just blacked out a little bit. … I feel extremely lucky to be able to do what I love every single day,” she said. “It’s surreal to me because two people that have given me huge opportunities in my career are here right now.” She started tearing up as she mentioned “Selena” and “Riawna,” referring to Nine Zero One salon stylist and mentor Riawna Capri, who tends to the locks of Taylor Swift and Megan Rapinoe. “It’s a very full circle moment,” said Marino, who has also worked with Anna Camp, Hilary Duff and Constance Wu.

Vanngo was called up and Gomez reacted when “Come & Get It” started playing. The makeup artist, who has also worked with Jodie Comer and Jennifer Lawrence, kept his speech short and sweet. He wrote on Instagram later, “I am over the moon. … This moment celebrates a life-long journey of following my passion,” and thanked Gomez for “always being there for us.” Also at their dinner table to show support was Gomez’s fashion stylist Kate Young. 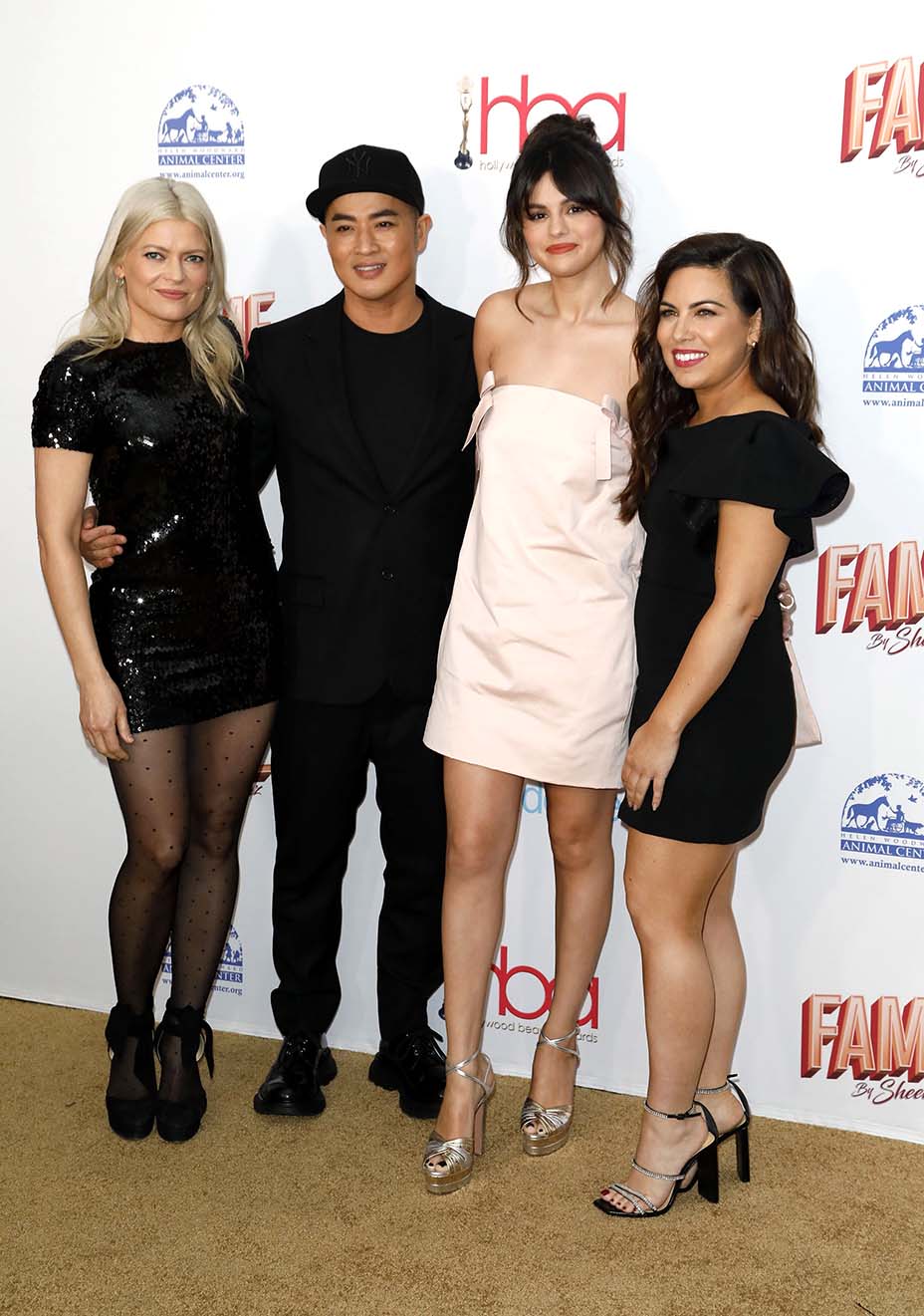 Kelly Clarkson made a surprise appearance when she came to accept the styling award on behalf of her fashion guru, Candice Lambert, who had a family emergency and couldn’t attend. Clarkson ran up on stage when Lambert’s name was called and started crying throughout her speech.

Clarkson explained that she found this out that morning that Lambert couldn’t attend: “I’m really glad I ran from work and got here within 30 minutes to do this for her, because she’s super special and I didn’t want this moment to pass and y’all not to know how to unbelievably talented she is and the fact that she chose to go to her family instead of enjoy this moment for herself.”

The Voice judge continued, “She’s very, very talented. She’s very good at finding out who you are as an artist. … We’re both Texas girls and this is definitely not my usual scene. I used to make fun of that.” 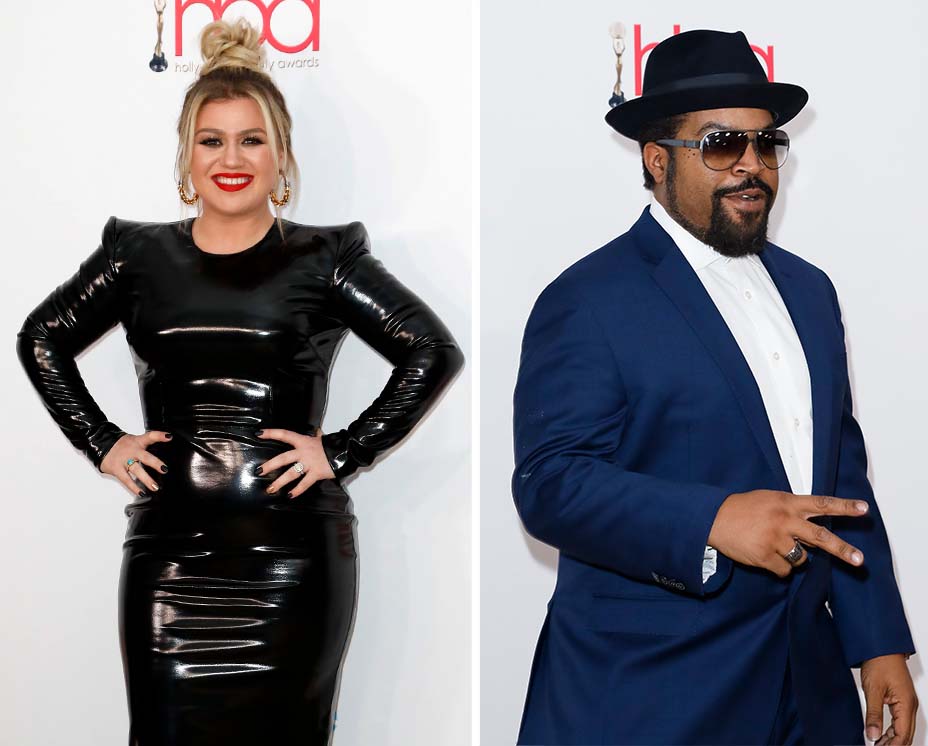 Leslie Mann came to give The Irishman and Devil Wears Prada makeup artist Nicki Ledermann the outstanding achievement award. This season, Ledermann is Oscar-nominated for Joker.

Mann delved into a personal anecdote about Ledermann’s compassion on set while filming The Other Woman (2014). The producers decided they wanted Mann to be a redhead, so they sent her to a salon to get a red tint on her blonde hair.

“It did not go well. What they gave me was hot yellow/orange roots with bright red ends and a few bald patches,” Mann explained. “Afterwards I was crying. … Sometimes actors can get emotional. It’s pretty rare. … I cried for five to seven hours and Nicki saw me. She came over and she hugged me really hard and she made me feel like I wasn’t alone. … She told me that the lighting was really bad in the trailer and promised that it wouldn’t look that bad in normal light. I knew she was lying, but she made me feel better and from that moment on, I realized that we would be lifelong friends.”

Mann praised Ledermann’s artistry in Joker by joking, “When I saw the terrifying look that she created for The Joker, I was blown away and then honored at how I looked that day that I was crying for five to seven hours had inspired so much creativity.”

While the actress said Ledermann is the best at her craft — “sometimes we get lucky and you meet someone and you realize they are the best, like John Williams for music” — Mann also hesitated to praise her too much because “everyone is going to want to hire her and then she won’t be available to work with me. So I’d like to add that she fucked up my face a bunch of times. She’s burned me. She poked me in the eye and it bled. … Sometimes she doesn’t show up for work, so I wouldn’t hire her if I was you.”

Ledermann got on the stage laughing, before reflecting on her career. “I came from Germany a long time ago and I have totally lived the American dream, working illegally, having family members to be deported. Lots of stuff, but I can’t believe I’m here today being able to work with these incredible people,” she said. 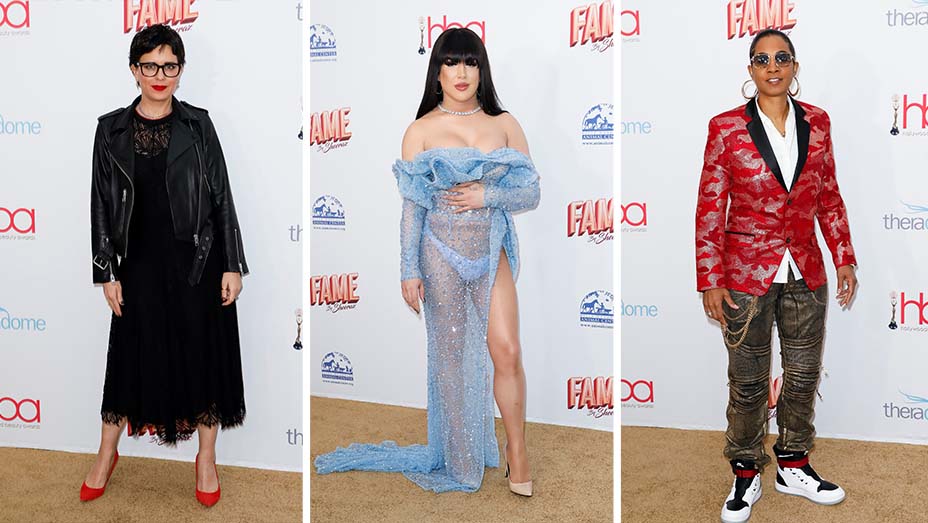 Ice Cube turned up to honor Dolemite Is My Name co-makeup head Debra Denson. “What it would take most makeup artists an hour and a half to do, Debbie can do in five minutes. Trust me, I know,” he said. Anthony Anderson likewise presented Stacey Morris with an achievement in hair award for styling him on Black-ish, with Eddie Murphy for 30 years including on Dolemite is My Name and with stars Diddy, Jamie Foxx, Dwayne Johnson and Tyler Perry.

“I have known Stacey longer than I have known my daughter,” Anderson said on stage. “We met on the street and she grabbed my chubby cheeks and said, ‘You need to let me cut your hair.’ I thought she was flirting with me. It’s been close to 30 years that Stacey and I have forged a friendship.” He added, “She’s not only a barber, she’s a confidant, she’s a friend, she’s a psychiatrist, she’s a wingman slash wingwoman. She’s all the things you need in your life.”