For #Phoebephiles still reeling from the new Hedi Slimane era at Celine, Valentino designer Pierpaolo Piccioli’s spring 2019 show was balm for the soul.

During his solo tenure at Valentino, Piccioli has developed his own female-first approach to fashion, creating for the house a distinct brand of humble luxury, which was expressed beautifully in his latest outing, setting the tone for several shows this weekend that sold values, not trends. 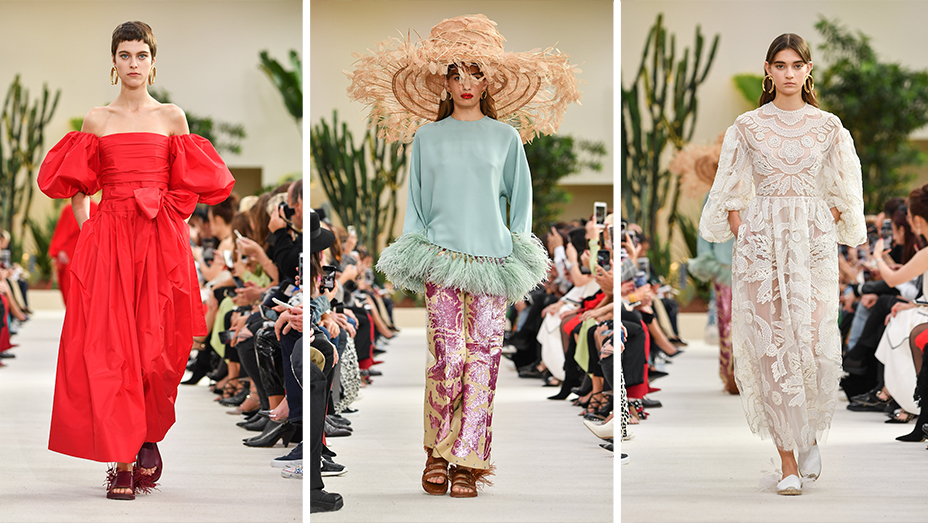 With a mane of gray hair and very little makeup, the first model out of the gate flew the flag for age inclusivity in fashion that has gradually come to define Piccioli, who famously dressed fashion-averse, best-actress winner Frances McDormand for the Oscars last year in one of his modest, elegant red-carpet looks. The model could have been her, wearing a beautiful, billowy black gown enveloping her in chic that was reminiscent also of Tracee Ellis Ross’ voluminous Emmys gown.

The message of practicality continued through the first series of all-black looks — something for everyone — from a do-if-you-dare, plunge-front pleated gown to a sleeveless top tied at the neck, paired with cigarette pants, to a pair of black lace PJs. To keep things down-to-earth but still fun and fashion, thick-strap beach sandals, espadrilles or tennis shoes came embellished with colorful feather flourishes. 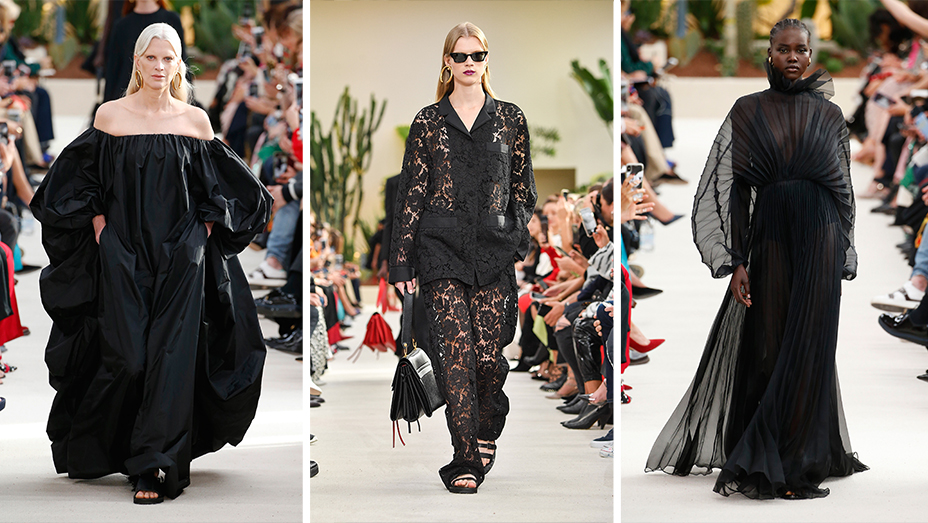 Not all of it was so dark, or modest; Piccioli picked up on his Mediterranean roots for a series of colorful embroidered minidresses, feather-trimmed tunics and pants. All of it felt accessible and friendly, not imposing a look so much as offering options with all women in mind. Piccioli said it this way in the notes: “Freedom to let the Maison be defined by values even before an aesthetic, because what one sees derives from a feeling and if the feeling is true, everything comes together.” 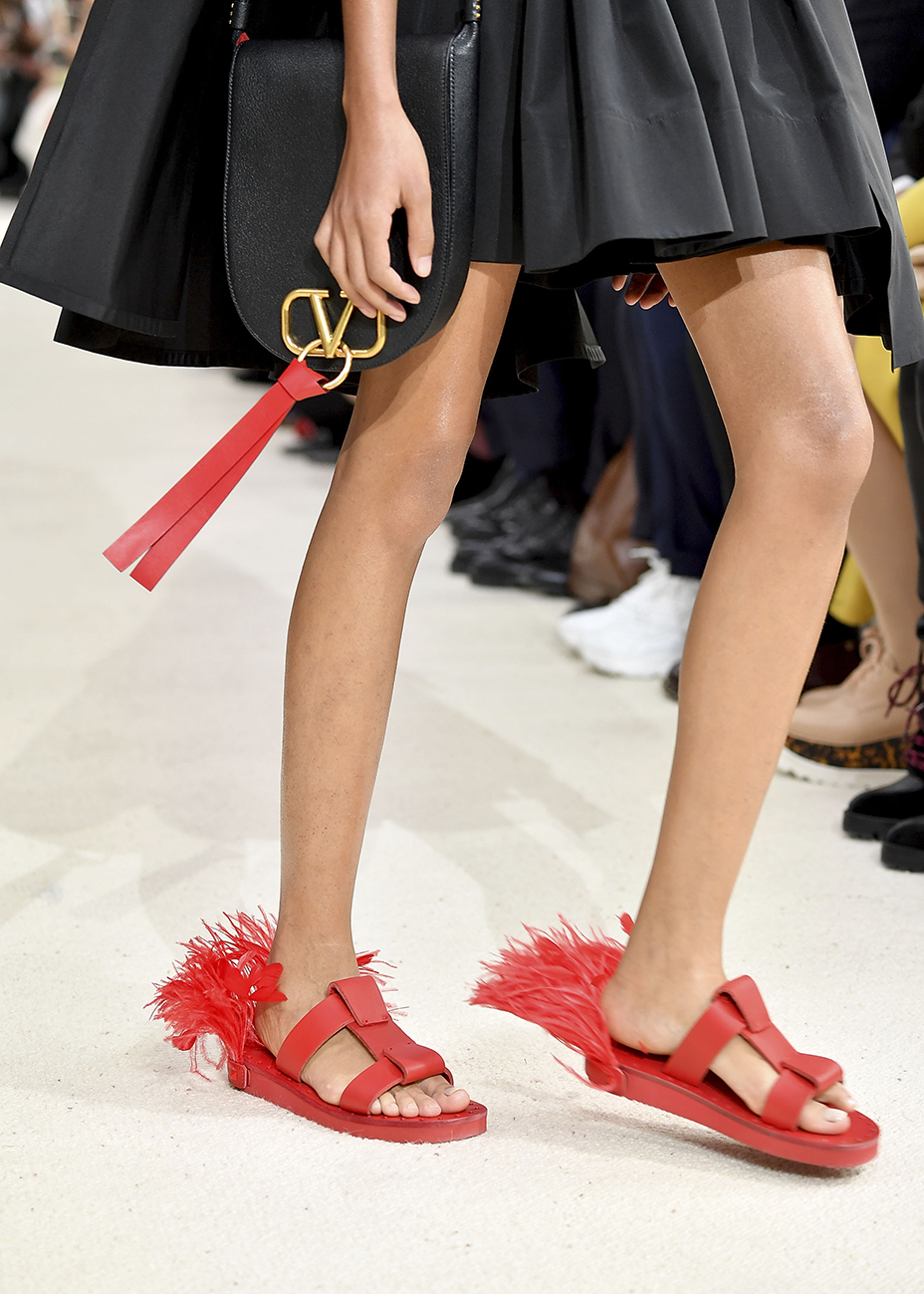 Joseph Altuzarra, has also always embraced a more undone luxury, this season was inspired by summer romances depicted in such films as Call Me by Your Name. 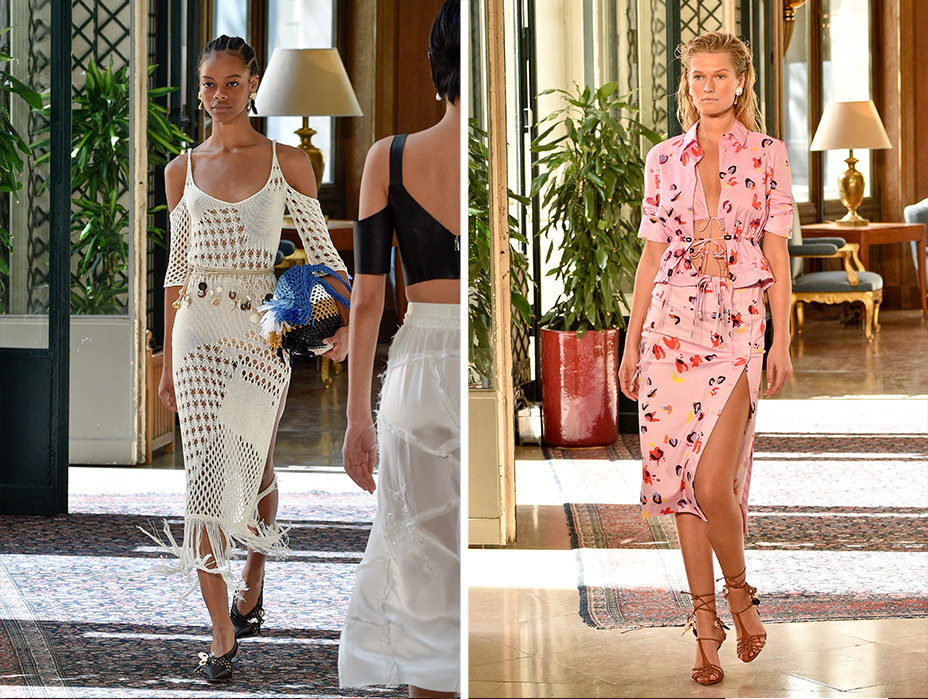 Many of the clothes seemed to embrace a state of deshabille by design: the first three floral slip skirts, for example, worn with cropped, close-fitting cardigan jackets, barely covering triangle-shaped tops evoking bikinis. 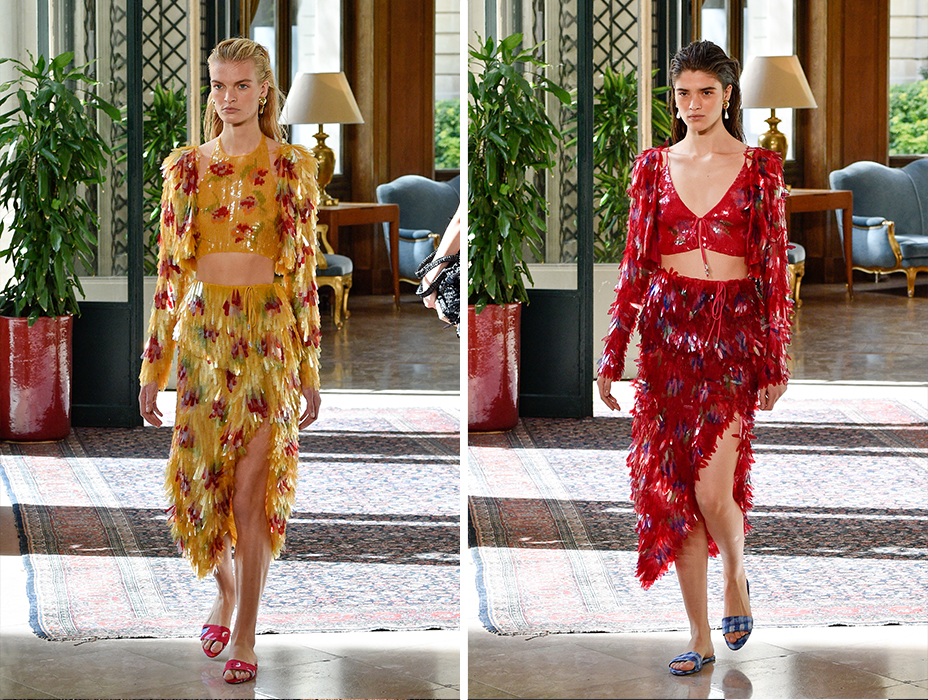 Long, lean gingham jersey jackets and pants, peekaboo crochet dresses, some dotted with shells, and floral embroidered, sequined keyhole dresses exposing tanned abs rounded out the sexy, seaside vision, which included its own moment of inclusive casting: a model with beaded braids down to her waist. 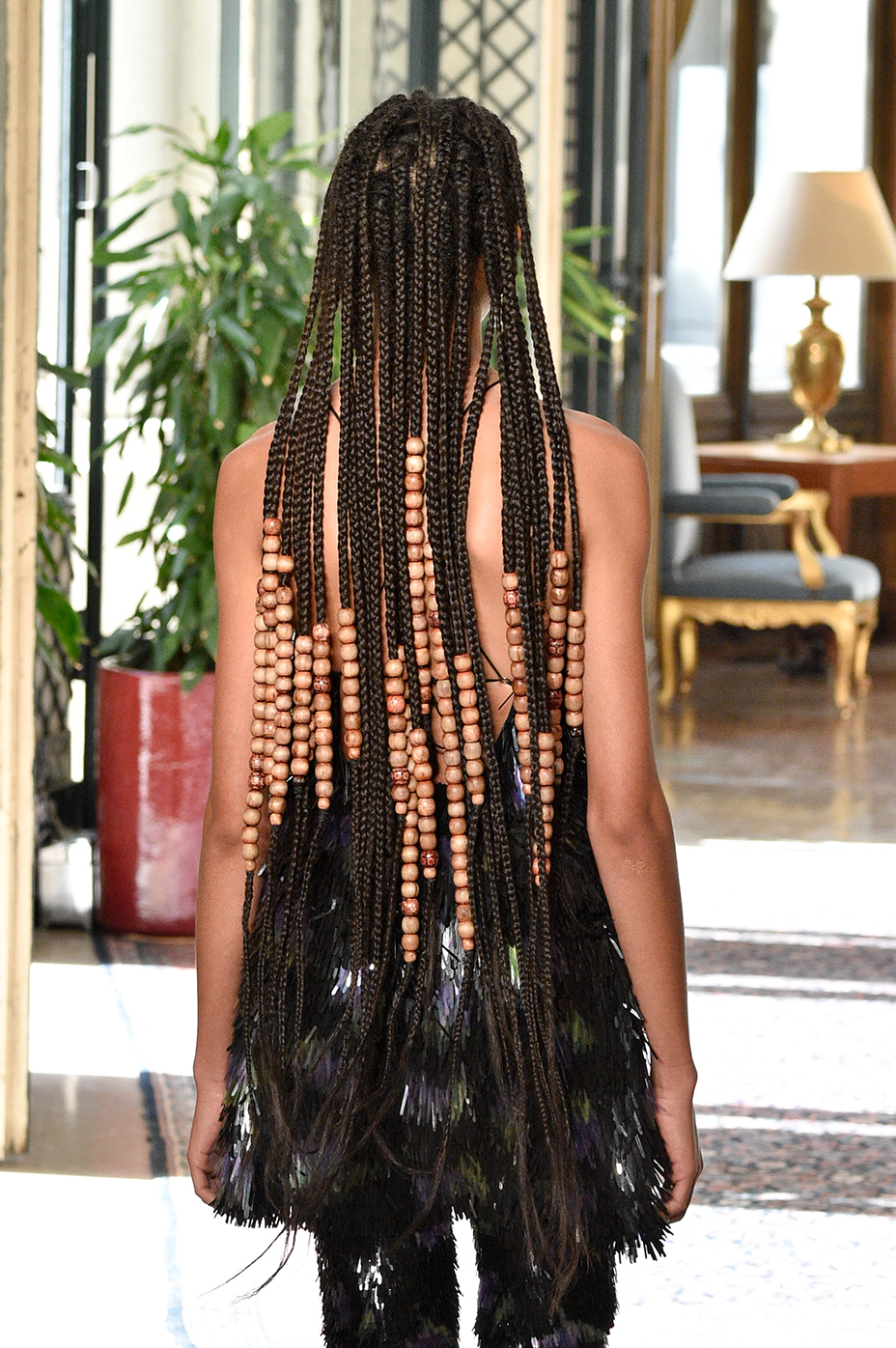 There is nothing subtle about a Thom Browne show. The American designer could be likened to a ringmaster, inviting guests to step right up and see his amazing feats of stitching, millinery and makeup. This season, he created a beach set, complete with lifeguard stations and striped cabanas, for his near couture-clad women to stroll. Living garden gnomes set the scene, doling out fresh flowers to grinning front-row fashionistas, then the models came out in one jaw-dropping creation after another. (Where does Browne get it all? The man is a font of creativity.) 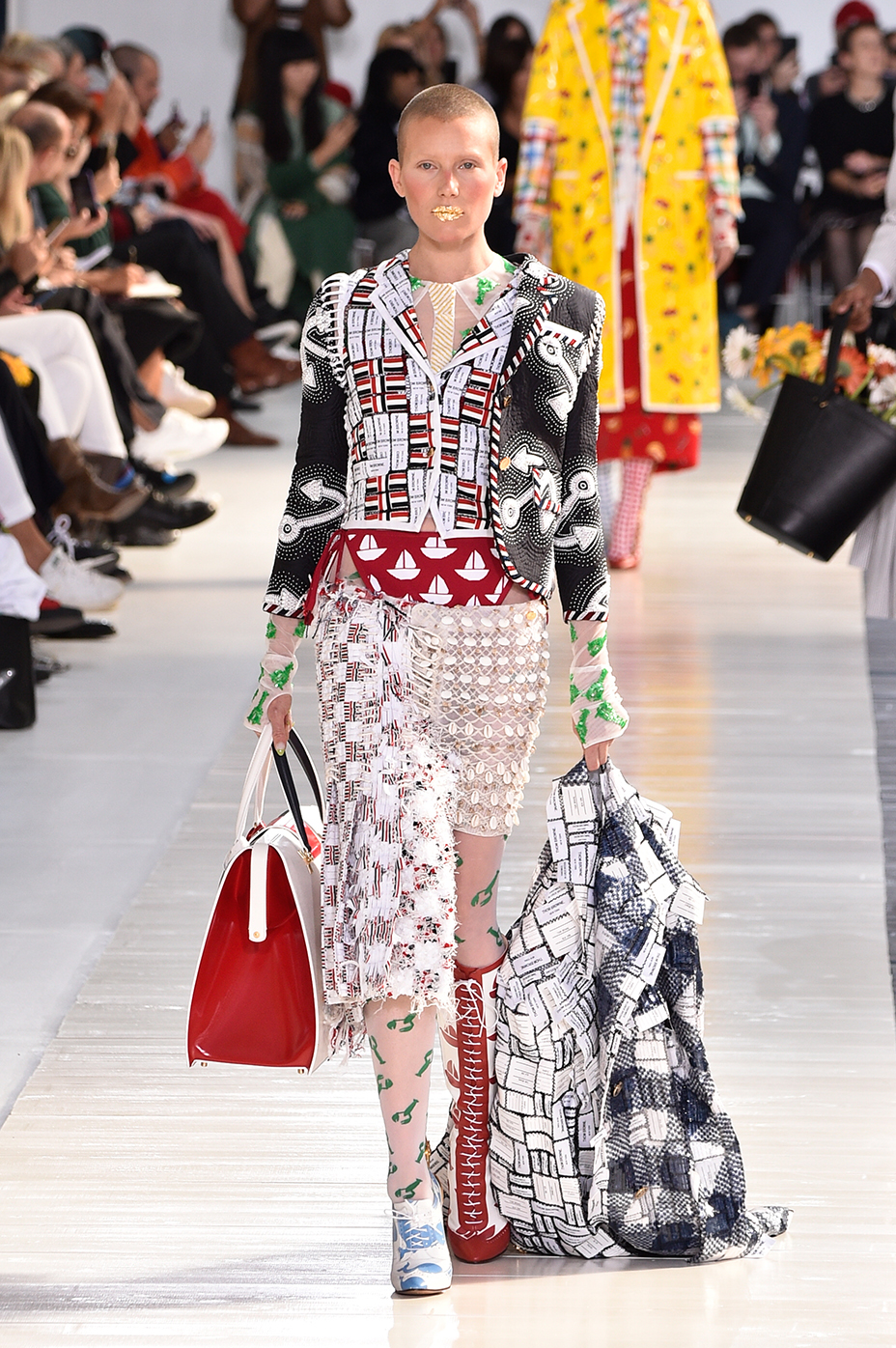 There was a mermaid in gold embroidery and tulle, a dress with lobster-claw sleeves caught in a net, and a woman wearing a face mask squashed with an ice cream cone. You see, Browne’s vision of the beach was summer-fun, but also a bit sinister. 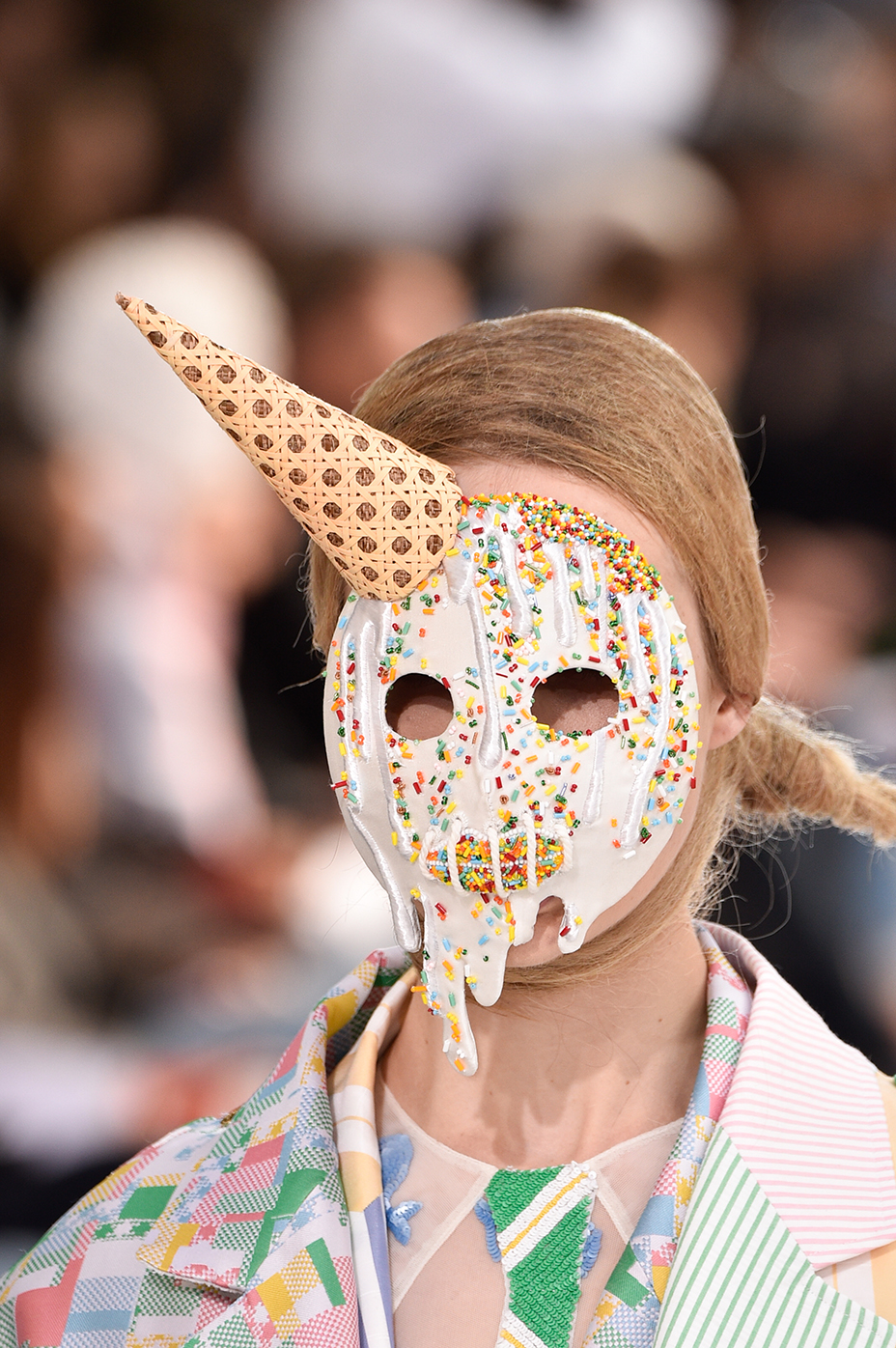 The models walked slowly so everyone could take in the extraordinary details and appreciate that Browne is the kind of designer who will go the extra mile, over-embroidering a zany anchor print with pearls, or weaving fur into summer stripes just ’cause. 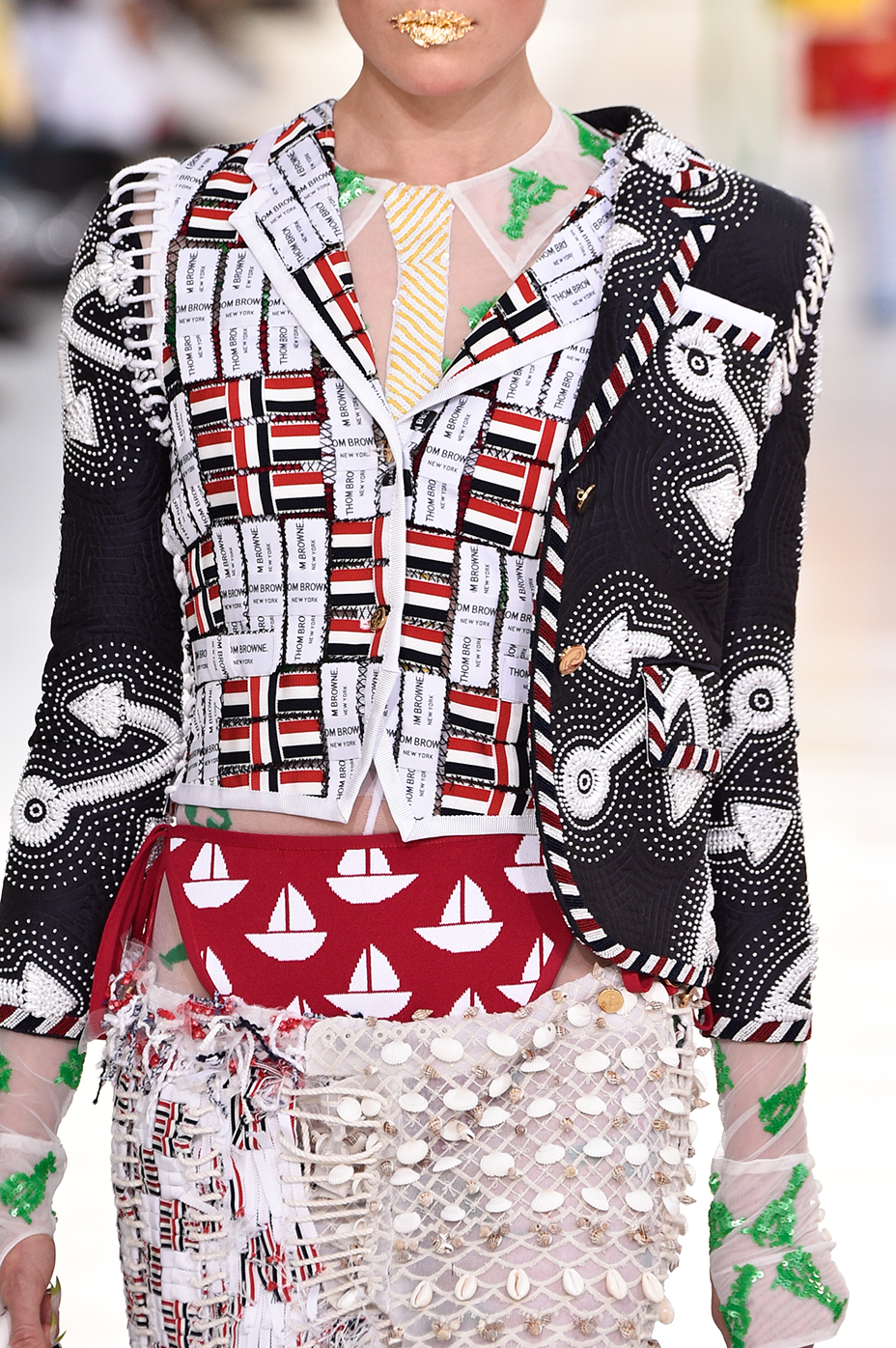 That’s the level of craft Thom Browne customers are buying into, even if they are just snapping up a polo shirt with his signature red, white and blue ribbon-tab collar detail, or a whale-shaped leather handbag that puts a twist on a preppy icon. It’s also why his brand was just snapped up by Italian tailoring stalwart Zegna Group with a valuation of a half-billion dollars. Values translate into value. 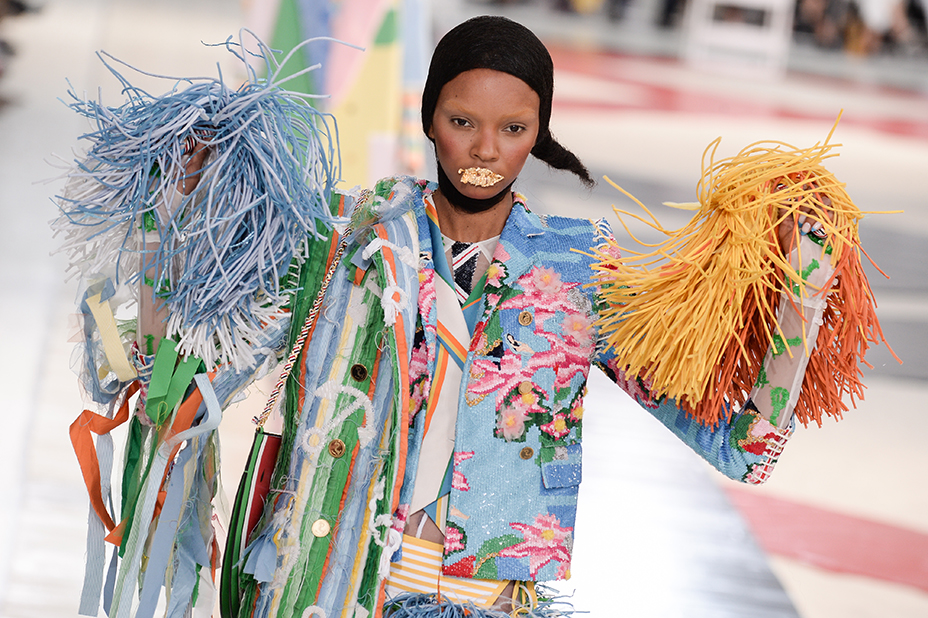