Continue to The Hollywood Reporter SKIP AD
You will be redirected back to your article in seconds
Skip to main content
July 5, 2017 8:08pm

With Sofia Coppola and Brie Larson in the audience, Valentino designer Pierpaolo PIccioli took us to the church of couture Wednesday, presenting one of the best collections of the week.

Stunning in its simplicity and its modesty, as several collections have been this couture season (a few of the Valentino styles, including capes and hooded robes, actually resembled liturgical garb), the designer’s Fall 2017 offering reaffirmed the tradition of haute couture, the made-to-measure, handcrafted art form that is the fashion equivalent of the slow food movement. 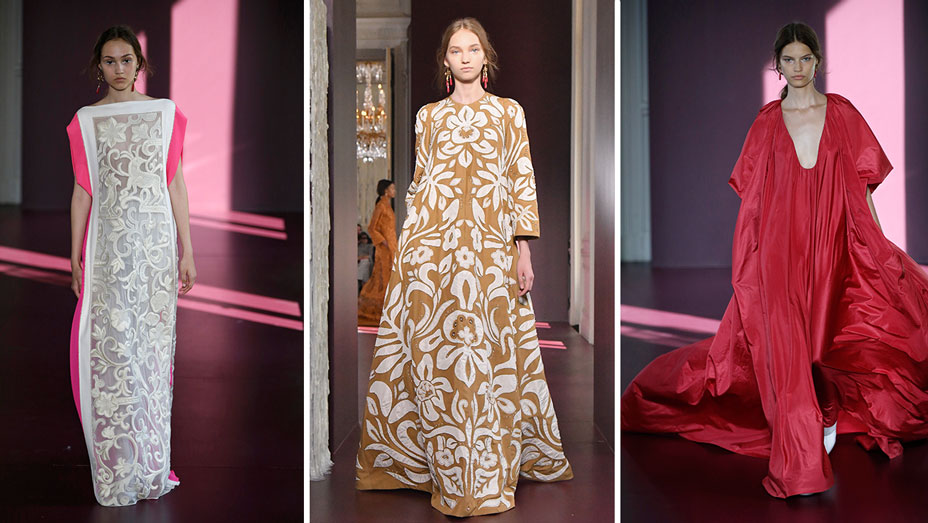 By chance, I happened to arrive late to the show, so I caught the collection from backstage, where I got to see up close the extraordinary craftsmanship on each look (a beige, yellow and pink dress inlayed with mink fur, for example, and an orange long-sleeve dress embroidered with taffeta, baroque pearls and gold thread), as well as the pride of the atelier workers who were delicately fluffing dress trains and delinting coats up until the second the models walked out onto the runway. 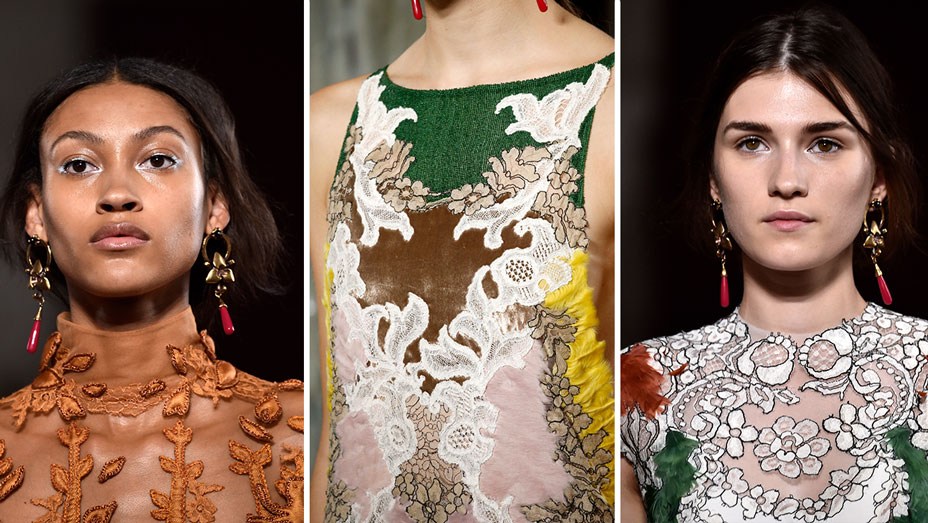 “The authentic value of haute couture cannot be visible,” Piccioli wrote in his show notes. “It’s sacred…rituals that repeat, gestures that exalt.” The serious silhouettes and concept could have translated into something heavy-handed, but Piccioli kept it light and modern with a raspberry pink balloon-sleeve gown with an airy voluminous train, and an expertly color-blocked ensemble of pink full pants and a caramel cape.

The collection achieved something that was classic and new at the same time, but above all luxurious in a personal way that’s not just about propping up a brand name. It was a coup for the designer — and for his dedicated petites mains, as they call them in French, the craftspeople who make it all a reality. 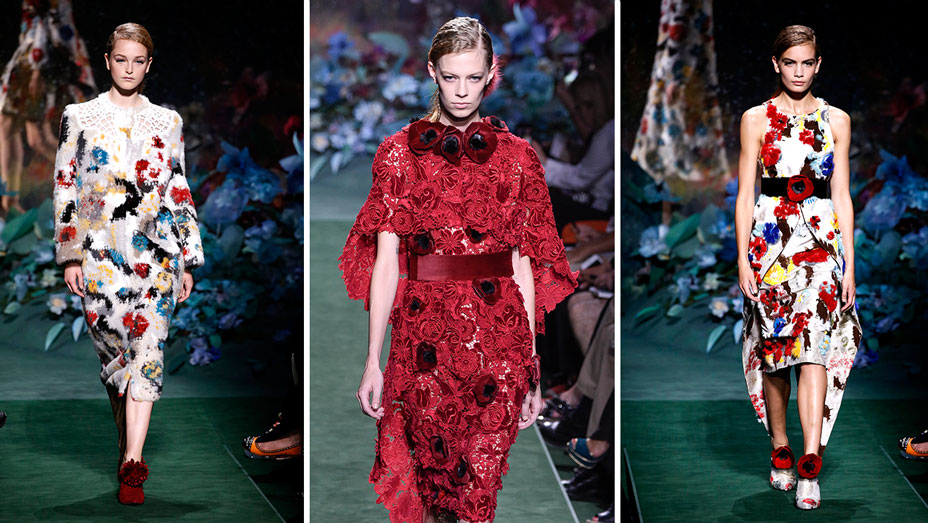 Exquisite workmanship was also on display at Fendi, in what could be designer Karl Lagerfeld’s final runway show for the house. (From his three runway bows, it sure seemed that way.) The Italian furrier hosted its show at a theater, with Coppola (who was there to support the Fendi family whom she relates to in her “Italianness,” she said), Isabelle Huppert, L.A. socialite Christine Chiu and more in the seats.

Embroidered with flowers that were barely recognizable as being made from fur, dresses and coats were blooming with pattern and texture, while other pieces were made of fur knit as fine as cashmere. It was a folkloric garden of delights, especially the opening look, a red knitted fur cape dress covered in roses. What a way to bow out, if Lagerfeld were bowing out. Pure joy. 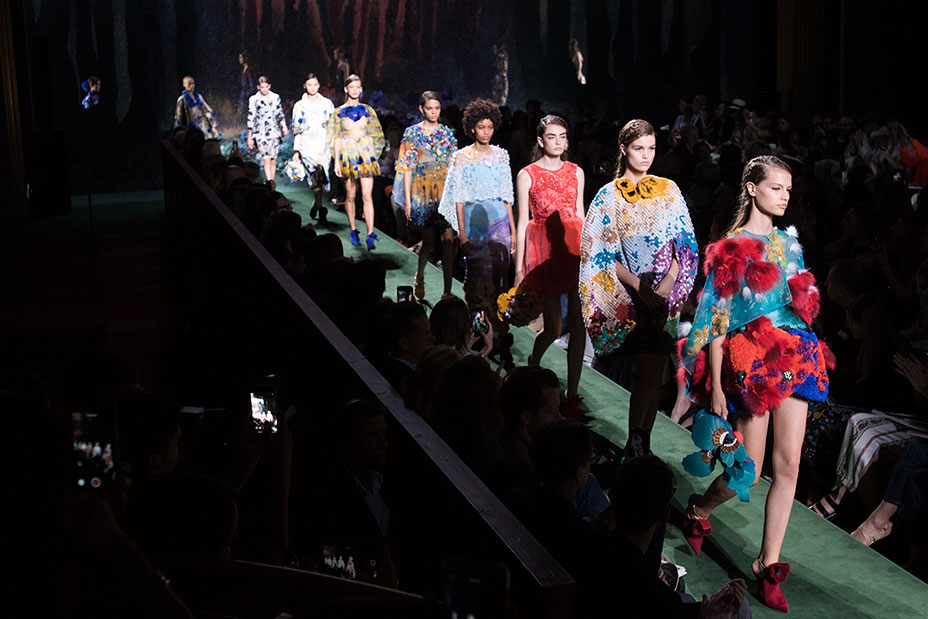 Elsewhere on the runways Wednesday, the glamour was more conspicuous, namely the red-carpet bonanza that was the blush-toned, ostrich feather trimmed Zuhair Murad show. There was plenty for starlets and royals alike to love, including caped gowns, dresses with feather-trimmed tiered skirts, sheer embroidered bodices, tulle collars and more. 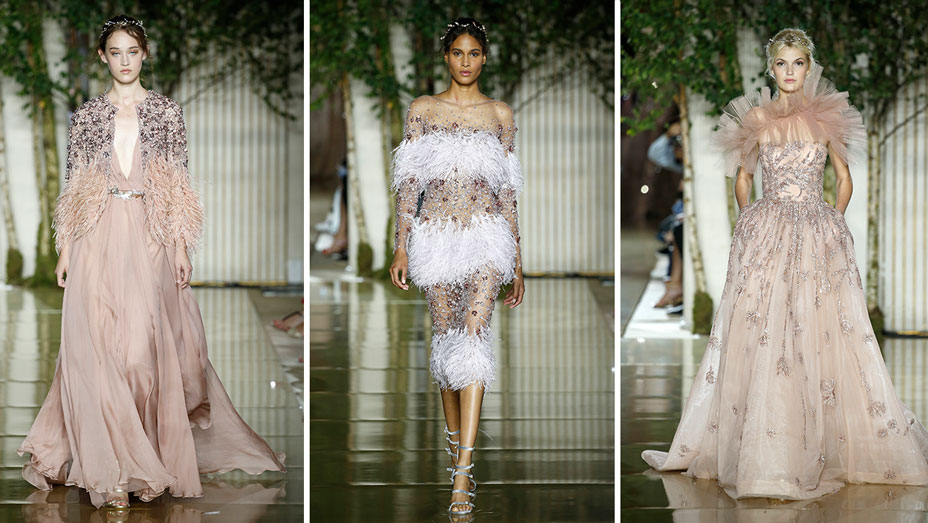 At Elie Saab, the look was very Game of Thrones. Models wore plunge-front gowns with long sleeves, lavish coats and capes covered in golden filigree-like embroidery, pearls, sequins and feathers. If it sounds like a medieval fairy tale, it looked like one, too, but these were no damsels in distress. These were females empowered, warrior queens. Because even in the land of couture, women today need armor. 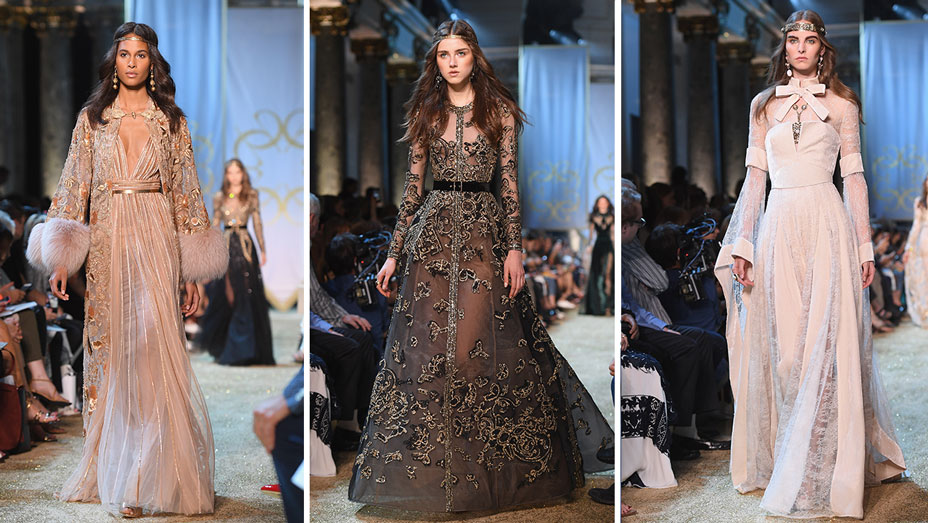