Harrier has been stealing the show on the step-and-repeat during the film’s photocalls and promos, wearing a pink Prabal Gurung dress with a peek-a-boo cutout and button details one night, and a matching gingham peplum top and pants from Brock Collection soon after. At the film’s L.A. premiere Wednesday, she turned heads in a Calvin Klein by Appointment crimson velvet long-sleeve gown. 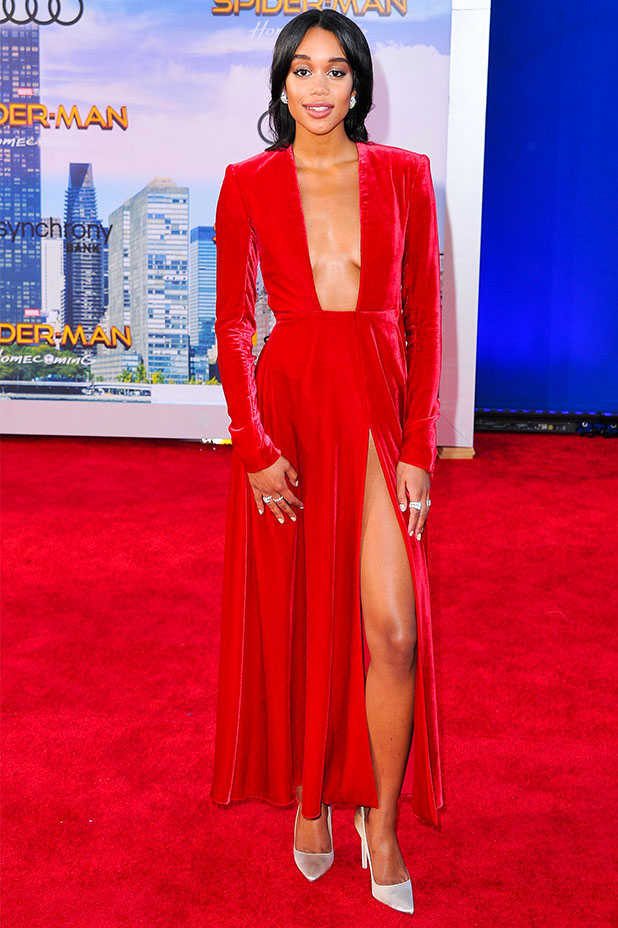 Harrier’s easygoing yet sophisticated style is thanks in part to stylist Danielle Nachmani, who’s worked with the Olsen twins and Lake Bell in the past.

Knowing Spider-Man: Homecoming would be Harrier’ first significant press tour, Nachmani tells The Hollywood Reporter that the duo felt it was important to set a foundation.

“Really early on, we set a lot of goals because she is a new face. It’s really rare that you work with an actress in a film of this level that no one’s ever seen before, so we felt there was a real opportunity to set a tone,” explains Nachmani, who actually met Harrier nine years ago when the actress modeled for one of Mary-Kate and Ashley Olsen’s brands.

“We had this really strong idea of effortlessness. It’s not so styled, but rather just recognizing great clothes and making educated decisions with designers,” says the stylist, adding that she had no more than two racks of clothing options for Harrier during the Spider-Man tour. “We’re doing things that are simple but making a bold statement. I don’t think people realize that can happen.”

From their first fitting for Comic-Con, which was done via Skype — Harrier was in Atlanta shooting Spider-Man and Nachmani was in New York — the duo knew they had the makings of a strong stylist-client relationship. (Harrier ended up in a white button-down crop top and loose pants by Edun.)

When they’re together getting ready, Nachmani says they keep things pretty mellow with tunes from SZA (“Her new album is our favorite,” says Nachmani), Solange and Frank Ocean. But when Harrier is out the door, she’ll get amped up with some Migos — look no further than her jamming out to “Bad and Boujee” on her Instagram.

For Nachmani, her favorite look so far has been the Calvin Klein by Appointment dress. “It was a large collaboration between myself, Laura and the Calvin Klein team, and it was just something we had said early on that it would be a dream. The fact that it’s her first movie, first premiere and the biggest designer in the world was on hand to create this incredible moment was just the perfect ending,” she says. It was a full-circle moment for Harrier, whose first-ever fashion show was Raf Simons’ debut Calvin Klein presentation.

Adds Nachmani: “The looks don’t need to be overly [done] — the dress is enough. That’s a big element for us. Obviously there are accessories to enhance it, and the beauty will only help, but at the end of the day, there are really beautiful pieces out there and allowing them to live on their own is something that’s an homage to the designers.”

Next up, Nachmani is working with Harrier for an event with Bulgari on Friday, where she says the actress, will “definitely have a princess moment.”