Continue to The Hollywood Reporter SKIP AD
You will be redirected back to your article in seconds
Skip to main content
July 8, 2019 2:32pm

The Beatles musical messages of peace, love and understanding couldn’t seem more relevant to present times, particularly as the 2020 presidential campaigns kick off. And for the first time in her career, fashion designer Stella McCartney has drawn directly on those messages in her musical heritage for her fall 2019 menswear and pre-fall 2019 womenswear collections. Select pieces in those collections were inspired by George Dunning’s 1968 animated musical Beatles film Yellow Submarine, which celebrated its 50th anniversary last year. (The title song was written by McCartney’s father Paul and John Lennon and was first featured on the Beatles 1966 album Revolver).

On Monday, McCartney has released an even larger 85-piece “All Together Now” collection of apparel and accessories for men, women and children. Her website refers to the collection as “a fun, uplifting and hopeful statement of unity at a time when it feels more important than ever.” The line, ranging from $295 to $6,840, features the film’s psychedelic graphics including yellow submarines and Lucy (in the sky with diamonds, natch) as well as song lyrics such as “All You Need Is Love” on a sweater and “All Together Now”  embroidered on a jean jacket. 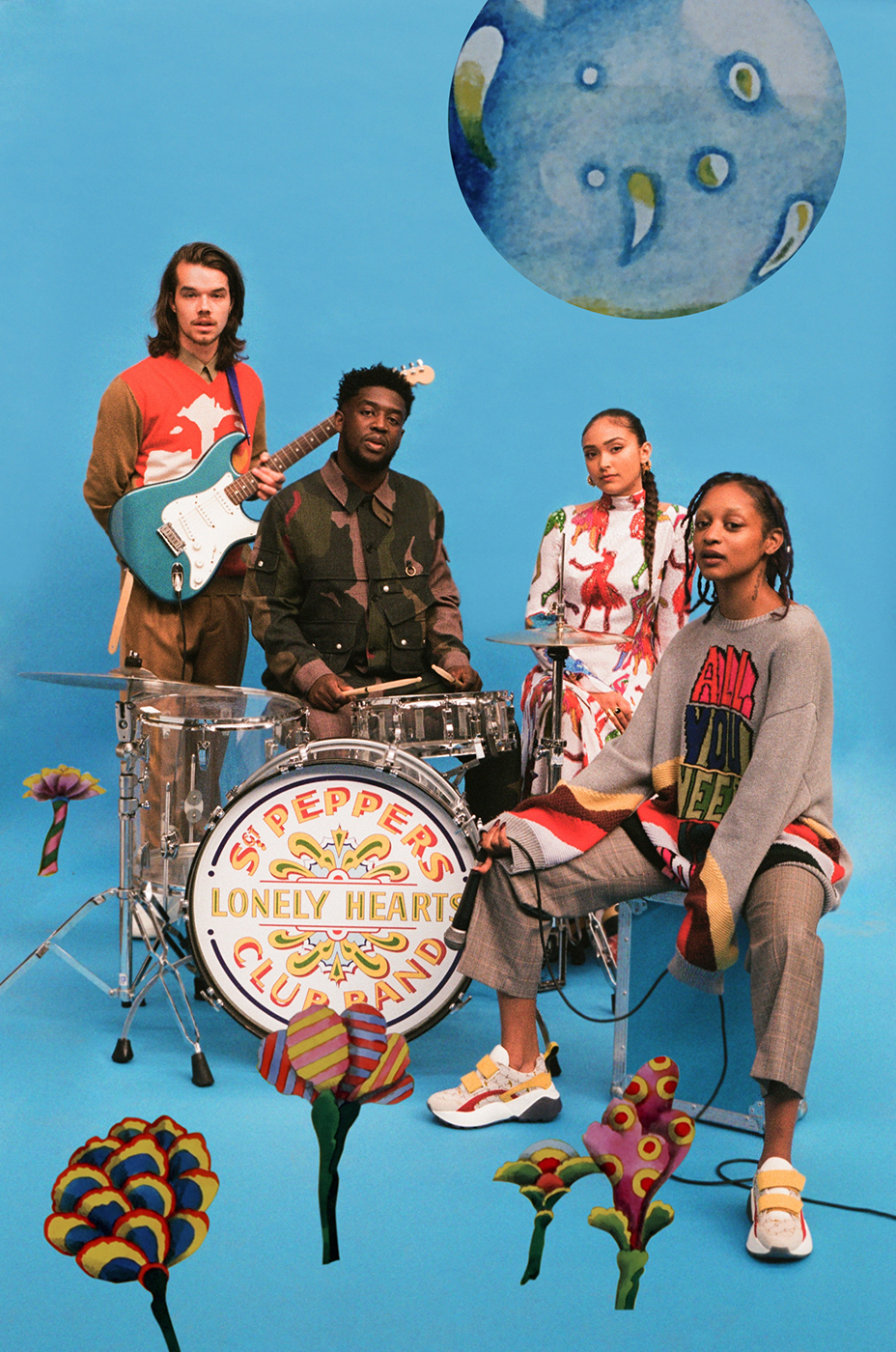 “Last summer I went to a screening of Yellow Submarine and seeing it for the first time since I was young affected me deeply; it blew my mind,” McCartney told The Hollywood Reporter in an exclusive statement. “I started looking at it from a fashion perspective. I felt like it was so modern, and it was for everyone. In my career, in a way, I’ve tried to distance myself from my personal relationship with The Beatles; with it being family, it felt important to do that for many reasons. But it really felt like the time to come together, it was the right time to use that excellent wealth of extraordinary expression.”

“The colors, psychedelia, patterns and prints all hit me hard creatively,” she continued. “There are extreme pieces that are more obvious, brazen and in your face — taking the idea of being in a fan club, having an absolute passion, and translating it into high fashion. And [there are] moments of it [communicated] in a very subtle way, so you would never know it came from Yellow Submarine.” 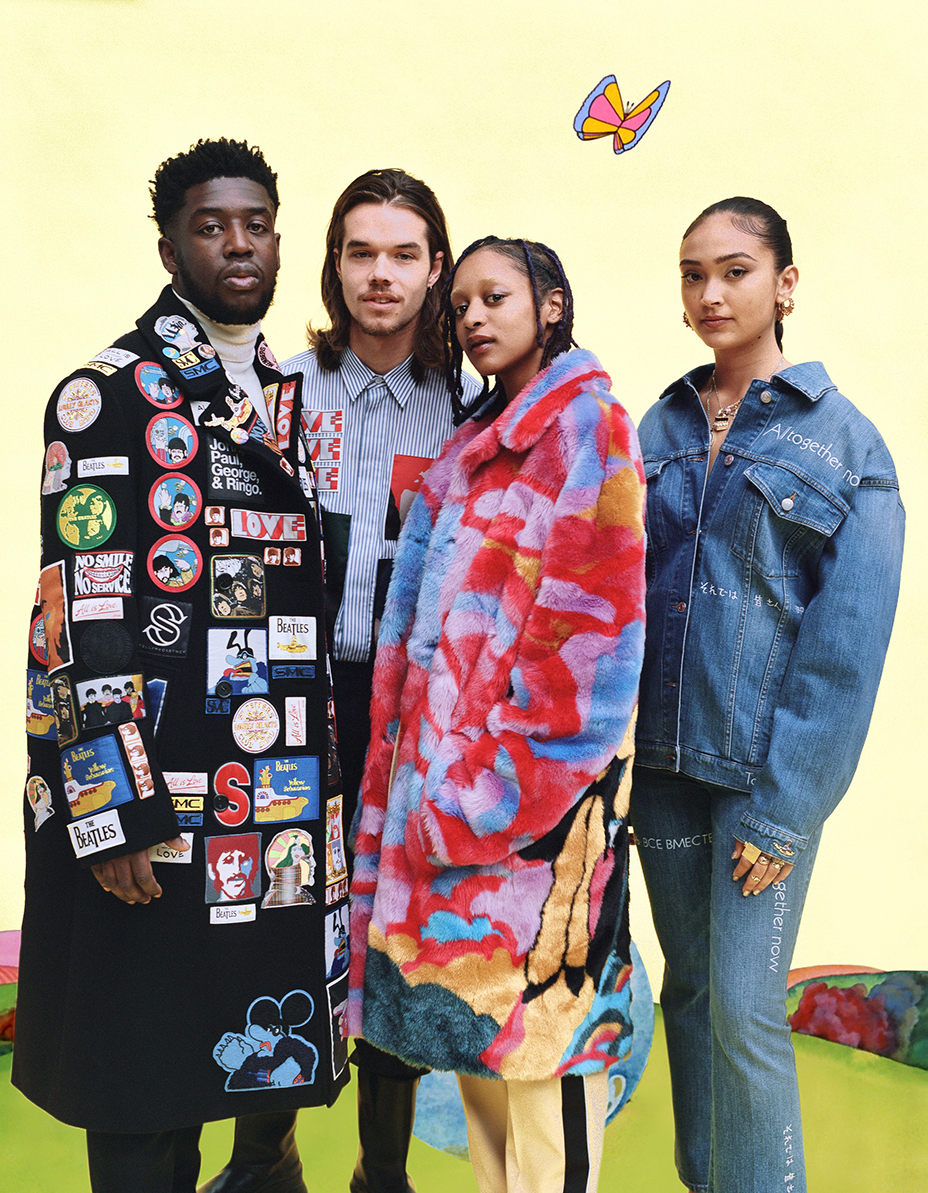 Stars teased the Beatles-themed pieces in advance of Monday’s official debut. Fashion-forward 17-year-old pop star Billie Eilish donned a custom Lucy in the Sky-patterned top with an image of The Beatles emblazoned on the back and matching shorts for her performance at the Glastonbury Festival in England on June 30. Awkwafina stepped out in the printed Leonora dress on June 27 at a photocall for Lulu Wang’s The Farewell in New York City, while Ellie Goulding wore the same dress to the Wireless Festival in London on Sunday. Earlier this year, both Post Malone and Diplo wore a vibrantly colored fur-free fur coat.

The “All Together Now” collection is available at stellamccartney.com and in Stella McCartney stores.

Some behind the scenes pics from CELEBRATE @djkhaled new song/video with a feature from Posty and @travisscott Super magical Beatles coat by @stellamccartneyVideo out now.