The story behind Alexander McQueen designer Sarah Burton’s inspiration for the heavily embroidered metallic dress actress Emily Blunt wore to the Golden Globes is almost as magical as a scene from a Mary Poppins film. “She discovered a book about found Victorian mudlark treasures,” said Jenn Streicher, Blunt’s makeup artist and part of her red carpet prep team. (“Mudlarks” was a moniker given to the children who scoured the muddy banks of the River Thames in London, hoping to make a few pennies selling the trash and treasures found at low tide.) 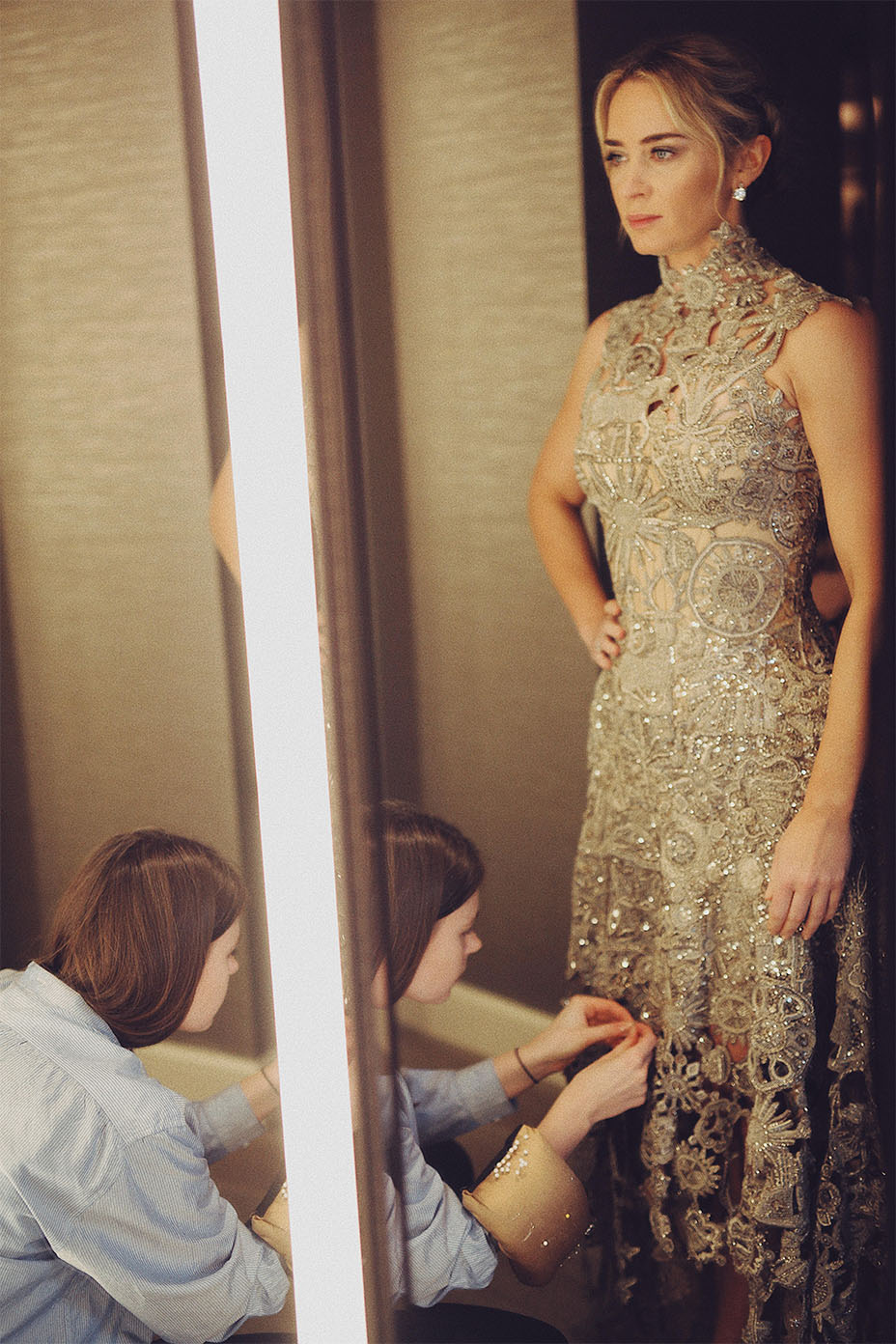 “The dress is an art piece,” said stylist Jessica Paster, who happened onto the custom armor-caged corset dress with a crinoline skirt and the pale silver relic guipure embroideries of medieval flowers, horses, swans and the sun for Blunt to wear to the 76th Annual Golden Globe Awards. “The whole look is very Victorian inspired.”

“We listened to Beyonce while getting her ready,” said Paster. “I always have butterflies in my belly because I want all things to be perfect, but we had done five fittings this time, so we were all pretty calm.”

“The dress definitely inspired the makeup and hair,” said Streicher. “Emily was feeling a whole Joan of Arc vibe from it. It was almost warrior-like because of the sheer weight of it and almost had the feeling of armor.  Emily wanted the makeup to be very minimal and soft. it was all about beautiful skin — glowy and gorgeous with a neutral lip. I created a custom lip color by mixing the pink gloss and beige gloss shades from the Dior Backstage Lip Palette #001 Universal Neutrals.”

“I was surprised she even let me do a silver eye, but I had to get something in there!” said Streicher. “I used a wet brush to sweep Diorshow Mono in 554 Minimalism all across her lids and a little underneath on the lash line and a lot of lashes. I used individual lashes and coated them with Diorshow Maximizer 3d [lash primer]. Then I added a few drops of Dior Capture Youth Intense Serum into the foundation for a fluid application and beautiful glow.”

golden • globes • prep here we we go!! excited to use all these @fredericfekkai products today!!! #goldenglobes #LainiReeves

Hairstylist Lanie Reeves was also channeling the female warrior vibe with her choice of a Dutch braid. “We wanted to create something as textured as the dress. McQueen would always match the texture of the hair to the clothes in his shows, but we needed to do something more suited to real life than the catwalk,” she said. “I wanted the hair to be really thick and full to give the braid some substance, so we put in Frederic Fekkai One to Believe In leave-in conditioner, then blowdried and waved the hair before spraying in some dry shampoo for a next-day feel. Once we braided the hair, we pulled out pieces to create that texture and set it with hairspray.” For a final bit of sparkle, Reeves pinned some vintage Neil Lane diamonds to the back of Blunt’s head before the actress went on her way. 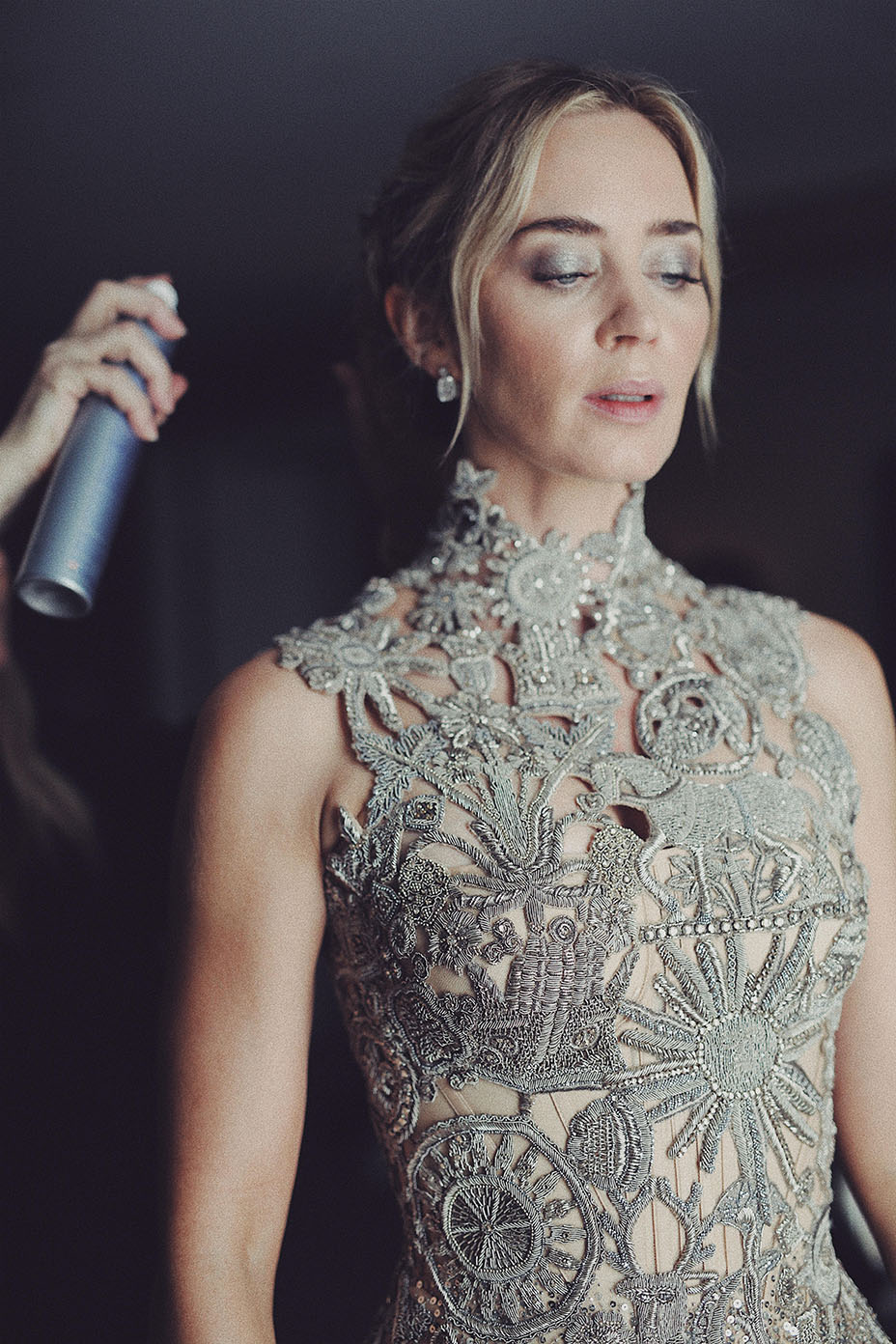