Tamara Mellon co-founded Jimmy Choo in 1996 and helped grow it into the powerhouse brand that was a fixture on Sex and the City and red carpets around the world. With her new namesake, direct-to-consumer shoe brand, founded in 2013, she’s attempting to do it all over again, this time from Los Angeles, where she has a design studio and headquarters employing 23 women and 5 men. She is the author of In My Shoes: A Memoir which details the personal and professional challenges she encountered at Jimmy Choo.

In this guest colum for Equal Pay Day, the female founder reflects on her own experience with the gender pay gap, and this historical moment of female empowerment.

Tamara Mellon Talks About Her New Brand and Her New Life in L.A.

We’re living in an era with no shortage of movements. As a woman and a mother, I can look at #MeToo and Time’s Up and am filled with pride and confidence that the world is changing, moving forward to be more aware of the unconscious biases and conscious actions that women have endured for generations. But these beginnings are just that — starting points for people to own their voices.

I’m a shoe designer, but I always say I care more about the women wearing them. I also believe the days of companies being neutral on issues that matter are over. The same way that revelatory movements like #MeToo and Time’s Up transcend industries to reach critical mass, it’s up to people behind brands to lend a voice to what matters. My career is focused on giving women what they want and supporting what they need — whether it’s the perfect pump or equal pay. My biggest hope is that women who put on my shoes feel empowered, and I honestly believe empowerment starts with equality.

Equality at work has long been a personal issue for me. Twenty-two years ago, I co-founded Jimmy Choo, which became one of the most recognized luxury brands in the world. In my 16 years there, I negotiated three sales of the company to private equity firms. During the second sale, I discovered in the deal paperwork that I was earning less than men I hired. As the Chief Creative Officer and co-founder, my salary was less than comparable C-level positions.

When I took this to the board, I had my first personal remuneration negotiation. Time after time, the private equity firms that held the business, along with the teams I built, denied my request. Their excuse was that I was already rich enough for a woman. 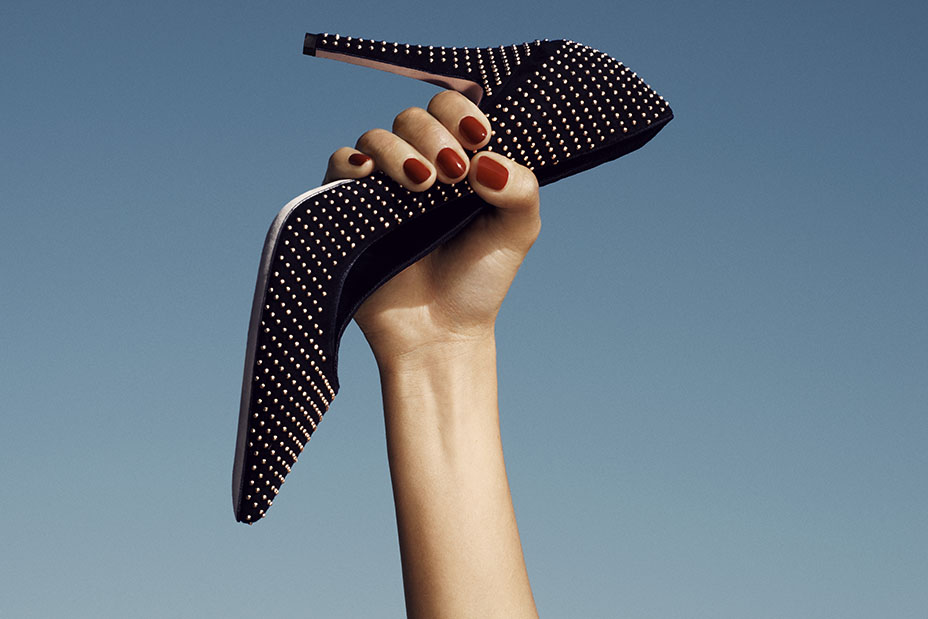 That experience deeply motivated me. I left Jimmy Choo, and with nothing to prove and a lot to lose, set out to do it again. I launched my new namesake label in 2016, and these last two years have been about so much more than beautiful shoes. Inside our small West Hollywood offices, it’s about making the women of Tamara Mellon feel empowered and vested. Each day, we ask ourselves how we can transcend that feeling beyond our office walls to the women of our community.

Last year, we made some bold statements about the pay gap, which is $0.80 on the dollar to men. We shared tips for women to negotiate raises and on Equal Pay Day, we reduced the prices on our website 20 percent to match the gender pay gap. The response from women was overwhelming: we’re all in this together, and should continue to talk about how to solve this. The first step is taking a stand and sharing our stories.

That’s why I, a shoe designer and entrepreneur, am speaking out again about pay disparity on April 10, Equal Pay Day, and I’m reducing my prices by 20 percent to highlight how no progress has been made since last year.

My business is certainly female led, but I don’t hire women because they are women, I hire them because they’re the most qualified candidates for the job. I encourage all of my employees, no matter their age or position, to own their voice and speak up in meetings, or simply if they think we can be doing something better. Equality, and success I might add, comes from giving everyone a chance to own the floor.

I use the phrase “walk the walk” a lot. It’s an idea that’s so meaningful to me. It’s about staying true to your beliefs in the face of fear, even if your opinion is unpopular — especially when it’s unpopular. It’s about taking the road less traveled, marching to the beat of your own drum, and mixing metaphors if you damn well please.

I plan to speak out again next year. I hope that the pay gap is closer to being closed — but I won’t be focusing on that. Instead, next year I’m going to share what I’m going to do: which is to apply practices that close the pay gap on a company level. I believe that putting power in the hands of businesses, especially those for women, by women, will bring actionable change to an issue none of us can afford to ignore.

Talk is cheap, but $0.80 on the dollar is not. I promise to walk the walk for equal pay with my company and the initiatives we activate until it’s a thing of the past. I hope you’ll join me.

Your work is valued at 20% less. Not because it’s worth 20% less, but because women make $0.80 on the dollar to men in our country (according to the Bureau of Labor Statistics). As a brand that’s for women, by women, we’re not going to be neutral on this, because we have a social responsibility to be about more than beautiful shoes. We’re here to stand confidently with you, because knowing that we’re all in it together is the most powerful thing we can do. — Team TM #WomenRule #tmforequalpay