Today, the 15-year-old glossy launches its first-ever digital-only “cover” story since shuttering print last year. The story is now live on its website and various social media properties, from Snapchat to Instagram (and Instagram stories) to Twitter.

The cover package stars the eight women that were chosen as Teen Vogue’s Young Hollywood class of 2018: Awkwafina, Laura Harrier, Margaret Qualley, Storm Reid, Ellie Bamber, Sasha Lane, Letitia Wright and Bria Vinaite. There are nine separate ““covers” — one starring each woman, as well as a group photo cover — that were photographed by Camila Falquez, in addition to video components and animations that are tailored to various social platforms. 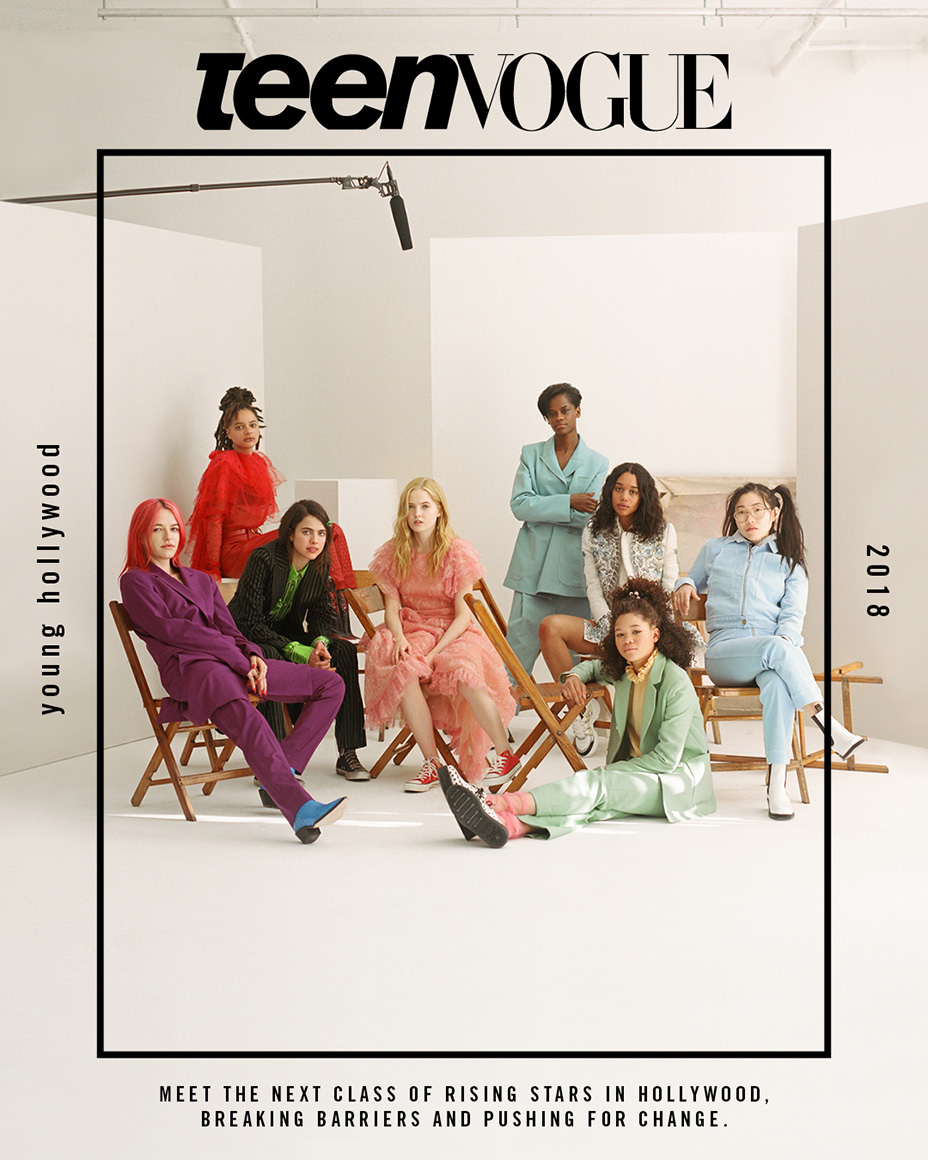 “I don’t think there was much of a challenge, to be honest,” chief content officer Phillip Picardi tells The Hollywood Reporter of making the transition from print cover stories to a digital-only format. “What I’m excited about, especially coming from the digital side of Conde Nast, is the ability to give attention and creative detail to a digital story, and give it the same kind of granular focus that we did to a print story,” he continued. “That attention and that level of respect for the content was not necessarily missing, but it wasn’t being given this much focus.”

Considering Teen Vogue‘s digital presence has buoyed the brand over the past few years, especially as the magazine pivoted to include more political coverage and placed an emphasis on values like diversity, representation and activism, a strictly digital cover story seems natural. Picardi, who launched his Conde Nast career as a digital editor, notes that the robust online team was already cranking out upwards of 35 stories per day; its digital readership peaked at 9 million in July and its Instagram currently boasts more than 2.2 million followers. 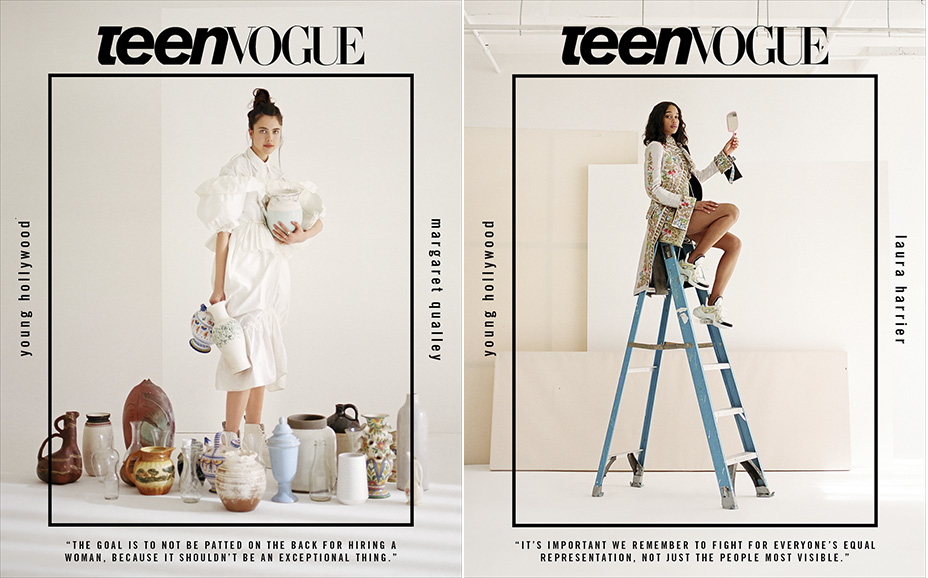 And yet despite glowing reviews of its digital content, the past two years have been rather tumultuous for Teen Vogue as it reconciled with the gap between its print and digital readership. In 2016, the title announced that it would be scaling back its print schedule from a monthly to a quarterly format. In November of last year, the decision was made to scrap print altogether — a move that a handful of other publications, including Nylon and Self, have also made in an effort to cut costs. Shortly thereafter, buzzy editor-in-chief Elaine Welteroth left the brand in January, and Picardi, who was largely credited with Teen Vogue’s digital growth anyway, took the reins.

However, the title is unique in its decision to continue a traditional cover story rollout. (Self has not attempted a digital cover, though online native outlet Bustle has delved into the idea of a “cover” story.) But creative director Marie Suter, who has been with Teen Vogue for the past six years, wasn’t worried about a tarnished Teen Vogue brand, or losing any caché as the glossy evolved to digital-only. “From a creative standpoint, I think what is amazing is seeing the response [to digital-only] with the creatives that we’re working with,” she reassured. “Very big photographers and directors really love the brand and want to be a part of it with or without print.”

At Saint Laurent, the New Le Smoking Is Le Shorts

All that said, the first digital cover story marks yet another first for the Teen Vogue brand: An all-female ensemble for the Young Hollywood franchise (which has traditionally a mix of men and women since the glossy launched in 2003), produced by an all-female creative team. In the cover story, the young stars — who range in age from 14 (Reid) to 29 (Awkwafina) — discuss Hollywood’s Time’s Up movement, proving that the title still very much intends to lean into its role as a political player.

“When it came time for us to do our first digital cover, of course, we were in the midst of awards season, so we spoke about what kind of things and what kinds of people we would want to feature,” noted Picardi of the issue’s theme. The timing of the release, just days away from this Sunday’s Oscars, was no coincidence either.

“What’s even better about this concept being digital-only was that we had time to pull together a shoot and the casting relatively quickly,” he continued. “We could react to what was happening in the news cycle and then produce and publish it right before the Oscars. That’s not something you have the luxury of doing when you work with many print magazines — especially not a quarterly print.” 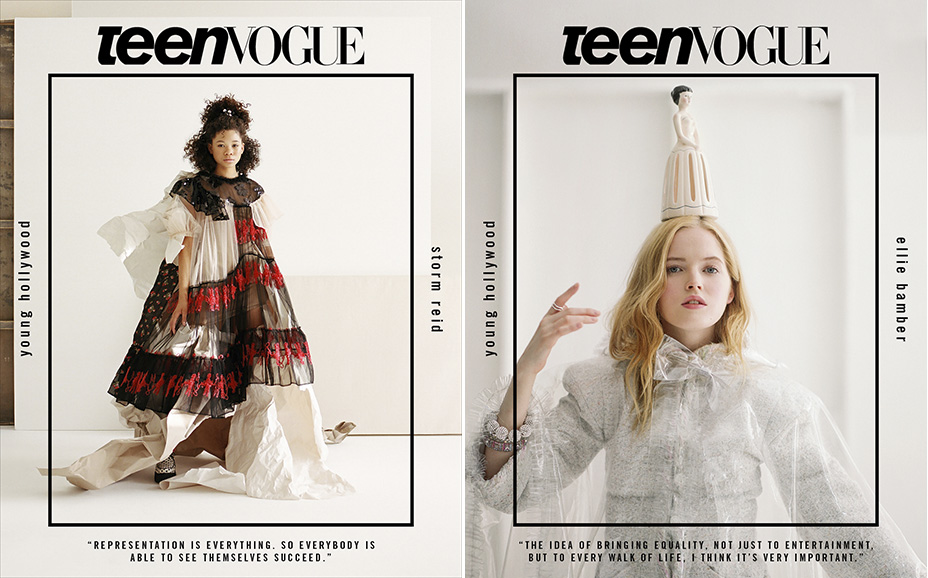 He added, “It was a really great moment to take what’s been seen as more of a contentious issue in Hollywood and see it become something that a bunch of young people came together to celebrate on set with us.”

Moving forward, Picardi and Suter both use the word “freedom” to convey how they feel about the flexibility provided by the digital-first format, be it working with different mediums to playing with the actual publishing timeline. And unlike past cover stories, which have traditionally featured still images young celebrities, the team is toying with the idea of politically focused covers, like a package on the midterm elections, that isn’t necessarily a flat photograph.

“What I’m really excited about is to respond to not just the topic of celebrity, which we’re of course doing with substance for this particular cover story, but also exploring what a cover story could mean for Teen Vogue in the future, whether that means a topic or a news event,” he mused. “[We’re also excited] to explore what these themes mean for us in a more abstract sense, rather than just a personality based sense … and to explore different mediums. You’re looking at photography here, but there’s no saying what the next cover might look or feel like.”