A rapidly changing career trajectory is bringing Canadian-born producer Frank Murray, 40, to the Cannes Film Festival for the first time. With his association with Christine Vachon’s Killer Films, he just wrapped Paul Schrader’s First Reformed and oversaw production of Cannes entry Wonderstruck, a period drama directed by Todd Haynes and starring Julianne Moore and Michelle Williams that will be screened in the main competition. A Cannes producer can expect to have on his or her agenda any of the following occasions to dress for: business meetings, yacht parties, formal galas, world premieres, day photocalls, to start: “I have always been incredibly, insanely busy there with barely a moment to breathe, says 27-year Cannes-goer Mike Goodridge, CEO of Protagonist Pictures. Adds Pascal Borno, president of Conquistador Entertainment, who is bringing the Arnold Schwarzenegger-narrated Cousteau family doc Wonders of the Sea 3D to the fest: “Unfortunately you need to bring a lot of clothes if you’re going to be in the party circuit.” And amid the industry veterans and jostle of celebrities vying for attention off of the fabled French Riviera, no newcomer would want to miss the subtle style cues that are as important as any business proposition. “Fashion-wise, I go over [there] with a measure of anxiety,” says Murray.

That may be because his personal style doesn’t quite match the usual perceptions of red carpet brio. It references a lifelong appreciation of motorcycle gear, with a daily uniform that includes a European-style “cafe racer” leather jacket, a selection from his counterculture T-shirt collection and jeans, often worn with Korean War combat boots. “Part of what attracted people like Christine to me is because she’s also uncompromising,” says Murray, recalling how during 2015’s Flatgate controversy, Vachon was famously refused entry to a Palais screening for wearing combat boots instead of Cannes-mandated heels. 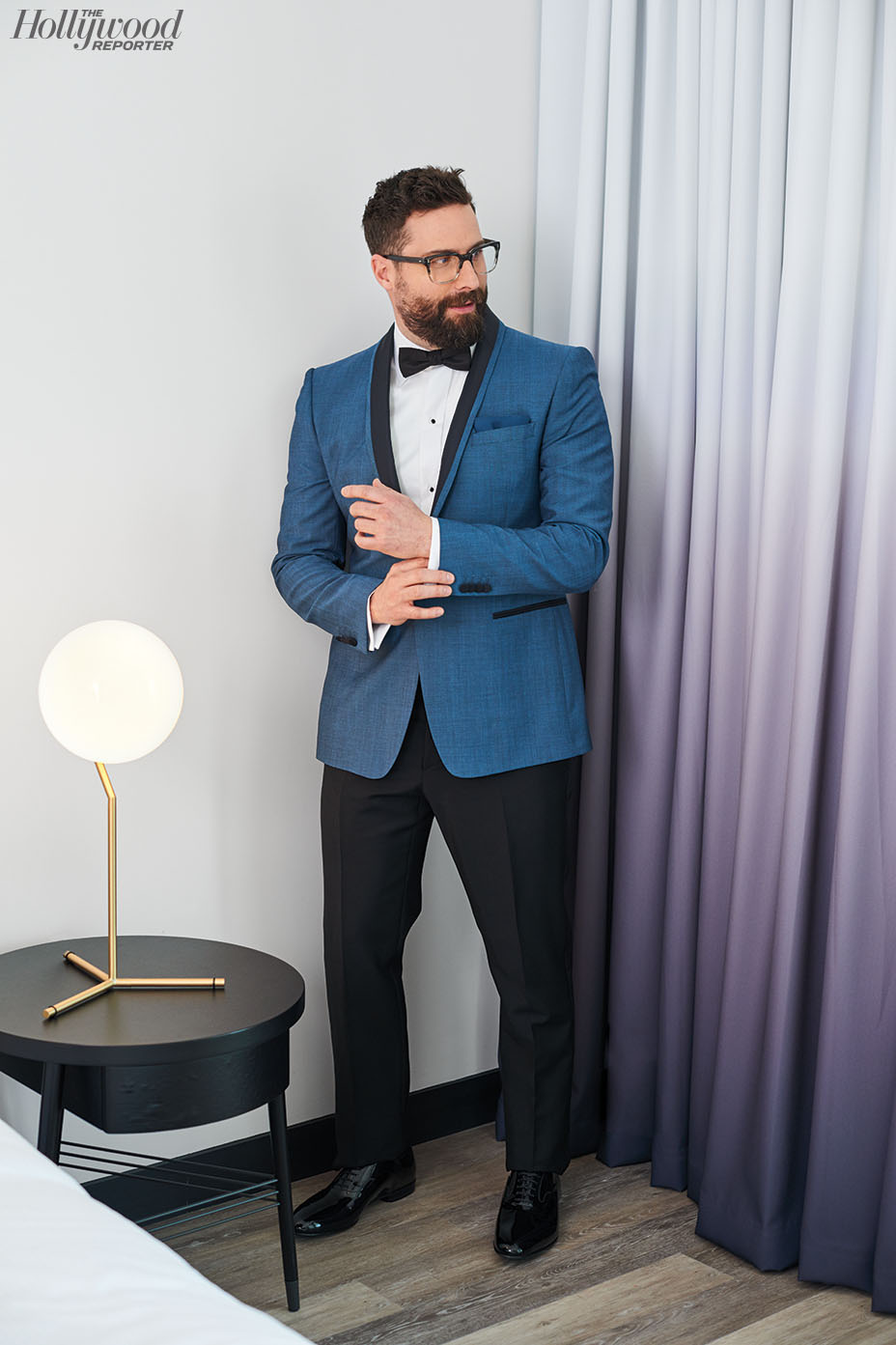 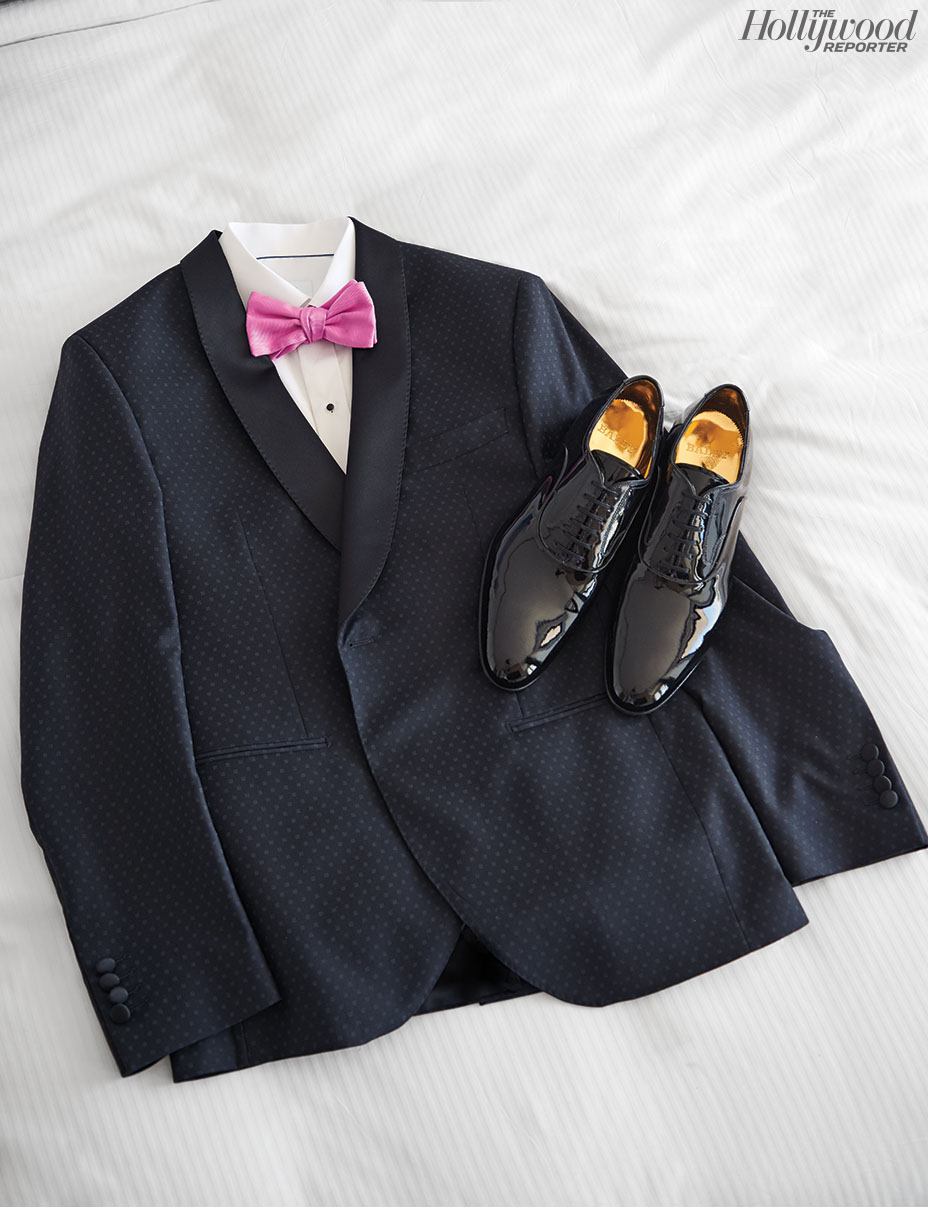 To help Murray translate his rugged outlook to the Croisette, THR enlisted longtime men’s stylist Michael Fisher, who dresses Hugh Jackman, Orlando Bloom and The Big Short director Adam McKay and will be outfitting Dustin Hoffman at Cannes this year. “Dustin Hoffman has a legacy, and I want people to see him and not the clothes,” says NYC-based Fisher of outfitting the star of Noah Baumbach’s The Meyerowitz Stories for a full Cannes slate that includes the premiere, a luncheon, photocalls and the amfAR benefit gala, which Hoffman and his wife, Lisa, are chairing this year. “Frank is just starting his journey, so he needs people to take notice, to say, ‘Who is that guy?’ ” says Fisher.

Competition screenings are black tie, so Fisher and Murray considered several options, then alighted on a teal silk dinner jacket from Jeffrey Rudes. “You would usually see me lean toward a standard black tux because those afford you a measure of anonymity at those events,” says Murray, “but that color was too cool to pass up.” Dinner jackets are customarily worn in resort settings and have gained renewed popularity in recent seasons, both in white and intensely colored versions. “Everyone knows what a tuxedo should look like, and it’s nice to push that envelope in a less typical way,” says Fisher. “Rudes does a more modern take, with a skinnier lapel and a European sensibility.” The rest of the ensemble is classic black tie, with a formal shirt, black bow tie and trousers and simple patent lace-ups from Bally. 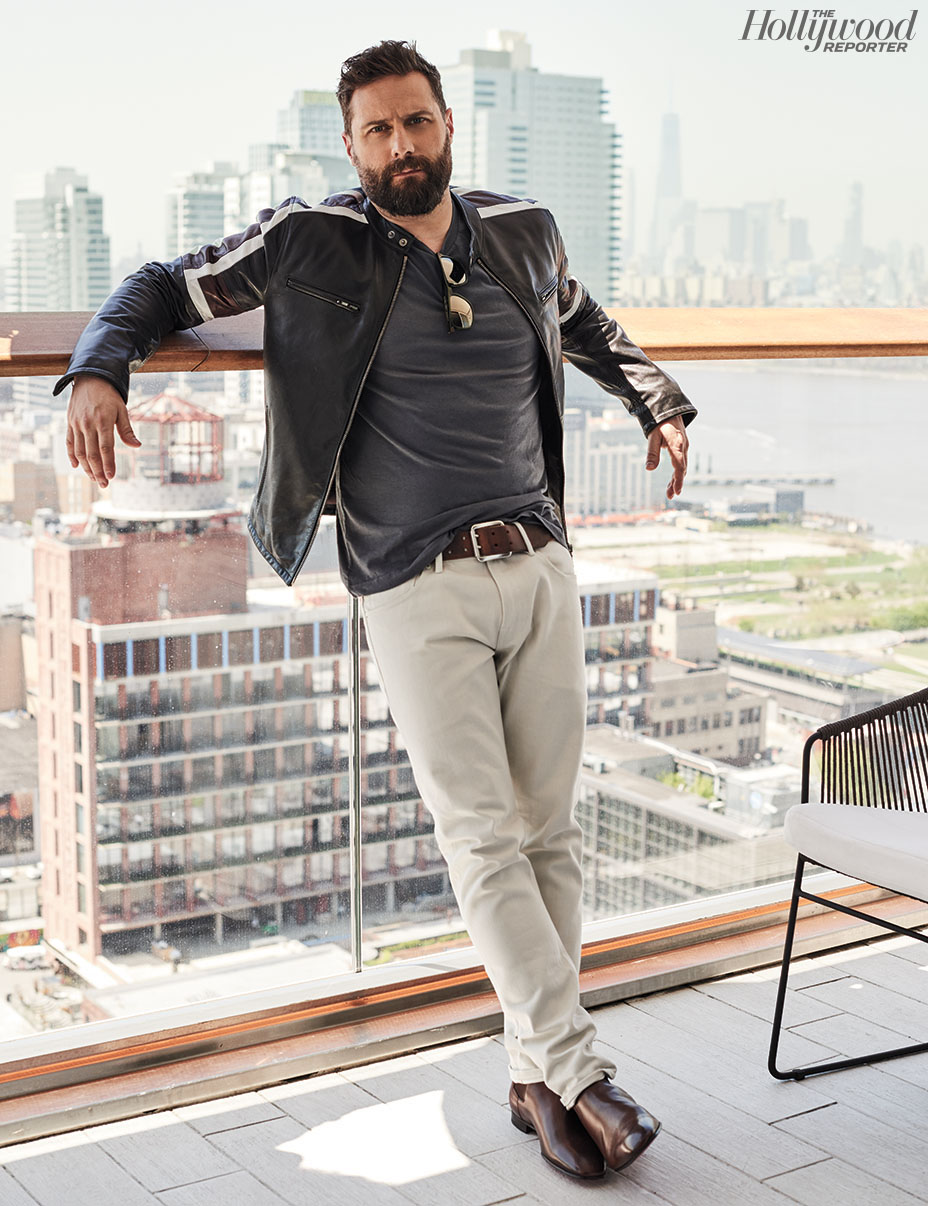 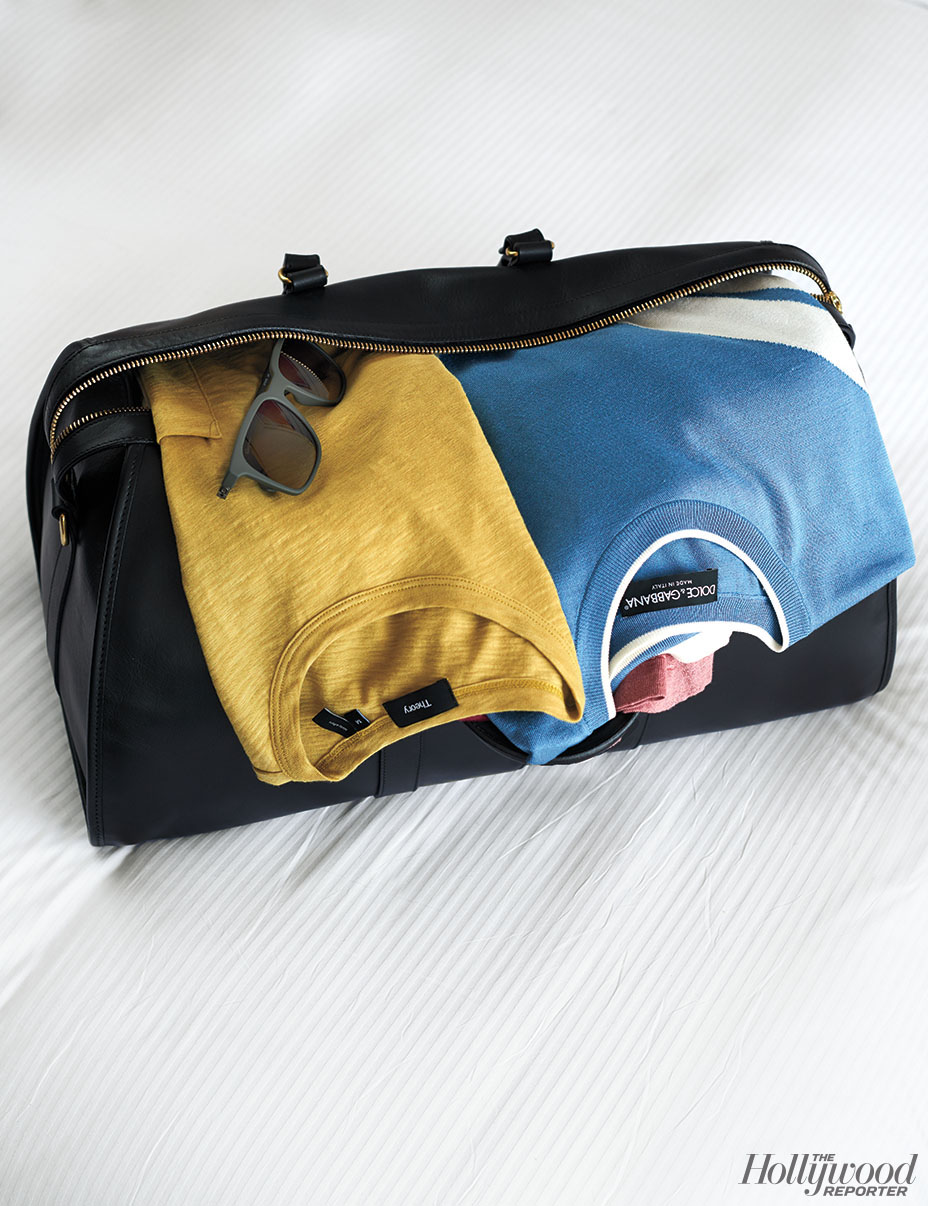 For business meetings, Fisher and Murray picked out a single-breasted suit from Italian luxury brand Luigi Bianchi after trying on several selections. “When you put a suit on, there’s the idea that you’re ready to do business, but there can still be a sense of swagger,” says Fisher, adding that plaid is best offset by a crisp white shirt, sans tie. He notes that the tieless white shirt with a suit is emerging as a power look, seen recently on former President Barack Obama and Rupert Murdoch. “Frank is in an unconventional business, so he doesn’t have to look like a typical buttoned-up suit-and-tie guy.”

For casual looks during the day, Murray considered several leather jackets, including one from a famed luxury moto brand, finally deciding on a souped-up Dolce & Gabbana style that closely duplicates his favorite cafe racer fit. “It was a French Riviera spin on what I wear every day pretty much,” says Murray. “The white trim was really the thing that set it apart from my usual getup.” Paired with a subtle gray T-shirt, the off-white version of the Japanese selvedge jeans Murray always wears and burnished brown leather boots, “it’s more fashion-considered and turns the volume up from his normal aesthetic,” says Fisher. “He can still feel like himself and not feel like he’s wearing someone else’s clothes.” 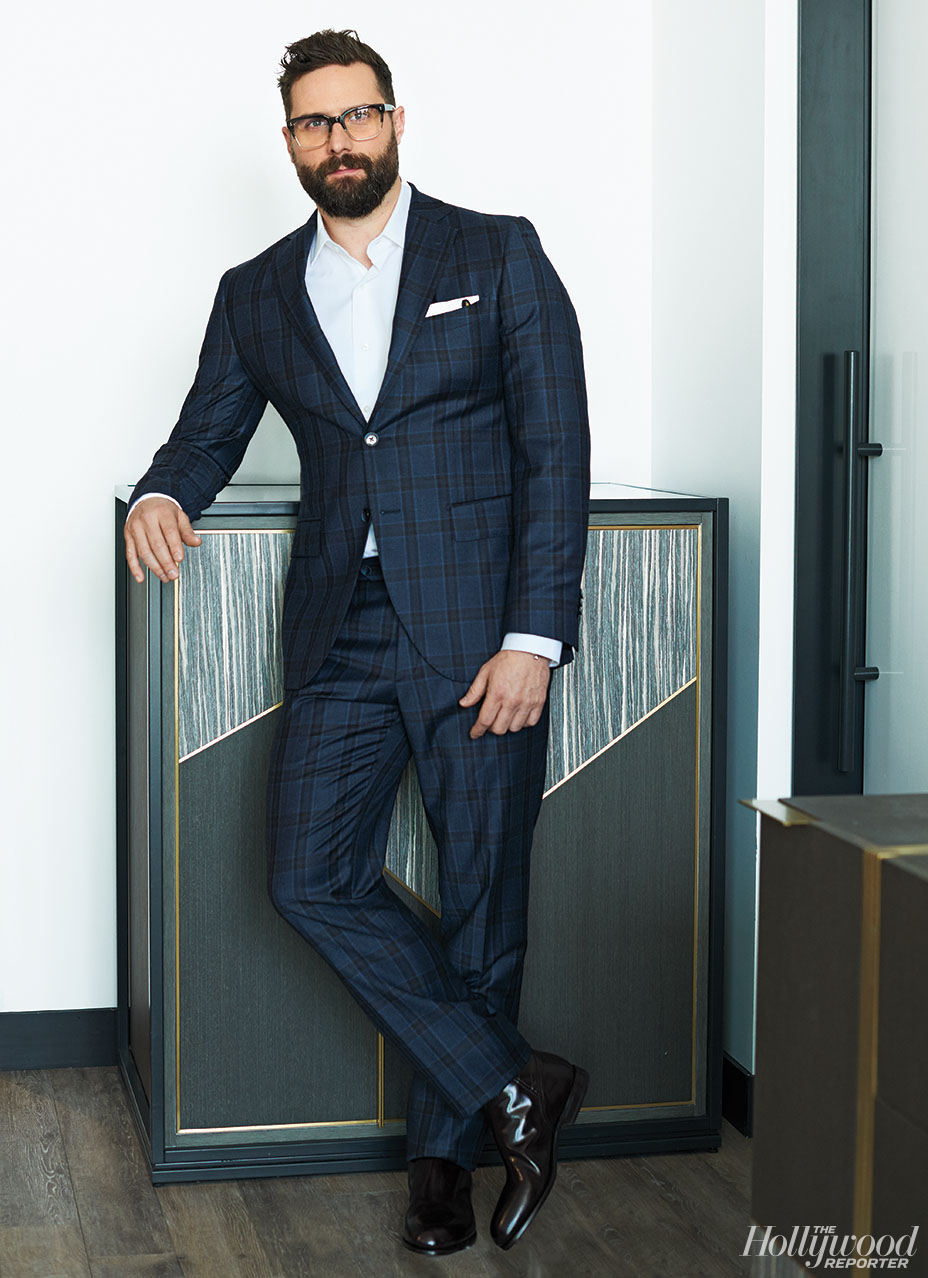 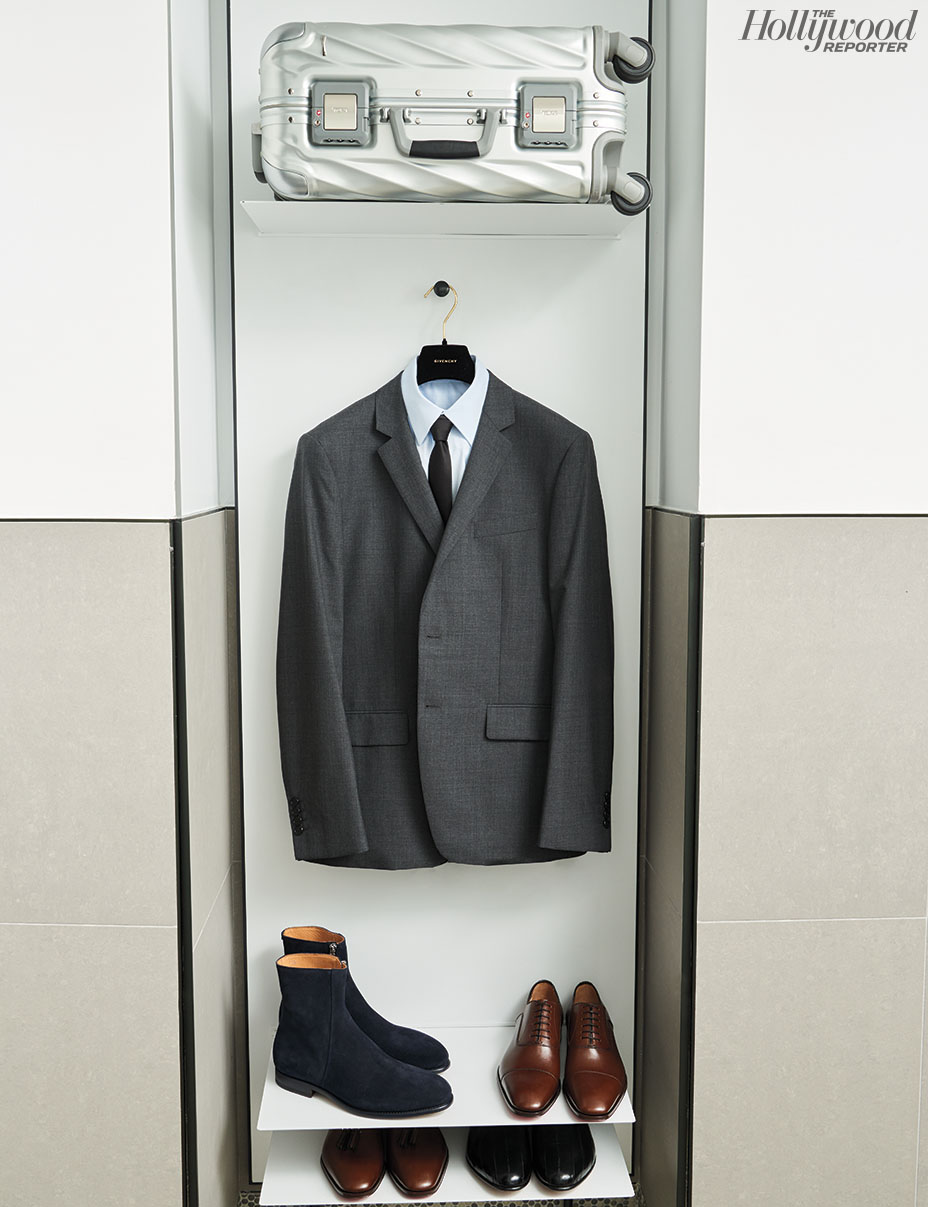 Stylist Michael Fisher recommends a hard suitcase like the Tumi International 19 Degree Aluminum for traveling to the fest. “It’s lightweight, compact and the wheels are easy to maneuver,” he says. Six other tips for getting a full wardrobe safely to the South of France:

– Start with the suits. To pack a jacket, turn it inside out so that the inner lining is outside, protecting it from wrinkles. Fold the jacket vertically along the center back and horizontally until in quarters. Lay it at the bottom of the suitcase with trousers folded once below the knee on top. For silk jackets that can snag, layer tissue paper or a plastic dry cleaner’s bag on top.

– Pack each outfit together. “You save time because you don’t have to reassemble ‘the look,’ ” says Fisher.

– Use shoe bags — “especially with patent leather formal shoes because they scratch easily,” says Fisher. He also advises wearing sneakers on the plane as they’re clunky to pack.

– Belts, socks and underwear for each look can be rolled and placed in the appropriate shoes. Protect ties by wrapping them in tissue, says Fisher.

– Get a jewelry pouch to hold an evening watch, cuff links and shirt studs for formal events like Cannes premieres, he says. Pack it in a carry-on.

– “Always bring two swimsuits” for social events poolside, says Fisher, “so you have a fresh one the next day while one suit is drying out. And I like to bring two or three pairs of sunglasses to change things up.” 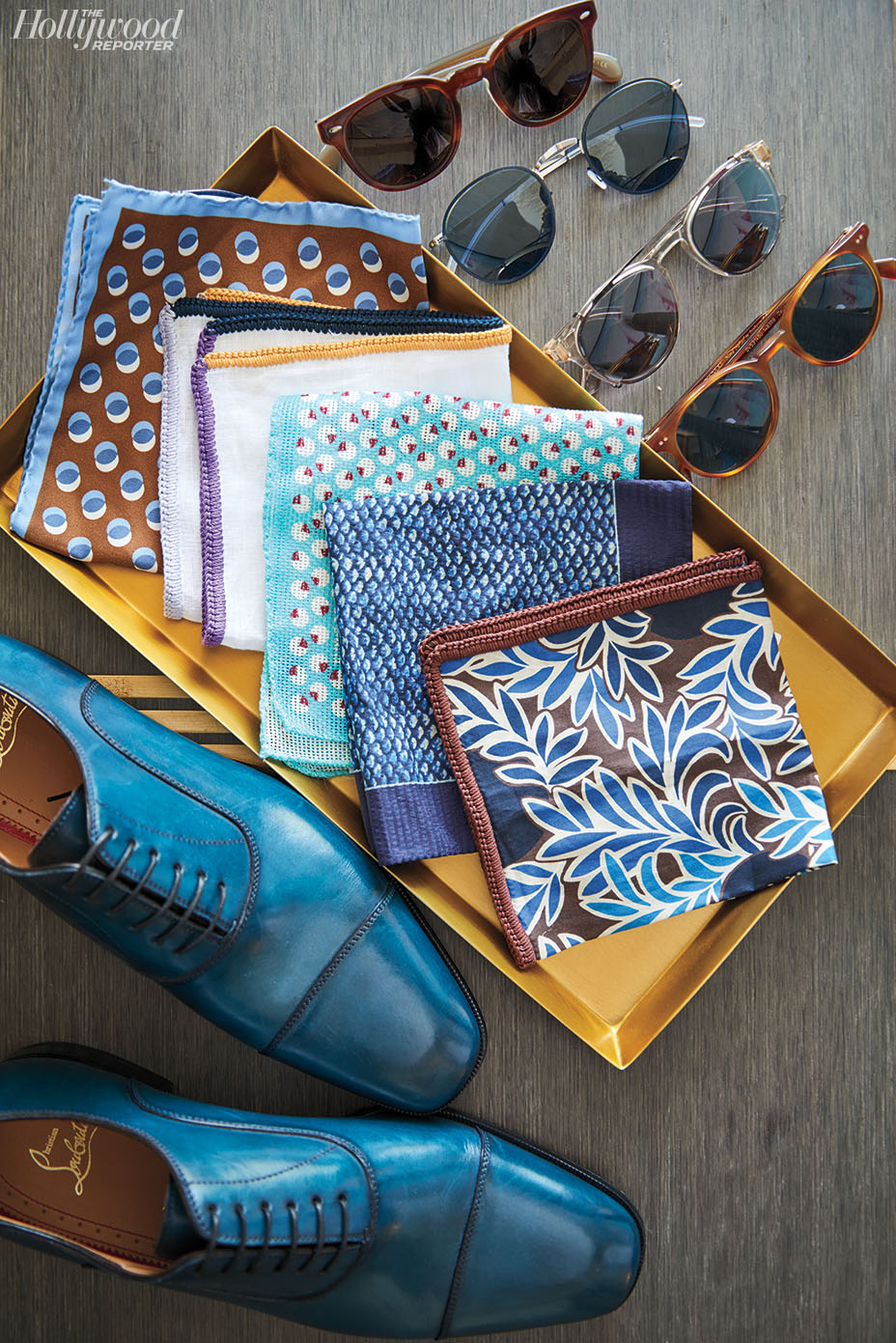 A version of This story first appeared in the May 10 issue of The Hollywood Reporter magazine. To receive the magazine, click here to subscribe.