Continue to The Hollywood Reporter SKIP AD
You will be redirected back to your article in seconds
Skip to main content
May 10, 2019 8:00am

Haider Ackermann can’t recall the moment he first met his muse, Tilda Swinton. She can’t either, says the Bogota-born French designer, but they agree on a most important fact about their relationship: It was meant to be.

“That’s quite obvious,” Ackermann, 48, tells The Hollywood Reporter by phone from Paris, where one would find him most days — unless he’s working out of his other atelier in Antwerp, Belgium. “When you surround yourself with people who have a similar sensibility, the language is quite the same. With Ms. Swinton and I, we both know what we are talking about, even when we look at each other. There’s a lot of trust, and after so many years of friendship, not much explanation is needed.”

Their red carpet collaboration began at the Cannes Film Festival 15 or 16 years ago, Ackermann estimates, and he confirms that he is again dressing Swinton, 58, for the May 14 world premiere of Jim Jarmusch’s zombie comedy The Dead Don’t Die. Of her opening-night look on the Palais carpet, the designer indicated only that it will be informed by the fact that “she’s going to be between all those dudes” — co-stars Bill Murray, Adam Driver, Steve Buscemi, Iggy Pop and Tom Waits. (Selena Gomez and Chloë Sevigny also star.) “When you step out on the red carpet, it’s quite hard-core. You want her to feel at ease and comfortable.”

They have experience finding that sweet spot together in Cannes after having worked together on close to a dozen festival looks, and he’s always there by her side. Ackermann admits he styles for the grand occasion (usually involving minimal makeup and jewelry) but what’s far more important to him — and to Swinton — is telling a story, one that either contrasts with or complements her roles. “To just make a dress is not that interesting — it’s more intriguing to tell a story,” says Ackermann, and in Swinton, he’s found the perfect collaborator. “She’s my play companion. … She can challenge me. She’s much more edgy and advanced. She looks much more in the future. That’s a contradiction I find quite interesting.” 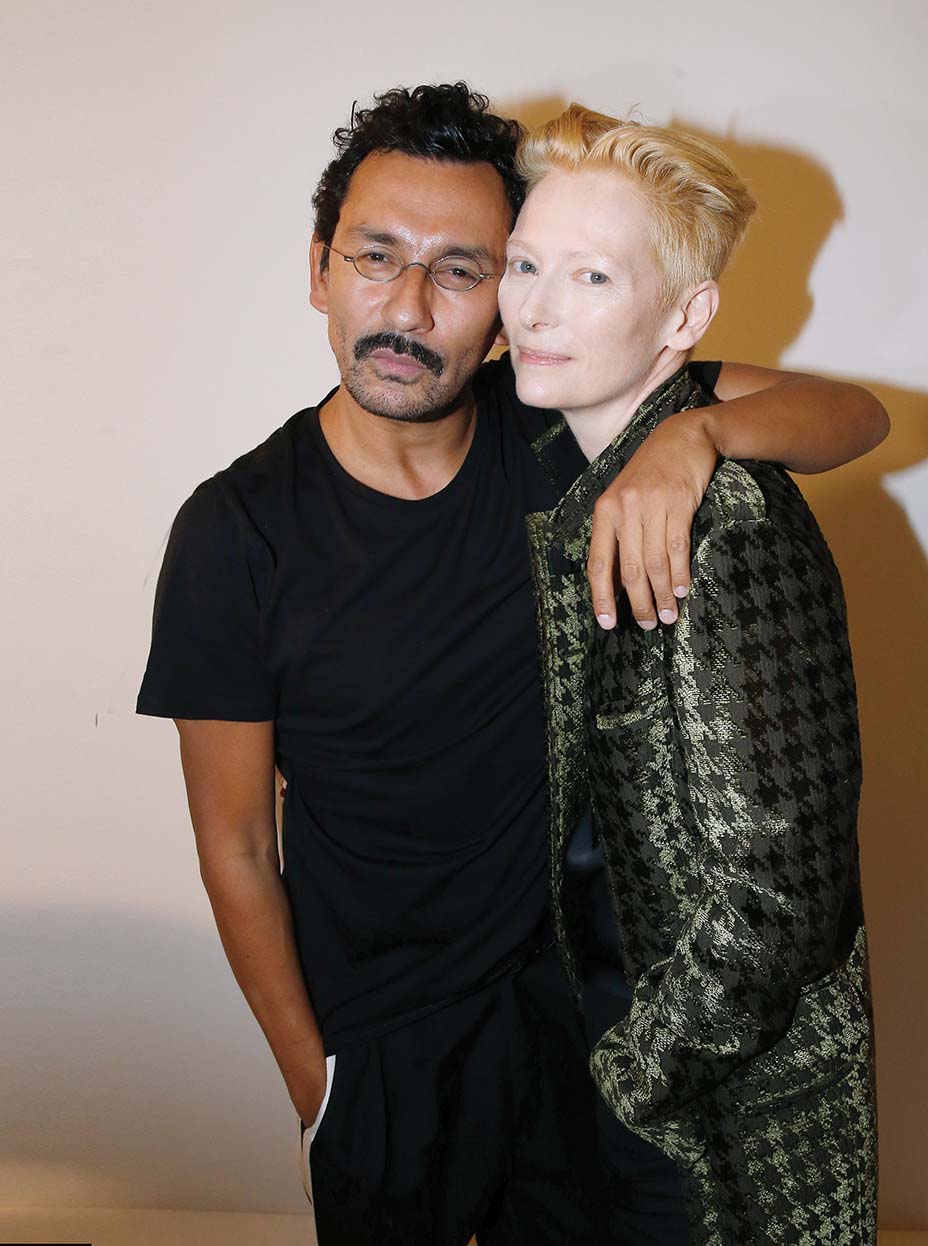 Case in point: In 2011’s We Need to Talk About Kevin, directed by Lynne Ramsay, Swinton plays a writer who struggles to find peace with her sociopathic son (Ezra Miller). “It’s a very disturbing movie,” Ackermann says of the plot, which involves a horrific school massacre. “Kevin is tremendously tormented, and she rejects the child even though she loves him. Blue added softness to what the movie is about,” which Ackermann achieved by re-creating a look from his Fall 2011 collection, converting midnight pants into an asymmetrical high-waisted skirt and pairing it with a blue scarf-collar silk shantung top. 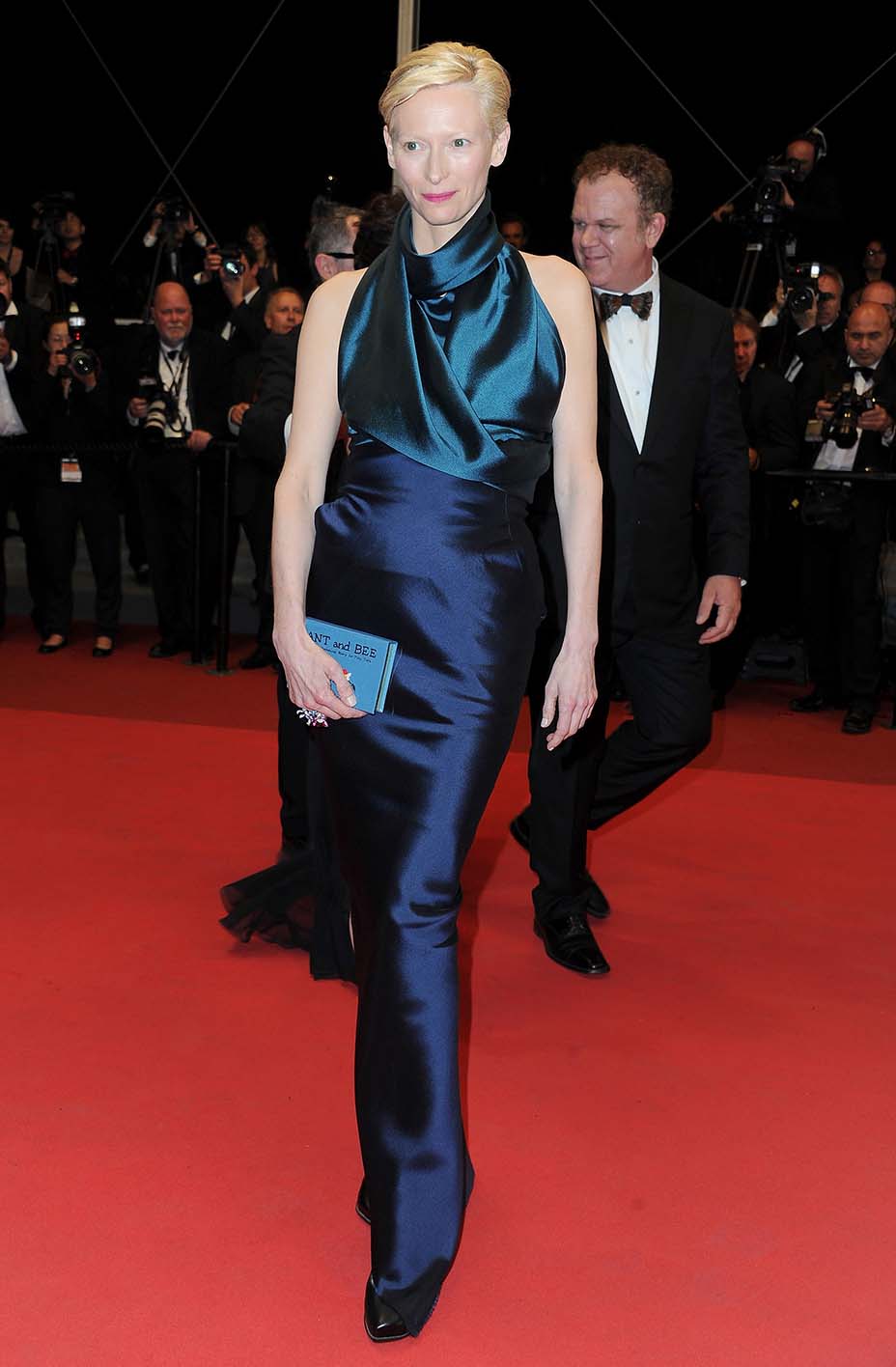 The following year for the premiere of Wes Anderson’s colorful and kooky Moonrise Kingdom, in which Swinton stars as a social services worker on the hunt for two kids in love and on the run, they went for a nude, origami-inspired gown with a bow accent. “[Wes Anderson’s movies} are so extraordinary and everywhere you look there are details and you discover something else. I wanted her to be very nude, very absent in contradiction with the movie yet very present at the same time,” Ackermann explains. “To put her in a color that would reflect her skin would be good to go against the colorful movie that would come a few minutes later.”

For a photo call preceding the premiere, Swinton wore an ice blue pencil skirt and a taupe, tie-front blouse, both by Ackermann, paired with Nicholas Kirkwood pumps. “Ms. Swinton has quite amazing legs and I sometimes like to show her legs; it makes her very feminine and gives her something a little bit precious, which I personally kind of like. Her skin is absolutely flawless and you can put her in every color; she makes every color look radiant.” 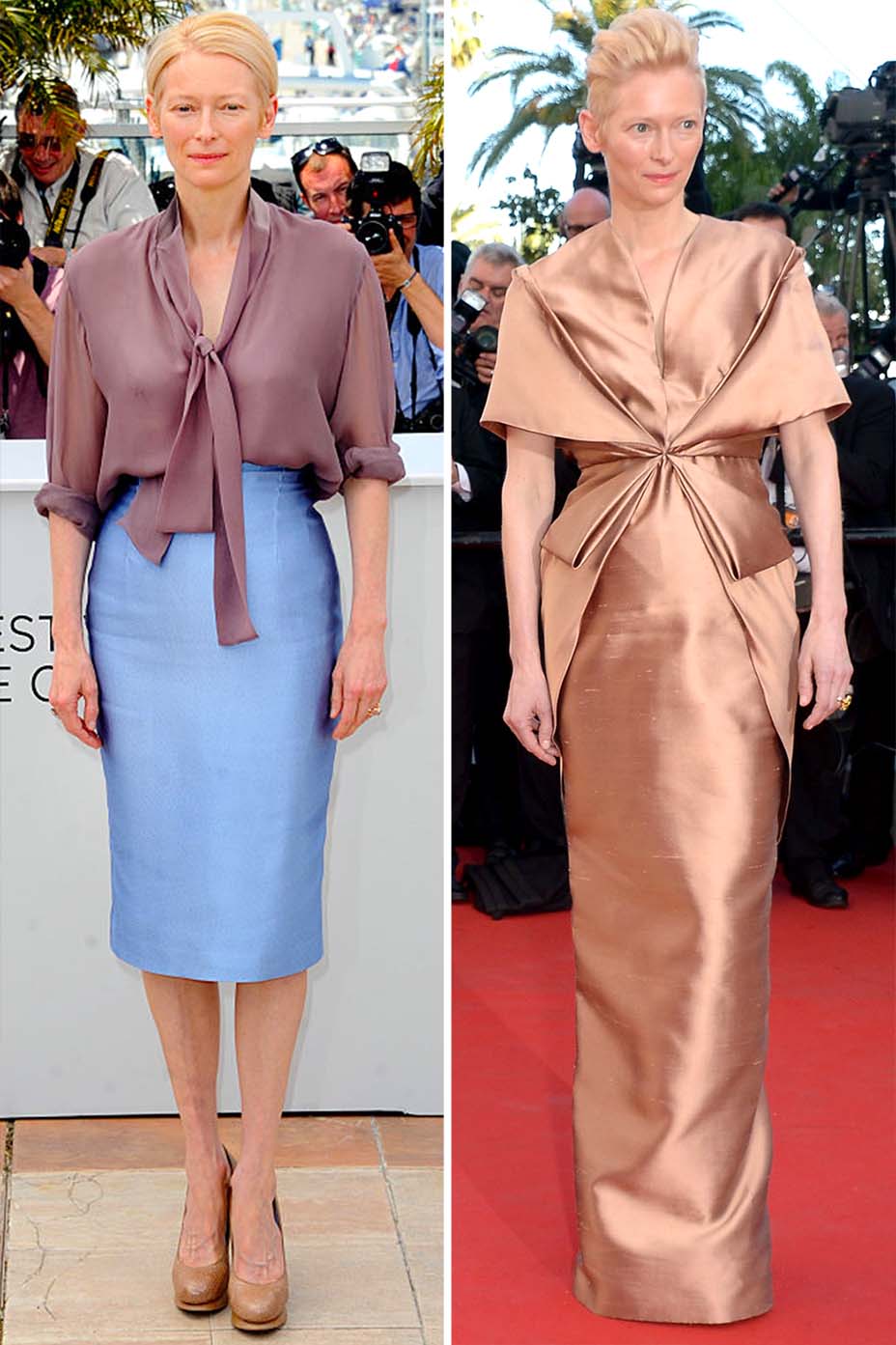 In 2013, Swinton promoted Jarmusch’s Only Lovers Left Alive, co-starring Tom Hiddleston. She wore a gold gleaming top and pants, set off by red lipstick, to the premiere. “I wanted her to shine through the night because the story plays only in the night,” says Ackermann of the film about a pair of vampire-lovers navigating their relationship. (Swinton’s character lives in Tangier, Morocco, a location Ackermann once called home.)  “The red lips is the blood coming out.” 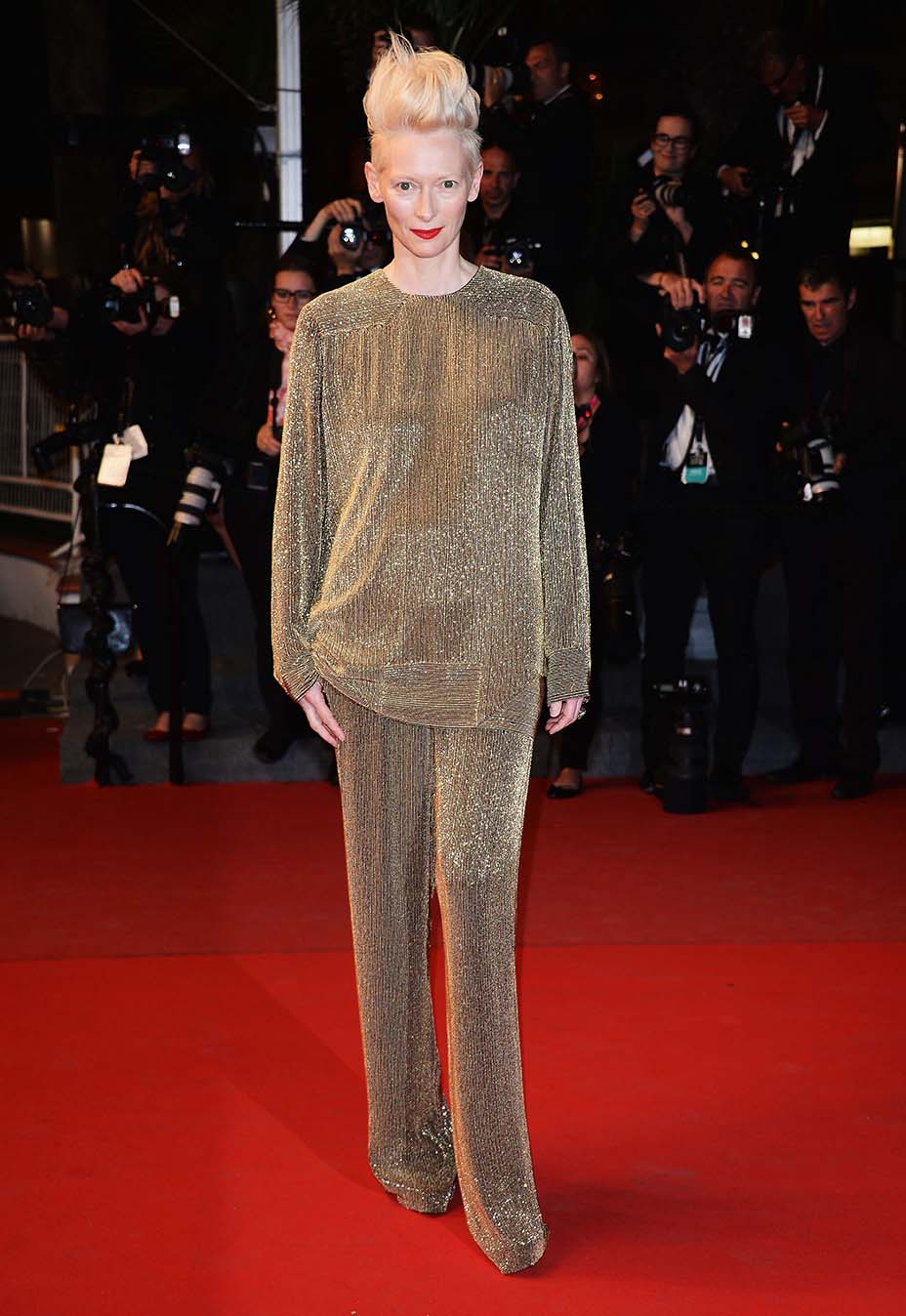 The designer later worked with Swinton for the 2017 premiere of Bong Joon-ho’s Okja, an epic story about a young girl who risks everything to save her childhood best friend, a conglomerate-bred super pig named Okja. Swinton does double duty in the film, playing an eccentric and cruel CEO named Lucy looking to profit from the pet, while also tackling the role of Lucy’s twin sister, Nancy. “For photo calls, you don’t want to be too dressed up and you don’t want to be too dressed down,” Ackermann notes of the mint suit (paired with Dior shades) that is both modern and timeless.

For the evening premiere, Ackermann designed a white dress to contradict the “harshness and cruelty” that engulf the eponymous CGI pig in the film. “Tilda plays this villainous person. I wanted the opposite — serene, calm and pure,” Ackermann says. “When you look at Okja, you want to caress this little monster, and I wanted something smooth along her accentuated waist, like you would want to hold her. At the end of the day, the movie is about tenderness.” 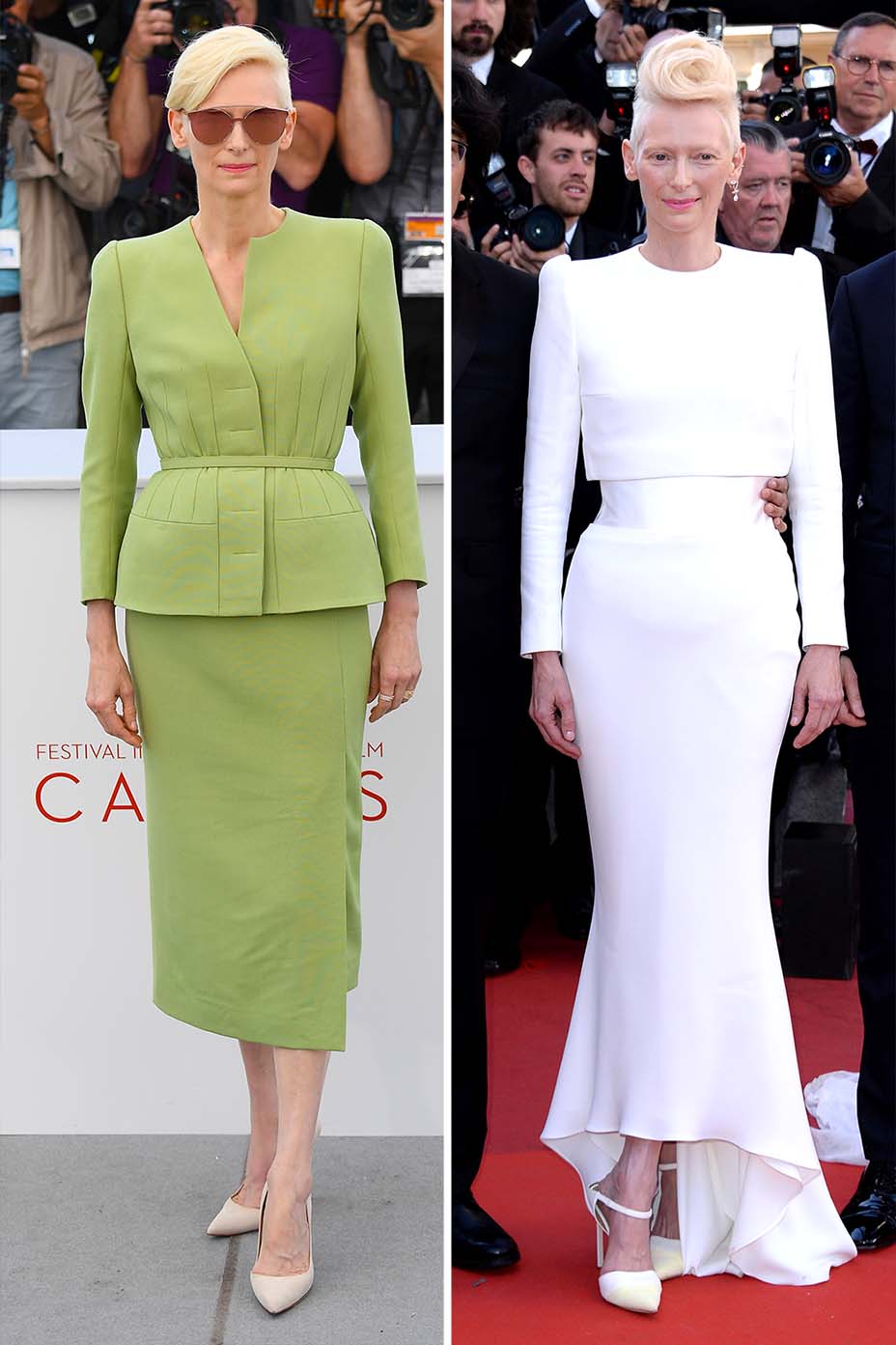 In 2009, Swinton and Ackermann deployed a different strategy. The actress attended the premiere of Pixar’s Up, in which she is not featured, so Ackermann decided to downplay the fashion — but not her distinctive features. “We put her in red — not the exact same shade as the carpet, but a noble red,” he says of her ensemble. “At that time in fashion, there was a lot of nudity on the catwalk. This look has an aristocratic nobility to it. She’s got such a magnificent, beautifully intriguing face. I wanted her face to reign over the red carpet — just let her be her.” 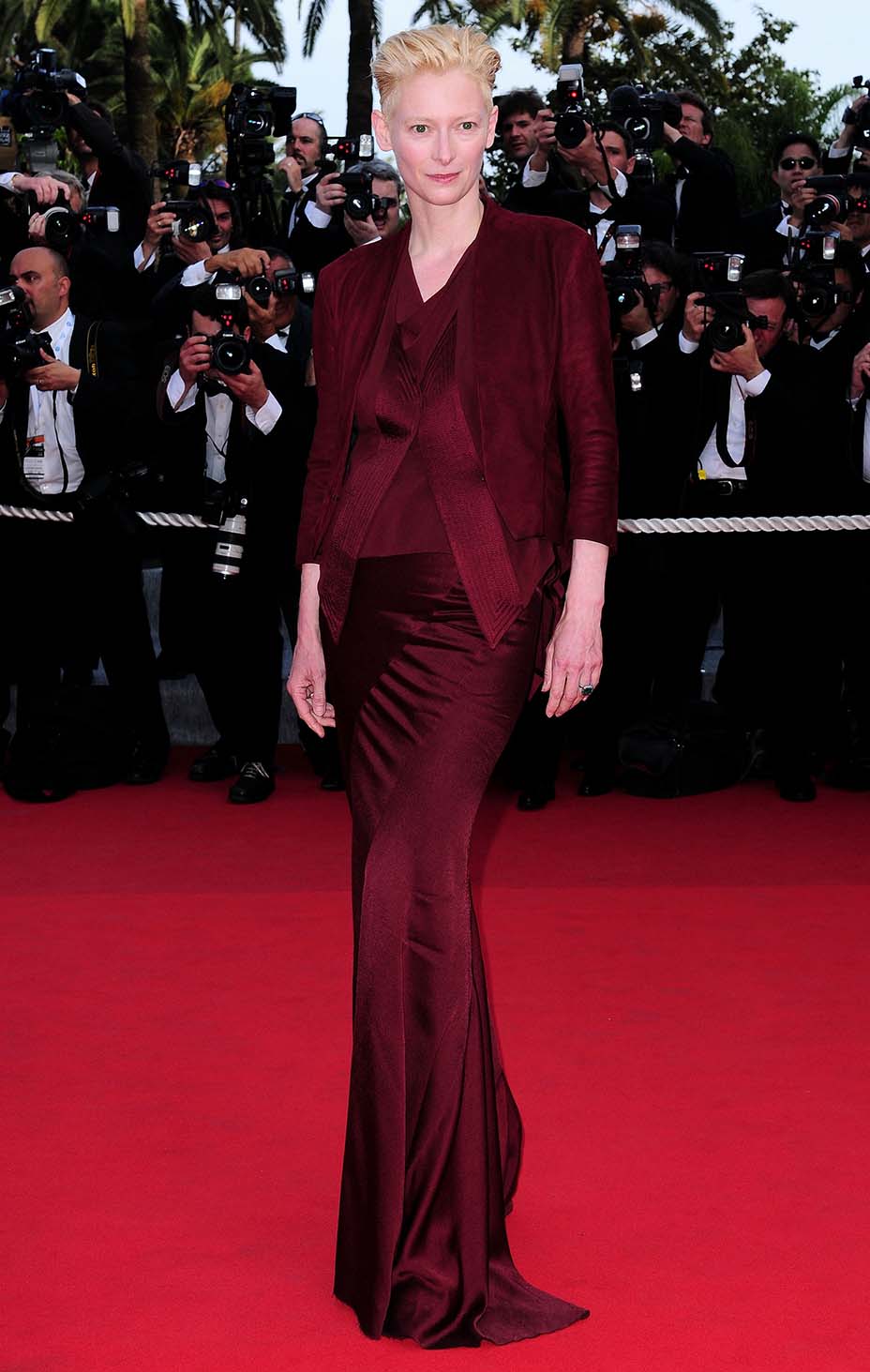