Chanel’s annual Artists Dinner at Balthazar is always a starry affair, teeming with A-listers happy to congregate at the famed SoHo brasserie so they may celebrate the painters, sculptors and other creatives whose contemporary works will be presented as prizes at the Tribeca Film Festival’s awards ceremony on Thursday.

But on Monday night, once the red carpet had wrapped, the frenzied shouts of “Bobby!” “Diane!” and “Debra!” (for De Niro, Kruger and Messing, respectively) had died down and the photographers had dispersed, one more high-wattage star arrived in decidedly low-key fashion: Leonardo DiCaprio, with a Los Angeles Dodgers cap pulled low over his eyes, who slipped quietly into his seat at Table 19 next to festival co-founder De Niro.

It was DiCaprio’s second surprise arrival at a Tribeca event this year, having also made an appearance at the Directors Series talk between De Niro and Martin Scorsese and Apocalypse Now screening on Sunday afternoon. Scanning the crowd at Balthazar, someone already had remarked, “This is a good room,” a reference not so much to the space but to the caliber of the gathering; the unexpected addition of DiCaprio, however, sent that idea into the stratosphere. This was the party of the festival. 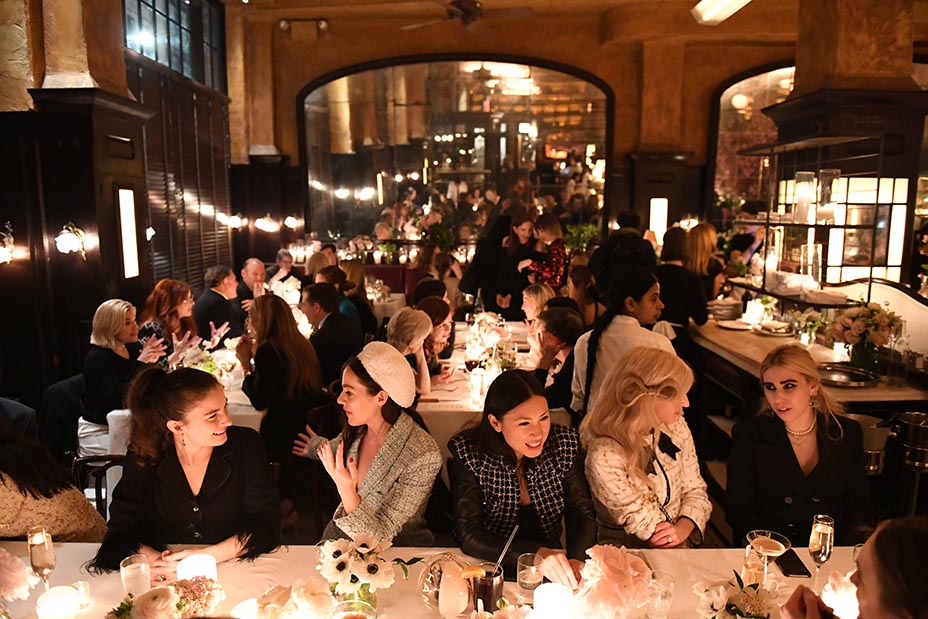 Balthazar always takes on a bit of an enchanted air for this event, elevated from its power-lunch vibe via the addition of sprawling branches of cherry blossoms, fragrant peonies arranged in low silver vases (the better to enable conversation across a table) and hundreds of candles, which cast a undeniably romantic glow on an assemblage that also included Chloe Sevigny, Katie Holmes, Alexander Skarsgard, Helena Christensen, Mark Ronson, Cara Delevingne, Kal Penn and Carla Gugino — who, incidentally, enjoys a history with the two guys seated at Table 19.

“As a New Yorker, this is such a special festival, but I’ve also known Robert De Niro since I played his daughter in This Boy’s Life many years ago,” Gugino said, name-checking the 1993 Michael Caton-Jones film in which she co-starred with De Niro and DiCaprio. “So to be able to come here tonight and be with a bunch of artists celebrating artists celebrating film — there’s no place I’d rather be.” 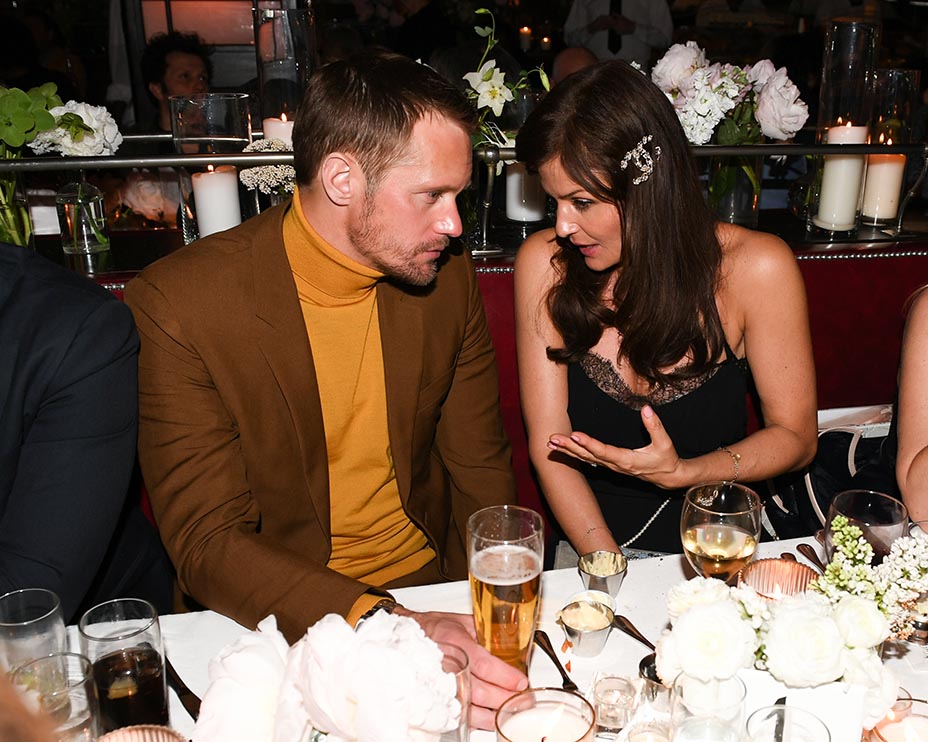 Gugino arrived with Zac Posen, who is deep in studio work for the upcoming Met Gala (“I’m dressing 12 people, men and women, and working with very advanced technology in preparation,” he said), and her floral-embroidered satin dress by the designer was one of the few looks on this red carpet not courtesy of Chanel. Indeed, part of the fun of the evening was seeing how such a wide variety of women make the label their own, from the oversized double-C brooch in Christensen’s hair to the lambskin jacket and miniskirt worn by Sevigny or the rose-hued bouclé tweed jacket that Haley Bennett paired with jeans. 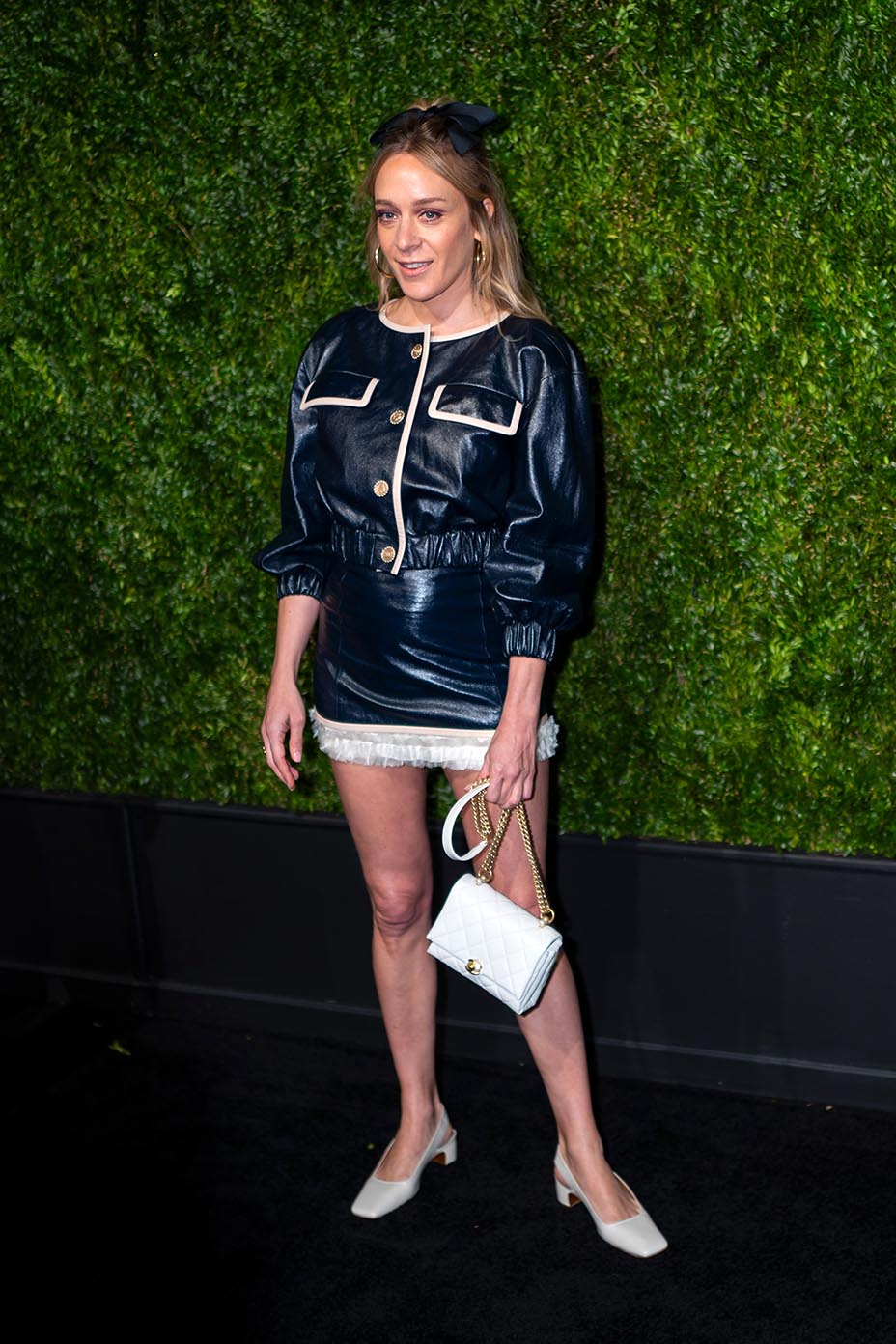 Bennett has been drawing festival buzz for Swallow, the story of a newly pregnant woman compelled to eat things previously thought inedible. “It’s a contemporary fairy tale that takes an alarming turn,” she told The Hollywood Reporter. Bennett will follow up that work with another high-profile project as part of Ron Howard’s Hillbilly Elegy with Amy Adams and Glenn Close. “It’s set in Ohio, and I’m from Ohio, and the project is just extraordinary,” she said. “To be part of this company, the prospect of working with Ron and this assembled cast, it’s absolutely a dream come true.”

Marking the Tribeca fest’s halfway point, the night also served as a bit of a respite for those who have been hard at work on juries or in panel discussions. “I’ve been seeing two and three movies a day, wonderful films from South Korea, Germany, Mexico and all over the world,” said jury member Angela Bassett, who embellished her black and white tuxedo with a cluster of Chanel brooches. “I’ve been so impressed by all the first-timers, both actors and wonderful directors, and overall very strong storytellers.”

Messing, meanwhile, has been sharing jury duties with Sevigny and Wanda DeWise for the Nora Ephron Award, named for the late filmmaker and given to a female writer or director who exhibits excellence in storytelling. “We’ve definitely created a little sisterhood, which I’m really enjoying,” Messing said, adding that she’s pleased by the palpable woman-centric vibe of this year’s festival.

“It couldn’t be more important that representation of women is finally brought to where it should always have been — and not only just women, but people of color and the disabled, everyone who is disenfranchised and whose stories are usually not told,” the actress added. “It’s our obligation as creative people within the community to do whatever we can to expand the narratives that we tell.”

In addition to a $25,000 prize, the winner of the Nora Ephron Award will receive a screenprint of “Alison the Lacemaker,” a 2018 work by Caledonia Curry, who exhibits her artwork under the name Swoon. 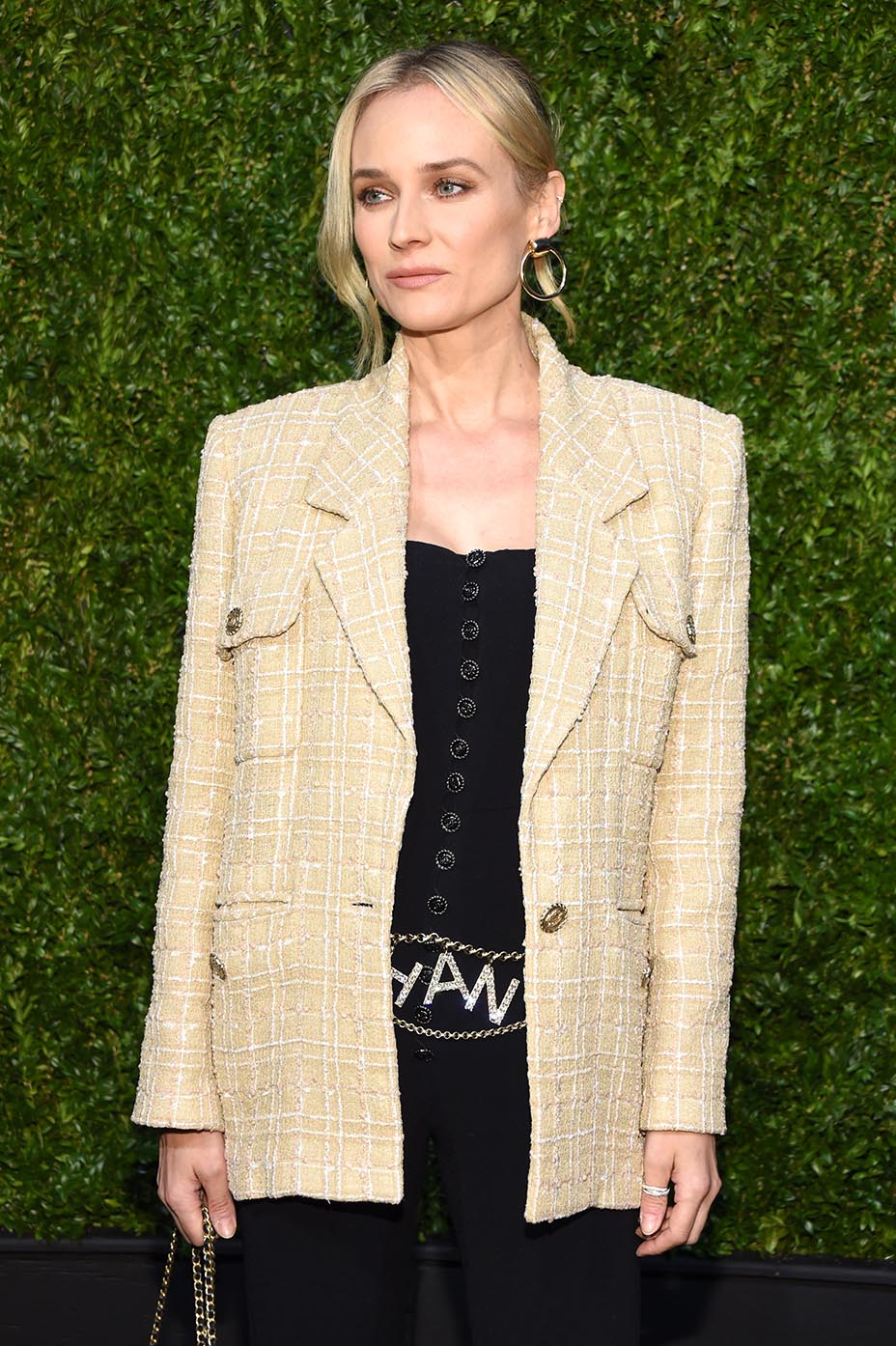 Diane Kruger likewise appreciated the spotlight on female filmmakers. The night before the festival kicked off, she attended a screening and panel discussion highlighting two short films that both focus on female artists and were directed by women: Celestial, from director Rosie Haber, and The Fourth Wave, directed by Savannah Leaf. “I really appreciated that evening; it was such a great discussion about the female voice in film,” she said.

And while that event was hosted by Bulgari, which signed on in 2018 as the official jewelry sponsor of the Tribeca Film Festival, it was clear on Monday night that Kruger’s heart lies with Chanel, for reasons both professional and personal. “Karl [Lagerfeld] was a close friend of mine and my neighbor — he knew me since I was 16 years old,” she said of the late designer, who died Feb. 19 after helming the design duties at the label for 36 years. “They’ve personally supported me ever since I became an actress. They were the first house to lend me clothes, and I did many campaigns with them, which allowed me to make movies that made no money. I just think they’re very generous, with both women and artists. That should be appreciated these days.”