A new museum is coming to Los Angeles for those seeking a higher education. Cannabis tech site Weedmaps will open the Museum of Weed on Saturday, running through Sept. 29 (general admission is $35).

The educational museum features several exhibitions on the history of cannabis in regards to propaganda, criminalization, the hippie movement, mass incarceration and modern science — all in a 30,000-square-foot building on Cahuenga Blvd with a view of the Hollywood sign (which briefly became the “Hollyweed” sign in 2017) in the background.

It comes more than a year after California legalized the plant, and follows other museum endeavors including the Oaksterdam Cannabis Museum in Oakland, the Hollywood Hemp Museum, the Cannabis Museum in Ohio and the Cannabition Cannabis Museum in Las Vegas. America’s first Cannabis Cafe is coming to Los Angeles in August as well, thanks to Lowell Herb Co., with a fan list including Miley Cyrus, Jimmy Kimmel and Sarah Silverman.  (Jay-Z, Post Malone, Snoop Dogg and others have also invested in or founded their own cannabis brands).

Like the Cannabis Cafe, the Museum of Weed has faced red tape when it comes to serving cannabis goods. The museum’s official stance is that no cannabis will be sold or permitted on-site currently. But to satisfy any munchies cravings, the museum cafe serves virgin “Wake & Bake” breakfast goods such as the “Sweet Blue Dream” algae coconut yogurt parfait with granola and basil syrup,  “One Dank Bowl” of fingerling potatoes in fennel broth, “Get Your Bake-on” BLT sandwiches and “Jacked Nachos” with roasted chiles. 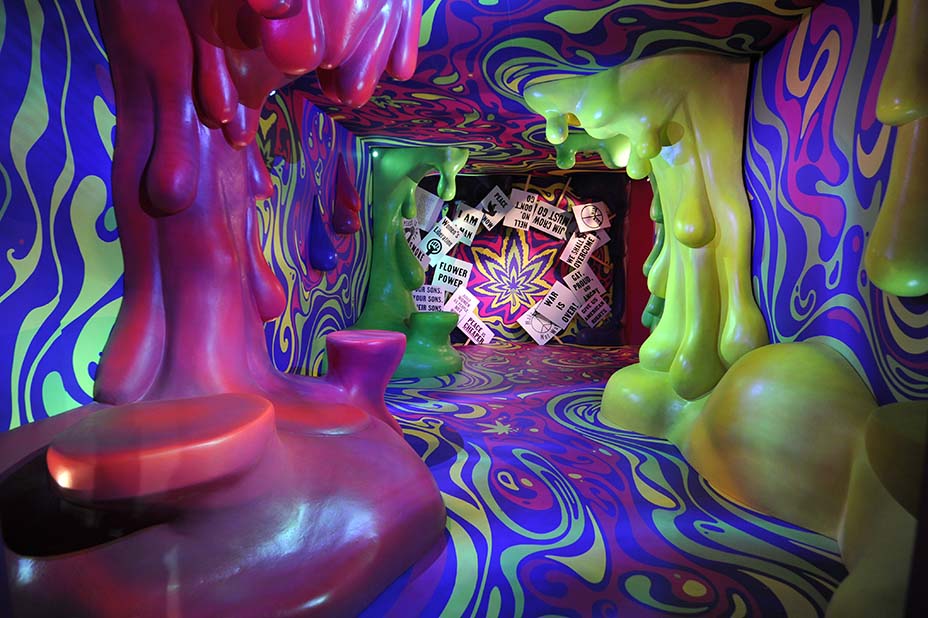 Although the Museum of Weed is less of a photo op venue than the Museum of Ice Cream and similar pop-ups in L.A., the “Counterculture Revolution” provides an Instagrammable moment for fans, who can pose in a tie-dye room filled with hippie protest signs and interior design reminiscent of dripping slime for a trippy effect.

Another photo moment comes later in the museum during an exhibit on the War on Drugs, for which the room is lined in black-and-white phrases used during the Ronald Reagan administration like “Just Say No,” “No Hope with Dope” and “Tear the Ass Out of Cannabis Supporters.” On the wall, 13 television screens play clips of Reagan’s famous “This Is Your Brain on Drugs” fried egg advertisement. 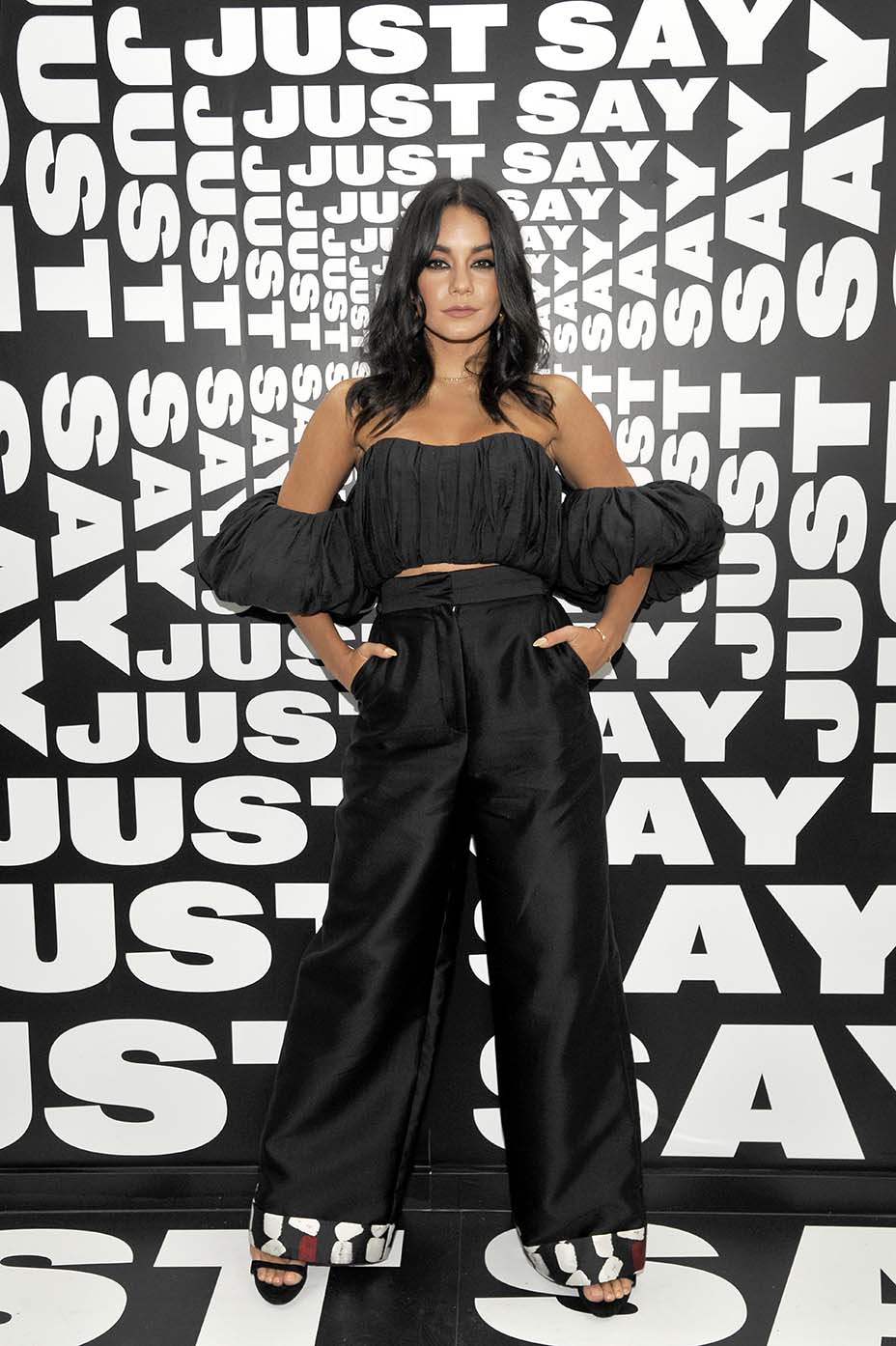 At the opening party on Thursday, Vanessa Hudgens, Ireland Baldwin, Ashlee Simpson, Evan Ross, Christina Milian and Tommy Chong were among the stars to walk the red carpet. “The story of cannabis is such a fascinating story to me,” Hudgens tells The Hollywood Reporter. “It’s mind-blowing to me how many people are incarcerated because of non-violent possession. … It’s really important to educate yourself as well, and I think that this museum will kind of debunk this mysticism that’s been around it.”

Hudgens says she’s seen firsthand the positive effects of cannabis with family and friends with cancer, adding that Rick Simpson oil and Lowell’s products are two of her favorites.

Baldwin described how she grew up “holistically,” where cannabis was always “prominent” in her family (her parents are Alec Baldwin and Kim Basinger). It helped her with her anxiety, which she’s experienced since she was eight years old. “I’ve been a weed smoker for quite some time and, not just touching on the social injustice side of it, but just changing the views that people have toward stoners and people who smoke weed when really they have no idea how beneficial it is for your health and just the amazing things that it really does for so many ailments and so many things.”

The model adds, “Obviously I didn’t smoke since I was eight years old, but maybe if I did I would be a much more stabilized person. … I’m very against the pharmaceutical industry, for a lot of aspects of it, not all.” (Among her go-to cannabis brands are Canndescent, Kiva and Lowell). 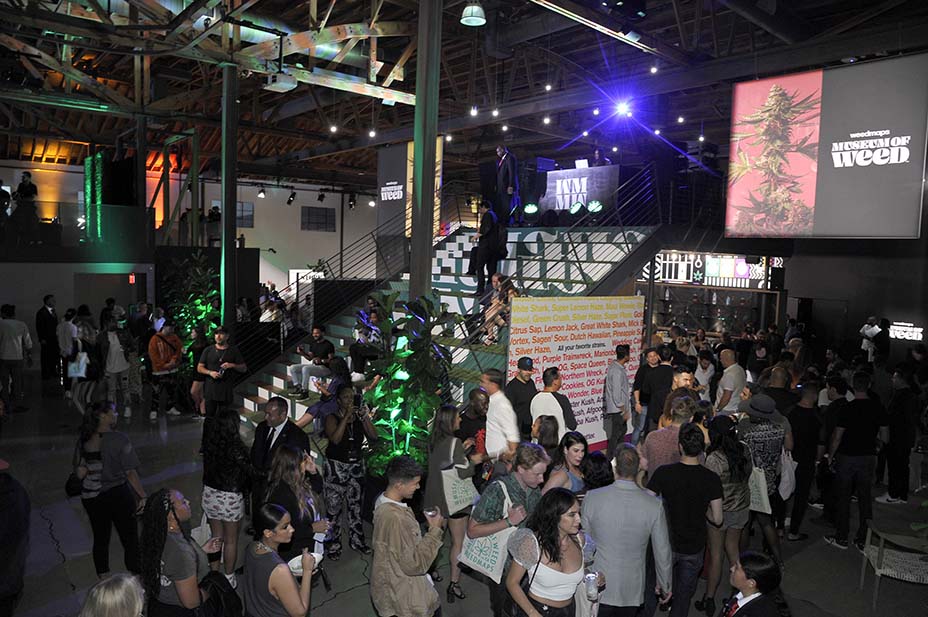 Guests begin in the “Pre-Prohibition” exhibit to see a hemp reproduction of the Betsy Ross Flag, which legend has it may have been made of hemp, and medicine bottles from the early 1900s, when 2,000 medicines globally contained cannabis. The “Age of Madness” gallery explains how cannabis became “the world’s most notorious plant” and in 1913, California was the first state to prohibit cannabis, which coincided with the influx of immigrants after the Mexican Revolution.

The executive director of the Museum of Weed, Madeline Donegan, explains that the term “marihuana” was rooted in racism toward people from Mexico: “The Mexican Revolution happened when they were trying to stigmatize cannabis. That’s when they started calling it ‘marihuana,’ so it’s associated with ‘the Mexicans,’ if you will, and gave it a derogatory framework,” she tells THR.

Guests experience a carnival fun house-like room filled with shaped mirrors and recreations of “reefer madness” propaganda that discouraged cannabis use, with blazen messages like “the devil’s weed,” which along with other activations, was created in partnership with Vice Media’s creative agency Virtue.

“It’s pretty ludicrous,” Donegan says of the era. “This time period was very overwhelming and propaganda was very prevalent so we wanted to create this distorted, overwhelming effect in here to give people a sense of the time.”

The result of the criminalization of cannabis was mass incarceration, particularly of people of color, the museum highlights. One wall features statistics like 41 percent of people arrested for drugs in 1991 were black.

A jail station projects the voices of four currently incarcerated people charged with drug crimes, sentenced for between 20 years and life, to share some personal narratives in what Donegan calls “the soul of the museum.”

Hollywood clairvoyant Tyler Henry, who attended the opening, tells THR, “I just think it’s such an important cause, because so many people are locked up for it for no reason, particularly people in the African-American community, and I think it’s just ridiculous.”

Next on the museum’s timeline is the 1990s, when cannabis reached a “new high in pop culture.” The gallery is set up like a teen’s bedroom with a lava lamp, glowing fish tank, shelves of bongs and retro stereos. On the walls are posters for Up in Smoke, Total Recall, Full Metal Jacket and Back to the Future. 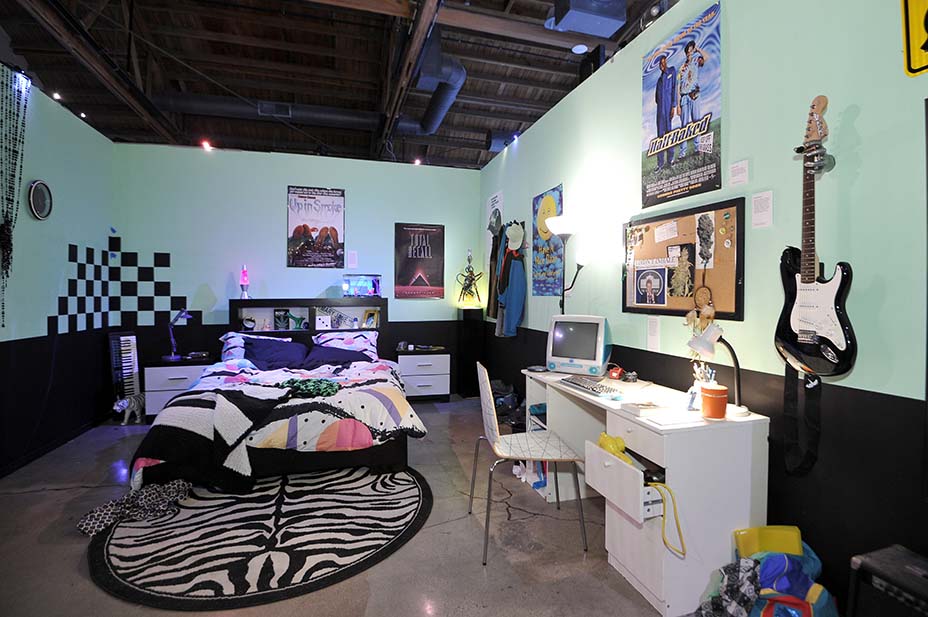 The most interactive part of the museum comes in the “Legalization” exhibition, which features an interactive tech weed wall with a body sensor, where guests can select years from the 2000s. Each year then has options to select a moment in cannabis, political or pop culture history. For example, click on 2013, and learn that Uruguay became the first country to legalize marijuana and Cyrus smoked weed at the MTV Europe Music Awards that year.

Baldwin notes how cannabis is becoming more culturally accepted in California. “It’s really easy to think that things are getting accepted faster and movements are going faster than they really are, because the realization, you take a step back and see this country overall, and how backwards it actually is, but being here you can be easily blinded,” she tells THR.

Other Museum of Weed highlights include a recreation of an AIDS patient hospital room and of the Cannabis Buyers Club, the first public dispensary in the U.S. in San Francisco, as well as a “Plant Lab” to explore the scientific aspects of the plant, smell the different types of terpenes (oils) and cannabis’ effect on the human endocannabinoid system.

“People have been thinking about this for a long time. We felt like it’s really important, and there’s a gap in the cannabis space with this type of education. We decided to do it now because with over half of the nation with legal medical marijuana programs or some type of medical programs implemented, it just felt like the right time to really be educating people,” Donegan says.

2 p.m.: Updated to clarify the event was held in Los Angeles.