“A friend of mine had a vintage store in Soho and Woody Allen’s people came in and they were interested in getting things for their [1983] movie Zelig,” recalls Uffner. “My friend said, ‘You know my friend has a lot of 1920s, maybe you want to visit her,’ so they came to my apartment and they bought everything I had off the rack.”

Ever since, Uffner has been supplying authentic period costumes to Hollywood films from her extensive vintage collection. She has worked on over 250 films and TV shows, from Out of Africa and The Color Purple to The Great Gatsby and Law and Order, as well as several Oscar nominated films this year, like US vs Billie Holiday and Ma Rainey’s Black Bottom. Uffner rented about 150 pieces for Ma Rainey’s Black Bottom and Taylour Paige (who plays Dussie Mae) wear a brown silk-chiffon and lace dress from the rental house in the film.

Fuzzy Slippers and Her Mother's Famous Peach Cobbler: How Andra Day Celebrated After the Oscars

“We have a lot of eccentric things,” Uffner says of her collection of several hundred thousand items. “We have women’s, men’s and children’s clothing, and aside from that we have shoes and purses, we have period luggage, we have jewelry, watches, walking sticks, parasols, ties, scarves, gloves, cuff links, eyeglasses going down to the early 1800s, we even have goggles.” 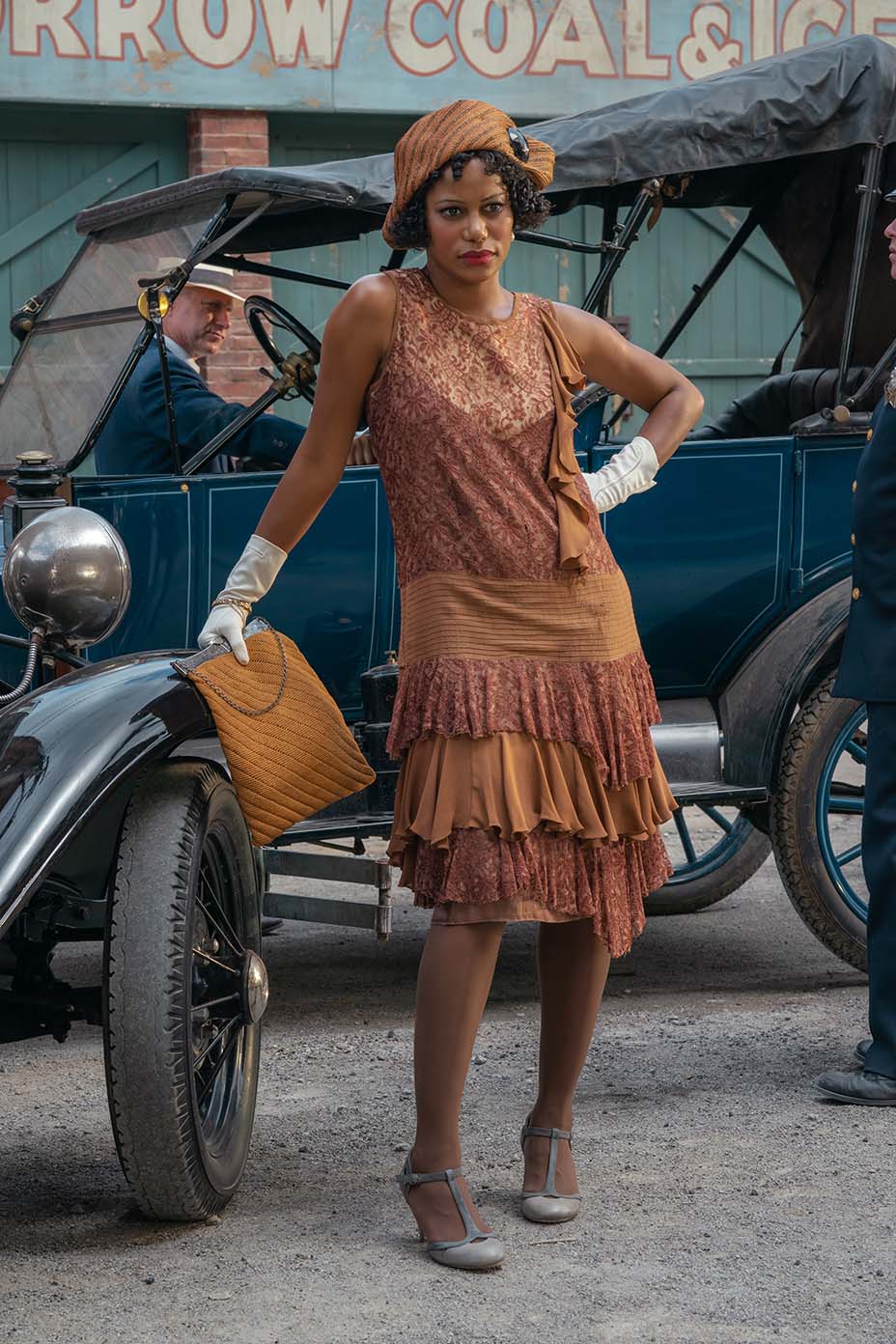 In addition, Uffner has amassed authentic fashion packaging, including period shoe and hat boxes, which have been used in shows like The Marvelous Mrs. Maisel and a store window in Men in Black 3. Her collection is the last large costume rental house in NYC, with others lost due to financial pressures including the dearth of affordable commercial spaces. And though she originally bought from flea markets and antique fairs, most of Uffner’s new pieces now come from estate sales, and from people reaching out to her with beloved items.

“My mother instilled in me an appreciation for really fine workmanship,” says Uffner of her collection’s beginnings. “She always showed me how beautifully things were made by hand.” Uffner began going to thrift shops at a young age, buying pieces for their beauty as art objects rather than wearable fashion items. Her first was a 1920s dress at a flea market for $5, followed by a $20 hand-embroidered Edwardian piece, both of which are still in her personal collection.

Her fashion education is self-taught, though she was an art major in college. Says Uffner, “I always ask a lot of questions. When I started enjoying and collecting vintage, I bought a lot of books. I think by reading history and asking people who lived through those times, that became the way of educating myself. 99.9% of what I have is all authentic, I’m pretty good at judging myself.”

Uffner realized her collection could become a business fairly early on, but she lamented selling these beautiful pieces she had worked so hard to find. “The idea came to me: what if I rented instead of sold, so I’d get the items back and still make money? I had a lot of friends in theater and they would want to borrow things from me all the time, so I knew there was a need for it.” Over 40 years later, the company and collection are still growing. 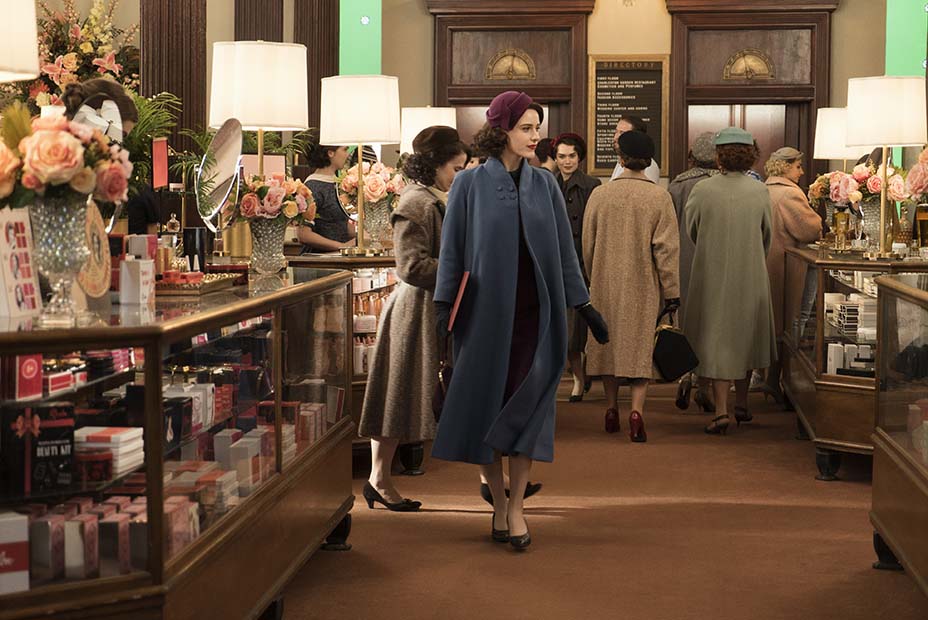 “It’s always better to wear something authentic in the show rather than have something made to look period,” Uffner insists. She treats each garment with immense care when laundering, though well-made pieces rarely fall apart. However, some productions require clothing to get wet or dirty, and shooting some scenes puts a lot of wear on clothing, thus a number of Uffner’s pieces have also been rented to be copied. “Some things are really delicate like silk. If you’re wearing it on stage or in a scene, and you’re rolling around in the mud, you don’t really want to wear the real garment, so the real garments will be copied for that purpose in duplicates and triplicates.”

Uffner is adamant about this, and has been from the beginning, to the point where she has turned projects down due to the possibility of her garments being damaged. “When they were doing The Titanic,” she remembers, “somebody had called me and said that they needed a lot of period clothing and I said, ‘Can you guarantee me that it won’t end up in the water?’ And they said, ‘No, I’m sorry, we cannot guarantee that,’ so I turned it down.”

The same principle goes for items that actors keep: “We’ve done a lot of movies with Robert De Niro, like half a dozen movies. The thing about Robert De Niro is he has a clause in his contract that he gets to keep everything he wears, so you don’t really want to fit Robert De Niro with your clothing. Lately someone called me that they wanted some 1930s suits and they said it was going to be for Robert De Niro, and I said, ‘Does that mean he’s going to keep them’ and they said, ‘Probably.’ And I said, ‘I’m sorry, I just can’t help you, I can’t spare any.’ So as much as I would love to say he wore my suit, I had to say no.” (A representative for the actor tells THR, “De Niro donates all of his costumes to the Robert De Niro Collection at the Harry Ranson Center at the University of Texas, Austin.”) 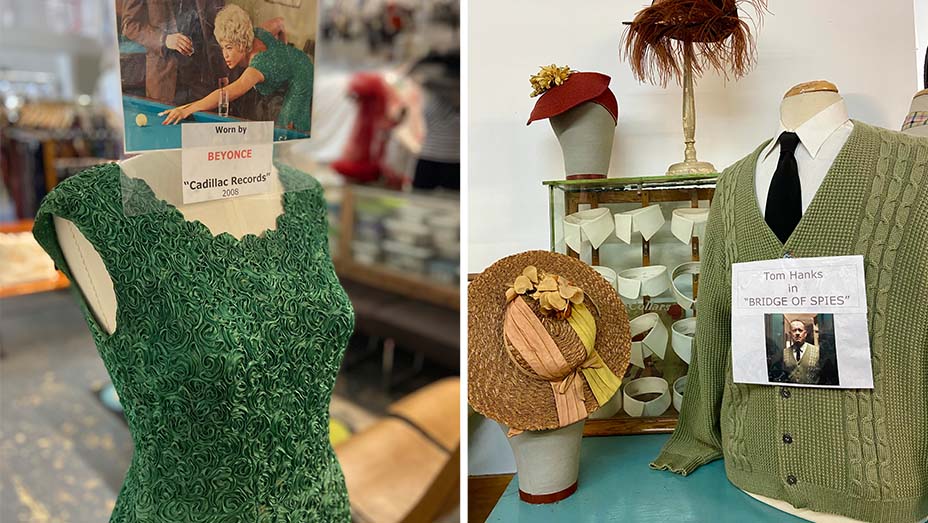 Uffner’s upcoming projects include the star-studded murder mystery Death on the Nile, currently set to premiere in February 2022, and HBO’s new period drama, The Gilded Age.

Vintage clothing has become more and more popular, but collecting on Uffner’s level is a craft in and of itself. To buyers and collectors just starting their venture into vintage, Uffner suggests that research is key.

“If this is something they want to wear themselves, they should decide what silhouette looks best on them and then concentrate on that decade or a couple of decades that they look good in. They should turn it inside out to see whether the construction is strong. They should look at stains to see whether they’re able to be laundered or not. You really have to look for moth holes, because if you have one moth hole, once you dry clean it there may be more that pop up. I would probably take a tape measurer, because some places where you’re buying won’t let you try things on, so you can measure things and get an idea of whether they’re going to fit you or not.”