Anna Robbins is just as thrilled as any Downton Abbey fan to see the cinematic update of the wildly popular miniseries when the film opens in theaters on Friday. “I’m going to be in L.A. this weekend, and it will be amazing to get a real sense of seeing the film with an audience,” Robbins said on Wednesday during a call from her native London, adding that the transition from TV to motion-picture screens also comes with advantages, especially in her role as costume designer. “There will be so much more of the costumes to see. Everything is going to be bigger, and the detail so much more visible — from inches high [on television] to meters high. It doesn’t get better than that.”

Robbins has been designing costumes for the Emmy-winning series since season five, and she has loved the job for a variety of reasons. “The 1920s is my favorite decade of all time, so it’s pretty incredible to be given the budget and the time and ability to make these costumes from scratch, often from vintage fabrics,” she told The Hollywood Reporter. “And then you’re working across so many characters, across seasons, across class and different events, at afternoon tea, dinners and grand balls. It’s a very rich and varied tapestry.” 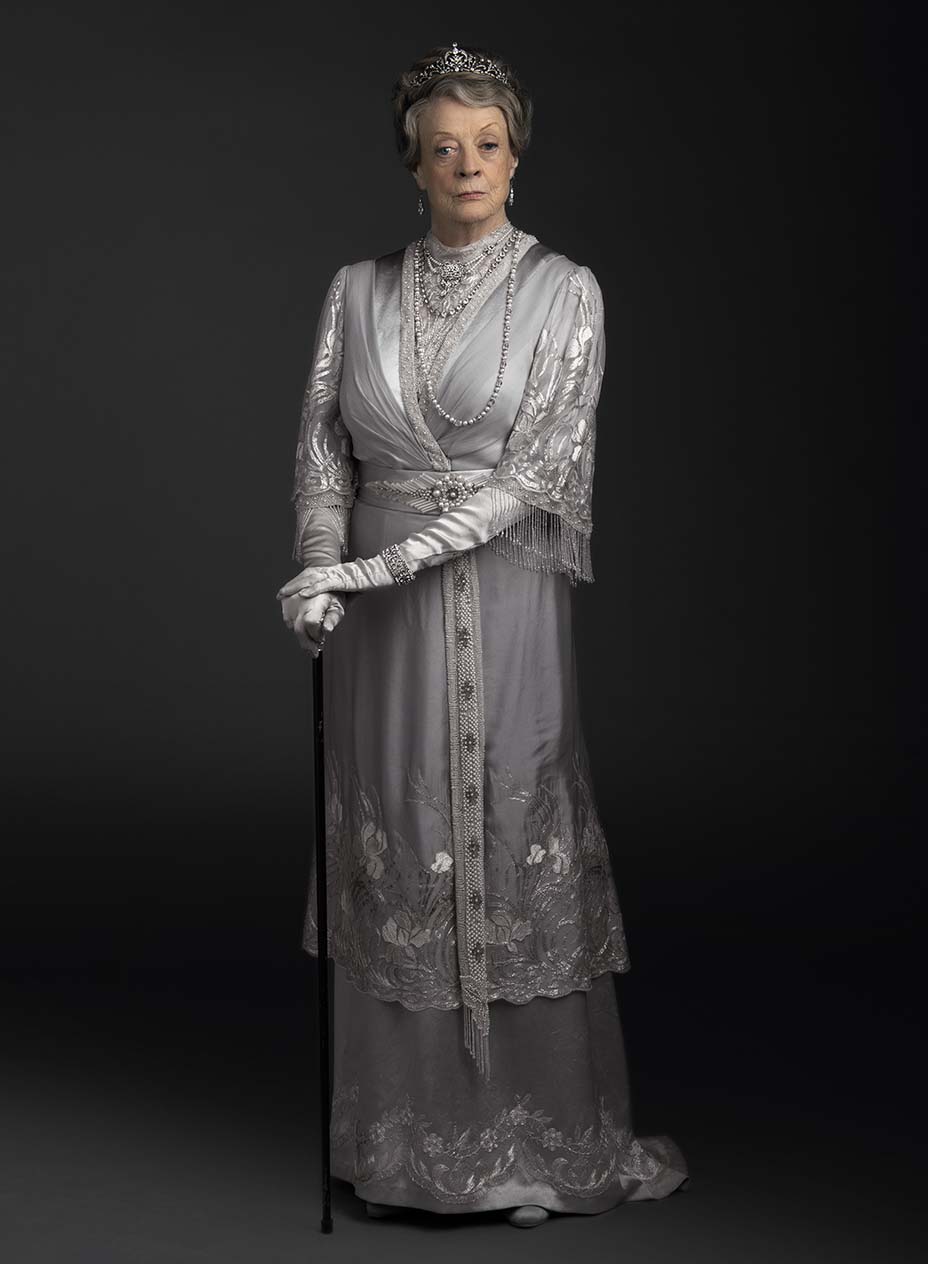 Downton Abbey’s television run wrapped in the U.S. in March 2016; a little more than two years later, Robbins was back in her workroom, prepping for the film. Much of the plot has been kept under wraps, with only one major script detail shared: that the Crawleys and their famed manor are expecting a royal visit from King George V and Queen Mary. That storyline alone upped the ante on the costume needs.

“It’s very different when real-life people are involved, and especially when it’s members of the royal family,” Robbins pointed out. “Luckily there are so many visual references and great research tools to fall upon to make sure the characterizations are captured correctly, but that also means there are a lot of images to which you’ll be compared. There was real pressure to get everything right.”

In addition to a treasure trove of books and resources like London’s Victoria and Albert Museum, Robbins also worked with Alastair Bruce, historical advisor for both the series and the film.

Simon Jones and Geraldine James play King George V and Queen Mary; to maintain an element of surprise for audiences, the production has declined to release any advance images featuring the pair. Robbins allowed that designing costumes and jewelry for the character of Queen Mary, a monarch who loved her jewelry, was a delight. “There are pieces that you still see in [her granddaughter] Queen Elizabeth II’s current jewelry collection, pieces that would have been in Mary’s possession at the time the film takes place,” she explained. “It was a great opportunity to recognize how this heirloom jewelry is passed from monarch to monarch.”

The key piece in that idea is the Vladimir tiara, which dates to 1874, and was acquired by Queen Mary in 1921. Crafted of interlocking diamond circles with pearl drops, the tiara was sent by Queen Mary to the House of Garrard, appointed the first official Crown Jeweler almost 80 years prior by Queen Victoria; it was at Garrard where the tiara was retrofitted so its pearl drops could be removed, and 15 pear-shaped emerald drops could be worn instead. When fitted with the emeralds, the tiara becomes part of a parure, or matching set, of jewels famously known as the Cambridge Emeralds, comprising the tiara, necklace, earrings, bracelet and brooch. The tiara is noted to be among Queen Elizabeth’s favorite jewels, and with the emeralds has been worn to formal events that include a state dinner for Ireland’s president in 2014. 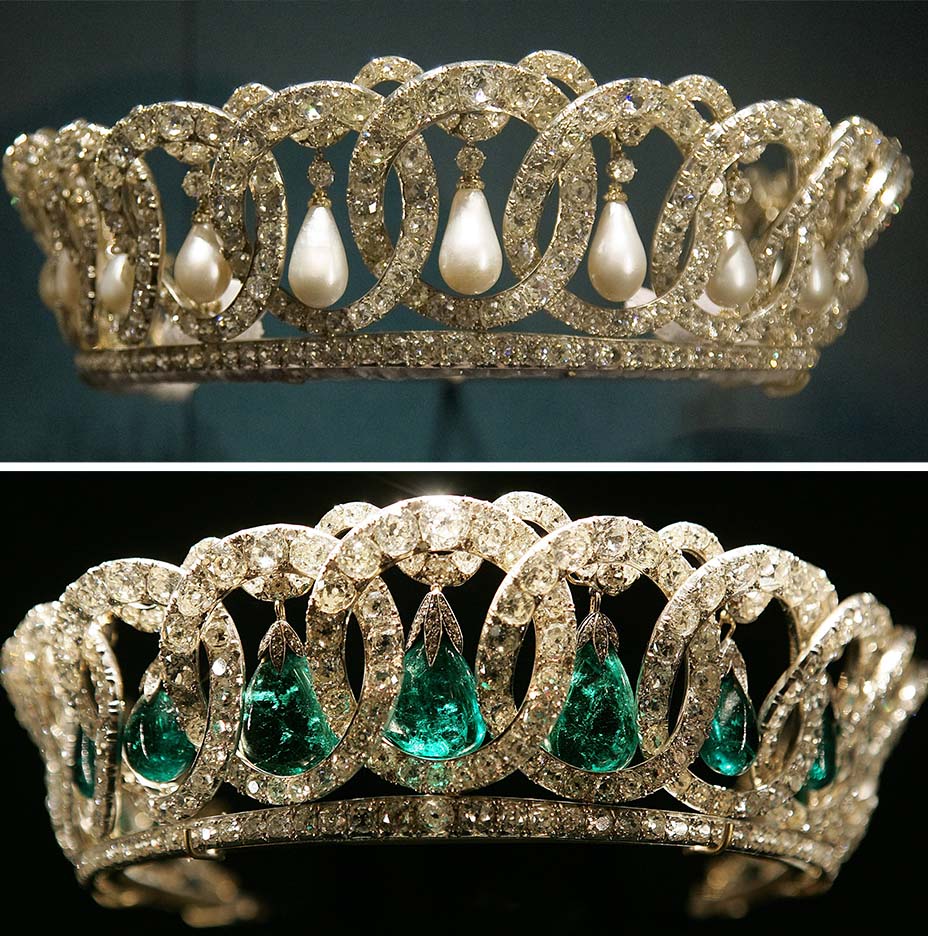 “It’s an incredibly famous tiara, so it was a thrill to be able to reproduce it, but also a responsibility to make sure it was done in such a way that it honors the original,” Robbins said. The final design features roughly 1,100 stones, primarily foil-backed Swarovski crystals, as opposed to the 1,900 diamonds found in the original tiara, while the “emeralds” were crafted of pigmented epoxy resin, polished to a high shine and mounted in pewter.

Robbins worked with a variety of specialists in both sourcing and creating jewels for the film, starting with Martin Adams, a jewelry craftsman and model maker who is based in Birmingham, northwest of London, and whose past work includes The Young Victoria and Dangerous Liaisons. “He would make these three-hour return trips to drop off diamonds for me,” Robbins said. “He did more than jewelry — our king and queen also wear medals and decorations as part of their evening dress, and Martin is wonderful with anything that involves a military aspect.” 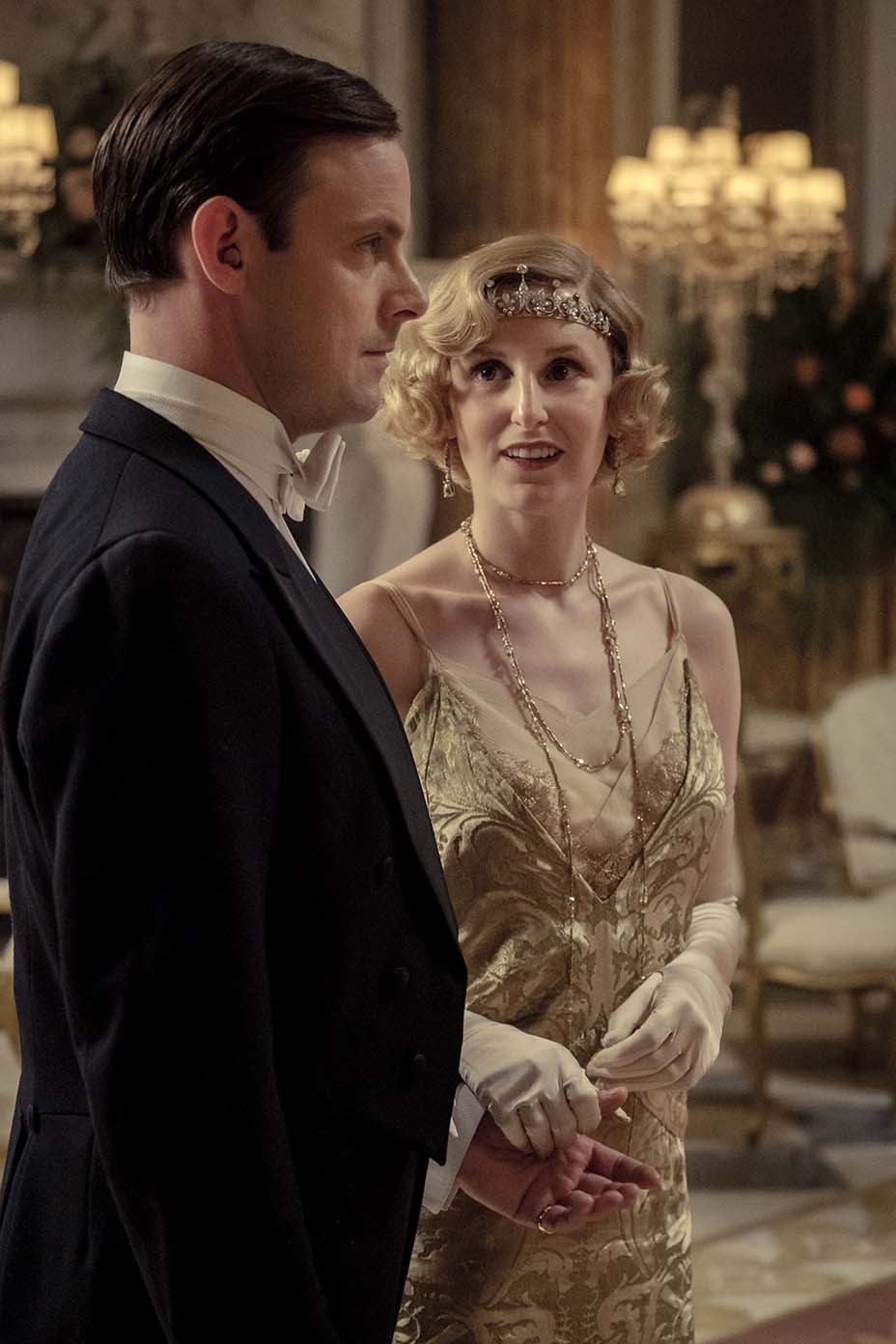 London-based vintage jewelry specialist Sophie Millard also contributed several pieces worn by the entire cast. “Sophie is amazing — if I was looking for something very specific, she might pull it out of a drawer, or she might make it for me,” Robbins said. “Proportions can be very important in jewelry — how long an earring should hang below [Lady Mary’s] bobbed hair, for example. But we were able to make some amazing things happen.

That was indeed true of the looks created not only for Michelle Dockery’s Lady Mary but also for Lady Edith, Cora and Violet, played by Laura Carmichael, Elizabeth McGovern and Dame Maggie Smith, respectively. For the climactic ball scene, London-based Bentley & Skinner — another jeweler that holds a Royal Warrant — loaned a trio of diamond tiaras for the ladies to wear, dated circa 1880 to 1910.

“In the film it was wonderful for me that, now that all of our women are happily married, including Edith and [Penelope Wilton’s] Isobel, tiaras could be worn by everyone to this very formal event,” Robbins said, citing etiquette for formal dress to an event attended by members of the royal family. “To have authentic diamond tiaras from that period was truly special, but it also means that the rest of the jewelry had to stand up to that.” 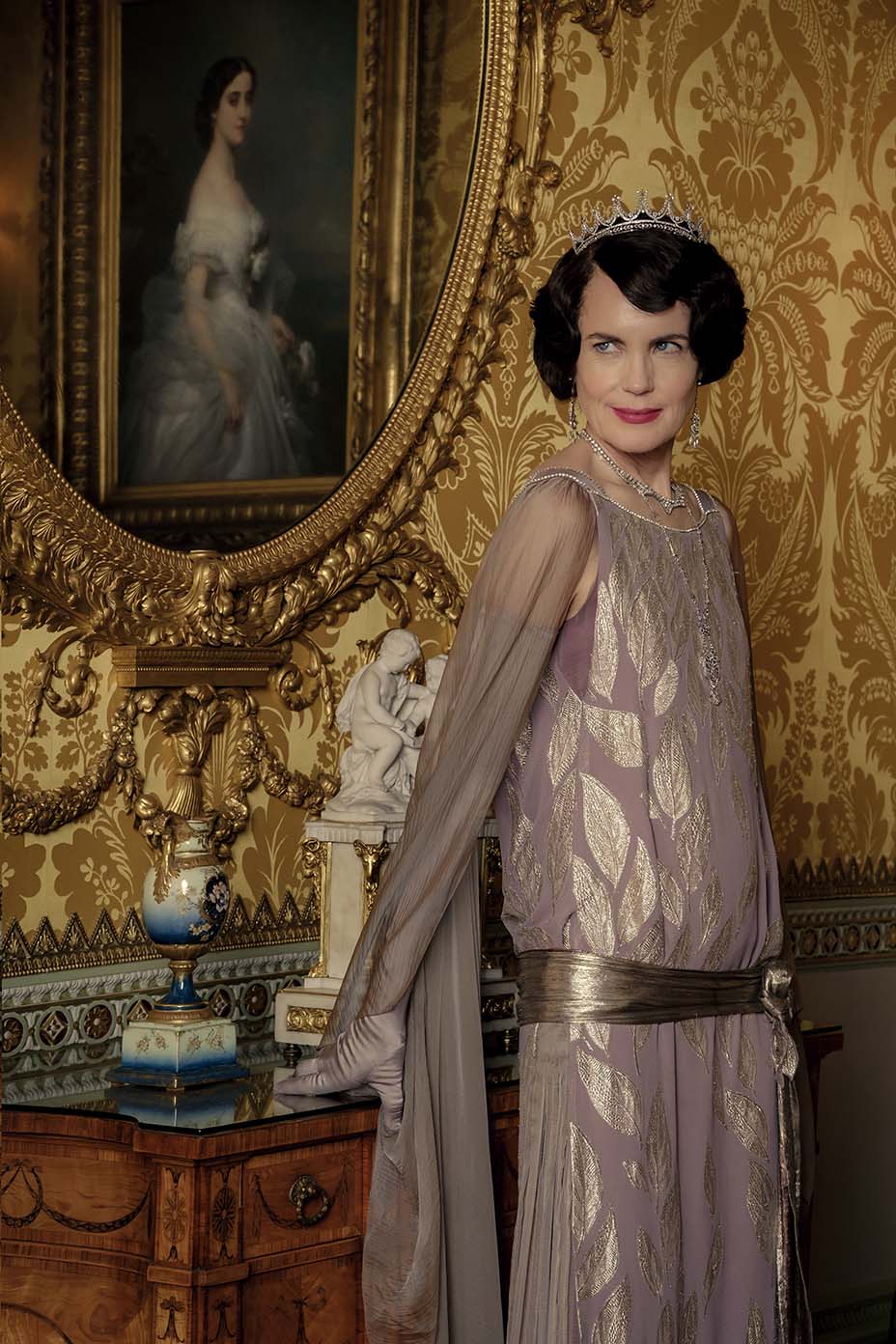 Because Downton Abbey is set in a time period in which jewelry was often layered in quantities, Robbins noted that striking a balance was integral and depended on each character. “Sometimes there maybe was the feeling of more is more,” she said. “Mary might be wearing two necklaces and a bracelet and earrings, but pieces for her tend to be quite delicate in structure. But when you come to Queen Mary, her love of jewelry is very well-documented, both the pieces themselves and how she would layer them, combining chokers with multiple strands of necklaces and brooches. Violet in many ways was put on par with Queen Mary in terms of her length of hem and neckline and the layering and structure of her jewels. We moved her forward a bit in time without moving her too far, and she wears a very traditional tiara that’s very delicate in shape and size compared to, say, the things Edith wears. And it’s Cora who bridges that gap with some of her things.”

With such intricate details making the leap to thousands of movie screens this weekend, Robbins knows that eagle-eyed fans will be paying attention. “There was definitely the added challenge of making sure everything we did stands up to audience expectations,” Robbins said. “But I have no complaints. It was a costume designer’s dream come true.”