New York Fashion Week may officially begin today, but the season’s party circuit got off to a promising start last night at a preview and reception for a new exhibition celebrating Vivienne Westwood’s and Andreas Kronthaler’s decade-long collaboration with artist and photographer Juergen Teller. Pamela Anderson, Kim Kardashian, Chloë Sevigny, Natasha Lyonne and Ashley Graham were among the crowd at the event, which occupied four floors in the British designer’s New York flagship on 55th Street, a 15,000-square-foot space that opened at the end of last year. 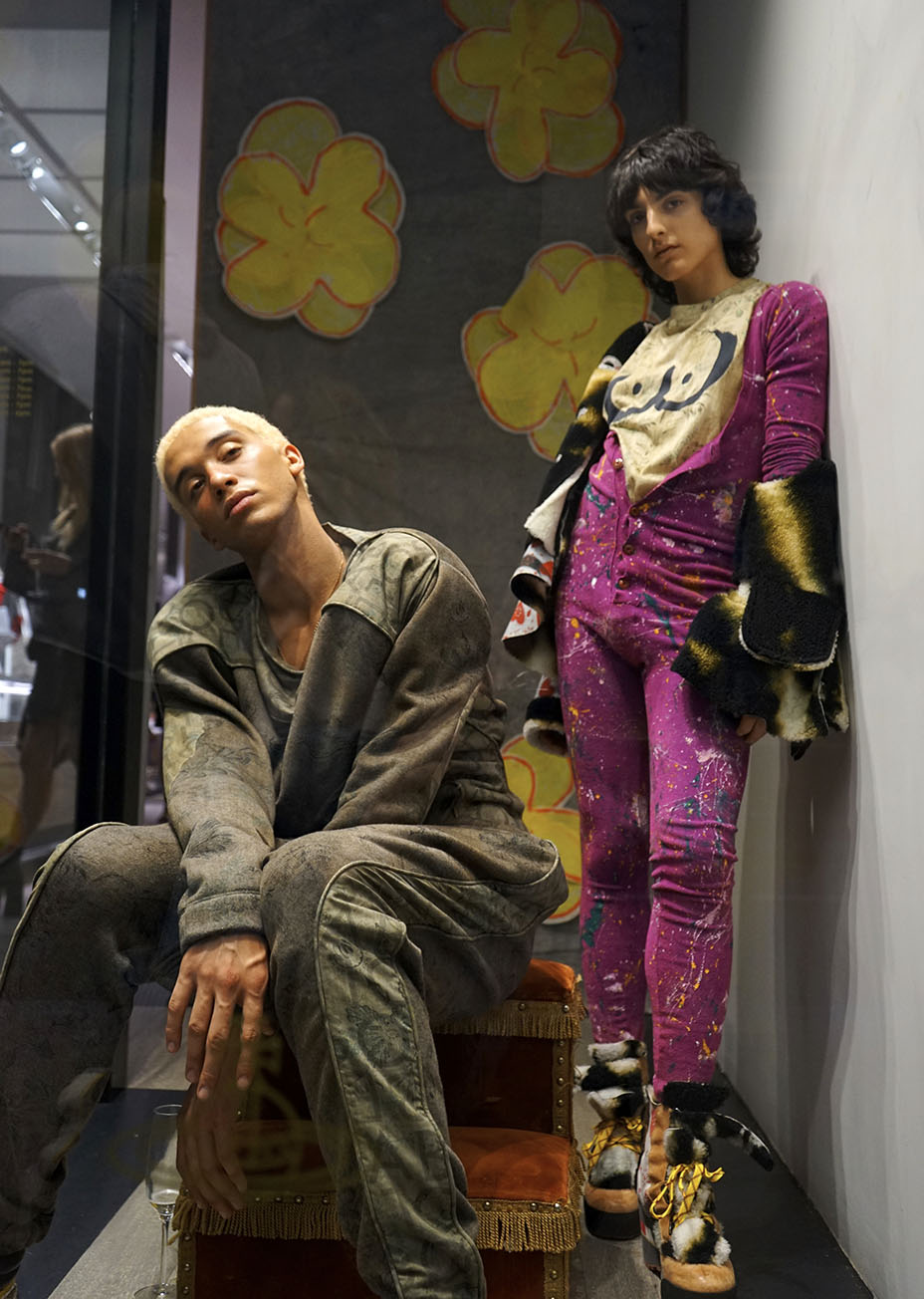 Although Westwood was unable to attend (she is between lectures in Europe), her brand’s inimitable legacy of friendship, activism and fearlessness could be felt immediately. Embodying her idiosyncratic and rebellious personality, androgynous live mannequins occasionally stepped out of their windows to gallivant throughout the Beaux Arts townhouse, picking up oversized paper crowns to accessorize along the way.

Tartans, tees and sculptural runway looks occupied the first two floors while the third and fourth were utilized as exhibition space, designed by Thierry Dreyfus of Eyesight, where modest stick pins secured campaign and editorial prints around white walls and wooden shelving. Interspersed with the commercial imagery were outtakes and personal photos the collaborators took over the years. Blurring these lines were Teller’s notorious portraits of Westwood sprawled out naked on a couch. Teller has been photographing Westwood since 1993, but he says she hasn’t changed a bit. “I think what’s really good about the exhibition is that you can’t tell which pictures were taken in 1997, 2007 or 2017,” he said. 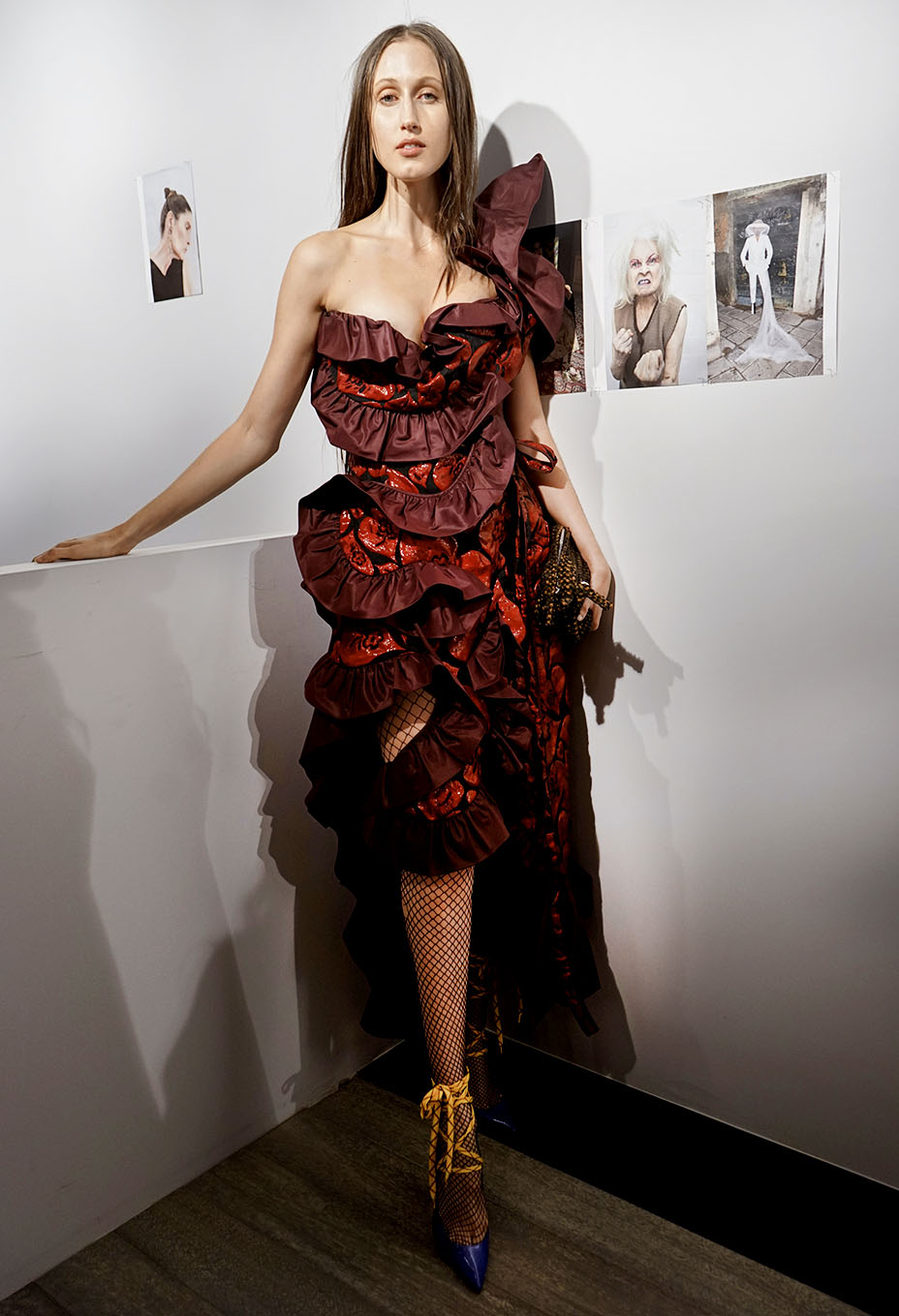 Kronthaler agreed. “These photos from ten or eleven years ago could have been taken yesterday,” he said, lauding Teller’s ability to create timeless imagery. “We’ve known each other for many years, but working with Juergen is something I always look forward to. I love the way he looks at the world. It feels right.”

Anna Cleveland was one of Westwood’s, Kronthaler’s and Teller’s many collaborators in attendance. “I was talking to my mother about how much Vivienne has come along and how strong of a presence she’s had in the industry,” she said, noting how she admires Westwood’s passion for connecting her artistry with the environment. Cleveland donned purple and yellow stilettos, fishnets and a structural burgundy Andreas Kronthaler for Vivienne Westwood Autumn/Winter 17/18 dress covered in red hearts. “I feel so wrapped in love,” she said. She referenced memories of early shoots with Teller where they both rolled around in the grass for the perfect shot.

Pam Anderson recalled meeting Westwood backstage after her 2008 Red Label show – also around the time they were both campaigning for the release of Leonard Peltier. “She said, ‘I want you in all my campaigns. I don’t have to draw you a map. You get it,’” Anderson spoke of the moment that launched her long-standing collaboration with the designer. “Every time we’re together we end up shooting some more.”

Just a few months ago, they worked together in Teller’s home in Hydra, Greece for the Spring/Summer 17 Andreas Kronthaler for Vivienne Westwood collection – the resulting images of which also hung on the wall. “Vivienne is always saying, ‘We’re hungry! We’re warriors!’ You always feel like you’re in some apocalyptic world. She brings a real energy to her work.” Even sans attendance, Westwood’s energy was remarkably palpable.