After discussing Rippon’s first Olympics and his new-found fame — including that time Sally Fields tried to set him up with her single son — the bronze medal-winner and the co-hosts talked about that custom Moschino harness tuxedo he wore on the Oscars red carpet on Sunday.

I think fashion is all about self expression and I chose to wear what I wore on the red carpet because I felt cool AF. Everyone should take risks, be bold, and not give a . It’s LOTS of fun. Huge thanks to my team for dressing me and make me feel like a sexy MF. pic.twitter.com/gimDFyJPYd

“You know I loved it,” gushed Goldberg, who herself was looking extra fashionable at the Academy Awards red carpet in a botanical print ballgown by Christian Siriano.

Speaking of Moschino creative director Jeremy Scott, Rippon said, “He is crazy, he is insane, and that embodies me perfectly.”

Adam Rippon Is Wearing Moschino Harness at the Oscars

As someone who prefers to take risks — both on the ice as well as the red carpet — Rippon said Scott was the perfect designer for the job. “In men’s fashion there aren’t a lot of options,” he noted. “A lot of times they’ll say a man took a risk because he wore a different color or it was velvet. I said [to Scott], ‘Take these shoulders off. Give me that harness and get me out to the carpet!’”

For the morning show appearance, Rippon rocked a cozy crewneck sweater featuring a flashy dollar sign (the northeast is in the middle of another snowstorm, if you recall), but it was Goldberg’s own hoodie that caught his eye. 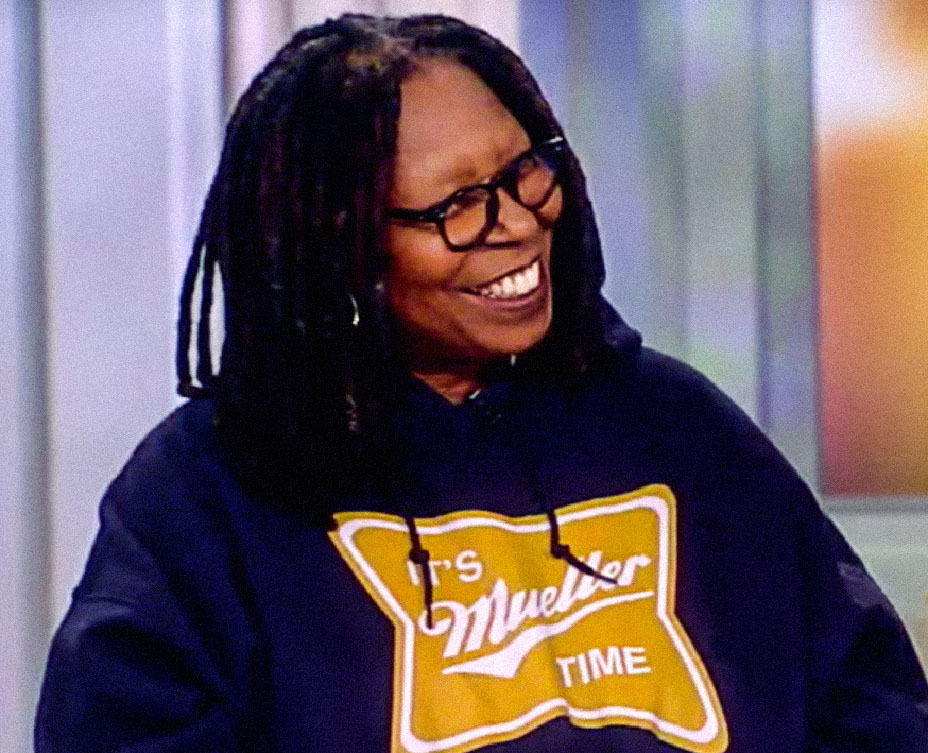 “Well I love your sweater, I almost wore that today, too,” Rippon told Goldberg of her hoodie, which featured an altered version of the Miller beer logo that read “It’s Mueller Time” — a cheeky nod to FBI Director Robert Mueller’s ongoing investigation into Russia’s involvement in the 2016 election. (Versions of the sweatshirt can be purchased on Amazon.) As a response, Goldberg gave Rippon a coy smile, but stayed mum. (Joy Behar, for her part chimed in as well: “Oh, it’s good.”)

This isn’t the first time that Goldberg’s rocked a statement-making sweatshirt on live TV. In 2016, she rocked a hoodie from buzzy Parisian label Vetements that read, “May the bridges I burn light the way.” An icon, truly.

Watch the video below: