Dave Chappelle, Ava DuVernay, Gayle King, Bob Greene and Lisa Price (of Carol’s Daughter cosmetics) descended upon the Smithsonian’s National Museum of African-American History and Culture in Washington, D.C., on Thursday to celebrate the opening of “Watching Oprah,” an exhibition about the media mogul that chronicles “how America shaped Oprah and how she shaped America.”

The evening’s 700 guests included a tight circle of Winfrey’s friends and former TV show guests, as well as the production and behind-the-scenes teams from Harpo Media, cultural influencers and activists like podcaster Deray McKesson and Today weekend host Sheinelle Jones, NMAAHC staff, and Smithsonian bigwigs and donors. (Winfrey is the NMAAHC’s biggest donor, to the tune of $21 million, according to The Washington Post.)

In a welcome speech, the talk show queen referenced her humble beginnings as well as the people — many of whom (Harriett Tubman, Frederick Douglass) already have a permanent place in the museum — upon whose shoulders she stood to be where she is today.

The exhibition starts with imagery and artifacts from the 1960s and ’70s, when black actors and personalities on TV first broke free of stereotypes and began to fight their way toward equal representation in media. It moves into Winfrey’s early career in TV news and rise in popularity, covering the spectrum of her impact, from her ability to connect with women on issues from weight loss to fidelity, through her groundbreaking conversations about racism, gay rights and sexual abuse that helped destigmatize those topics on a national scale. 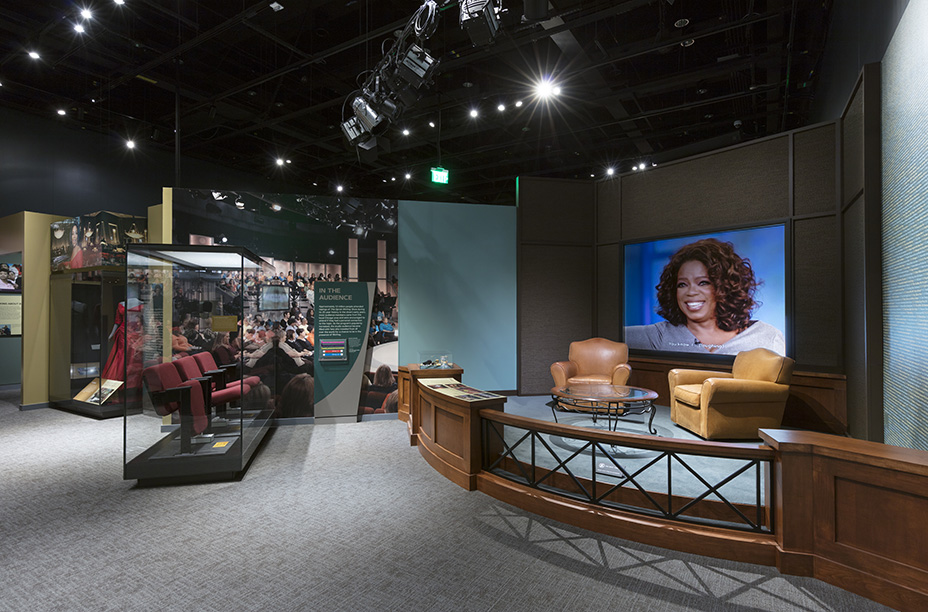 Glass cases show off on-set and backstage artifacts — original audience chairs (complete with tissue boxes tucked thoughtfully underneath each seat), microphones, Winfrey’s personal desk and onstage armchairs. Also on display are some of her most recognizable designer gowns and wardrobe pieces, including the famous size 10 Calvin Klein jeans (with a surprisingly tiny waistband) that she wore for her 67-pound weight-loss reveal in 1988.

There are iconic gifts from guests — a poncho from Salma Hayek; a purple bow-shaped hairpiece from Lady Gaga; a pair of Bono’s signature sunglasses; a journal filled out by Maya Angelou; a Rubik’s Cube solved by Will Smith; and a pair of Air Jordans from the basketball legend himself, Michael Jordan.

Notably absent? Any nod to The Cosby Show or Huxtable family, even though castmembers were featured on Winfrey’s show many times. 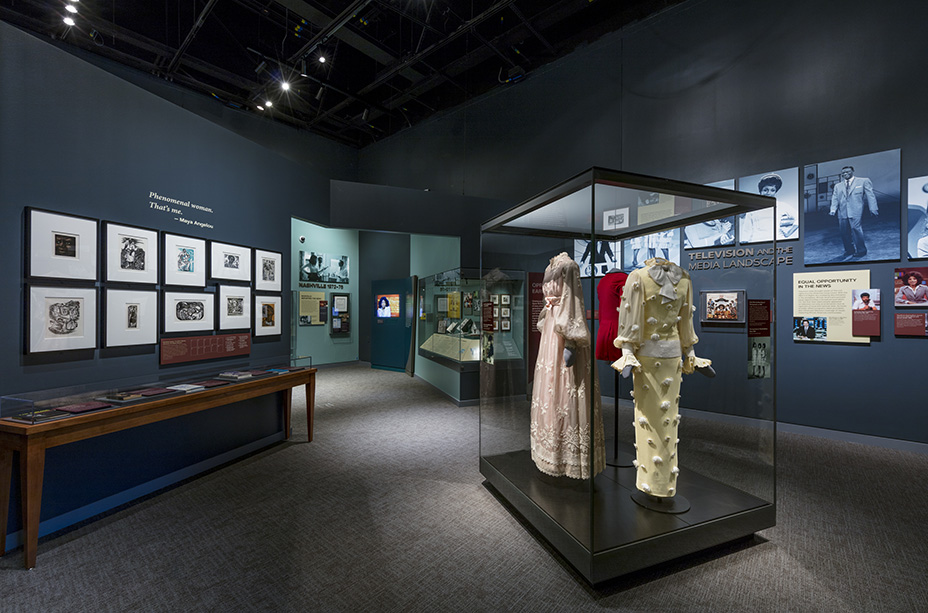 At an after-party at an undisclosed location, comedian Chappelle surprised the media giant with a toast: “To a person who society tells them that they shouldn’t be, you looked beautiful up there,” he said, according to a video posted on Gayle King’s Instagram page. “You make us brave. You make us happy. Your success is an extension of a beautiful personality. These are my favorite things. Remember your spirit. It’s a cliche now, but no one was engaging the American public like that. To be black growing up in this city” — Chappelle grew up in D.C. — “…and seeing all these slave masters’  monuments, and to see this woman stand firm, it was unprecedented. It may never happen the same way again.”

“Watching Oprah” opened today and will run through June 2019.