The Weeknd, who was nominated for multiple American Music Awards including favorite male artist and favorite male soul/R&B artist, may not have won anything on Sunday night, but between his “Starboy” performance and his newly shorn hair, he proved his power as a true pop star to transform his look and style.

Until recently, The Weeknd (aka Abel Tesfaye) was known for longer locks that diverted in various directions, creating a shape reminiscent of Jean-Michel Basquiat’s hair, who the singer has said partly inspired him. This new, shorter ‘do with height in the front and clean-cut edges made its debut in the music video for “Starboy,” where in a dark turn of events, The Weeknd’s signature strands are cut and he appears slick and powerful in a sharp black leather jacket, not unlike his look at last night’s awards show.

His groomer, Christine Nelli, is responsible for grooming The Weeknd on his new album cover and working her magic on the musician for the AMAs.

“My goal for any male is to make him look like the best version of himself,” says Nelli, who also works with Justin Timberlake. “I felt that [The Weeknd] looked amazing and really shined tonight.”

To ensure it was just his performance that shined and not his skin, Nelli used an arsenal of ReVive skincare products, plus some concealer and powder from Laura Mercier to even out the skin and combat sheen. 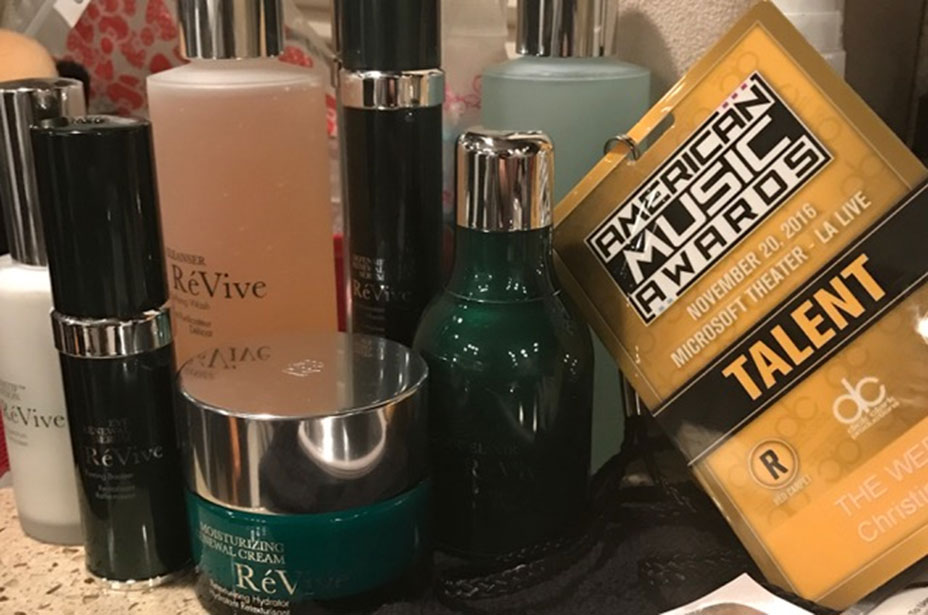 After cleansing his skin, Nelli massaged ReVive Eye Renewal Serum into the under eye area in order to hydrate the skin and reduce the appearance of any fine lines. Since she states she always pushes her male clients to moisturize daily, she often mixes face oil and lotion together to amp up the hydration. On The Weeknd she mixed ReVive Rescue Elixir Anti-Aging Oil and ReVive Defensif Renewal Serum and applied it with her fingertips to the skin, rubbing in circular motions all over face and neck.

For a man with facial hair, Nelli says they need to prep their whiskers with a good oil, or a more natural alternative like coconut oil to give it softness and control. “If they have a beard and it is unruly, I recommend a beard balm which can also be used on a mustache.”

'I Dream of Jeannie' Ponytails Sweep the AMAs Red Carpet

To finish the pop star’s AMAs look, Nelli applied a gel bronzer followed by ReVive Le Tint Moisturizing Veil in Light to Medium all over his complexion for a subtle coverage.

“For any performer, my go-to product is a matte foundation or tinted moisturizer that is matte to help reduce sheen from the lights onstage,” says Nelli, who followed the Le Tint Moisturizing Veil with Laura Mercier’s Shine Control Pressed Setting Powder to eliminate any dewiness. Eyebrows were set with clear gel mascara.

To hydrate his lips for his performance, she applied a layer of ReVive Intensite Moisturizing Lip Balm Luxe Conditioner. “Some of my clients that walk the red carpet always want to make sure that lip balm is on deck,” says the groomer. “There is nothing worse than having dry lips.”