Costume designer Stacy Jansen was preparing to film a scene for Wendy, a modern-day spin on the childhood classic Peter Pan, set on a gray beach at the base of a tall cliff in the Caribbean. Crewmembers had to hike down to access the spot, with some putting supplies on their back to carry down. But not everything was safe to carry, so the day before, the filmmakers packed the costumes into a suitcase and rigged a zip line to let the wardrobe sail down to the shore.

“[We] watched it travel from the top of the cliff all the way down into our open arms, and then we set up there on the beach,” Jansen tells The Hollywood Reporter.

It was just one surreal moment among many during the making of Benh Zeitlin’s Wendy, set to bow Friday in theaters, that sets the story of Peter Pan on a mysterious, isolated island that promises eternal youth to lost children and where an elusive creature dwells deep below the sea as their protector. Filming on the island of Montserrat and in Mexico, Jansen contended with the natural landscape as she thought about how the cast of mainly child actors would dress within the raw, elemental setting that Zeitlin conjured for his retelling.

For a scene in a freshwater underground cave, Jansen put on a wet suit, packed the costumes up in waterproof bags and carried a sewing kit on her waist. “We’d go in these caves and spend the day in there. We’d have to swim in 10 minutes or so and then bob around in a life jacket while we were shooting,” she explains. Wendy’s (Devin France) costume fell apart during the filming, so while treading water, Jansen had to stitch it back together. “It really spoke to a lot of things we had to do on that film, making things happen in the moment however we could,”  she says.

Mother Nature’s challenges helped the crew create authenticity when depicting how the remote locale would have impacted the clothes of Peter, the Lost Boys and Wendy for the Searchlight film. 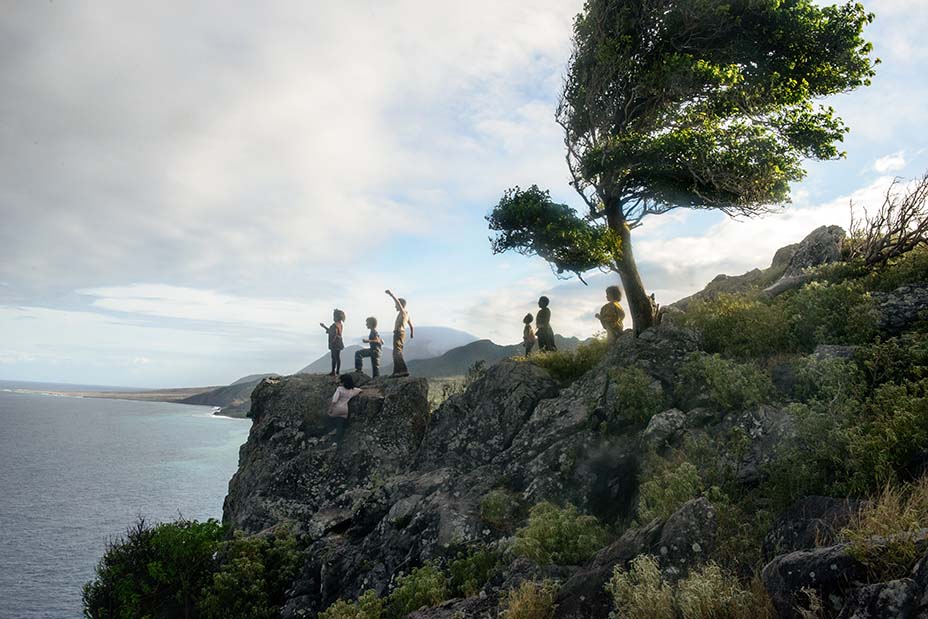 “The crew in the Caribbean was on a very similar journey to the kids in Neverland, in that we were also on this adventure with them. We were running through the jungle with them. We were climbing into the caves with them. We were scaling the cliffs. And they were foraging for their clothes and we kind of had to, too. That changed how we were designing,” Jansen says. “For both Peter and for Wendy, we really understood what the costumes were and how they would work once we got to the island where we were going to be shooting. Neither of those costumes had fully been established before we arrived on the island.” 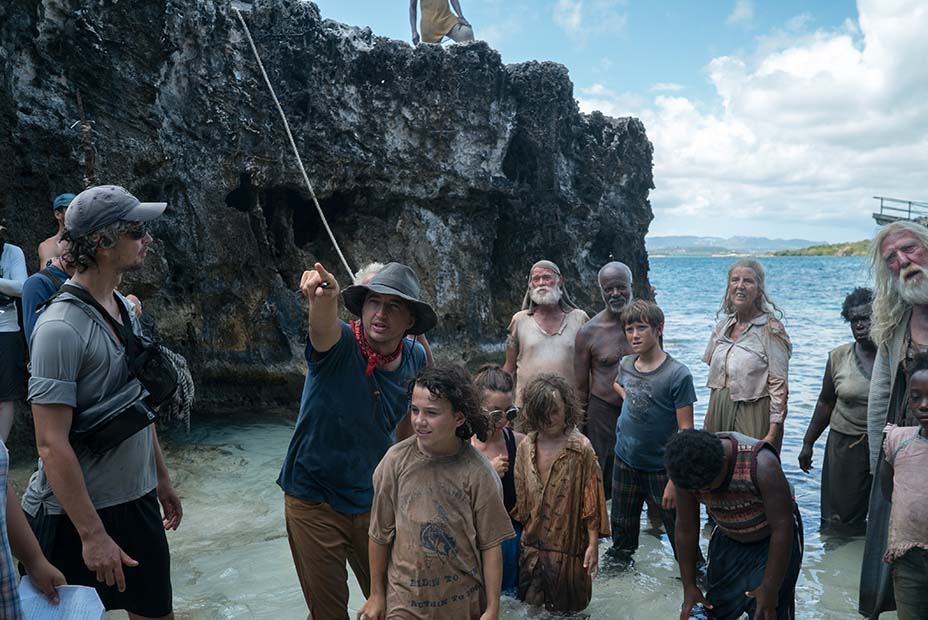 The resulting looks include a school boy uniform for Peter (Yashua Mack), comprised of a maroon blazer with an embroidered patch and pockets. After purchasing about five of the jackets online, they used a belt sander to give them a worn-down look and completely took apart the jackets at the seams and sewed them back together for a rustic effect.

“He has been on the island the longest, so it had to feel maybe the most distressed out of everything,” she explains.

Though Jansen deviated from Peter’s signature green ensemble, the red blazer helps distinguish Peter from the other Lost Boys: “Peter’s jacket is meant to make him feel a little bit like a little king. He’s Peter Pan after all.” And there’s perhaps a bit of an homage to the animated Peter Pan through the footwear. The costume designer tells THR, “Something about Peter’s shoe reminded me of a slipper that Peter Pan wears. It’s a very different take on it. Peter’s shoe is a torn-up sneaker that’s patched back together with twine. But something about the tongue flapping out, it was a very similar shape to me.”

Viewers also won’t see Wendy’s classic baby-blue nightgown onscreen. Instead, the character wears a faded T-shirt to bed and later to the island with jeans. Reading “Prison Rodeo” in reference to a Louisiana event, the tee ties back to a scene in which Wendy’s mother reminisces on her own dreams in life and interest in rodeos.

“It’s one of the few things in the film that cements it in a time and place. The decision to have Wendy wear that shirt comes from the idea that her mother has aspirations of this life that she wanted to lead,” Jansen says. “Wendy takes that persona on, wears that shirt to bed and then leaves in it, [which] alludes to the fact that she also wants all these grander things and is potentially a little more equipped to get them for herself.” The T-shirt highlights a familial theme in the film through the passing of the torch from mother to daughter.

Jansen had 20 of the rodeo shirts made in New York using a graphic she got online (by the end, only one shirt was left intact). They were dyed a “periwinkle haze” color to look like they had gone through the wash over the years. The warm tint only got darker due to both artificial dirt that the filmmakers added and real dirt during the filming process.

A last-minute addition to Wendy’s wardrobe were her green earrings, which belonged to the actress. Zeitlin suggested the accessory after seeing all the kids in costume together. “The idea there was that Wendy should have something — a little bit of a glimmer, a little bit of a sparkle — her own kind of thing that makes her stand out,” Jansen says. “In a film where the gender roles are so different from what you may expect [with the Lost Boys] … it was interesting to have a traditionally female accessory on Wendy, something that set her apart and might be interpreted as girly, when all of her actions would say otherwise.”

After ?France’s personal earrings were officially added to Wendy’s look, Jansen needed to find supplies to make more copies of them. “The ones you actually see on her are about eight different earrings. So we had to learn how to replicate them ourselves,” she explains. The crew browsed flea markets and scrounged through their belongings to find a bracelet or a piece of jewelry to tear apart and recreate the little green beads. Throughout filming, they also received about 15 deliveries via planes from the mainland. A few weeks into shooting, Jansen finally got enough supplies to replicate a few pairs. 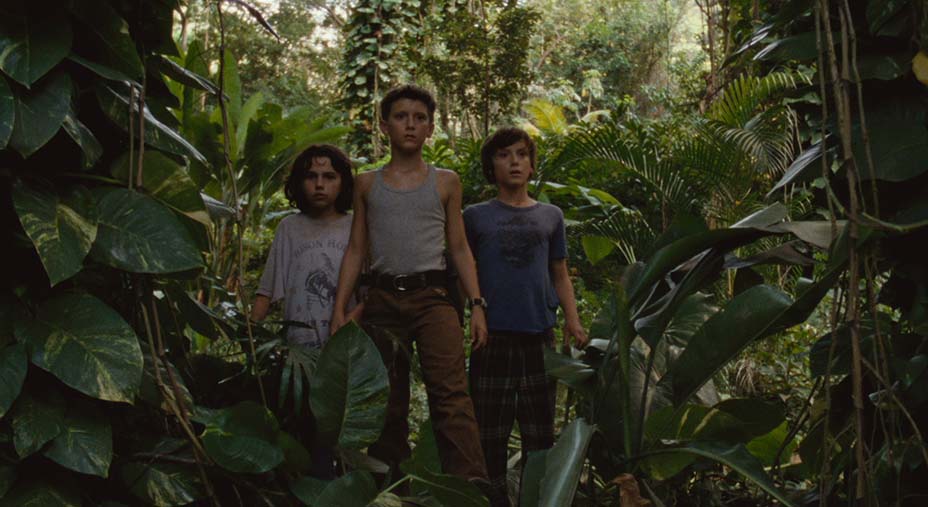 For the Lost Boys, Jansen and her team custom-made several pieces and hand-dyed many, from pajamas to a sweater vest. One boy wears Velcro sneakers, dinosaur-print leggings and a leopard-print, oversized men’s shirt — a look that epitomizes how children creatively style themselves. That came together after they photographed a leopard print shirt they liked at a thrift store and had the design reprinted onto fabric that was made into men’s shirts in different sizes to try on the actor. “We wanted to bring the wildness of the characters when we thought about the costuming,” Jansen says.

Without the help of pixie dust, Jansen had plenty of her own island adventures getting the whimsical costumes just right. 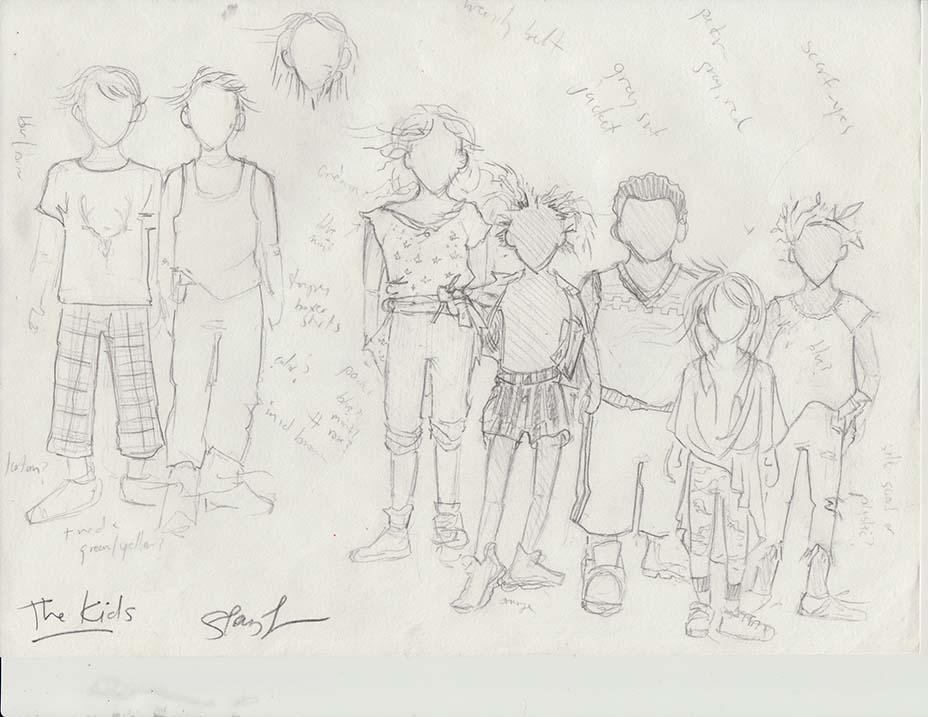