If I could do it all over again — if a wrinkle in time allowed me to redo Tuesday from scratch — I would have coated my elbows with lotion in the morning, and probably added another layer in the afternoon. So much lotion. At least the left one, the left elbow, because that’s the one Madonna touched as she drove home a point about what most men get wrong about skin care.

“Men need to understand that they need to moisturize. They can’t go around being hairy beasts all the time. I tell that to my sons,” said Madonna, standing inside a private suite converted into a junket-style interview space on the second floor of Barneys New York, Beverly Hills. “You can actually get acne from having too dry skin. So, it’s important to take care of your skin. I don’t know why they don’t. They can just go around shaving and not bathing, and we have to do all the work! That’s not fair. When I touch a man’s arm …”

'A League of Their Own' Hits 30: Stars, Writer on Studio Battles, Mystery Ending and Why the Sequel Script Died

That’s when the 59-year-old global superstar turned activist turned skin care mogul, dressed in a Temperley London jumpsuit with Mindi Mond earrings, reached for my left arm, the one flaunting a desperately dry elbow, and ran her fingers toward the unfortunate joint. You know how this ends, but at least it came in the final moments of a 5-minute, 40-second interview because recovery may have been impossible.

“I don’t want … your elbows are a little dry, OK …,” she says, quickly pulling her hand back, the one covered with Kismet bling on each finger to spell out MDNA (and a Yeprem handpiece), the same name of her luxury skincare line, MDNA SKIN, which is what she’s here to promote just after 6 p.m. on March 6, 2018. I immediately apologized for the “error” that landed me on the “most men” list by offering the fact-based excuse that I had basically been working 24 hours straight covering Sunday night’s Oscars through Monday night print deadlines.

“Well, we’re all still a bit dehydrated from Oscar night,” explained Madonna, who had better reason than I since she hosted another iteration of her annual Oscar party at manager Guy Oseary’s Beverly Hills estate where the crowd included Kim Kardashian West and Oscar winners like Sam Rockwell. That event featured a private performance by Cardi B. and a photo booth overseen by French artist J.R., who was nominated for best documentary for his work with Agnes Varda on Faces Places and someone who probably has very nicely moisturized elbows.

J.R.’s body parts never came up in the 90210, though, when Madonna welcomed Pret-a-Reporter inside the suite to talk exclusively about skin care because she’s a few years deep into running MDNA SKIN, a Barneys exclusive she started in partnership with Japan-based MTG. It debuted in the United States in September 2017 (after launching first in Japan in 2014) but there’s a new product, the Reinvention Cream, that has just been put on Barneys shelves and on www.mdnaskin.us. The four-in-one retails for $75 and acts as a lotion, serum, cream and mask. MDNA SKIN includes face wash, rose mist, serum, eye mask, finishing cream, chrome clay mask, rejuvenator set and a travel kit.

You could probably use any of those on elbows, too.

Madonna has said that the line is for everybody, not just women, and she has admitted to liberal use of her products on all parts of her body including her famous derriere. But the first thing she said during these aforementioned 5 minutes and 40 seconds was, “Welcome to my padded cell,” as Pret-a-Reporter stepped into the suite, which was covered in brown suede padded walls. It was quiet in there, nothing like the scene downstairs on Foundation Level where the Queen of Pop made a pit stop to greet Barneys customers, superfans and pose for a photos. (It was also nothing like the scene she would encounter later in the evening when she shared the stage with Kardashian West at YouTube Space for a joint conversation about beauty, workouts and Sunday night.)

Back to Barneys, MDNA SKIN and how it all comes full circle. About the latter — in order to achieve the same standards for this interview, let’s start back at the beginning with question No. 1 for a full transcript of how much Madonna can say in under six minutes.

How was it down there?

“It’s fun, crazy! I was never a sales person. It’s kind of a fun, exotic moment for me.”

How did the launch event here compare to the one you had in New York?

What have you learned from the MDNA launch that you applied to the Reinvention product?

“As we go, I’m learning that it’s really important to let people know about the authenticity of a product, where it comes from, and what makes my skin-care line unique. And making sure to emphasize that it’s not a vanity project, that it’s something that I really believe in and a product line that I use. I’ve always stressed that and made that very clear to people, but you can’t stress it enough in a way.”

You have said that you always paid attention to skin care even when you were a kid. Is there something you’ve learned from MDNA that you wished you had known back then?

“In Michigan, there’s not a culture of sunbathing, so I never was in the sun, I never smoked. Those are two things that I’m really glad I didn’t do. I always took good care of my skin, I don’t have any skin regrets. I may have gotten two tans in the 80’s and been forced to go to the Caribbean with my boyfriend at the time. But, you know, it’s OK.”

You have six children, famous friends and a billion fans, all of whom probably want MDNA SKIN freebies. What’s your strategy on who gets MDNA swag?

“I always share it with my friends and it’s important to share it with people who are beauty influencers, or people who can spread the message to the masses about my skin-care line, so that’s important. You have to spend money to make money, that’s just good business practice. So you have to give it away to the right people. And of course, my children steal it all the time — that’s a different kind of freebie.”

You’ve got this new product, and there are now close to nine MDNA SKIN products. Where do you go from here?

“The thing about this line is that the skin-care line, and the thermal water in this skin-care line is from Italy, from Tuscany, which is in my DNA. That’s where where I got the idea of MDNA. The Reinvention Cream, which has the resurrection plant in it, comes from Africa. What’s interesting and significant about this plant is that it can go for a whole year without water, and you give it a few drops of water and it blossoms and grows and flowers. It’s one of the most resilient plants on the planet, and it’s found primarily in Africa. I have a big connection to Africa and I do a lot of work there; I spend a lot of time there. A portion of the proceeds go to Raising Malawi, my charity organization in Africa, that is primarily focused on education and building schools and hospitals. So it all comes full circle. And it will continue to expand.”

(No word on whether that expansion will (ever) include a cream specifically for one poor man’s elbows.) 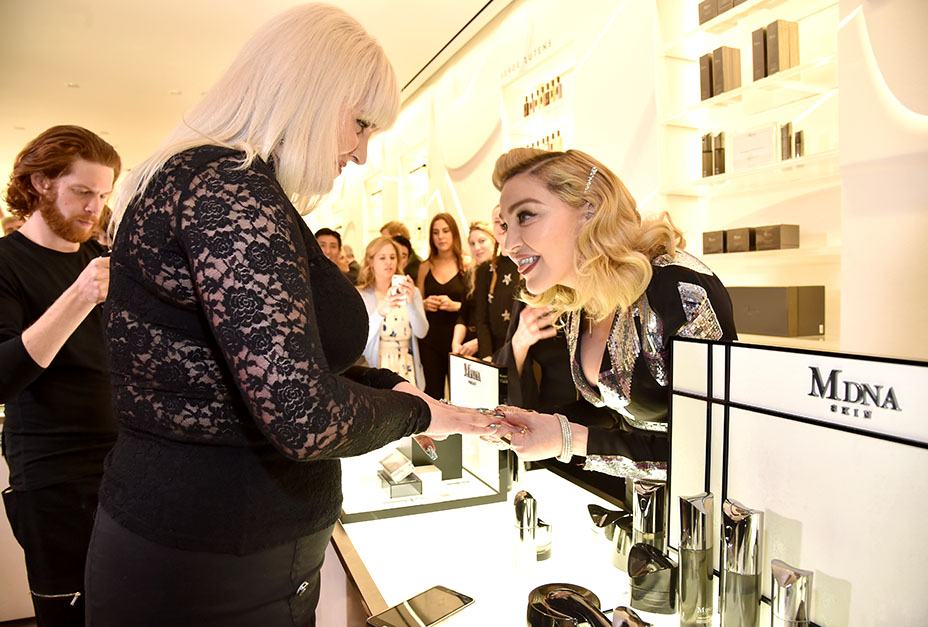 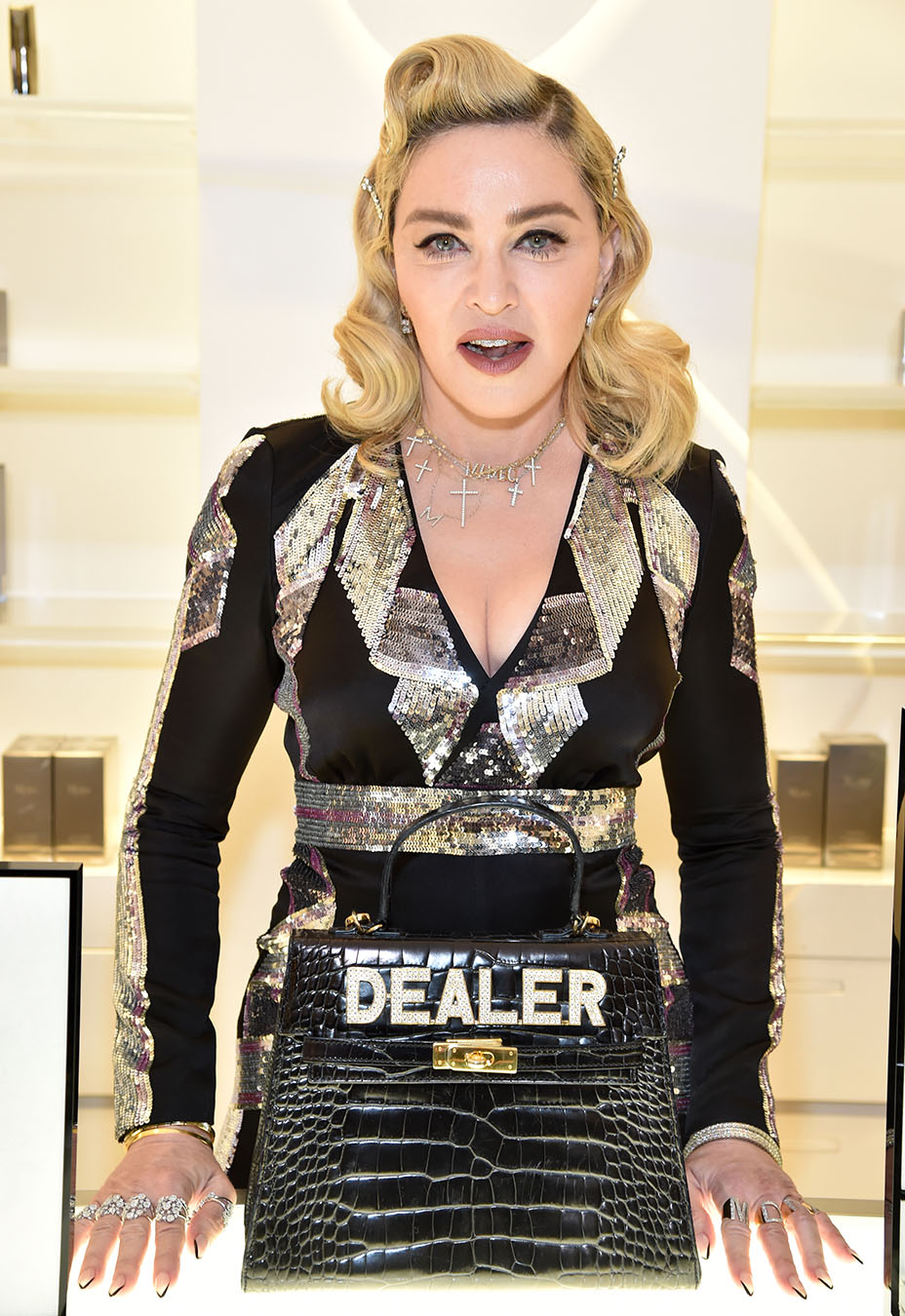 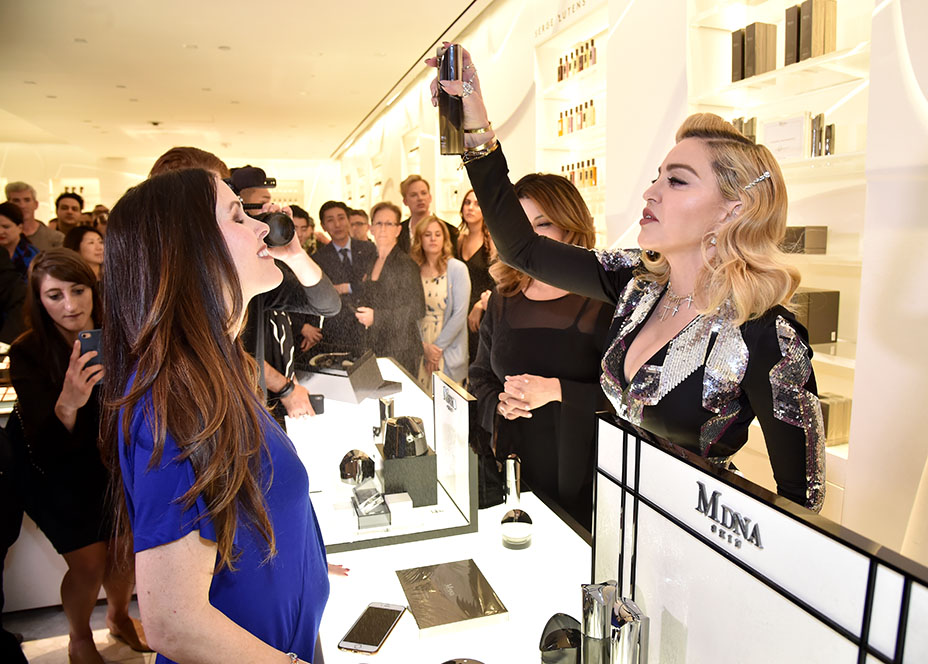