It’s not every day you see someone in Mickey Mouse ears and another in a Dodgers uniform at airport check-in in Melbourne, Australia, but then every day isn’t the maiden voyage of Qantas’ Boeing 787 Dreamliner flight from the capital of Victoria to Los Angeles. The costumes were part of the pre-trip fanfare (California-branded sunnies, Dodger hats and ears were also handed out during boarding) of the momentous occasion that makes the prospect of a 14 hour and 20 minute cross-Pacific flight quite a bit comfier. One key reason: the promise of lessened jet lag by improving air pressure and increasing humidity.

Frequent fliers may have already stepped on board a Dreamliner in 2017 on another airline, but Qantas took things up a notch for its first few aircraft, securing Marc Newson protege David Caon as the lead designer for the cabin interiors, which include 236 seats across new Premium Economy and Business suites, and improved Economy classes. (These planes will also begin flying a groundbreaking Perth-London route in the spring, and later in 2018, Melbourne-San Francisco to meet the growing need from Silicon Valley.)

It was into the latter that I nestled in special-edition Martin Grant pajamas made only for this flight — flashy in a ‘90s hip-hop way, with Qantas’ kangaroo logo emblazoned across the top in metallic silver — snug in the spacious pocket aside an expansive window. They’re a whopping 65 percent larger than on other planes for an increased sense of space (this is true in Economy too), meaning more views of the sunset or sunrise, puffy white clouds, mountain ranges and, in the case of this flight, the water-cannon salute several of Melbourne’s fire trucks gave us on the runway before takeoff.

Gone are clunky window shades, which give you all or nothing in terms of light. Instead, these windows darken or brighten with the touch of buttons, giving off a pleasing turquoise glow that approximates dusk and a deep purple hue by “nightfall.” As part of a partnership with the University of Sydney’s Charles Perkins Centre to develop a more scientific approach to mitigating the effects of jet lag during long-haul travel, they have new ways of handling lighting too. The idea is to influence circadian rhythm through wavelengths of light at various stages of the flight, encouraging passengers to sleep and wake by creating a natural cycle of sunrise, daytime, dusk and night. And the air pressure has been cut from an altitude of 8,000 feet to 6,000 feet, which is much less drying for the eyes and sinuses and means fewer swollen ankles. 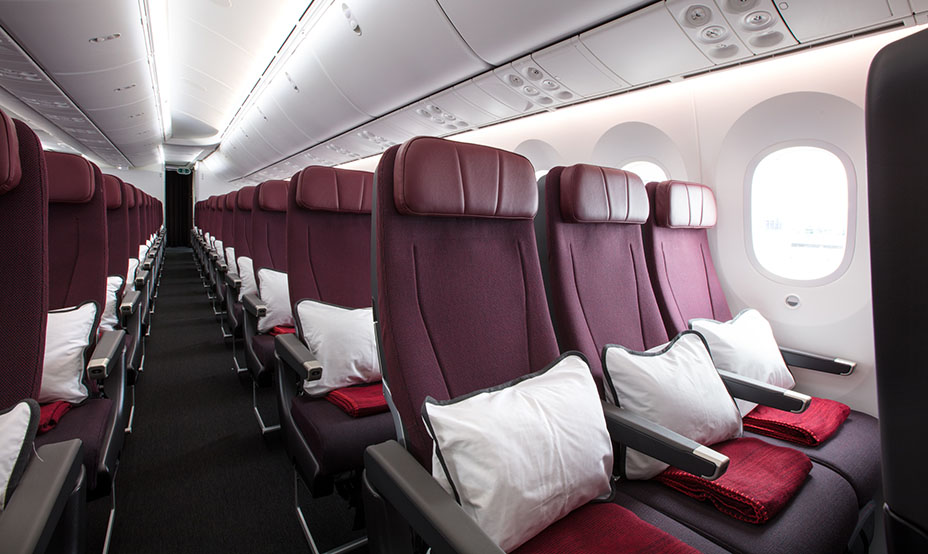 The same approach is being taken with future menus, which are created by Australia’s acclaimed celebrity chef Neil Perry, and come spring will incorporate foods that stimulate the production of melatonin, to help regulate sleep and biorhythms. Conversely, he says, ingredients like chilies with capsaicin will be used to help wake the body in the morning.

On this flight the meals weren’t perfectly timed, but the crew was still adjusting to its new digs, and there was the excitement of a milestone occasion causing delays. Still, the pre-flight champagne was the perfect start to a dinner service that consisted of savory mushroom arancini — alongside a 2015 (a particularly great year for Aussie wines) Delatite Pinot Gris — amazing hand-churned Australian cultured butter (by Pepe Saya) and sourdough, greens with Rockpool vinaigrette, and crumbed chicken with silverbeet (Australia’s trendy kale or spinach substitute) and polenta (with a 2015 Shiraz by Penfolds). Caon is responsible for the “green” tableware efforts that make the experience feel akin to one you’d have in an increasingly rare white-tablecloth restaurant. His sleek, minimalist white dishes are 11 percent lighter than previous plates, which adds up to an impressive eco-friendly savings of more than 1.1 million pounds of fuel per year.

When it’s time to sleep, even though it’s the middle of the day where I’m coming from (Melbourne), I find it wonderfully easy to doze and drift off into an REM dream state, thanks to a number of factors. One: The seat is seriously comfortable. A flight attendant tops the charcoal-gray upholstery with a padded “mattress” and with an elaborate control pad, it lies it completely flat. The large TV screen even tilts down so I can continue watching The Deuce before bed. The pillow is five-star hotel fluffy. And there’s no urgent need to slather on the products in the elegant black Oroton amenity kit (though I test the Sweet Orange Lip Balm out anyway, and apply a Dr. Barbara Sturm Hyaluronic Ampule from home for good measure) because the air doesn’t feel dry. I slept soundly even through turbulence, which was lessened thanks to Boeing’s turbulence-dampening technology.

I even wake up in the morning to customized breakfast of pressed green juice, an open-face breakfast sandwich and hot cocoa with far less of a parched throat than is normal. What’s more, the CPC provided Qantas with advice about the cabin temperature and what time it should be increased or decreased to further reduce jet lag, so forget the standard chill that accompanies many flights. The trip itself was a joy — comfortable, clean (the bathroom toilets have motion sensor flushing mechanisms, making one less germ-covered thing you have to touch) and chic — but the hours and days afterward proved the truest, and almost unbelievable, benefit: hardly any sign of jet lag.