Fashion-forward viewers of Cate Blanchett’s latest film Where’d You Go, Bernadette might recognize a glimpse of Anna Wintour in the titular character’s signature bob and large sunglasses (plus, they both have a daughter named Bee). But any likeness to the Vogue mastermind is purely coincidental — costume designer Kari Perkins instead found inspiration in Audrey Hepburn and, of course, the source material of the movie, the book of the same name by Maria Semple.

In the film out Friday, architectural prodigy Bernadette Fox has moved from Los Angeles to Seattle to have a family. Now married to a Microsoft techie with daughter Bee, Bernadette finds herself creatively unfulfilled and bickering with her neighbor (Kristen Wiig). Planning a family trip to Antarctica sets off a mid-life crisis of sorts for Bernadette to rediscover her passion and improve her mental health.

Perkins (Boyhood) looked at Seattle-based fashion models when researching Bernadette’s eclectic style, which includes trench coats, turtlenecks, Christmas sweaters and tops with geometric lines. She initially presented her ideas to director Richard Linklater and Blanchett, who wanted “the aesthetic of Margaret Howell. So I added some of those to the mix, too,” Perkins tells The Hollywood Reporter. “I wanted everything to have really clean lines, really simple shapes, things that could be just thrown on, but look really fabulous at the same time.” 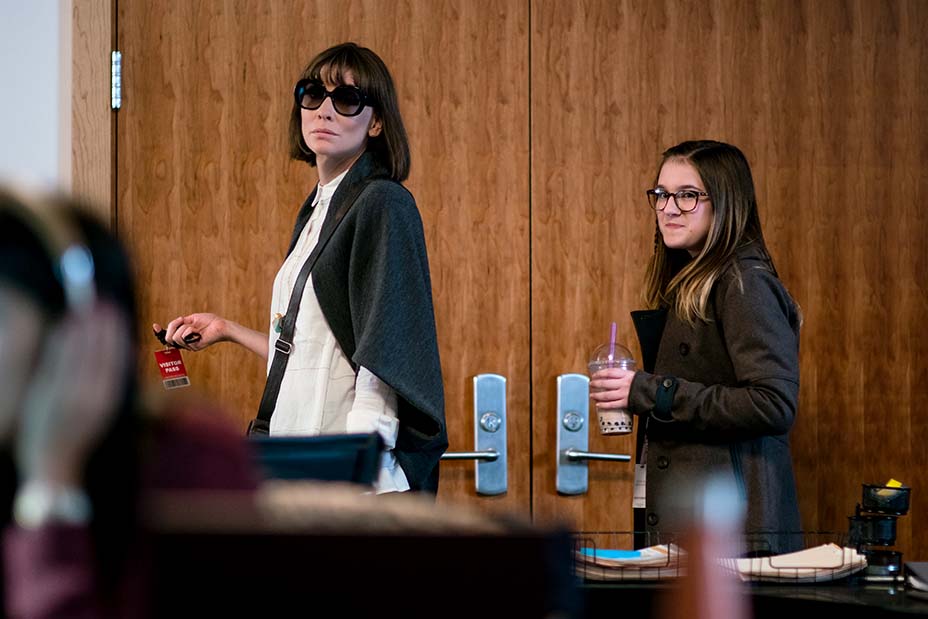 Perkins figured Bernadette probably had an online shopping addiction: “A lot of late-night looking at things, like, ‘Oh I love this and I love that.’ She was really so isolated in her world and that was one of the ways that she could really reach out and explore, through clothing.”

One of the key costumes is an olive-toned fishing vest that Bernadette decides she absolutely needs for their Antarctic adventure. She opens an Amazon box and tries on the vest, ultimately wearing it to a pharmacy and during a tense intervention scene, much to the surprise of her husband Elgie (Billy Crudup), who comments on the strange outfit choice.

“To her, she just thought, ‘Wow, this is such a brilliant idea. I can just carry all my stuff right here on my body. I don’t have to mess with a purse or anything.’ She was really trying it out and then got caught up by everything and kept wearing it out and not even remembering she had it on,” Perkins explains. 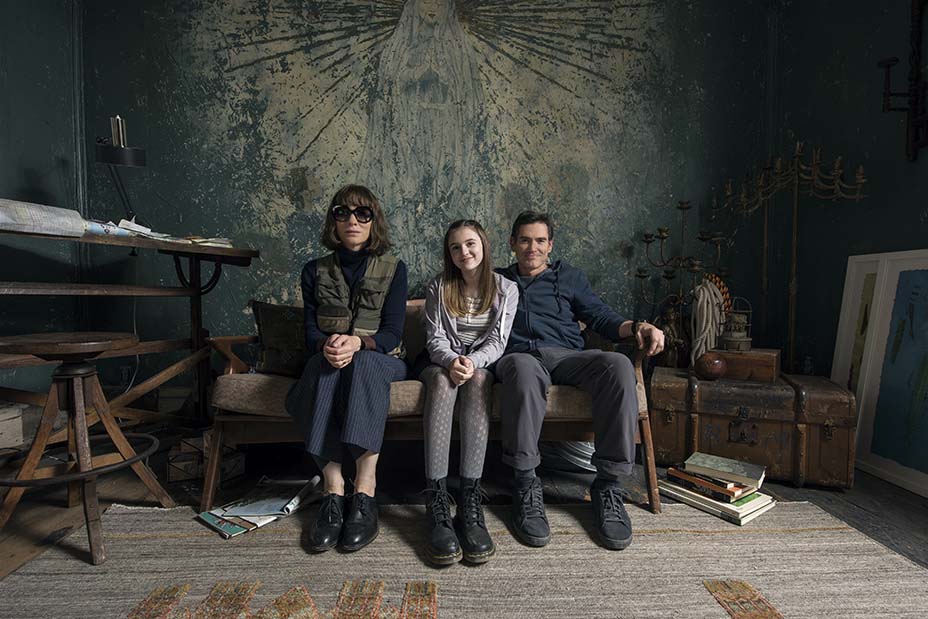 Bernadette, self-described as a “bitch goddess of architecture,” establishes a uniform with a rain jacket, scarf and wide sunglasses that convey her desire to avoid people and close herself off from the world. Perkins based the sunglasses on those worn by Semple, explaining that the author gave her original pair to Blanchett when she visited her in Seattle.

“Cate tried hers on and was like, ‘Nope, these are the ones,’” Perkins says. “They were Maria’s, so that was a nice thing to add, too, because she was very inspirational for the costuming. … Those were the glasses that she wore when she moved to Seattle and was really trying to protect herself. Those just became iconic.” Perkins had multiple sunglasses custom-made by Barton Perreira as replicas of Semple’s original ones with varying tints. 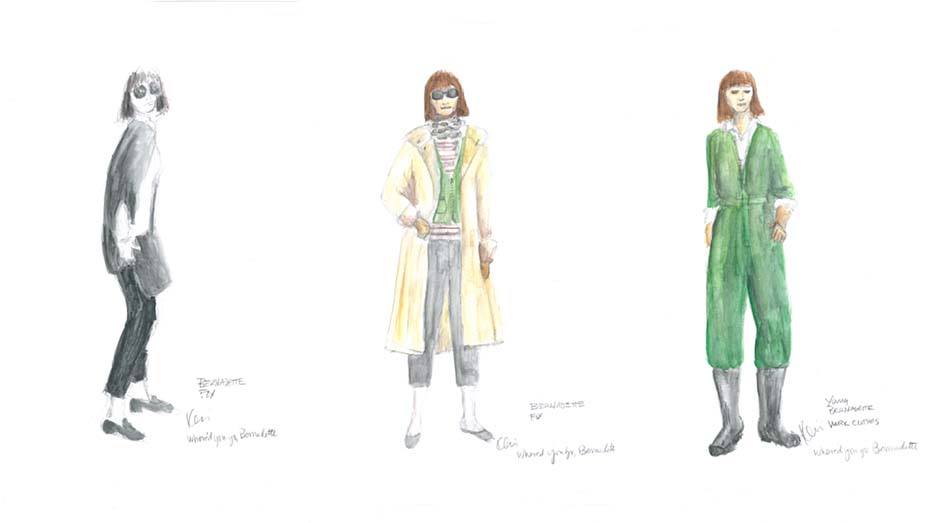 The shades were paired with Miyake rain jackets (it is the Pacific Northwest, after all), which were some of the first pieces Perkins found. Bernadette wears a black one when she has a confrontation with neighbor Audrey, and a tan Miyake  jacket when she’s at the library and pharmacy, where she falls asleep on a couch with her fishing vest on “looking like a mess.”

“I just love its elegant silhouette, really simple lines, beautiful fabric, the drape. That was one of the first things she tried and just loved it,” Perkins says of the jackets. “That became the iconic Bernadette look — I draped a scarf over her head and put those big glasses on and then boom, there she was.”

Perkins shopped for clothes in Pittsburgh, where the movie was filmed, and ordered items online. Other costumes include pieces by British designer Margaret Howell, a Marni sweater, Margiela culottes, Gucci loafers, coveralls and a blue shrug made by Perkins for a scene in a Mexican restaurant. Naturally, as the face of Giorgio Armani Beauty, Blanchett also donned an Armani blazer during an upscale family dinner at the spinning Space Needle restaurant. 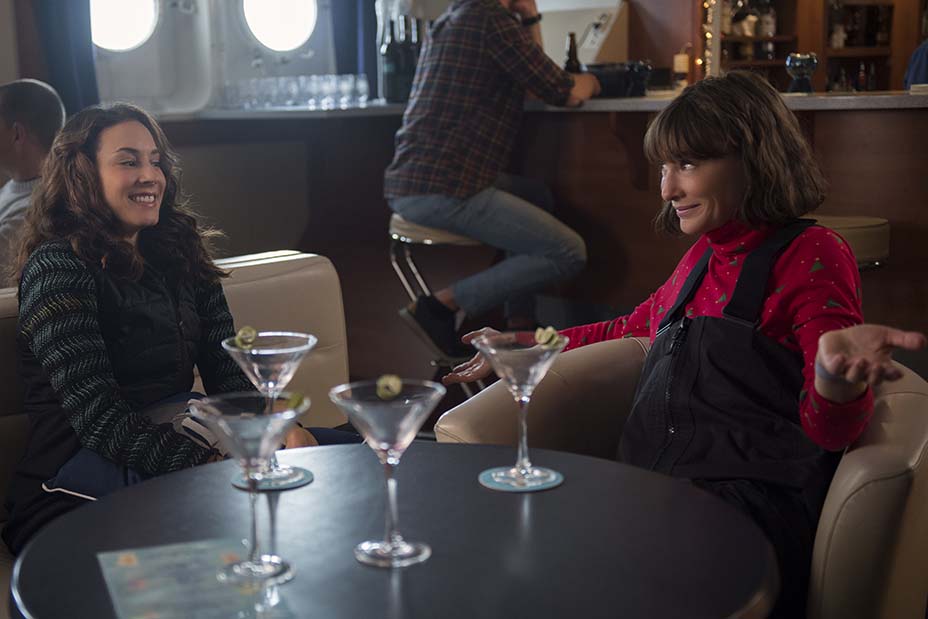 Then personal style goes out the window during their below-freezing cruise. Those bright red puffy suits? They’re the real thing. “Those were the actual garments that they wear when you go on cruises like that,” she says. The crew took a cruise to Greenland for filming, which provided waterproof pants, boots and jackets (worn with knit beanies). Perkins says they ended up buying some from the same company to use for stage work before getting on the boat.

Perkins further emphasized that Blanchett had a hand in envisioning the ensembles: “She knows how to wear her clothes. … We wanted to create this look that Bernadette is not bothered by trends. Just her own look, her own aesthetic. So Cate was really influential in helping to solidify that.” 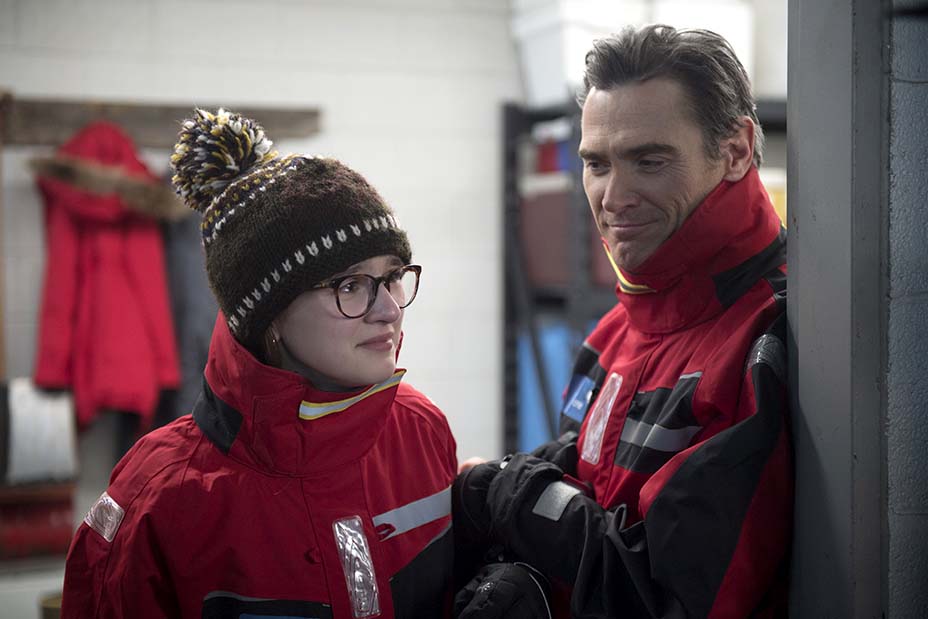