On Wednesday night, Dakota Johnson became the first Hollywood star to wear Hedi Slimane’s new Celine collection on the red carpet. The siren-red, draped sequin gown was look 40 in the spring 2019 runway collection that sparked a fiery debate inside the fashion industry when it was shown at Paris Fashion Week earlier this month.

Some fashion critics and devout customers of the old Celine, designed by fierce female designer Phoebe Philo, took issue with Slimane’s decision to gut her legacy from the LVMH-owned house completely. For his first collection, he excised the accent from the Celine name, and showed a lineup true to his own rock n’ roll aesthetic, although this dress is among the more ladylike styles that were on offer, with billowy sleeves and a draped waist. 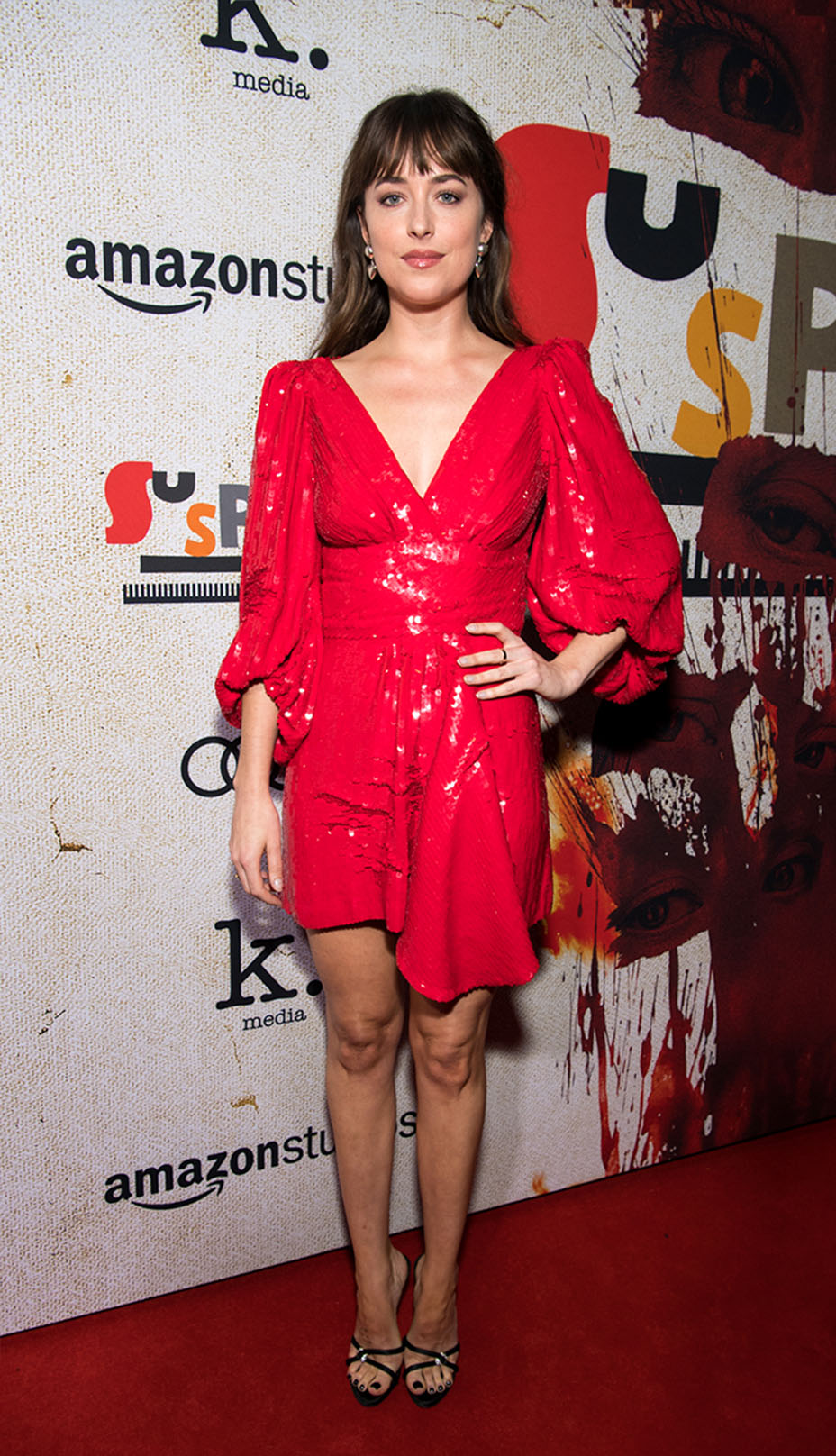 Fittingly, Johnson wore the devilish-red dress at the premiere for Suspiria, director Luca Guadagnino’s remake of the Dario Argento-helmed 1977 horror pic about a dance school run by witches. She stars along with Tilda Swinton, Mia Goth and Chloe Grace Moretz.

Say what you will about Slimane’s tactics, and whether his choice to erase a female design legacy was arrogant and unwise in the current political climate, but Johnson was the perfect choice to debut his vision on the red carpet. Like him, she’s a rebel force, one who took on the lead role in the steamy Fifty Shades film trilogy, even after high-profile actresses such as Emma Watson turned it down. “Who here actually thinks I would do 50 Shades of Grey as a movie? Like really. For real. In real life,” the Harry Potter star tweeted in 2013.

Is Hedi Slimane the Donald Trump of Fashion?

Hollywood legacy Johnson, daughter of Don Johnson and Melanie Griffith, didn’t mind baring almost all onscreen to play a submissive, and has reaped the rewards, appealing to both male and female fans (and Slimane is designing for both with his co-ed Celine runway), racking up a fragrance deal with Gucci and a lingerie campaign with Intimissimi.

She has 2.7 million Instagram followers, but doesn’t use social media (another rebel act), and is currently romantically linked to another A-lister, singer Chris Martin — and possibly pregnant! — all of which adds intrigue to her character, her red carpet appeal, and to Hedi’s Celine.

After paparazzi photographers caught snapshots of what appeared to be a gender reveal party at Johnson’s L.A. home earlier this month, rumors began swirling about a Johnson-Martin baby. She seemed to put them to rest on The Ellen Degeneres Show on Oct. 11, saying, “The only thing I’m pregnant with is a lot of really good ideas.”

That the Fifty Shades actress is embracing Celine is a bit of a surprise given how often she has been seen wearing Gucci, owned by LVMH rival Kering Group, on the red carpet. She wore a fairytale pink Gucci gown to the premiere of Bad Times at the El Royale in September, and Gucci at the 2018 Golden Globes. In recent weeks though, she’s worn several LVMH brands, including Givenchy.

In terms of design, the red dress is not so out of the ordinary, and the sequins seemed to be a bit mussed up when she wore it (perhaps that was intentional). But Johnson made it look good with long, bare legs and black simple sandals. “I knew the minute I saw the dress that it would be perfect for this premiere — it ticks all the boxes — everything I like in a red carpet dress!” said Johnson’s stylist Kate Young.

Is Johnson courting controversy by wearing Celine? Maybe, but only in the insular fashion world, where critics and customers took issue with Slimane’s decision to erase the image Philo set for the house in her 10 years there, when she put Joan Didion and other brainy women in ad campaigns, helped kick off the comfy shoe revolution by showing Vans-like slip-ons and furry Birkenstock-style sandals on the runway, and made no-nonsense handbags, jackets, knitwear and coats beloved by everyone from Veep’s Selina Meyer to Zoe Kravitz.

On Instagram, @phoebesceline, a nostalgic archive account dedicated to Philo’s work popped up the day after Slimane’s debut show at the house, covering the same ground as a fan account launched earlier this month called @oldceline. But as of today, the two accounts have less than 110,000 followers combined.

Stacy Jones, CEO of entertainment branding firm Hollywood Branded, calls the match “a brilliant move” for both Hedi Slimane’s Celine and Dakota Johnson, who “established herself as a risk taker after her starring role in the Fifty Shades franchise. The word of mouth alone on that career move catapulted her brand into one recognized as being more edgy and modern than many of her peers.”

Jones says that “while the fashion community may be in an uproar over the new direction Slimane has chosen to take for [Celine], Johnson’s fan base and paparazzi could care less. In this case, the controversy around her style choice elevated both the fashion brand and her own.”