Among Hollywood’s wealthy and famous, the question isn’t, “Who has lived in a Paul Williams house?” The question is, “Who hasn’t?”

One of the original architects to the stars, Williams during his 50-year-plus career created homes or did renovations for Barbara Stanwyck, Desi Arnaz and Lucille Ball, William “Bojangles” Robinson, Tyrone Power, Lon Chaney Sr., Bert Lahr and Frank Sinatra, among others. His homes, a mix of Tudor, Georgian, Spanish Colonial Revival and modernist, have passed through the hands of Marlon Brando, Betty Grable, Aaron and Candy Spelling, Jane Wyman and Ronald Reagan, Joseph Mankiewicz, Dino De Laurentiis, Don Johnson, Michelle Pfeiffer and David E. Kelley, Ellen Pompeo, Renee Zellweger, Joan Rivers (“Do you want to talk about his moldings? I could go on and on,” she once wrote), Denzel Washington, and Big Bang Theory co-creator Bill Prady. Today, Williams’ residences — known for their elegance, sense of tradition and livability — remain highly coveted, owned by Bob Iger and Willow Bay, Joseph Gordon-Levitt, Connie Britton and Joe Roth, among others. “While I appreciate the period details, historic materials and generous proportions, what is enduring for me is the timeless quality,” says producer and New York Giants co-owner Steve Tisch, whose Paul Williams house was built in 1932 and was previously owned by Michael Landon. “I have had the pleasure of living in my Paul Williams home for many years, and the house is intimate and relaxed: I can throw a party for 50 or a casual brunch for six, and everyone feels connected.”

For Lease: A Paul Williams-Designed Building on L.A.'s Sunset Strip 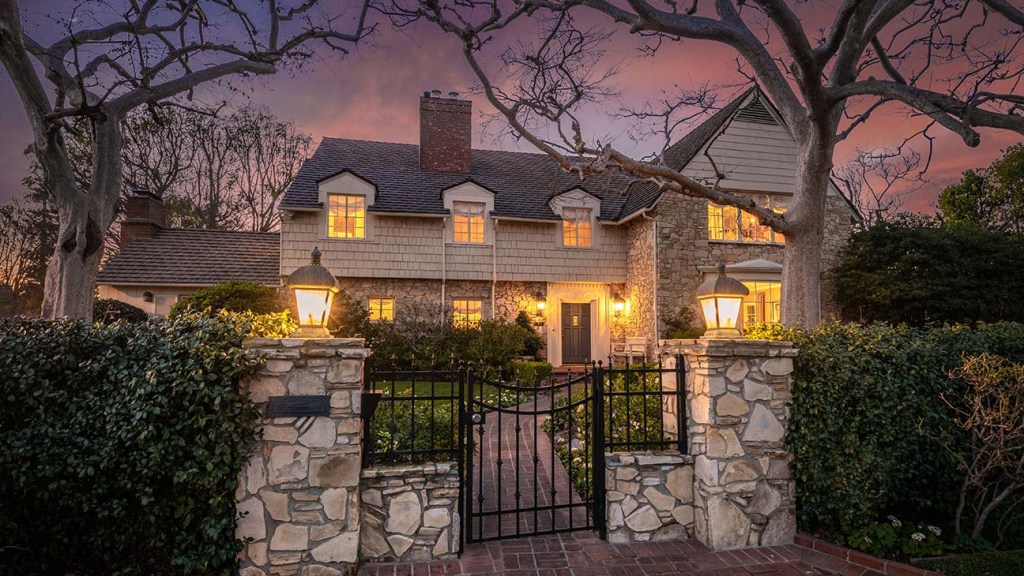 Williams — who died in 1980 at 85 (2019 marks the 125th anniversary of his birth) — contended with a challenge that contemporaries Wallace Neff and Reginald Johnson didn’t: racism. Orphaned at 4 (his parents, who had owned a grocery stand on Olvera Street in downtown L.A., died of tuberculosis) and raised by a foster family, Williams wanted to be an architect early on. But while he was attending Polytechnic High School, a school adviser asked him, “Whoever heard of a Negro being an architect?” and further discouraged the young man by adding that there weren’t enough wealthy members of his race to give him jobs. Williams would ultimately win commissions from many white clients, but as he recalled in a 1937 article, “I came to realize that I was being condemned not by a lack of ability, but by my color. Eventually … I found in my condition an incentive to personal accomplishment and inspiring challenge. Without having the wish to ‘show them,’ I developed a fierce desire to ‘show myself.’ ”

Such determination got him admitted to USC, where he studied architecture. His first commission to design a home — in Flintridge, from Louis Cass, a white high school classmate — allowed him to open his practice in 1922 at 28. A year later, he became the first black member of the American Institute of Architects. He would go on to build about 1,000 homes, with 400 situated along the leafy streets of such wealthy enclaves as Holmby Hills, Brentwood, Bel Air and Beverly Hills. 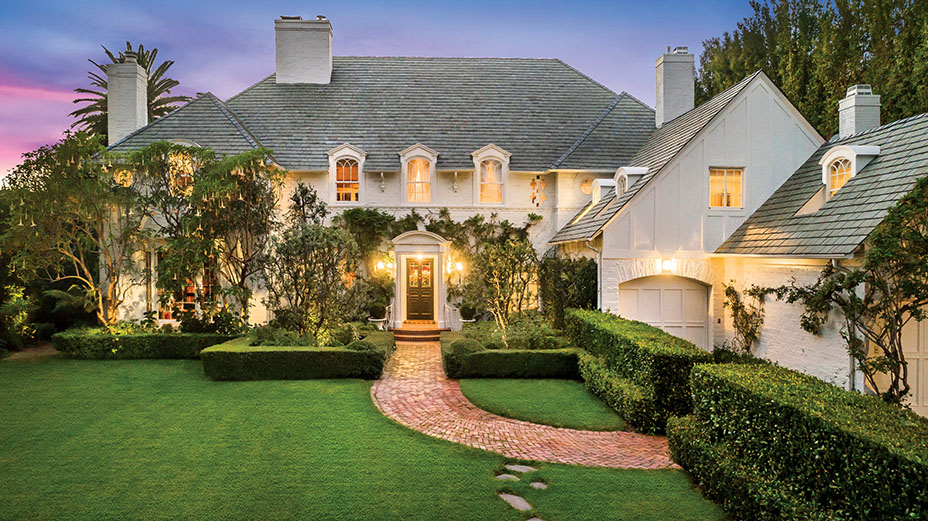 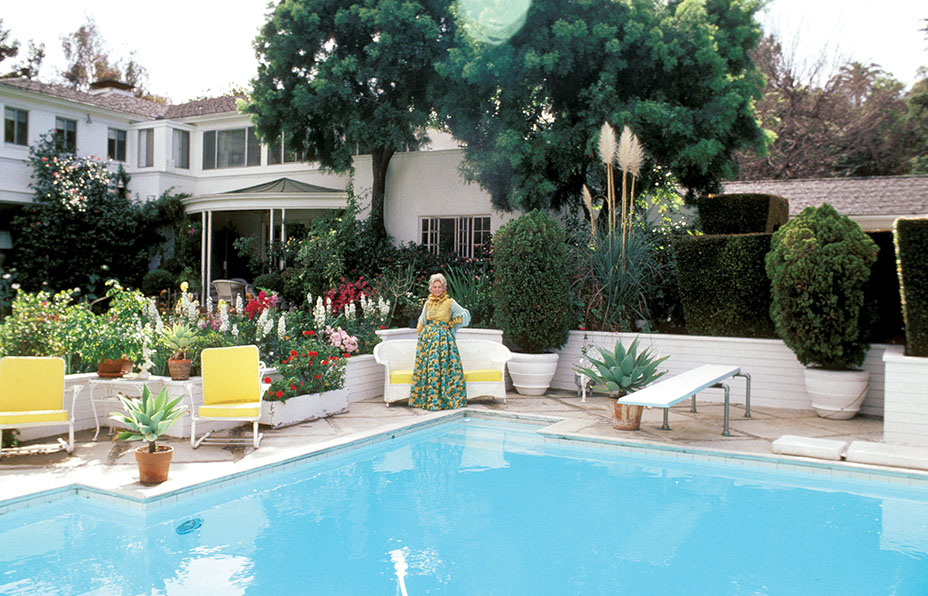 One key to his success was in making his clients as comfortable with him as possible. “He was a man who could not stand over his white clients while he talked to them,” Washington, who owned a Williams home in Toluca Lake, told the Los Angeles Times in 1990. (The house had previously been owned by actor William Holden, who is said to have thrown a wedding reception for Ronald and Nancy Reagan there.) So Williams taught himself how to sketch projects upside down so that he could sit across the table from the white men and women who hired him, rather than sit next to or hover over them. A colleague recalled how the architect kept his hands behind his back on job sites so that no white person would feel obligated to shake the hand of an African-American man.

Spurred by the reactions of clients who came to his offices not knowing that he was black — many would look at him and, as he later recalled, “freeze” — Williams became known for his exceptionally courtly manner. He’d also ask white clients how much they wanted to spend and reply that he never took jobs quite that small. “Nothing so impresses the average American as the illusion of financial success, especially if [it is from] an unexpected quarter,” Williams wrote. “The trick worked. Frequently it gave me needed clients.”

His remarkable attention to detail and sense of restraint amid grandeur enabled him to become one of the giants of 20th century architecture in California, according to George Smart, who has chronicled around 400 of his houses on the website US Modernist. “His homes are warm, comfortable and inviting,” says Smart. “His signature move was a circular winding stairway in the central hall. You would enter in the main door and would see this beautiful stairway that wound up to the second floor.” Other hallmarks include pocket doors and gracefully arched doorways. The aesthetic, especially early in his career, were homes that bespoke a sense of history and the feel of old money (“Conservative designs stay in style longer and are a better investment,” Williams once wrote), something that appealed to the film community, which was eager for respectability.

Adds Bay, dean of the USC Annenberg School for Communication and Journalism: “He designed homes, not houses. They were made for families.” In 2013, she and Iger were part of a group that led a fight to save a 1940 Williams house in their neighborhood from destruction; it now has local landmark status. Bay says that moving into her and her husband’s Williams house in Brentwood after relocating from New York “changed the way I felt about Los Angeles. To go into one of his houses is to feel grounded in the history and tradition of the city.”

Blair Rich, president of worldwide marketing at Warner Bros. Pictures Group, grew up in a Williams Tudor-style house on L.A.’s West Side. “He didn’t have any particular style. He had to be very accommodating to whoever the client was,” she says. In 2012, she and now-husband Zev Foreman, president of production at eOne, bought a Williams home of their own, a 1927 Spanish Colonial-style residence in Los Feliz, originally built for actor Lawrence Gray. “Paul Williams has forever been my favorite architect, but I never thought I would be lucky enough to find or be able to have one,” says Rich. “He has such an incredible sense of beauty and scale, and if you like to entertain, his homes are famously known for their incredible flow.” 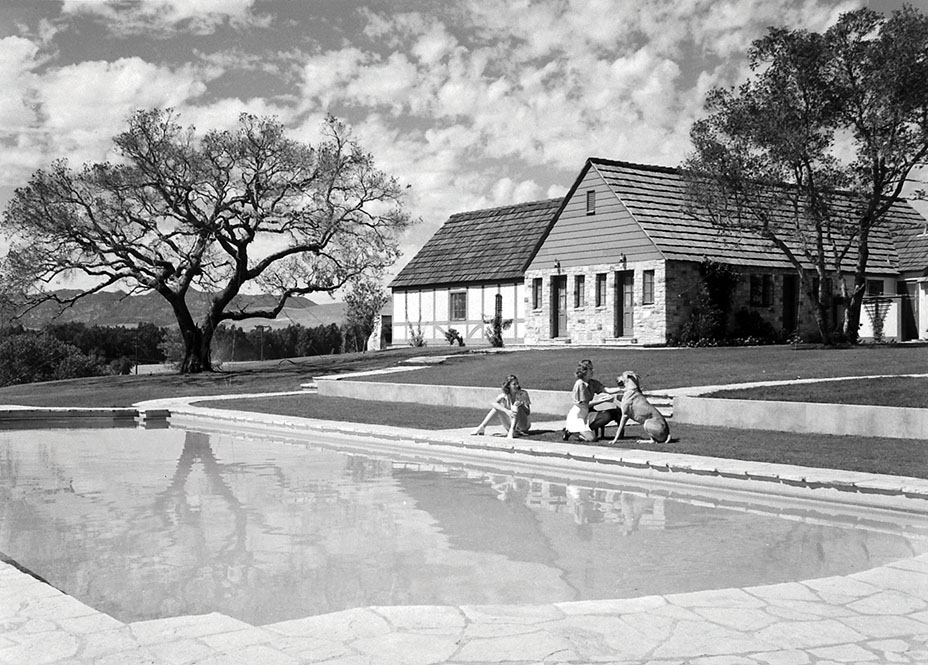 Some white clients undoubtedly hired Williams to show how progressive they were — but they wouldn’t necessarily have been happy having him as a neighbor. During the early years of his career, huge swaths of L.A. — in Bel Air, Beverly Hills, the San Fernando Valley — had racial covenants that prevented people of color from owning property. In 1927, the L.A. Real Estate Board boasted that “the only people of foreign races in Beverly Hills are servants.” As Williams later wrote, “Today I sketched the preliminary plans … in one of the most beautiful residential districts in the world. Sometimes I have dreamed of living there. I could afford such a home. But … I returned to my own small, inexpensive home in an unrestricted, comparatively undesirable section of Los Angeles, [South Central] … because … I am a Negro.” These covenants were ruled unenforceable by the U.S. Supreme Court in 1948, allowing Williams to buy one of the few remaining lots in Lafayette Square, an elegant semi-gated neighborhood near the intersection of Crenshaw and Venice Boulevards, and build a modernist home for himself, his wife, Della, and their daughters, Marilyn and Norma (who, as an adult, did interior design for her father’s firm). His granddaughter Karen Hudson told The New Yorker in 2005 that alarmed neighbors gave out leaflets alleging a black homeowner would depress property values. “This was a famous architect,” said Hudson. “It wasn’t like Jack the Ripper was moving in or something.”

Williams once recalled a white client who told him she felt sorry for him because “you know that you cannot be accepted socially by the whites, and I don’t see how you can find any real satisfaction in social contact with your own people.” Her sentiment couldn’t have been further from the truth. The architect was an active member and booster of L.A.’s black community, designing churches, the headquarters of a minority-owned life insurance company and public housing. As his reputation grew, he also took on such commercial projects as the Neo Georgian-style MCA corporate offices in Beverly Hills on Crescent Drive, now home to Platinum Equity; Saks Fifth Avenue on Wilshire Boulevard, (with architects John and Donald Parkinson); and the redesign of the Beverly Hills Hotel in the late 1940s, at a time when African Americans were not welcome to eat or stay there. Williams created its iconic logo, designed the Fountain Coffee Room and reimagined the Polo Lounge. 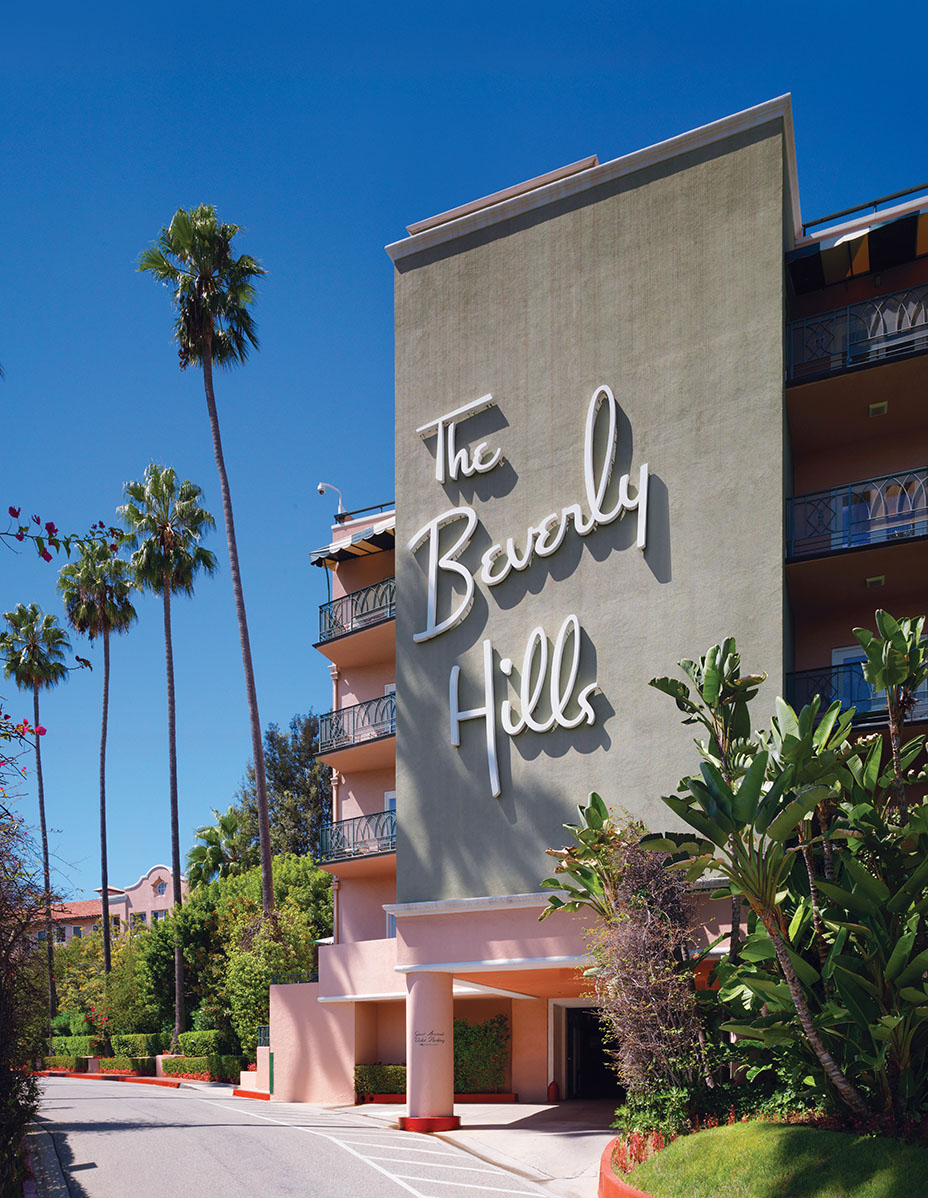 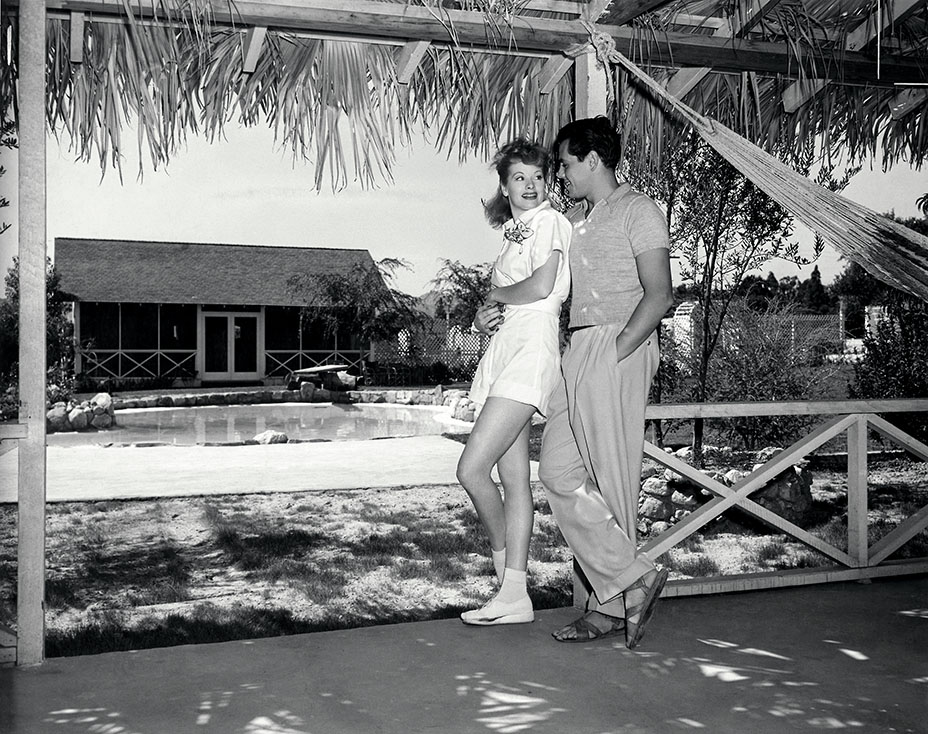 Thirty-seven years after his death, Williams was awarded the AIA’s Gold Medal, its top honor, in 2017. Black architects are still rare, making up just 1 percent of AIA’s L.A. chapter. And Los Angeles, 61 years after racial covenants were invalidated, is the 10th most segregated U.S. metro area, according to a 2018 study.

Sadly, not every Williams home is safe from bulldozers. Over the decades, at least 35 of his stately residences have been torn down, including Sinatra’s pad in Trousdale Estates (now a cookie-cutter Mediterranean), a modernist manse in the Hollywood Hills (razed by PayPal co-founder Peter Thiel) and a 1948 home in Pacific Palisades boasting a Lucite staircase (demolished by late King World co-owner Michael King).

Still, Williams was so prolific that hundreds of his residences survive. A number are currently on the market, where their architectural provenance can command a premium, including a 48-acre Mandeville Canyon estate listed at $28.5 million; a Georgian- style home in Brentwood once owned by actress Zasu Pitts, then Linda Ronstadt, for sale at $13 million; and a Hawaiian-inspired midcentury in Trousdale Estates restored by its owner, music producer Max Martin, listed at $11.5 million. Indeed, Williams’ work is so prized that some brokers even market homes not designed or built by him as being “Paul Williams-style” residences — a testament, says Bay, to “a career that’s an extra­ordinary triumph of talent and will.”