As Gucci, Tom Ford and Michael Kors ban fur in their fashion collections, and Bentley bends to the demands of its California customers by offering vegan leather interiors (made from mushrooms and jellyfish, no less), the desire for vegan decor is hitting home. “After coming to L.A. via New York City seven years ago, I noticed a significant shift in awareness and concern for animal rights and global health,” adds Studio Hus interior designer Tatum Kendrick, who recently completed a totally vegan L.A. residence for No Doubt bassist Tony Kanal and designed Moby’s Silver Lake vegan restaurant Little Pine.

For DiMare Design’s Deborah DiMare, whose book Vegan Interiors debuts Nov. 2, “When I discovered the term ‘dog leather,’ it was a pivotal moment. I refused to continue designing spaces with animal-based product.” DiMare, who founded vegan furniture line Arthur Avenue, says of her clients: “The majority seek an informal look, but informal doesn’t take away from opulence.” To be absolutely sure about a vegan piece’s provenance, Sarah Barnard’s studio fabricates most furniture, window treatments and artwork with trusted artisans.

For Kanal’s home, finding a great living room rug was a challenge for Kendrick. “As far as collectable vintage, the old worn Persian rugs,” which were harvested in ways considered cruel by modern vegan standards, “or midcentury leather pieces with great patina are definitely out of the equation,” says Kendrick, “but there is so much amazing design out there that it didn’t hinder our creativity at all.” Perennials Fabrics was Kendrick’s go-to for wovens, plush mohairs and boucle-type materials, and a safe synthetic cut-pile rug. Kanal’s sofa was custom-made to ensure it was 100 percent vegan, and they reupholstered vintage Kagan lounge chairs and a Desde armchair.

But as Kendrick, DiMare and their colleagues know, vegan design is not simply a matter of avoiding leather.

A true vegan home contains no animal products or materials tested on animals, including wool (exception for vegetarians: if animals are treated with kindness and fibers are processed organically) and silk (banana silk is an option). “A home’s design may include hundreds of different products, each with their own components and ingredients,” requiring close examination and research, says Barnard, whose Hollywood clientele request vegan homes more often than nonindustry folks because of a keen interest in animal welfare. Barnard trusts O Ecotextiles, at George Smith showroom, and Dunn-Edwards paints. 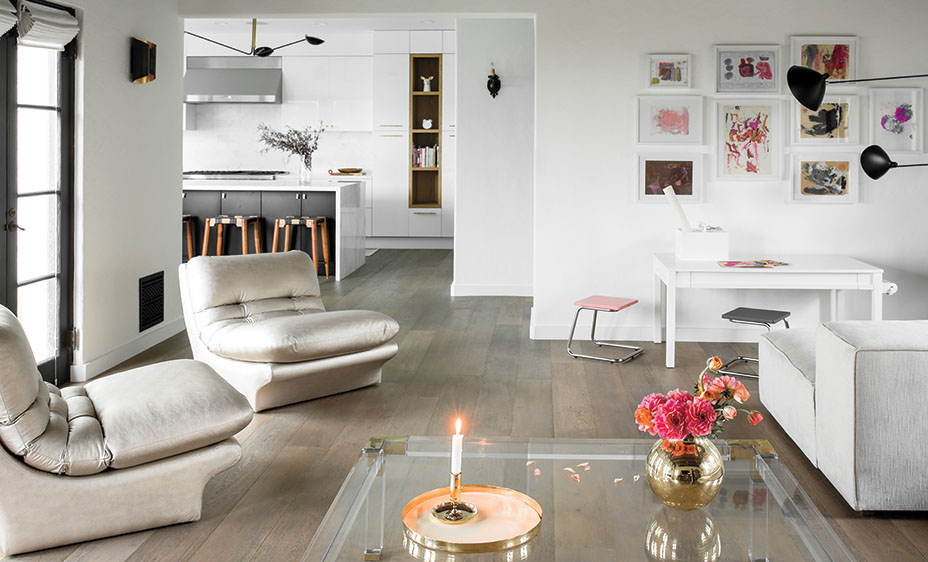 “There are exciting developments in the use of natural bacterias and fungus to produce faux leathers,” says Kendrick, who’s currently developing a line to launch in 2019. Biofabrication, using vegetation, is being touted as the future; Pinatex is a “leather” made from pineapple leaves. “The race is on and it’s fascinating,” says DiMare.

The vegan leather industry generated $17.5 billion in 2015 and is expected to hit $85 billion in 2025; DiMare says every client to whom she’s shown buttery faux leather samples has flipped. Joaquin Phoenix and Leonardo DiCaprio have long been vocal about ending animal cruelty, says DiMare. (Phoenix wore faux leather in his Oscar-nominated performance as Johnny Cash in Walk the Line and also appeared in a PETA exposé about dog leather.) But further enlightenment is needed, says the designer: Stars like design pro Ellen DeGeneres may be passionate animal advocates, but “she has yet to make the connection that the leather in her home is filled with tragedy.”

An Inside Look at L.A. Dodger Chase Utley's Post-Career Retreat