Winnie Madikizela-Mandela, the activist and former wife of the late Nelson Mandela, died Monday following an illness at the age of 81.

She will be first and foremost remembered for fighting apartheid in South Africa, struggling for the country’s liberation alongside her husband. Perhaps unintentionally, however, Madikizela-Mandela has also come to be looked upon as something of a style icon, her vivid wardrobe becoming linked to her message of empowerment and perseverance.

“Madikizela-Mandela’s varied costumes recall key moments in her own personal story, a unique one that spans from freedom fighter to first lady. And they reflect the momentous changes South Africa has experienced in her lifetime,” the BBC reported in 2014, mentioning how she used combat fatigues, Che Guevera-style berets, matronly suits and even ferocious animal prints, depending on what was called for in a particular political moment.

In recent years, following her 1996 divorce from Mandela, she was often photographed in colorful, statement-making fashions, including turbans and pan-African prints. Madikizela-Mandela had a flair so iconic that Ruth Carter, costume designer on the recent box-office smash Black Panther, name-dropped her as an inspiration for the film’s costumes. Earlier this year, Carter told The Hollywood Reporter that she looked to the late activist specifically when creating ensembles for Angela Bassett’s character Ramonda in the film. “I had video of [Madikizela-Mandela] arriving at a birthday party in South Africa wearing a traditional Zulu woman’s ceremonial costume and headdress that was just beautiful,” the designer said. 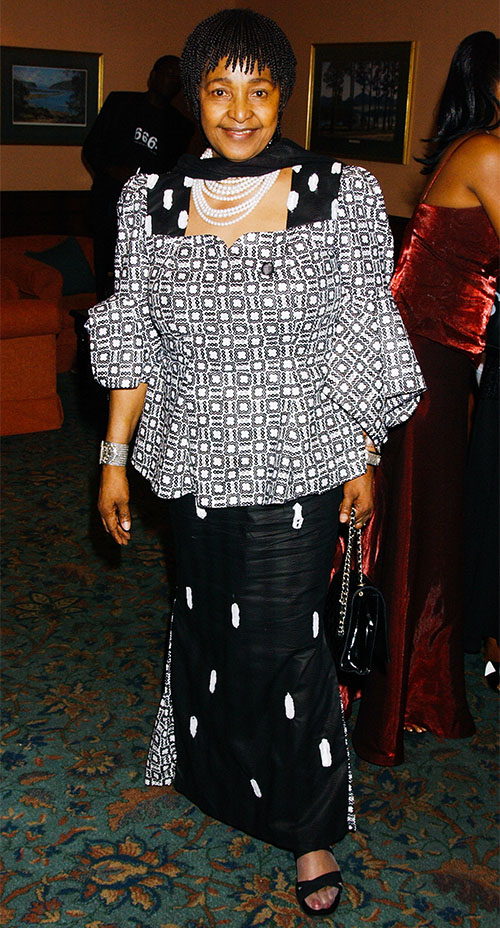 Diana Cilliers, who created costumes for Justin Chadwick’s Mandela: Long Walk to Freedom, also remembered the regal style sensibilities of both Madikizela-Mandela and her husband. “They had a rich way of looking at clothes,” she told the New York Times in 2013, when the film was released. “Both Winnie and Nelson Mandela were very well-dressed people.”

Cilliers referred to Madikizela-Mandela, who was played by Naomie Harris in the movie, as “incredibly stylish,” adding that “everything was always beautifully matched.” Cilliers also acknowledged the power of Madikizela-Mandela’s accessories, specifically the beaded Xhosa necklace she wore in court during a time when traditional South African clothing was banned.

Supermodel Naomi Campbell, herself an outspoken activist, remembered Madikizela-Mandela on Monday afternoon as an inspiration and a friend. “I cherish the times I spent with you,” she wrote on Twitter “You were a woman of strength that endured so much hardship and sacrifice.”

I cherish the times I spent with you, embracing me in your family & home. You were Woman of strength that endured so much hardship and sacrifice. Without you we would not know anything about Tata and his 27 years. You will remain in my heart!! R.I.P WINNIE MANDELA pic.twitter.com/2R9fg1t6dx