The rapper actually sparked up on the runway while showing a capsule collection as part of the MADE LA fashion and entertainment event Saturday at L.A. Live.

A WME/IMG venture, the runway shows, performances and DJ sets — which were open to the ticket-buying public — were full of talent repped by the agency, including Khalifa and Snoop Dogg, whose son Cordell Broadus showed a collection with Joyrich earlier in the day. Opening Ceremony kicked off the event on Friday night with a “Modern Western,” featuring stunts choreographed by Zoe Bell. 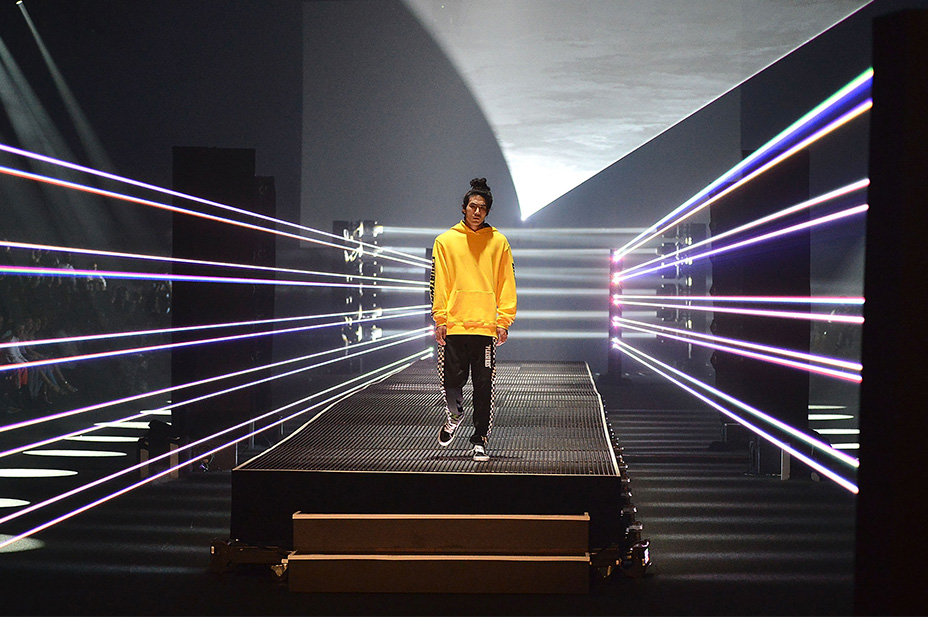 For his collection, Khalifa collaborated with L.A. streetwear brands FourTwoFour and Pleasures (the outfit that controversially put Kurt Cobain’s suicide note on a T-shirt). 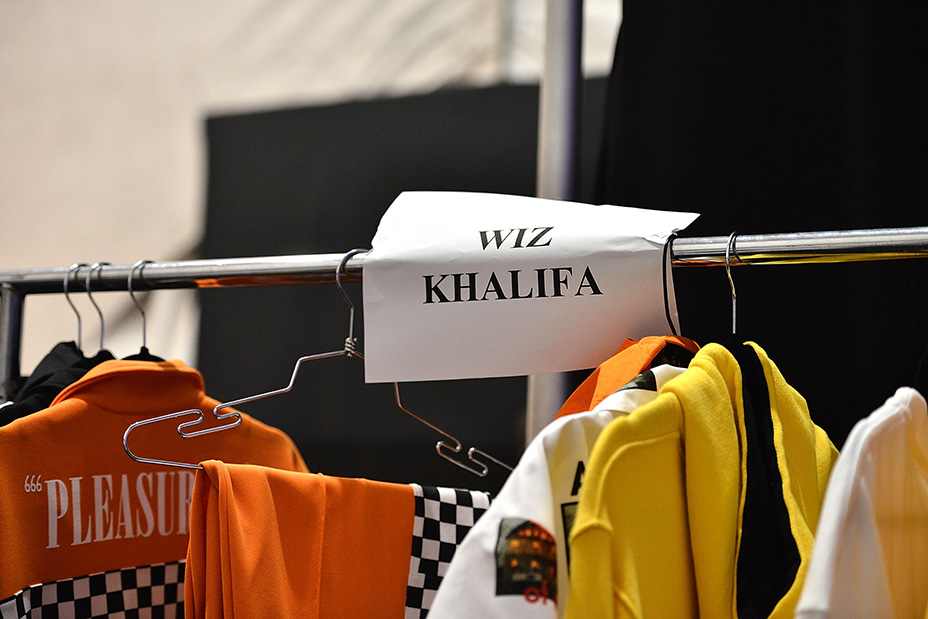 “We’re all friends, we are all cool with the same people, we all make music and smoke, and skate and chill together, or our friends do, so it just made sense, we’re all in the same crowd,” said Khalifa, who is no stranger to the fashion space, having collaborated with Junk Food on a collection inspired by Sebastian Taylor Thomaz, his 3-year-old son with Amber Rose, and having recently appeared in a Gap ad.

“Our generation is a mixture of technology, music, art and fashion, everything is all blended together, so when it comes to premiering a line, we want to bring everything together,” he said of the show’s format.

On the runway, the result didn’t amount to much more than some cool-looking black-and-yellow fleece hoodies and pants dressed up with an elaborate, 45-minute laser light show. (Yes, some ticketed guests did walk out.) 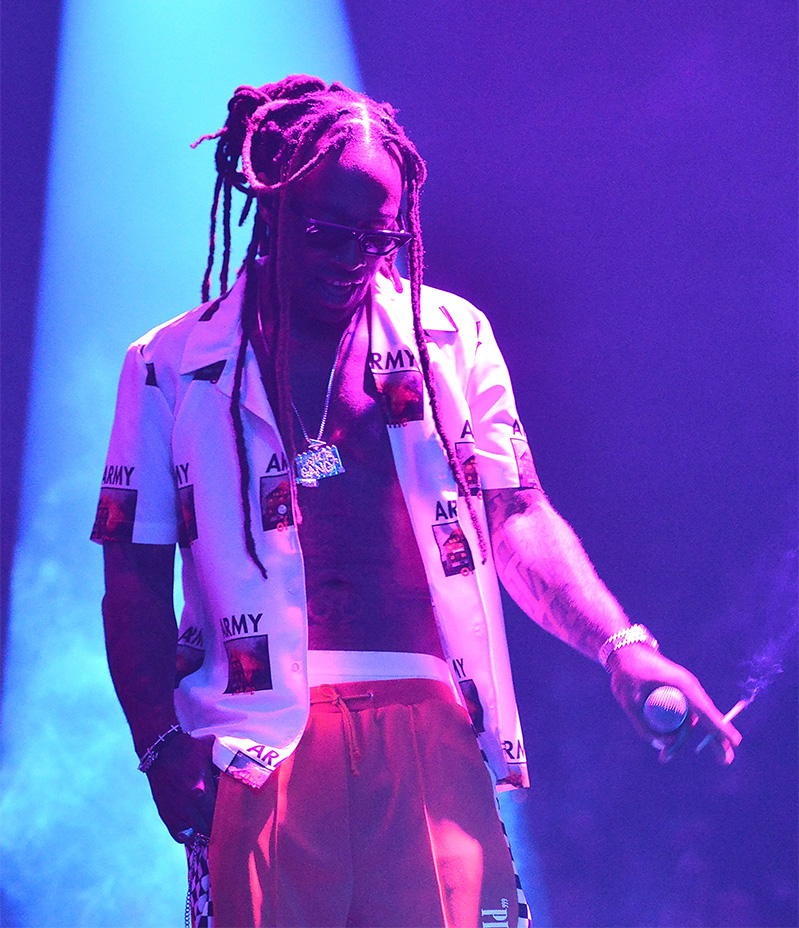 But those who stayed were treated to a smoke-filled finale performance by Khalifa of (what else?) “Black and Yellow,” from his 2010 album Rolling Papers. He was joined onstage (or on runway, rather) by Ty Dolla Sign and Juicy J. 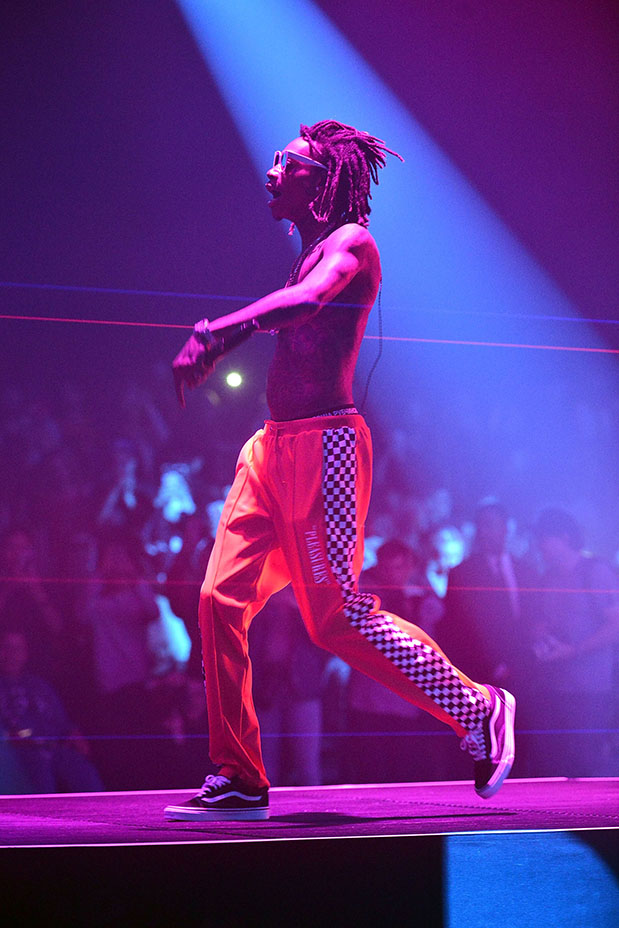 The audience was thrilled, including front-row guests Miss USA (Kara McCullough) and Miss Universe (Iris Mittenaere), who bopped along to the music and snapped photos of Khalifa, who was by then shirtless. McCullough said, “OK, I’m in full teenage girl mode right now.”

#Stop right now, thank you very much. • @made LA with @missuniverse. pic.twitter.com/bMVWuXyHvX