Sniping could be heard when it was announced that Kim Kardashian West would receive the first-ever Influencer Award from the Council of Fashion Designers of American at its annual ceremony, but negativity was nowhere to be found at the Brooklyn Museum on Monday night. From every corner of the industry, there was only respect for Kardashian West, her 112 million Instagram followers and how she’s impacted both fashion and social media.

The decision to create the award was made at the CFDA’s annual board meeting in March. “How can you ignore this world, right?” said CFDA chairman Diane von Furstenberg. “I’m happy to do it. She’s a good girl.”

Kardashian West – who wore an ivory knit crop top and full-length skirt by Rick Owens to the event, a look that was “simple and casual, but fancy enough for an awards show,” she said – wasn’t the only person under consideration as the award’s first recipient, noted Steven Kolb, the CFDA’s president and CEO. “I’m sure there were some people who didn’t like the idea, but she’s been nothing but a sweetheart,” he said Monday night. “She’s really trailblazed the idea of being an influencer. And for us, too – we like to think everybody cares about the CFDA and American fashion, but it’s probably not as big a group as we may think, so when someone like Kim with a reach of 112 million people comes to the CFDA Awards, then that’s good for everybody. It’s not why she got the award, but it is the icing on the cake.”

Modeling mogul Bethann Hardison agreed, adding that people who take the idea of fashion too seriously might want to view the industry through a wider lens. “Look, I grew up in the garment industry. I’m a real apparel girl, that’s my world,” she said. “Then they started calling it ‘fashion’ — if you sewed a button on a shirt, that was ‘fashion.’ But we’re no longer this little private island; now it’s understandable that anything goes. I like the family, Kris [Jenner] and all of them. The girls have been raised very well, and they’ve built something very organically, so good on them.”

Several models said they were inspired by Kardashian West’s influence, including Josephine Skriver, whose Instagram following is approaching five million. “I’ve learned a lot just by watching what she’s doing, what she’s willing to share and not share,” she said. Sara Sampaio, who accompanied Gilles Mendel and wore a blush-hued gown that debuted earlier Monday morning at his Resort 2019 J. Mendel show, agreed: “From her hair to her makeup to her clothes to her ideals, no matter what she says or does, people are listening.” Mendel, meanwhile, called Kardashian West “ahead of her time. You want to be associated with Kim Kardashian and others, because they are the ones leading the world.” 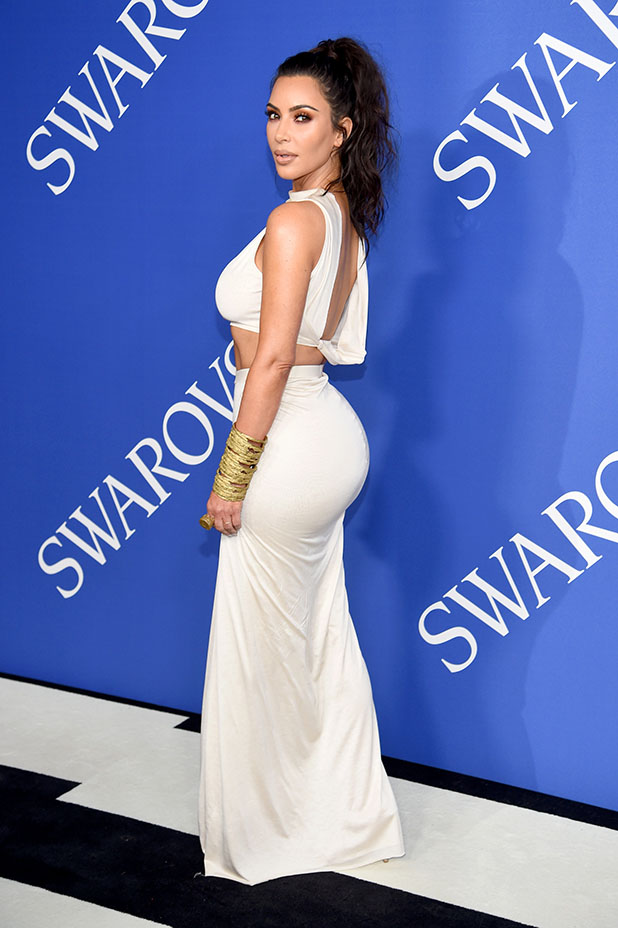 Neiman Marcus fashion director Ken Downing got to know Kardashian West when they worked together on The Fashion Fund, Amazon Prime’s docuseries about the CFDA/Vogue Fashion Fund. “I think there’s nobody more deserving,” he said. “She certainly has turned the world upside-down in many different ways. And the other thing is, she’s just a super sweet girl. Sometimes girls in fashion get a really bad rap, because people don’t realize that they’re as kind and sweet and generous as they are successful. But with Kim, there’s a genuine, caring soul behind those beautiful eyes.”

The role of social-media influencers in fashion is a seemingly endless conversation: What’s the value of influence, how does that translate to sales, and quantity vs. quality of followers are the questions constantly being raised in the industry. From the beginning, some designers were more enthusiastic than others. “We were one of the first brands that embraced influencers,” said Rebecca Minkoff. “There used to be interventions not to talk to influencers, that they were beneath us. But it was part of how we grew as a brand, so for us it’s very organic and natural. We’re happy to celebrate the fact that influencers are now a normal part of the industry.”

During her acceptance speech, Kardashian West joked that she was shocked to win a fashion award “when I’m naked most of the time,” but backstage after receiving her trophy, she offered additional thoughts on how the industry has grown to accept her. “I’m grateful that designers took the time to change the way they make clothes,” she said. “It’s friends like Olivier Rousteing from Balmain and the idea that I couldn’t fit into samples. He made clothes to fit my curves, and others followed. That’s really amazing to me.”

With 112 million followers, many influencers might seem content to rest on their laurels, posting solely about products and ideas that directly benefit their brand, but Kardashian West says she’s just getting started. “Being an influencer goes so much more beyond fashion and beauty,” she said Monday night. “So many people have the opportunity to make change and help people’s lives in many ways. For me it happened to be social media. I hope that becomes the new form of influencer: to help others out and make a positive change in someone else’s life.”