When Donald Glover’s stunning starter home in the sleepy Los Angeles suburb of La Cañada Flintridge first hit the market in February, the listing attracted substantial publicity from Dirt and other outlets. One of the deep-pocketed folks who caught wind of the sale was Mark Fischbach, the 31-year-old gaming YouTuber better known as Markiplier. Fischbach quickly won the keys to the place, paying exactly $4 million — $15,000 over the asking price — for the estate.

Of course, it’s no surprise that Fischbach can afford to afford to pay millions for a home; he’s one of the most successful YouTubers of all time, with upwards of 15 billion lifetime video views, 29 million subscribers, and a widely reported $35 million net worth. It’s a big come up for the Hawaii-born University of Cincinnati dropout, the son of an American Army veteran and a Korean mother, who grew up poor in the Cincinnati suburbs.

Fischbach and his longtime partner, Amy Nelson, will be decamping to La Cañada from the Echo Park neighborhood, where back in 2016 he paid just over $1.6 million for a newly built contemporary house with three bedrooms and four baths in about 3,000 square feet of hard-edged living space, all of it set behind camera-watched gates.

As for the new property, the ex-Glover estate lies on a twisty mountain road, with the house well hidden from the road behind gates and a long driveway. Built circa 1953 by obscure Pasadena architect Keith P. Marston and renovated during Glover’s ownership by top L.A. designer Barbara Bestor — who’s also responsible for the dynamic recent remodel of John Lautner’s iconic “Silvertop” mansion — the low-slung house structure offers about 3,300 square feet of living space and last sold in 2016 for about $2.7 million. 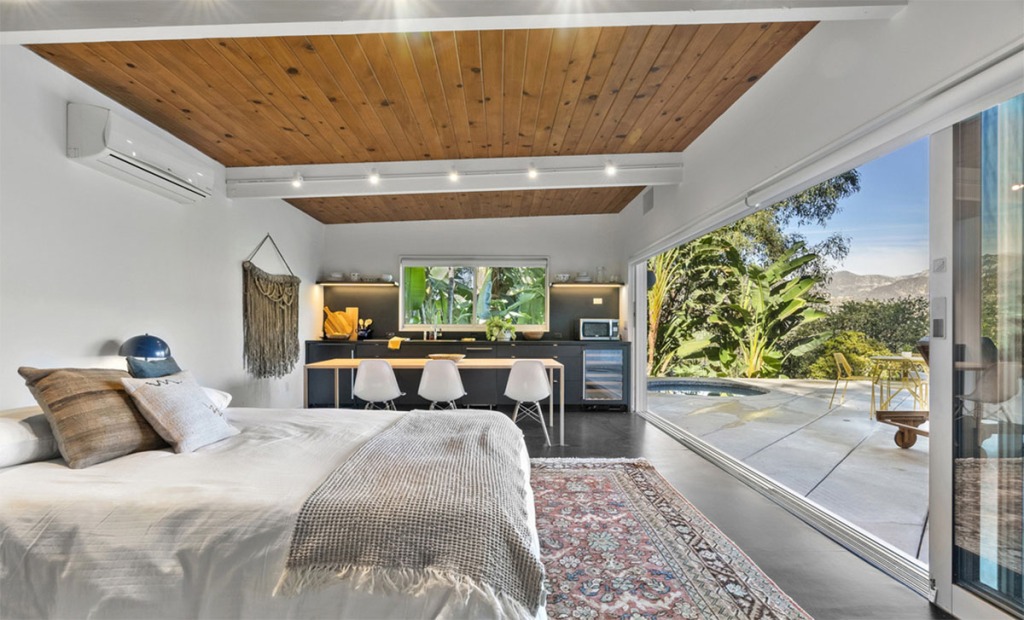 The home’s exterior is spiced up with a cobalt front door; inside, there’s a modernized kitchen that retains its midcentury hallmarks, complete with banquette seating and exotic-looking cabinetry. Natural light filters into the kitchen via a floor-to-ceiling glass slider that opens to the blacktopped driveway, which is shaded by a mature oak grove.

Beyond the kitchen, a white brick fireplace effectively bisects the dining and family rooms, both of which offer two sets glass sliders opening on one side of the room to a grassy knoll with panoramic Angeles National Forest views, on the other to a firepit-equipped stone terrace for romantic al fresco dining. Other entryway-adjacent spaces include a forest green powder room and a spare bedroom that currently functions as a cozy living room.

At the far rear of the single-story house is a family wing that’s well removed from the public rooms. Behind closed doors are a tiny laundry room, plus a bedroom and office that share a full bathroom. But the master retreat is indisputably the show’s star, with a bedroom opening to a private wooden deck and a redwood bathroom with dual vanities and a skylit glass shower that’s completely open to the back patio, potentially creating vivid memories for an unsuspecting gardener.

The 1 acre property also offers a private pool area that’s set well away from the house, just off the driveway. The oversized swimmer’s pool boasts beautiful views, plus leafy surrounding gardens and a poolside cabana with a full bathroom.

Glover and his longtime partner, Michelle White, continue to reside in La Cañada; the couple own a larger nearby home acquired several years ago and recently renovated. Andrew Morrison of Redwood Real Estate Brokerage held the listing; Michelle Schwartz of The Agency repped Markiplier.