In a new production, a high-powered magazine editor is consumed by daydreams and nightmares: Lady in the Dark could be considered The Devil Wears Prada meets Black Swan, featuring costumes that likewise are required to balance ideas of high fashion and high drama.

So when MasterVoices artistic director Ted Sperling decided to produce an updated staging of Lady in the Dark at New York City Center, he and costume designer Tracy Christensen sought out the assistance of a modern-day fashion bible. “Because the lead character is the Anna Wintour of her time, asking advice from the team at Vogue seemed like a good idea, especially since we were working on a shoestring budget,” Sperling tells The Hollywood Reporter of the production, which opened Thursday evening and runs for just three performances through Saturday afternoon.

Lady in the Dark isn’t a musical that immediately leaps to mind for even the most ardent Broadway fans. This story of Liza, the editor of fictional Allure magazine, unfolds in a decidedly surreal fashion — with book by Moss Hart, music by Kurt Weill and lyrics by Ira Gershwin — and originally opened on Broadway in 1941 with Gertrude Lawrence as the titular lady. Three years later, Paramount produced the film version, starring Ginger Rogers.

Given the fashion-magazine setting, costumes for both productions needed to rise to the level of the women playing Liza. Norman Norell (who crafted costumes for film and theater before he was hired by Hattie Carnegie to design for couture clients in her New York atelier) was enlisted to create costumes for Lawrence, while Edith Head split the duties with Tony Award-winning set and costume designer Raoul Pene du Bois to create Rogers’ costumes, which famously included a red beaded gown with a mink overskirt. Produced at a cost of $35,000, a princely sum in 1944, that dress currently resides in the permanent collection of London’s Victoria and Albert Museum.

Fast-forward to 2019, and enter Hamish Bowles, Vogue’s International editor-at-large, who was happy to fulfill the dual role of adviser and intermediary between the MasterVoices team and fashion houses. “The appeal for me was an overwhelming desire to see this production staged,” Bowles says. “I have adored the music for so long — particularly the soundtrack from the original 1941 Broadway production — but it is a notoriously challenging piece to stage, so it has only been revived very infrequently.” 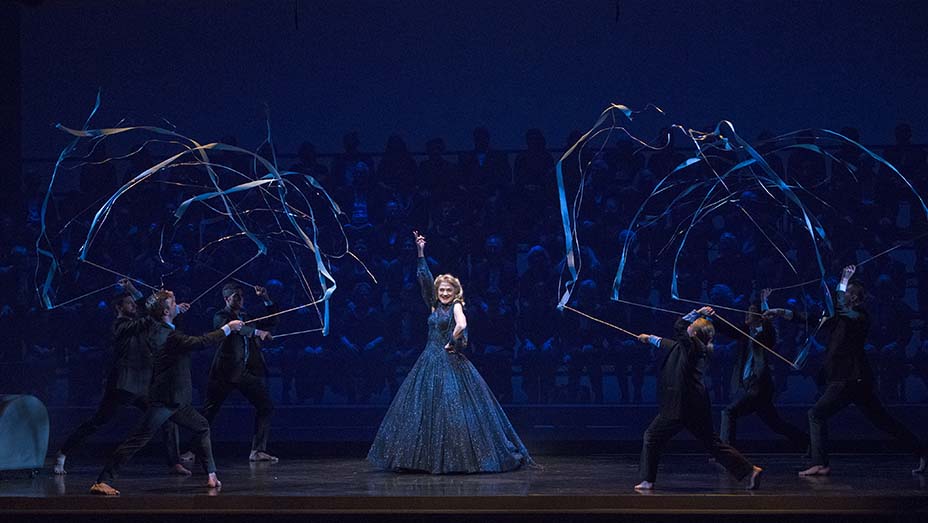 Lady in the Dark features three distinct dream sequences — titled Glamour, Wedding and Circus — so Bowles worked with Christensen on approaching different fashion labels to result in a trio of distinct looks. Marchesa provided the wedding gown, while a group of looks from Thom Browne’s spring collections were deemed perfect for the Circus sequence. Zac Posen, meanwhile, eagerly signed on to create the look for the Glamour sequence. “There was a great freedom for us in working with these designers,” Christensen says, noting that the pieces from Marchesa and Thom Browne came from existing collections, while Posen adjusted an existing design and enhanced it with custom pieces. “Zac has got such an amazing theatrical attitude, and he really embraced the idea of the gown for the Glamour sequence. At one point Ted asked if we could accessorize the gown with an additional piece; Zac immediately sketched something on a napkin, and it was perfect.” 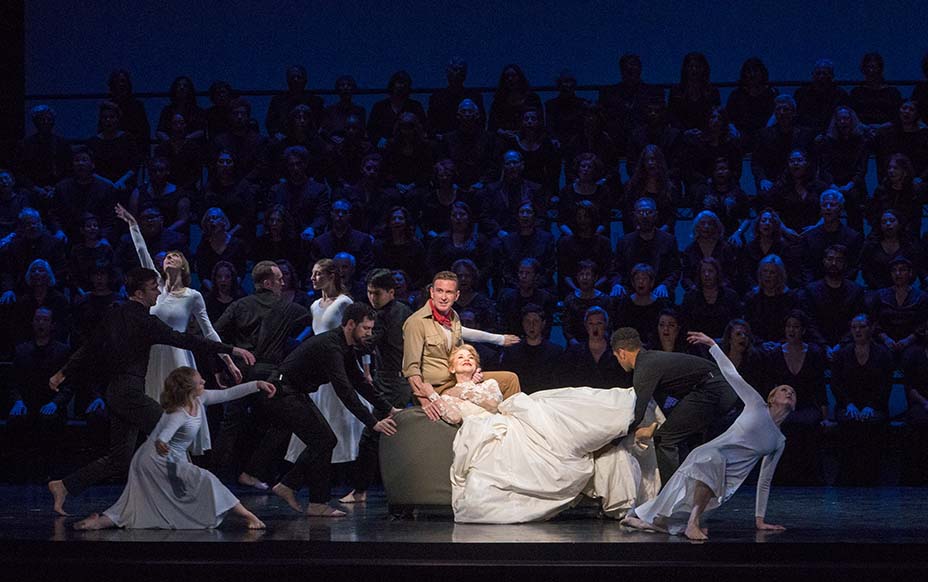 Indeed, anyone who knows Posen’s passion for Broadway wouldn’t be surprised. “I’m a very big musical-theater fan, born and raised; Lady in the Dark is also a lesser-known musical, and my ears really perked up at that,” he says. “Glamour, illusion, a dream and Hollywood are some of my favorite things. So for this sequence that was all about blue tones, I thought of this gown that I had just created for my fall collection, in midnight blue with flocked tulle, a full skirt and a side drape. It also had a real 1940s, Hollywood Regency feel about it that I thought would work for this.” 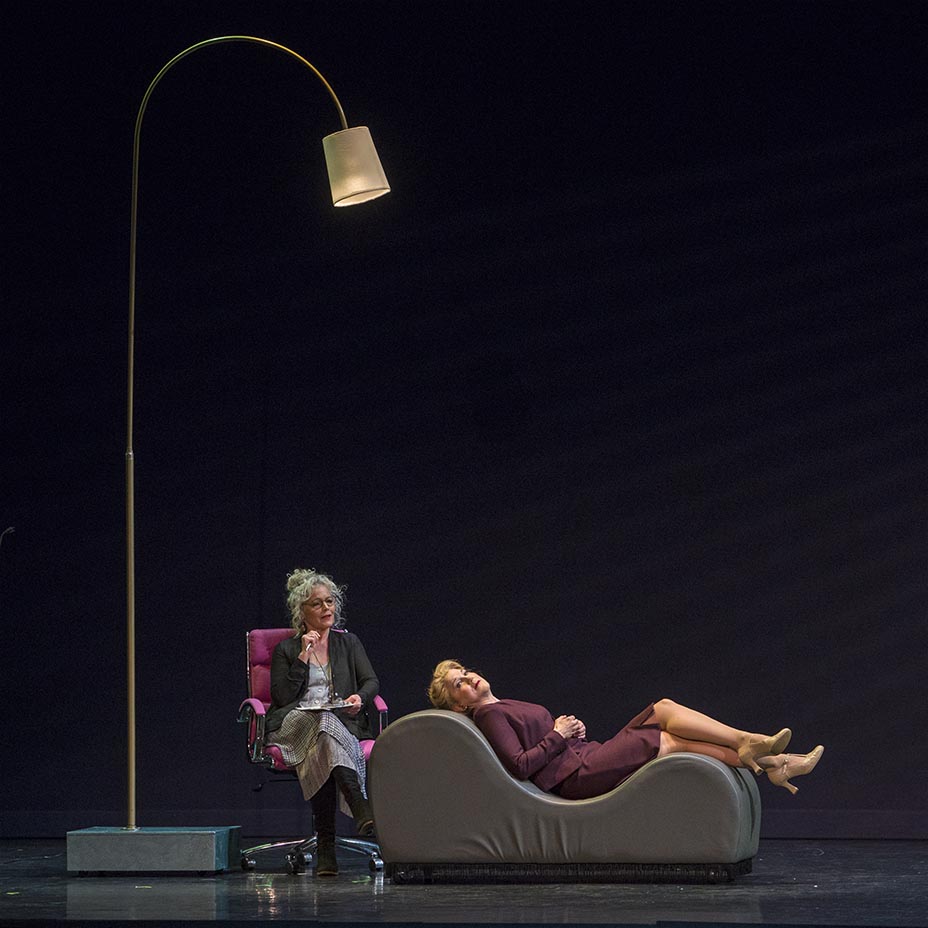 The MasterVoices production of Lady in the Dark stars Victoria Clark — a Tony Award winner for 2005’s The Light in the Piazza — as Liza, while the cast also features Amy Irving and Ben Davis, whose work includes Baz Luhrmann’s 2002 Broadway production of La Bohème. Posen knew his midnight-blue gown also had to work for Clark, in a variety of ways. “That’s my job,” he says, pointing to adjustments on the gown that included accommodating Clark’s diaphragm for signing, or subtle elastic under the sleeve so she could raise her arm. “I have such a huge respect for the fitting process, especially for performers and what they wear. So we had to take a fashion sample and turn it into a stage sample.” 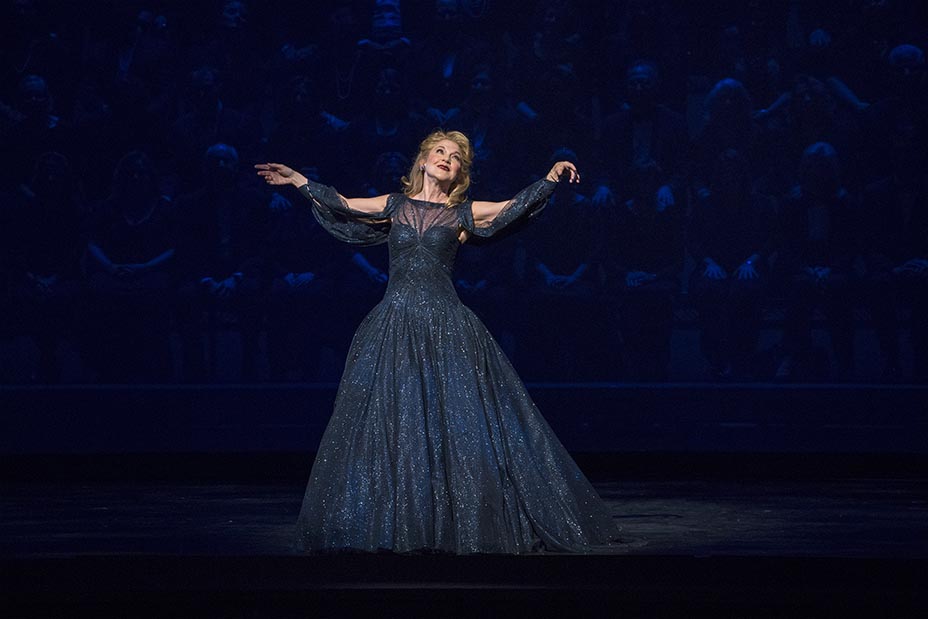 Quick changes were especially key. “I was so specific about those needs,” Christensen says. “We added a zipper that was long and zipped really low so Vicky could step in and out of the gown easily, and there were other details like rigging a closure on the sleeve. These pieces were designed for a beautiful woman to wear walking across a room, not to dance around or be twirled on a chaise lounge. All those things had to be figured out.”

Christensen likewise fell in love with Browne’s pieces for the Circus sequence. “They were super oversized and colorful and crazily theatrical,” Christensen says. “His team also has been so accommodating, because they were made for a specific body type that he enjoys, and they’ve been really great in working with me to figure out how to make that work.”

Posen also assisted with outfitting other members of the 120-plus cast, reaching out to Madison Square Garden executive chairman Jim Dolan to borrow costumes he had designed in 2015 for the Rockettes; for some of the men’s outfits, Posen requested suits from Brooks Brothers, where he’s been the creative director of women’s wear since 2014. “To be able to tell a story through live performance is a very exciting thing for me,” he says, adding that designing costumes for a full Broadway production — and perhaps directing — likely are in his future.

And while Christensen was hesitant at first, ultimately she loved the experience. “I wasn’t sure when Ted pitched the idea — I thought, why do these people want to do this? Their plates are so full,” she says. “But everyone we were guided toward embraced the positivity and the joy and the theatricality of it. I would absolutely do it again.”

Given Vogue‘s history of supporting the New York theater community, from highlighting individual shows to lending style assistance for the Tony Awards red carpet since 2015, such thoughts are an easy possibility, and that’s partly due to Wintour’s love of Broadway. “She’s the person I run into most in all my 18 years of being in business and going to the theater; it’s very much a mutual passion,” Posen says.

Bowles, however, is characteristically modest when it comes to the magazine’s contributions to Lady in the Dark. “In this instance Vogue merely played matchmaker,” he says. “It is the designers themselves, working with Ted and Tracy, who have made the magic happen.” Performances of Lady in the Dark take place Friday at 8 p.m. and Saturday at 2 p.m. at New York City Center, 131 W. 55th St.; tickets are priced from $30 to $175.