[Warning: This story contains spoilers from the entire fifth season of Orange Is the New Black.]

Natasha Lyonne wanted to experience the full swell of emotion the viewers would be feeling when she was filming the final scene of season five of Orange Is the New Black. So she asked the episode's writer, Lauren Morelli, and director, Jesse Peretz, if they could play the song they were planning to use in the episode, The Cinematic Orchestra's "To Build a Home."

"As soon as I heard it, I remember starting to cry," Lyonne, who plays Nicky, tells The Hollywood Reporter. "Everyone started to cry. Hearing the song and the boom helped to really get a grasp on just how intense the moment was."

That "boom" was the sound of an explosion set off by the riot police who had stormed Litchfield to reclaim the prison. The 13-episode uprising had come to an end, leaving 10 key characters standing together, during a unified moment of defiance, in the abandoned swimming pool-turned-bunker where they had been seeking shelter. The prison reform negotiations, led by Taystee (Danielle Brooks), had failed and the CERT team was armed and ready to handle what they assume is a group of resisting inmates on the other side of the door.

"It was very easy to feel the believability of not knowing what was coming through that door while holding hands with these people who I've been with for the last five years," says Lyonne of the final days on set, which took place in the weeks following the 2016 presidential election. In the scene, the women who form the line are (below): Frieda (Dale Soules), Suzanne (Uzo Aduba), Cindy (Adrienne C. Moore), Taystee, Red (Kate Mulgrew), Piper (Taylor Schilling), Alex (Laura Prepon), Nicky, Gloria (Selenis Leyva) and Blanca (Laura Gomez).

The cast remains in the dark about where creator Jenji Kohan will lead them next — and how many of them will be following. "We don't have the next script, so we genuinely don't know," Lyonne says. "We don't know if all of our characters die. If some of us die. We don't know if we kill everybody that walks through that door." 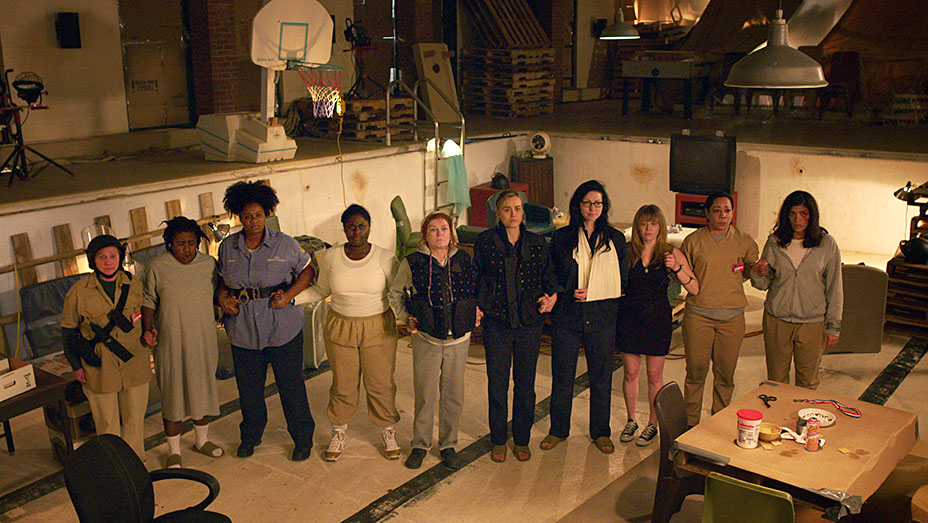 Morelli, who is also a producer on the series and is married to Samira Wiley, who played Poussey on the show, explained the significance of the 10 women who are left standing together in the end, marking the series' biggest cliffhanger to date.

"It was one of the first times in the show, aside from Poussey's death in the cafeteria, where things transcend racial tribes," she told THR, "Having these leaders of the various racial groups come together felt really important: This riot is about all of us." A conversation they constantly came back to in the writers room revolved around committing to the riot, as well as its aftermath. "If this is going to be the season, then that means we are tying ourselves into the reality of the consequences of that," she said. Orange has already been renewed through a seventh season, and one trend the writers always follow is upping the ante from the season prior: "Next season looks different."

In the end, after a season driven by the loss of one of their own with the death of Poussey, the future for the characters Orange viewers love does not look bright. While the 10 inmates were standing their ground inside, the rest of the prison was being split into two with inmates bussed away to unknown locations. Riots tend not to end well for inmates — especially for those who stepped up to lead or, in this case, took guards hostage — and, as the fifth season showed, Orange is committed to shining a light on the reality of the sweeping injustice in America's justice and prison systems.

THR spoke with the women who were left standing in the finale about what they think could happen when they return to set in July to film the sixth season.