How far would a child go to save her father? Far enough to land herself in jail?

That’s the question at the heart of 4 Kids Walk Into A Bank, the critically acclaimed indie comic book series by Matthew Rosenberg — who is now writing a number of series for Marvel — and artist Tyler Boss. It follows the attempts of Paige and her best friends to try and pull a bank heist before her dad can, in order to keep him from making the kind of mistake that would destroy her family.

With the collected edition of the series out this week, Rosenberg talked to Heat Vision about the many ways in which movies influenced the comic, and why, despite that, it still works best as a comic book story.

From the Saul Bass-inspired cover design to the Wes Anderson-esque chapter pages, there’s a strong element of cinema history to 4 Kids Walk Into A Bank. Was this an intentional, “Let’s pay tribute to our favorite filmmakers” thing, or something that came organically from working with Tyler?

It was very much intentional. I think early on I made a joke about how if we were going to make a comic about stealing, we should be proud of what we steal. So, while other people may have tasteful “homages” to their influences, we just steal stuff from them. And that sort of plays into the childlike energy of the book. 4 Kids Walk Into A Bank is all the things Tyler and I love, from old crime movies to video games, old toys to indie comics, George Lucas, David Mamet, Cormac McCarthy, and Looney Tunes. And then we just sort of put it in a blender and rub it all over our comic.

Beyond the visual signifiers, the story itself is a wonderful twist on genre tropes familiar from movies, more than comic books or even crime novels. The Kieron Gillen quote on the back of the collection describes it as “Tarantino does Goonies,” which seems accurate — today, of course, there’s a certain Stranger Things feel about it, especially the video game scene in chapter two. Were any of these things actual touchstones in writing the book?

Kieron is very smart. Tarantino is a big influence for sure. His ability to shift back and forth between humor and violence is something I really admire. And I loved The Goonies growing up. Weirdly, my friend Alex Rubens, who wrote Keanu and was a writer on Community and Rick & Morty, gave us almost the exact same quote, same movies and everything. I had to go back and ask him for a different one, which was extremely awkward. Then he said “Wes Anderson directs Dog Day Afternoon” or something, which was also flattering. So I guess if two different people gave us the same exact comparisons the influence is there whether we own up to it or not. But we do. Crime movies were a big thing for us without a doubt. As for Stranger Things, our first issue came out before the show and I wrote the book before the show came out, so it wasn’t an influence. But I think we obviously drink from the same fountain.

Along similar lines, are there movies and filmmakers that were influences on the book that aren’t obvious from the finished product? Who wouldn’t people believe played a part in the creation?

There is a lot of stuff that is sort of small and personal that folks might not get, but was a major influence behind the scenes. I think a big one is Park Chan-Wook. His ability to find the humanity in dark moments and vice versa is always something I think about. I’d be lying if I didn’t say Star Wars wasn’t a major influence in almost everything I write. Jim Jarmusch is a big influence that seems sort of obvious to me but I haven’t had a lot of people ask about it. Kar-Wai Wong, John Carpenter, and Whit Stillman are other big ones that I assume everyone gets but maybe not.

There’s much more to 4 Kids than just movies, though — there’s some wonderful cartooning going on, and comic book influences from Brian K. Vaughan’s Runaways to Fraction and Aja’s Hawkeye, and what seems like a very funny formalist Watchmen joke in chapter five, if I’m not imagining it. It’s a wonderfully comic book comic, if that makes sense. How did you work out the visual language of the book so that it could contain all these references, influences, and still have its own voice?

Yeah, we definitely wanted it to be a love letter to comics that influenced us as well. We throw little nods to everything from Jimmy Corrigan to Powers to Family Circus, and, yes, even Watchmen. I think part of the reason it works is because we have so much of it, but it’s never the focus. We never hit the reader over the head. It’s just built into the world the kids live in. The things they love filter down into their lives and the things Tyler and I love filter into the work. But really the reason I think all the little references and nods work is because Tyler has such a strong voice of his own. His work is so smart that it can handle incorporating all these elements without making it feel too obvious or kitschy.

I have to ask, why comics? 4 Kids could have been a movie or TV show — and still feels perfectly poised for an adaptation — but everything about it feels like a comic, not something that is secretly a wannabe movie or whatever. What is it about the comic medium that speaks to you as a writer, especially when dealing in genres like this, which is so well-served elsewhere?

I mean, the obvious answer is that we are comic creators so this is what we do. But beyond that, I think there is something special about what comics can do that no other medium can. I used to get defensive when people would say comics are the bastard child of prose and film, especially since comics predate film. But lately, I kind of find comfort in that idea. We take the best elements of other medium and we synthesize them into something new. We make the brain work to piece together the elements they aren’t given. And because of that, there is a sort of versatility to what we can do. We have these striking visual beats, moments where the reader can take their time and go at their own pace. Storytelling-wise it’s a real middle ground that we tried to take advantage of as much as we could.

But also, to me, the world of misfit kids and wild imaginations belongs to comics. Maybe that’s changing with superhero movies now but, when I was a kid, the X-Men, Teenage Mutant Ninja Turtles, Love & Rockets, that was it. That’s where the fantastical and the relatable met. There have been a lot of good attempts in film, but nothing has ever matched the sense of wonder, and possibility, and the complete fearlessness that comics has offered. We wanted to be a part of that.

Last question, but one I couldn’t resist: The 4 Kids kids, the Goonies and the Stranger Things kids are all competing in a scavenger hunt. Who wins? 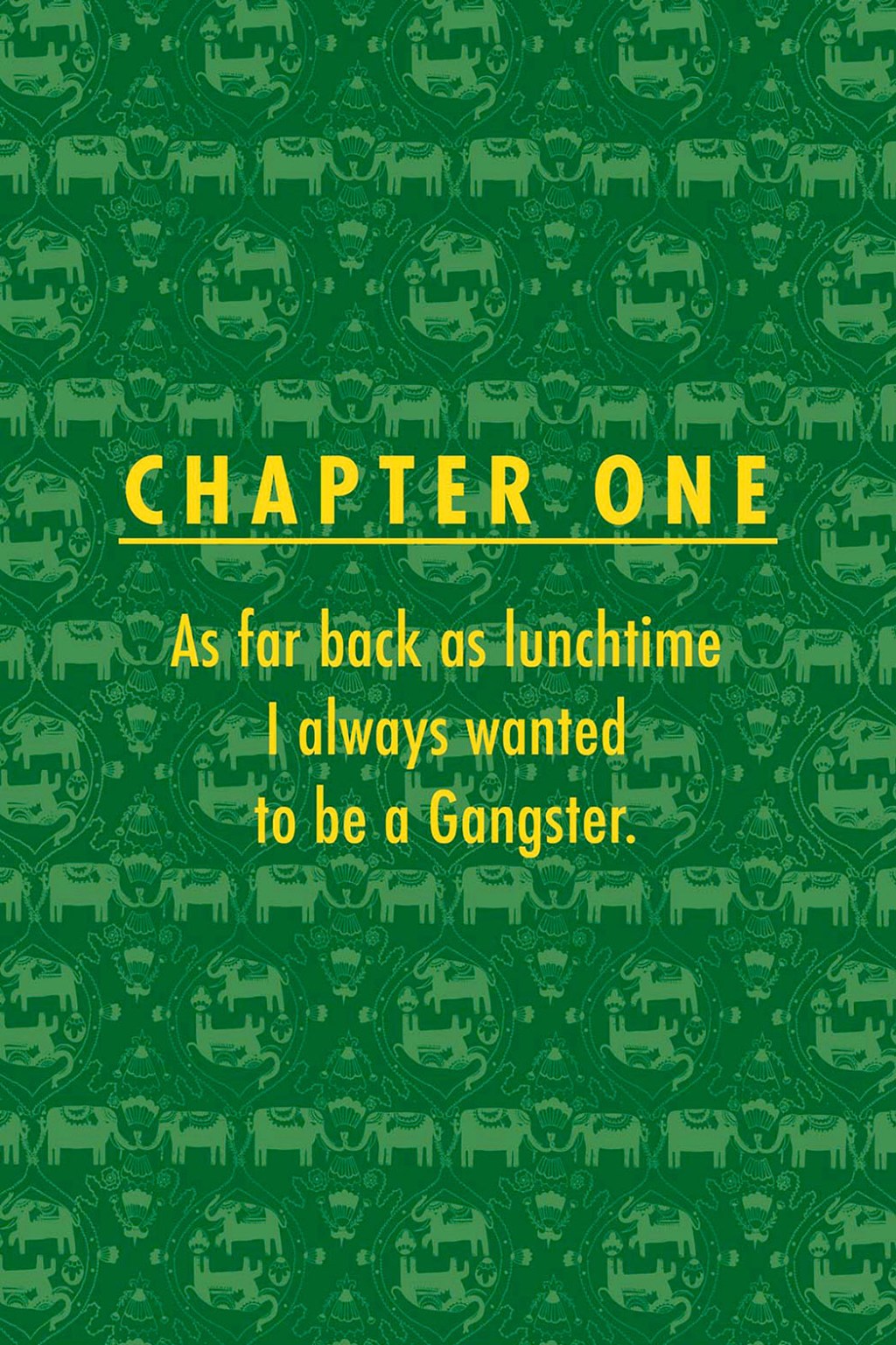 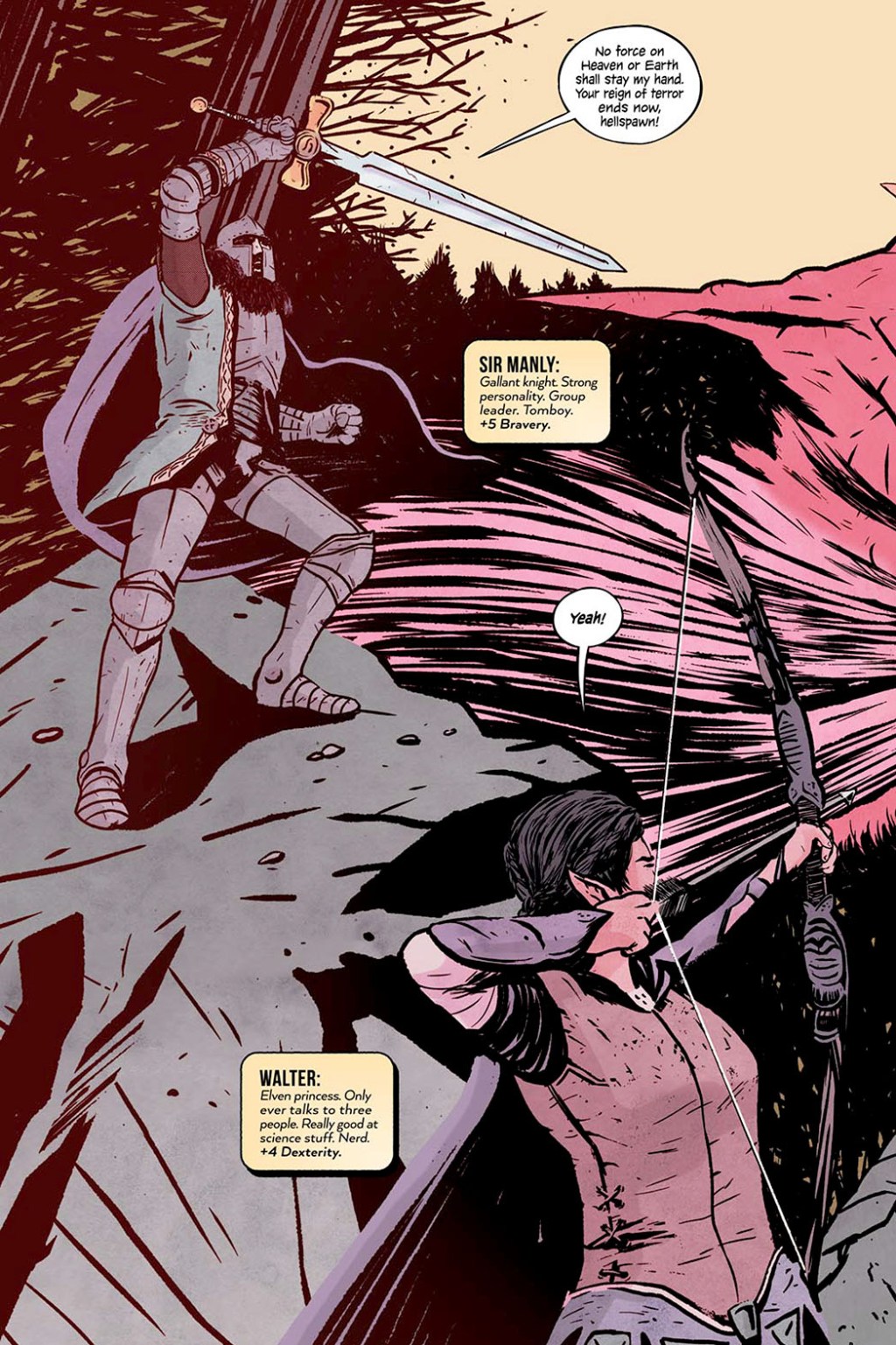 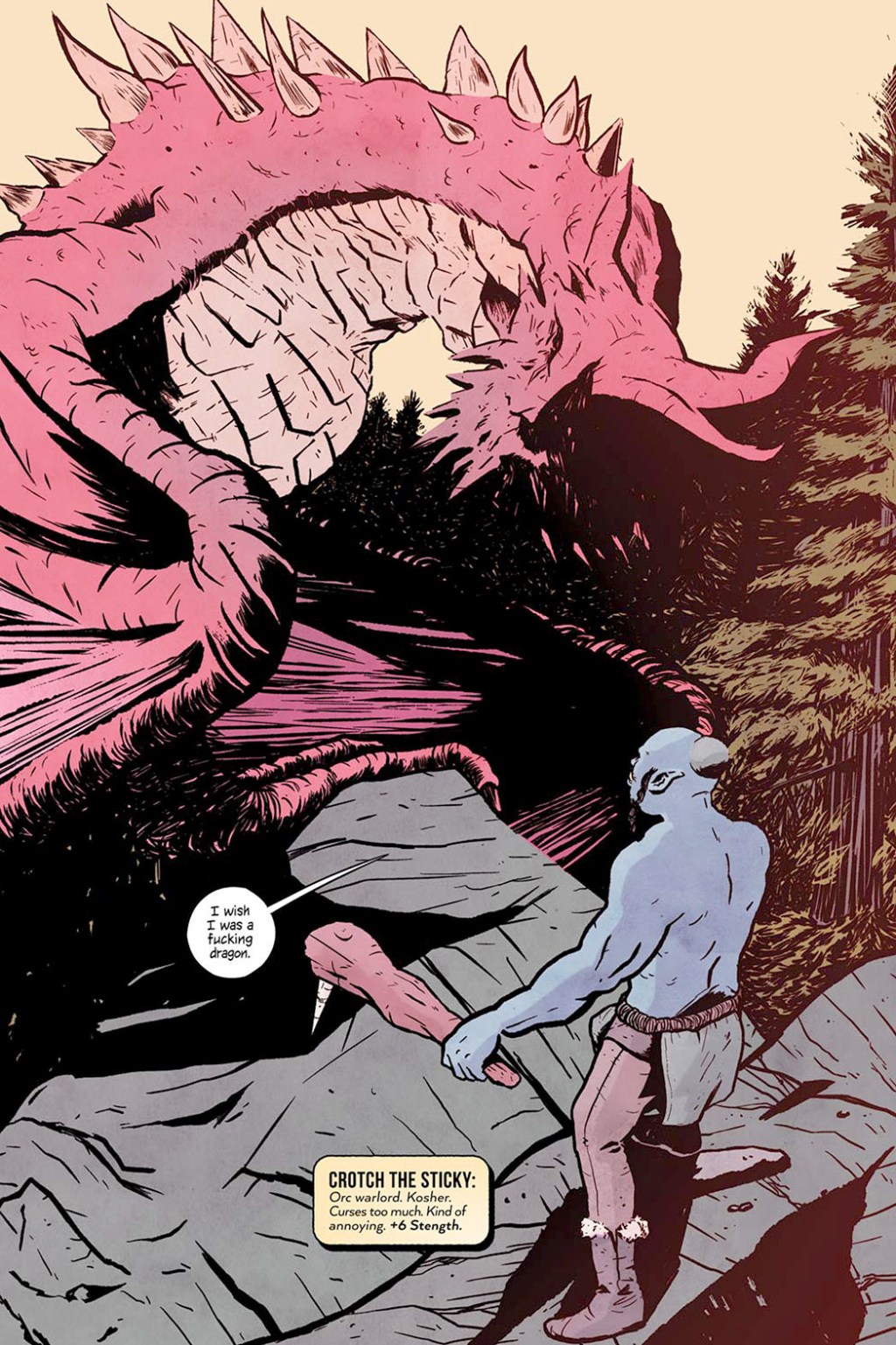 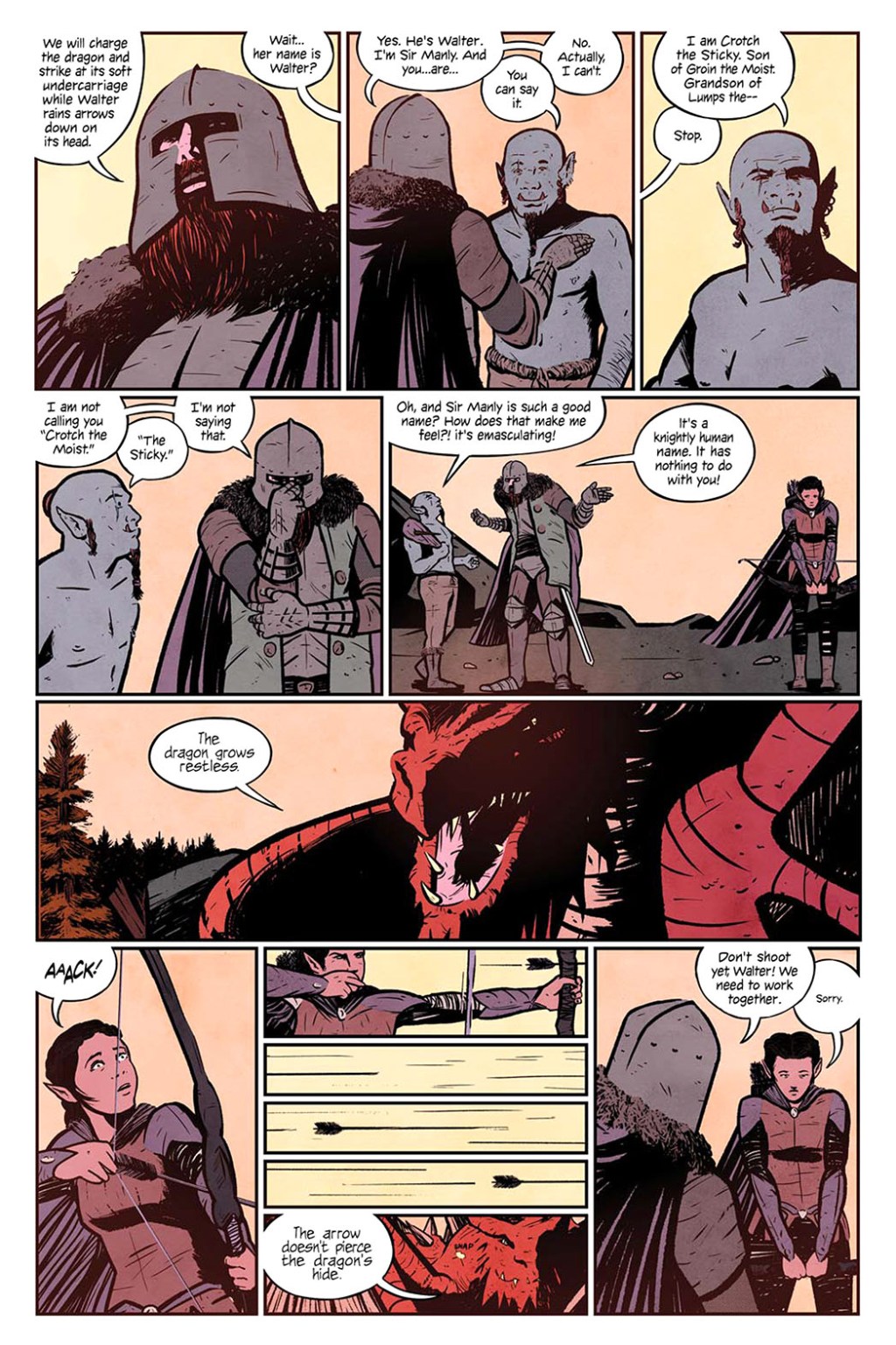 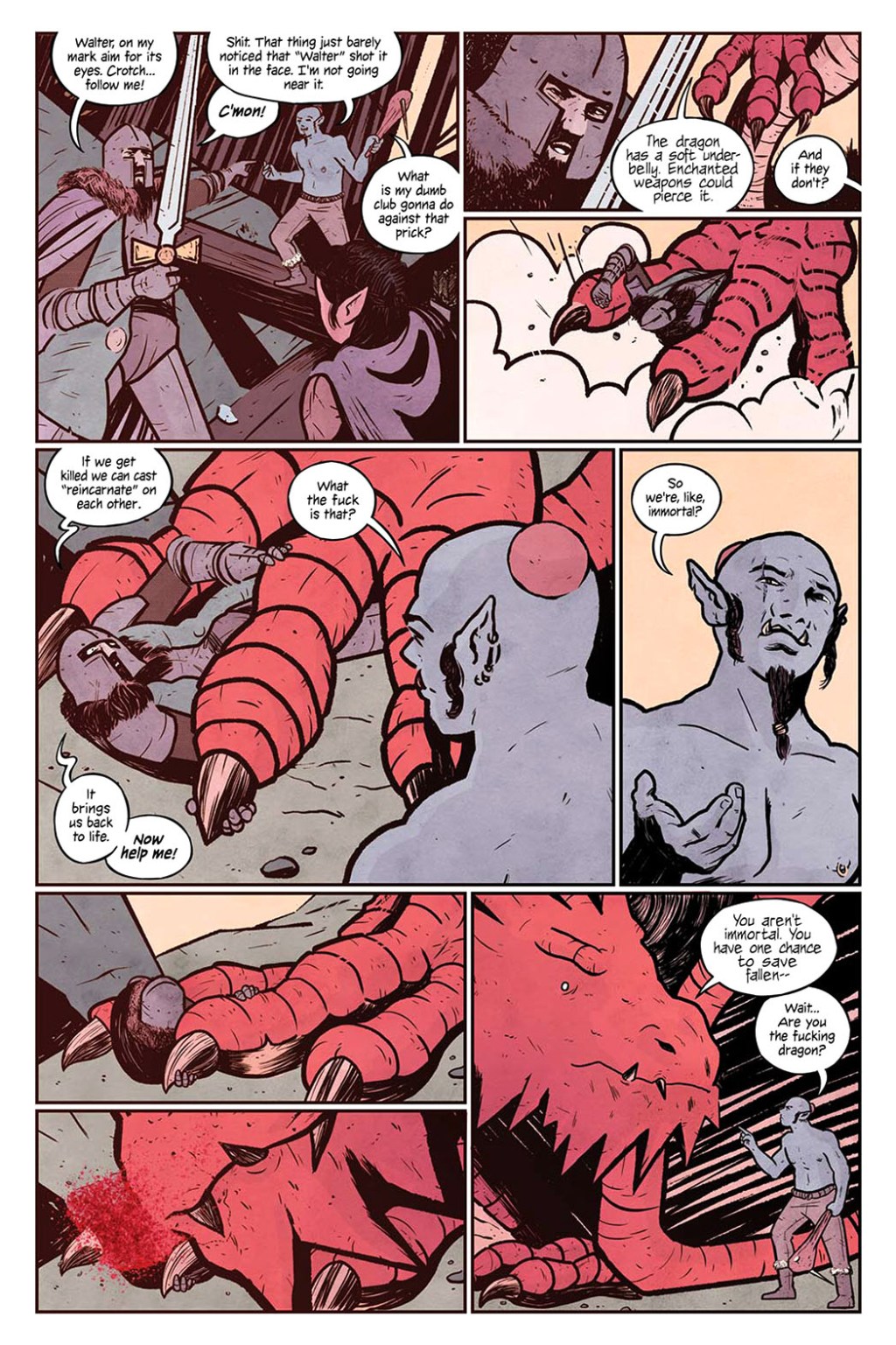 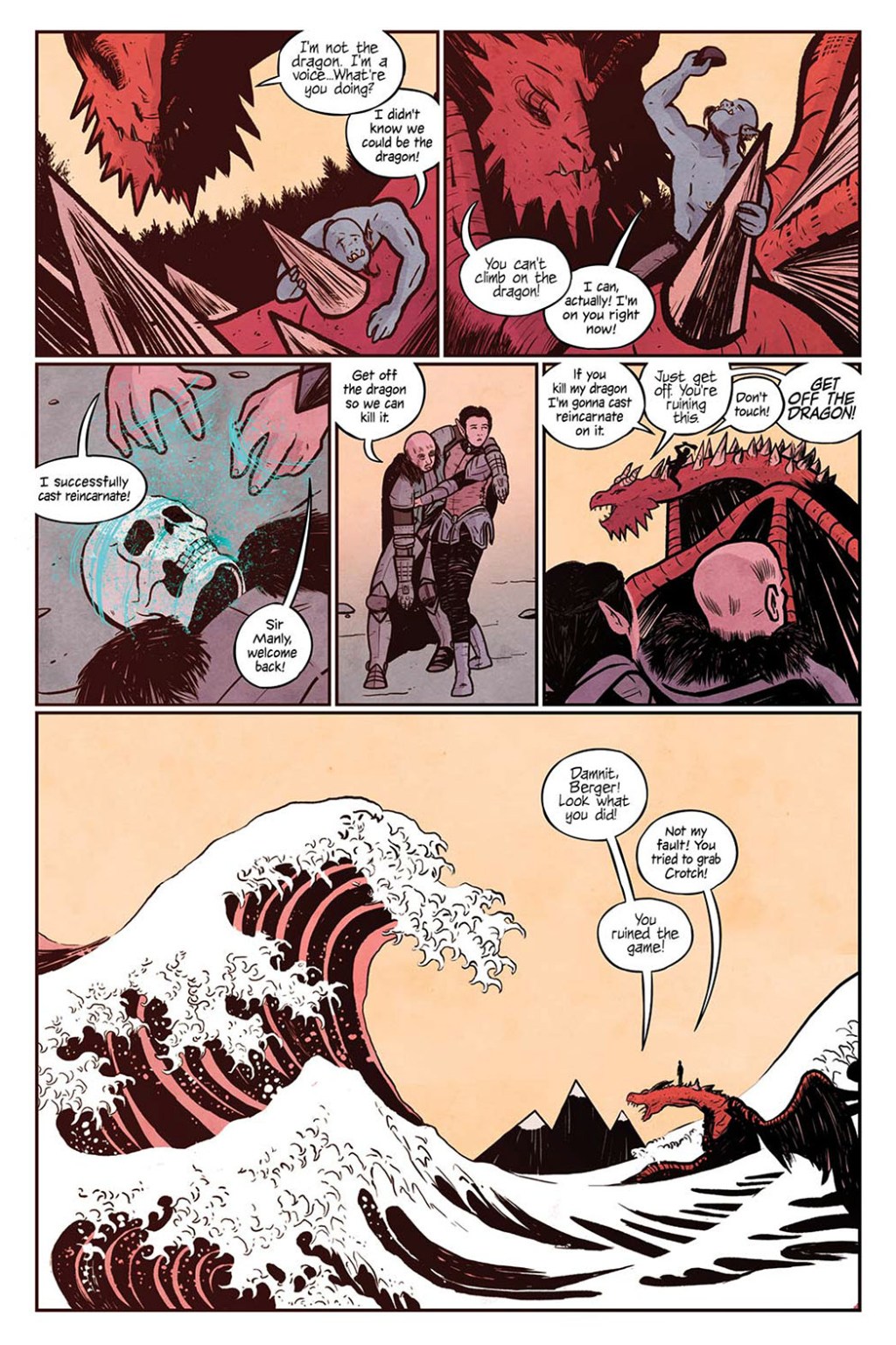 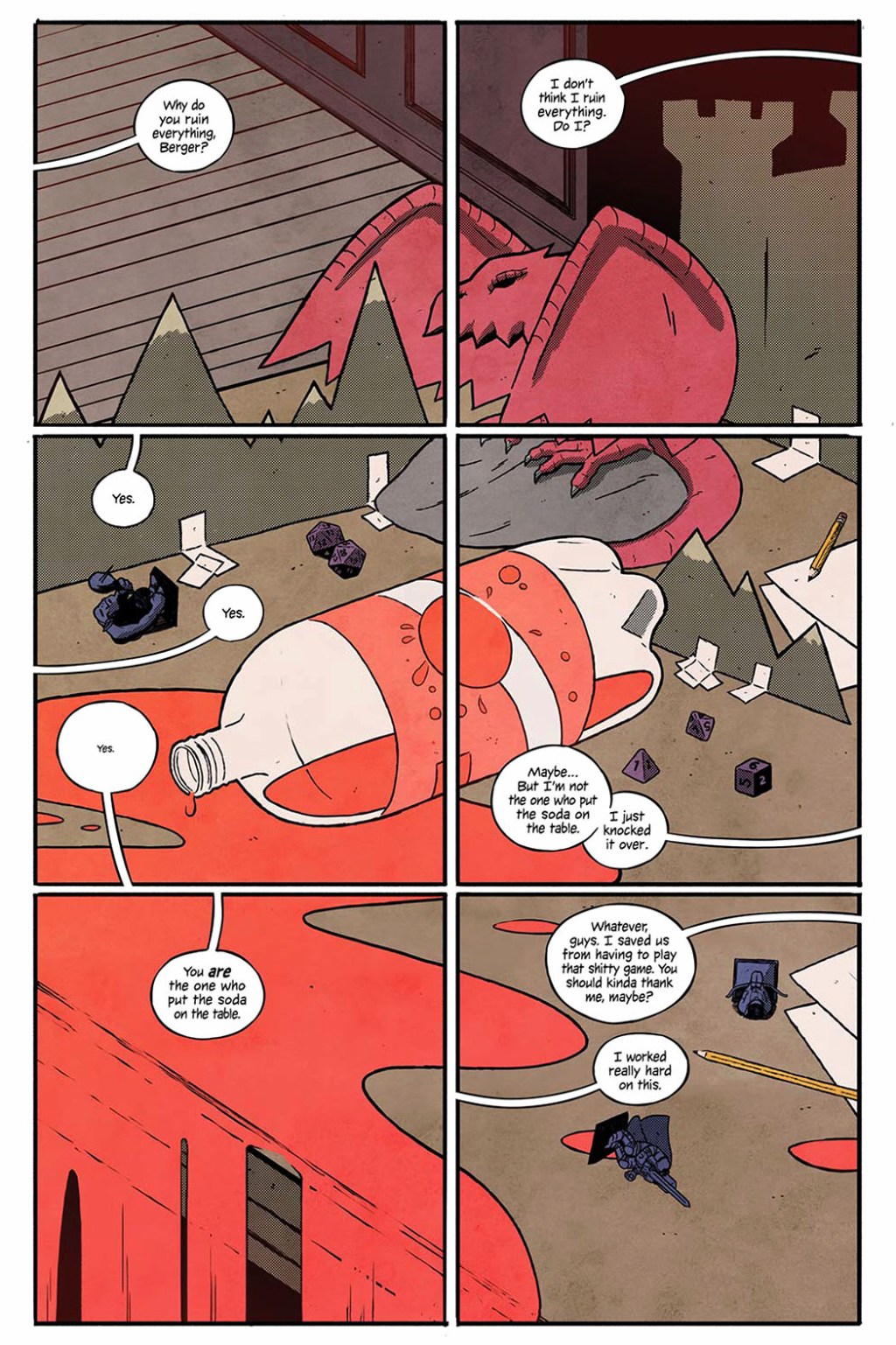 The collected edition of 4 Kids Walk Into A Bank is available in comic stores and digitally Wednesday.