Jennifer Lawrence had some advice for recent New York transplant Mary J. Blige on acclimating to life in Los Angeles. “Just make friends with your neighbors, like I did,” Lawrence, 27, said to Blige, 46, before the start of The Hollywood Reporter‘s annual Actress Roundtable, held Nov. 11 at Line 204 Studios in Hollywood. The mother! and Mudbound stars were meeting for the first time, but Lawrence is already good friends with fellow Oscar winner Emma Stone, 29. And three of the participants — Stone (Battle of the Sexes), Jessica Chastain (Molly’s Game), 40; and Allison Janney (I, Tonya), 57 — worked together on 2011’s The Help. And all seemed endlessly fascinated by the thick Irish accent of Saoirse Ronan (Lady Bird), 23, so much so that nearly everyone attempted their own Ronan impression before the hourlong conversation was over. Of course, it wasn’t all laughs, especially not this year with the horrors of sexual harassment in the headlines. The actresses came with strong opinions on the subject, which quickly segued into a frank debate on how sexism and harassment are intertwined with the issue of pay inequality in Hollywood. Depressing? Yes, but given the attention on this subject, Janney noted, “It’s exciting to think of our culture changing.”

Let’s rip the Band-Aid off. Headlines in Hollywood have been all about instances of alleged harassment. Some people believe the entertainment industry will never be the same.

Emma, what is the worst career advice you’ve been given?

STONE Probably something that Jen told me. I don’t know. Probably advice I’ve given to myself.

LAWRENCE She is so hard on herself.

STONE I tend to keep myself prisoner in mistakes that I’ve made, and I kind of need voices like Jen’s — and I’m really lucky, I have a great manager and agent. They’ve always been very [encouraging] about taking chances. And I’ve gotten more excited to play people that are unlike me or where I need to go into different worlds. Now that I am able to see how rewarding it is to lose yourself in someone else’s experience — to find these people that are nothing like you and let their traits infuse your life — I mean, playing Billie Jean King has truly changed my life. She has infused so much into my spirit, it’s incredibly exciting.

How much did you interact? What did you learn from her that you used in the film?

STONE Early on when we met, I sat with her and her partner, Ilana, and we talked for a long time. Then we got each other’s phone numbers and started talking about things, and I realized she had over 40 years of hindsight on those events. So I realized pretty quickly that watching footage of her at that time, studying as much as I possibly could, was going to benefit me in a different way because she was in the midst of so much turmoil and struggle and yet had to put on this public face as essentially the leader of quality in her industry.

You had to be convinced to do that role?

STONE Sort of. Because for a long time I was playing different versions of myself, teary cry smile and all.

STONE But as time has gone on, it’s become incredibly rewarding to take risks, to dare, to not be afraid to make mistakes. As the most anxious kid you’ve ever met, my whole life has been defined by, “Please don’t mess up, I can’t mess up.” And that’s changing, which is incredible.

Is there something memorable that an acting coach or mentor has said to you that you carry with you for each performance?

BLIGE Well, my acting coach is one of my friends. So [on Mudbound] I was going through hell in my personal life and I just ran over to her house and threw myself on the floor and started crying. And she was like, “This is what you do.” She didn’t baby me, she said, “You take all of that shit, and you give it to Florence.”

JANNEY Sanford Meisner told me, “Don’t let anyone tell you you’re too tall to act.” (Laughter.)

STONE That’s like that James Dean quote, “How can you measure acting in inches?” They told him he was too short. (Laughter.)

CHASTAIN Al Pacino directed my first film [2013’s Salome], and he said that for film, it has to be real. So whatever you are feeling, the camera is an extension. It can see more into you than your scene partner. Look at it not like it’s a separate thing but like it’s part of your body almost; it has a direct link to your soul. Whatever you’re feeling, you can try to hide it, but the camera is going to get it.

RONAN I did a period film recently [Mary, Queen of Scots], it was set in the 16th century and I was trying to figure out a scene. So much of it is this beautiful, traditional old language, which is great, but it’s very hard to get to the heart of it. I was talking to one of the other actors and he said, “You know, what it comes down to is you just have to talk like a human.” And as soon as he said it to me, I just kind of went, “Oh yeah, that’s actually it.” No matter what era you’re in or what kind of language you’re using, it’s just about remembering that this person is just a human being.

Who’s the actor, living or dead, that you’d most like to meet or collaborate with?

CHASTAIN Gary Oldman and Isabelle Huppert are my favorites. But Isabelle played my mother in a movie [2013’s The Disappearance of Eleanor Rigby]. So Gary Oldman for sure. Since I was a little kid, he is someone that, when you watch from performance to performance — he doesn’t look like himself.

LAWRENCE You never recognize him.

CHASTAIN I’m sure he can go down the street and people don’t recognize him, which is insane to me that people wouldn’t recognize Gary Oldman. But he is a shape-shifter.

LAWRENCE I said that earlier, so I want to say I think Jessica stole that from me.

CHASTAIN Um, in 2012, I did an interview where I said he was my cinematic crush! (Laughter.)

LAWRENCE I’m going to say Bill Murray. But I hate answering these questions because there are just too many.

STONE If I don’t do something with Diane Keaton before the end of time, I don’t know what I’ll do. She is my everything. I love her, I talk about her a little bit too much. I also absolutely love Hank Azaria. He is criminally underrated and brilliant.

BLIGE Frank Sinatra because of course he was a great singer, but I didn’t know he was a great actor like that. Angela Bassett is another one and her (points to Janney) because she is just amazing in Juno. She made me laugh till I cried.

I know it’s hot under these lights — we’re going to have one final question.

LAWRENCE Also the chairs are very hot. If you ever invite me back, please give me a butt doughnut.

JANNEY Oh, God, that would be good.

CHASTAIN Not a doughnut to eat.

LAWRENCE Not a mouth doughnut. Or sure, either one.

LAWRENCE “You are not a stand-up guy.” That’s from Silver Linings Playbook, and whenever David [O. Russell, who wrote and directed the film] makes me mad, I always say it to him.

How often is that?

CHASTAIN Whenever someone recognizes me, they always say, “I’m the motherfucker who found this place, sir” [from Zero Dark Thirty]. It’s good.

RONAN “Adapt or die, think on your feet — or think on my feet — even when I’m sleeping.” From [the 2011 thriller] Hanna. Her dad is basically preparing her, and she’s got all of this drilled into her head in order to go out into this world that she knows nothing about. But that’s quite a good thing to remember, to just adapt to every situation that you’re in as much as you can.

JANNEY I have a good one that actually I’ve wanted to say in probably every movie I’ve ever done, but I get to say it in [I, Tonya]. “Well, my storyline is disappearing. What. The. Fuck?”

BLIGE “Love is a kind of survival.” Florence Jackson.

LAWRENCE I auditioned for Easy A. I wanted it so bad. 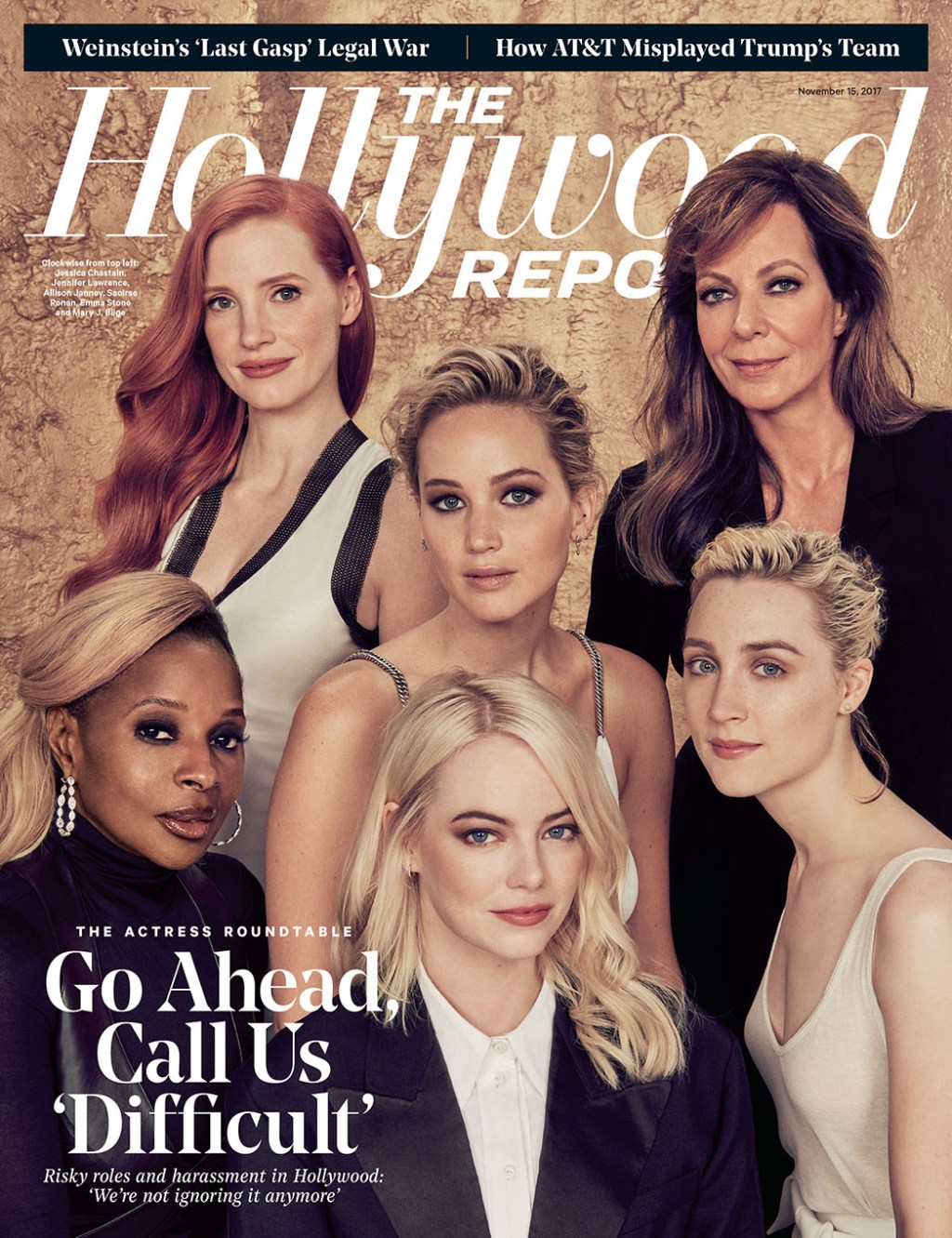