It’s the one thing everyone has agreed on: Not much actual negotiation has occurred during the increasingly pitched battle between the Writers Guild of America and the Association of Talent Agents as the April 6 expiration of their franchise agreement approaches, and Hollywood faces the uncharted waters of screenwriters breaking up with their agents en masse.

Each side has accused the other of noncooperation during the seven in-person meetings (ostensibly negotiating sessions) held between Feb. 5 and March 26. According to agents present at the March 21 gathering of about 60 agents, writers and other negotiators, WGA executive director David Young outlined his three-pronged strategy: Phase one is about proposals. The current second phase is “threatening, galvanizing, attacking,” he continued, according to an agency source. Only after that is phase three: “negotiation and peace — but we’re not there yet.”

The two points of contention: the decades-old collection of packaging fees, whereby agencies receive an ongoing sum from studios in exchange for having bundled one or more clients (writers, directors, actors) on a project, and the newer trend of affiliate production, wherein the three largest agencies (WME, CAA and UTA) have developed sister companies that take ownership stakes in content. The agencies argue that both activities are not only necessary in order to adapt to a landscape increasingly dominated by mega-media consolidation and digital disruption, but also beneficial to their clients — 10 percent commissions are waived on packaged shows, and agencies insist that affiliate production offers more choice and potentially greater financial and creative opportunities for creators. But the WGA calls them fundamental conflicts of interest that disincentivize agents from doing their best to get their clients the best deal possible, citing declining overscale pay as evidence: In 2017-18, median episodic fees for co-producers and executive producers were $14,000 and $32,000, respectively, down from an inflation-adjusted $16,400 and $54,600 from 1995 through 2000.

The WGA has drafted a Code of Conduct requiring any agencies that wish to represent its writers to forswear both practices. On March 31, the membership voted overwhelmingly by a tally of 95.3 percent (nearly 8,000 writers) to authorize the guild to implement the code if a new franchise agreement governing the relationship is not reached by April 6, after which the WGA has said it will direct its members to walk away from any agencies that refuse to sign the code. None of the four biggest firms — WME, CAA, UTA and ICM Partners — is expected to sign, and the handful of agencies at the next tier may not either, which means a potential mass exodus of thousands of writers on the eve of television staffing season. Such a move could throw a wrench into a critical, foundational stage of the Peak TV machine, or, as a top executive at a Big Four agency puts it, “Why would anyone disrupt the TV business at this time?”

So what comes next? It’s possible that the two sides could postpone the agreement’s April 6 expiration and allow staffing season to proceed unhindered. But the guild has made a point of insisting that a patchwork of managers, lawyers, signatory agents (from smaller agencies), writer-to-writer networking and an online script submission system will be an adequate substitute for the banned agencies. That suggests an extension is unlikely.

The most optimistic outcome is a deal, struck either by April 6 or after an extension, and the writers are hoping their resounding vote to approve the code of conduct signals that it’s time to get serious about finding a solution.

“The opening moves are always going to be adversarial,” says John Rogers, showrunner of TNT’s The Librarians. “Whatever illusions the agencies had that they would not have to make some sort of deal is gone, and that’s good. They’ve been telling us that they are the best dealmakers in the world — now prove it.”

In the event that the agencies agree to drop packaging fees, which is possible — those fees have declined as short seasons and streaming services have made lucrative backends more rare — it’s doubtful the guild would allow agencies’ in-house production to continue in its current form. And production companies affiliated with the likes of WME and CAA, both owned by private-equity firms eager for an IPO, are seen as a key component of their growth strategies. When reports surfaced March 29 that Endeavor, the parent company of WME, was planning to go public this year, the WGA promptly issued a blistering statement: “Writers will not be leveraged by their own representatives into assets for investors.”

If no deal can be reached, will the union make good on its threat to direct its writers to leave their agents? More than 800 scribes, including prominent showrunners such as Vince Gilligan, Damon Lindelof and Amy Sherman-Palladino, have signed a Statement of Support pledging that they “will only be represented as writers by agencies franchised by the Guild” — although the careful language indicates that high-level multi­hyphenates such as showrunners, who are writer-producers, might be able to stay with their agencies under their other roles. Twitter is dotted with countless more who have changed their profile pictures to blue “I Stand With the WGA” icons in solidarity. Despite the rancor, many profess to be on good terms with their individual representatives, and some emphasize that nobody is firing anyone.

“That’s a misrepresentation of the issue,” says truTV’s Adam Ruins Everything showrunner and star Adam Conover. “The guild has made it very clear that they are not going to extend the franchise to organizations that are violating state labor law, and they have the approval of their membership to make that distinction. Agencies who don’t sign the code of conduct are voluntarily saying ‘we are not going to represent WGA writers anymore.’ They’re going to be opting out of representing writers.”

Predicting “chaos,” ATA executive director Karen Stuart says leaving agents will “hurt writers who are not in deals, don’t have their next job and have been historically underrepresented in our industry.” But Rogers says that the high-profile showrunner support does not come at the expense of rank-and-file writers, because the union’s stance is precisely about protecting “the mid-level writers getting squeezed at the expense of the package.”

The WGA reassures that writers will get by without agents, either by relying on managers and attorneys or by making use of its newly created Staffing Submission System, a database that showrunners can use to populate their rooms via direct applications from interested writers.

Writers — and some agents — who leave their powerhouse agencies may end up at smaller shops, several dozen of which (not all members of the ATA) are rumored to have signed the WGA’s new code. Other agents will likely become managers and continue to make deals for their clients in that capacity. Many managers do this already, although it’s a violation of state law in California and New York for them to procure or negotiate employment for a client, and there’s no guarantee that the guild won’t take on the manager community next, perhaps with legislative lobbying or litigation.

As for the agencies, “we will be fine in the short and medium term,” says the Big Four top exec. “The bulk of our writers are on long-term deals. Our packages are locked in for years.” Chris Barrett, former owner of then-midsize Metropolitan Talent Agency, suggests that the large talent firms may even use the anticipated en masse departures “as an opportunity to cull the herd.”

Before a truce is reached, the battle may get uglier, including the possibility of nasty litigation. Precedent, including a 1981 Supreme Court case, establishes that unions have the right to regulate agents, and packaging fees may be vulnerable. “If agents are accepting fees from studios and failing to aggressively negotiate to improve their clients’ episodic fees and profit participation, that is a clear-cut breach of the fiduciary duty of loyalty,” says business litigator Aaron Craig of King & Spalding. But the agencies can better afford to litigate, and may counter that the WGA has breached aspects of the agency agreement and is intentionally interfering in their contracts with clients.

“In the long run, we will make a deal with the WGA,” says the agency executive. “If somehow packaging were to be eliminated, there would be changes to our agent lineup. If affiliate production and film finance efforts were terminated, there would be dozens of agents and executives eliminated.” One entertainment attorney who reps writers thinks it may not come to that: “Maybe firing the agents will have some cathartic effect and there will be a psychic willingness to go back to the bargaining table.”

That’s exactly what the writers want. “Give us a deal that makes this work,” Rogers says. “There’s a bunch of perfectly reasonable compromises, they just have to be the ones to come up with them. Because for the first time the writers are smart enough not to negotiate against ourselves. Nobody wants to leave their agents.” 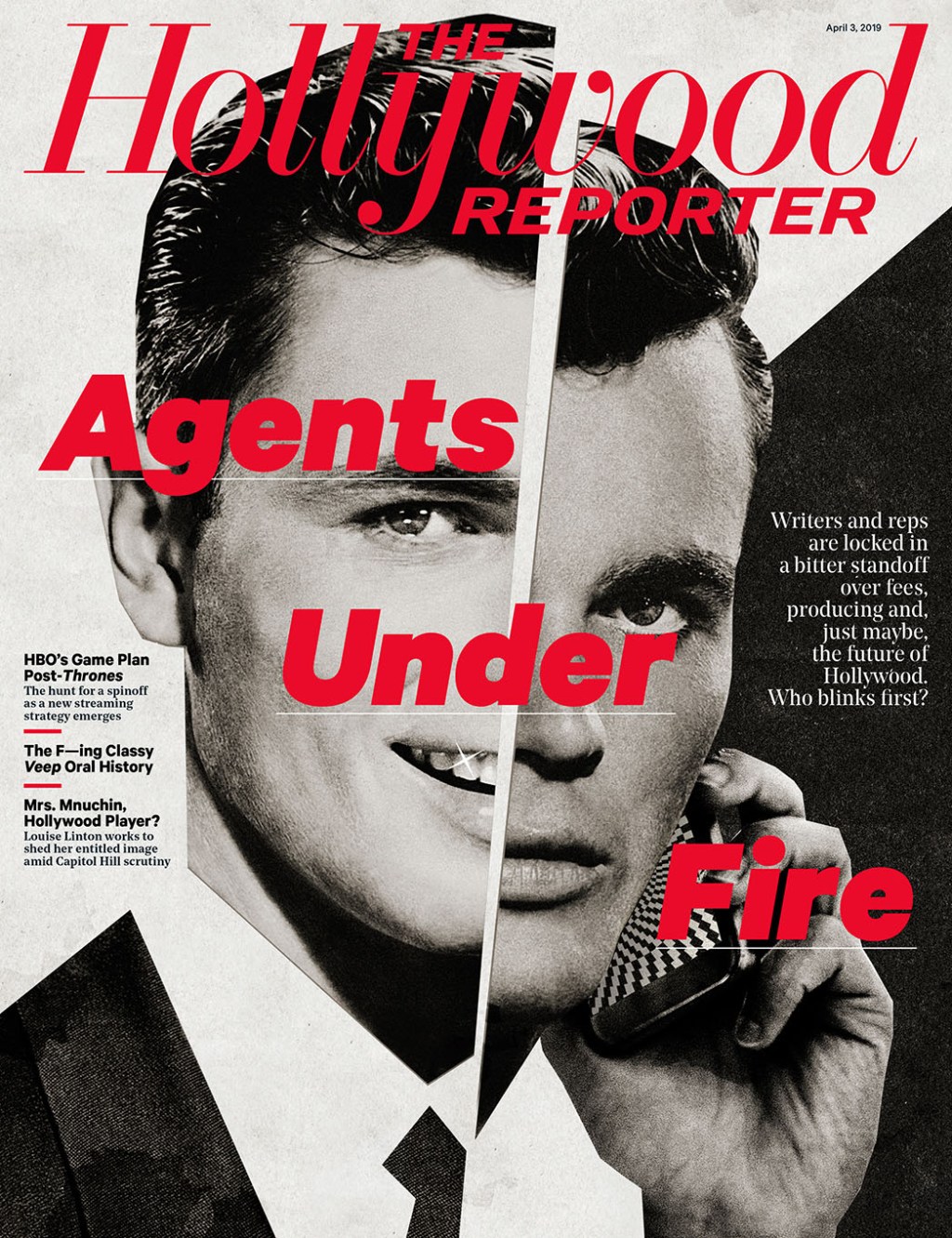 For more on this subject, visit THR‘s labor page.