Traversing through England in 873 C.E. on horseback was at the center of a hands-on demo for Assassin’s Creed: Valhalla, the 12th major installment in the action role-playing video game series.

In a remote session hosted by developer Ubisoft, The Hollywood Reporter recently swapped a laptop for a Viking’s crossbow and explored various villages, camps and shipyard gates, meeting farmers, merchants and Norse warriors along the way.

Quest director Philippe Bergeron, who worked in collaboration with the script and world designer to undertake historical and fictional research and orchestrate the objectives players are asked to complete, actually traveled to England and Norway — where the game is also partially set — with the core Ubisoft team as part of his preparation.

“There’s something in that moment, right, seeing the giant mountains — you can understand that they [Vikings] would think that the Gods built this and that it comes from another realm,” Bergeron tells THR. 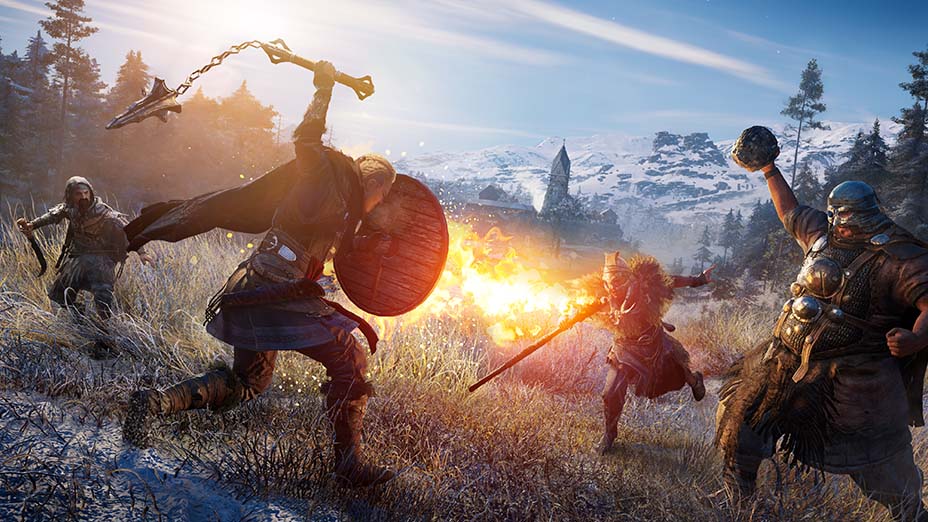 He goes on to say that a lot of the quest design in the game was about hitting the fantasy points of what being a Viking actually means. “One of the things we wanted to be sure to portray was who Vikings were as people,” says Bergeron, whose love of video games began at age 4 with Pong and was cemented with Metroid on the Nintendo NES console.

“We’re used to seeing a lot of Viking entertainment in movies and comics and TV shows, where Vikings are portrayed as the bad guy, as brutes or vicious warriors,” he continues. “One thing we wanted to show was what the culture was, where they came from, who they were, how their communities lived.”

That’s where physically being in the locations was a real benefit. “Arriving from England, you’re leaving a place that is very cold, harsh and hard, and then you find these lush rolling hills with animals roaming everywhere, buildings that seem to be unprotected. For us, that was that sort of Viking moment of why you would want to raid — if you arrive and you’re hungry and you need to survive and get your people in place, and then seeing all these resources that seem to be ripe for the picking.”

With the option to follow the beaten path or explore off-course, the story introduced the main protagonist Eivor, a commanding, tough-as-nails female warrior with face tattoos, a striking physical presence and a surprisingly poetic way of speaking. A young man named Finnr also popped up, his deteriorating physical appearance matching his verbal statements of being exhausted and needing a nap.

From there, THR engaged in many battles and navigated savage seas with a fleet of men. Stealth attacks and more than a crossbow — the wielding of an axe — were required to defeat touch enemies, which took strategy and patience. 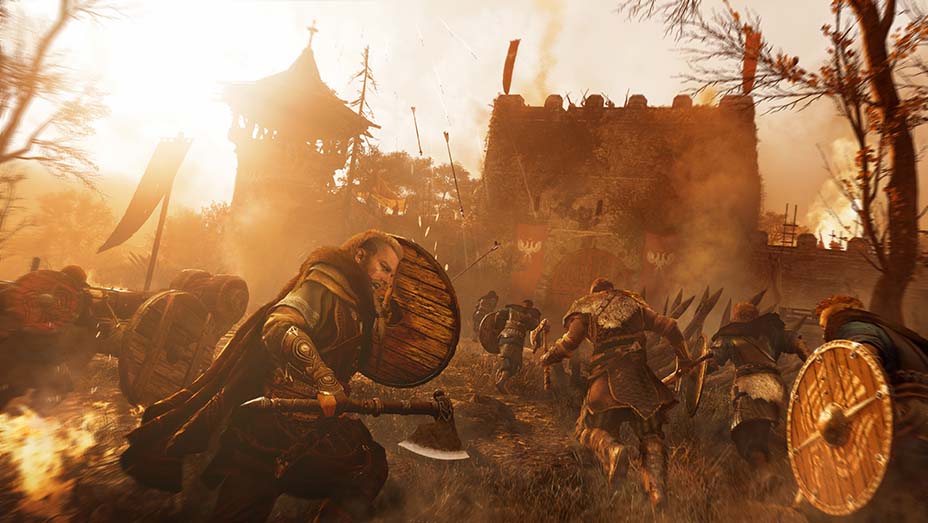 In this game, Bergeron explains, Ubisoft leaned more into the herd mentality of a Viking. “When you think about being a Viking, a Viking is never alone and you’re very rarely out in the wilderness alone, you always imagine Vikings having their crew with them,” he says. “So very early on that was one of the things we wanted to focus on.”

Of course, that brought many graphic and AI challenges as a lot of men had to be running at once. “But from the beginning, we knew we had to deliver on it,” continues Bergeron, whose body of work also includes the Shaun White snowboarding games and Prince of Persia. He says that in previous Assassin’s Creed games, the protagonist was more of a “lone wanderer,” especially when on land.

When players move through the game, they can hear the atmospheric sounds of their horses trotting and galloping. That’s complemented with various characters talking in a lively way.

“When you play the game, and at some point we ask you to leave England and arrive in Norway, a lot of it is inspired by that feeling of opportunity that comes with arriving in a new world that seems filled with potential,” says Bergeron.

The game will release in the holiday season this year.