When producer Sidney Kimmel and his wife, Caroline, decided to concentrate their life in Beverly Hills last year, combining the art that they’ve collected over the years in their Malibu, New York City, Palm Beach and Aspen homes proved to be a challenge. “I started to think how I could make that art read all together in this environment and not feel as if it’s a museum,” says Caroline of the $27 million, 6,330-square-foot home, “and to have some meaning and to be able to live with it.”

The “design program was led by a Chinese screen,” an 18th century work with six panels of lacquered wood and paper that measures nearly 10 feet tall by 15 feet wide, she says. “If I could find a wall big enough, then I could dial in the entire design.” Sidney discovered a house that fit the criteria while reading THR‘s real estate section in late 2017. Before the Kimmels could close on the house, I-Grace Construction, which had worked on the couple’s Malibu property, was tasked with locating the split-faced travertine in Italy to create length and additional walls. With the support of designer Chris Barrett (who recently completed the renovation of John Stamos’ home) and SUBU Design Architecture’s May Sung, the Kimmels met their target of moving in within eight months. The couple trusted Withey & Co. to transport their art and other valuables within town. East Coast-based Classic F.A. handled the cross-country job. 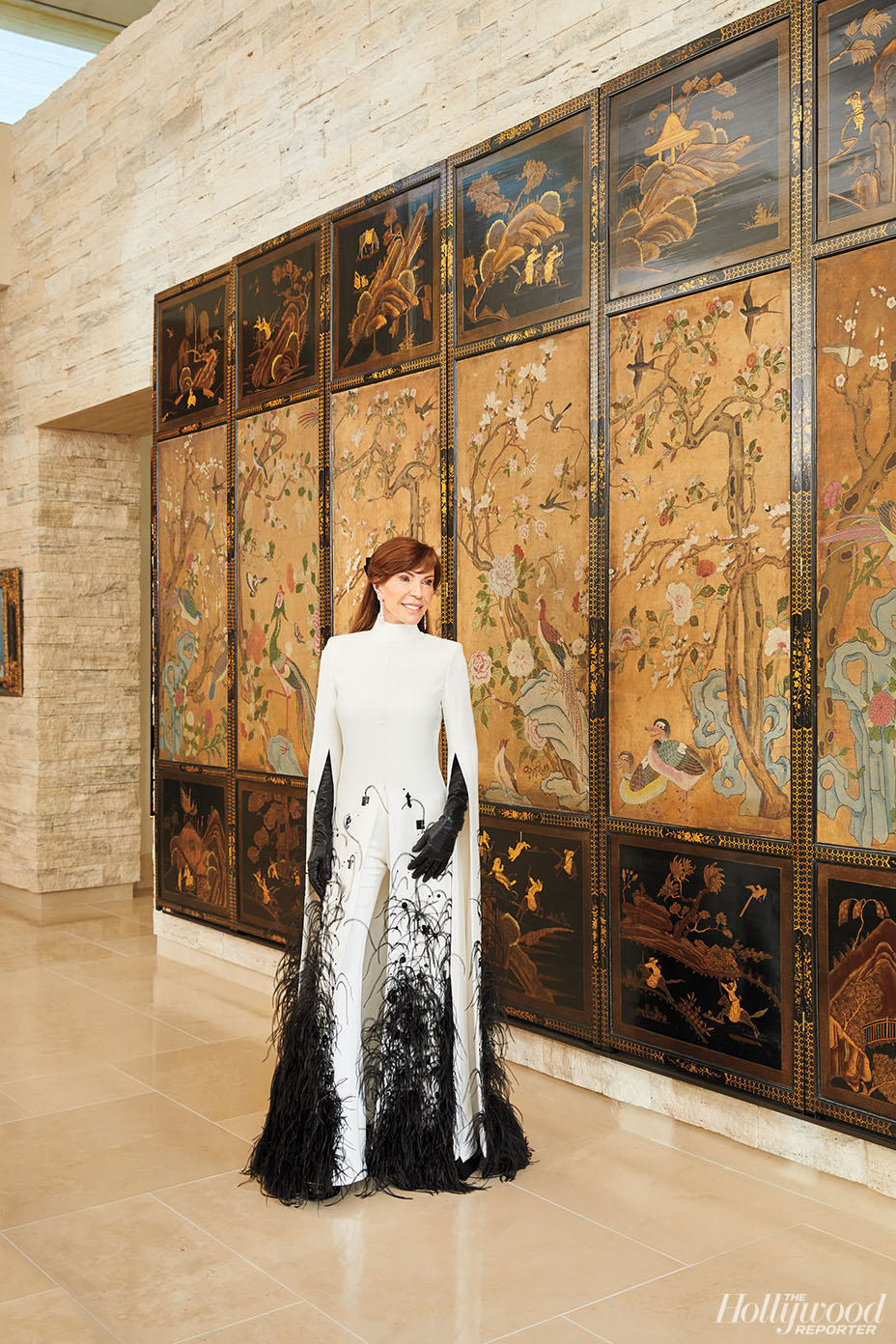 Other changes that occurred before the move-in: The open-plan kitchen was enclosed, creating a cozy den for watching movies and a sunny breakfast area that looks out over the retiled pool, where the couple enjoys a morning ritual of breakfast and the papers. “Every single day whether it was Palm Beach, New York, Malibu or here, we sit and have breakfast together,” says Caroline. The couple, who have never spent a night apart in 21 years of marriage, were first introduced at a black tie event in Philadelphia, where the producer’s philanthropy via his Sidney Kimmel Foundation has made a mark, having created such institutions as the Sidney Kimmel Medical Center, the Sidney Kimmel Laboratory for Preventative Cardiology, the Sidney Kimmel Cancer Center at Thomas Jefferson University, the Kimmel Center for The Performing Arts, the National Museum of American Jewish History and the National Constitution Center. To the latter, “Sidney made a substantial contribution,” Caroline says of the $7 million gift among the $850 million that the producer has given away in total, in and outside of Philadelphia. “He built a theater that offers multimedia introduction to the context and historical significance of the Constitution. To me, that gift is vital, especially today.” (The Kimmels are also the largest donors to the Elton John AIDs Foundation, as the singer’s manager helped bring the couple together). 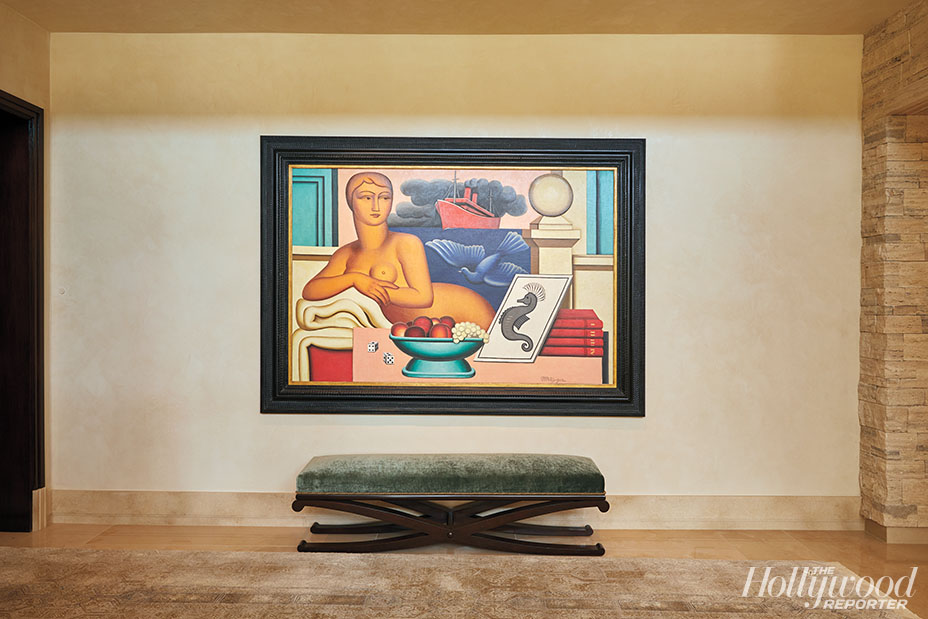 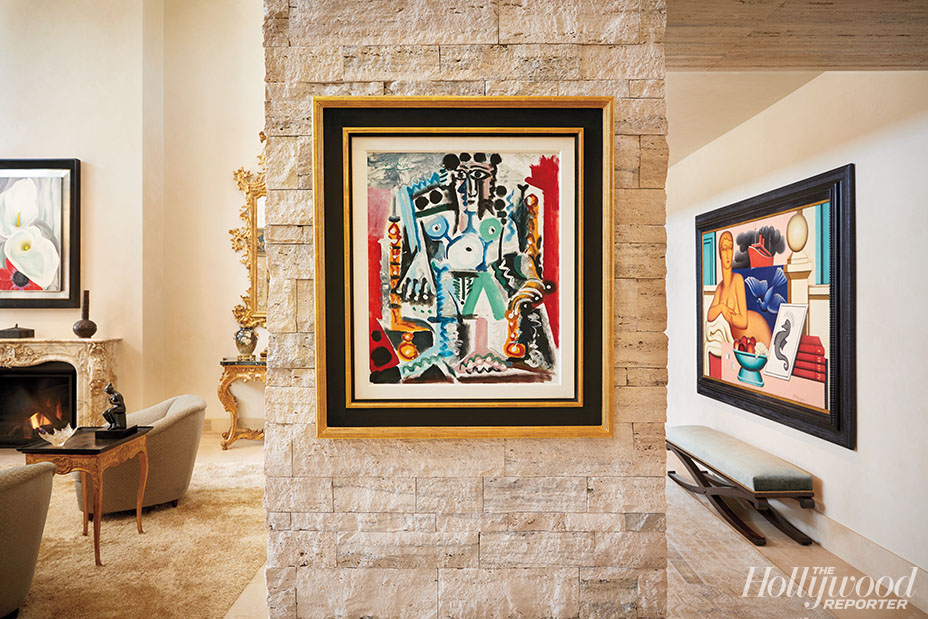 One of the newly created walls showcases Giacomo Manzù’s Buste de Inge from the Malibu residence, flanked by two large 1930s French Deco hand-painted vases found at Therien Antiques on La Cienega Boulevard. “It was like playing three-dimensional chess,” Caroline says of finding the perfect spot for each piece. She designed the dining room’s chairs and carpet, picking up the distinctive blue-green from the Chinese screen. “If you look at the colors in the screen, you’ll see they’re reflected everywhere.”

In the living room, the subtle shade coasts over the space’s ample furniture and is picked up in Georgia O’Keeffe’s Calla Lilies With Red Anemone (a similar piece set a record at $6.2 million), which gets a prime spot over the fireplace. “Sidney gave me this picture for one of our anniversaries. I consider it to be really special because she’s one of the greatest American female artists of all time, and she made the frame,” says Caroline. “She only did nine big flower paintings.” (Jim Dine’s Two Hearts, which hangs in the hallway nearby, was another gift from Sidney to Caroline; it was painted by the artist to celebrate their wedding, which took place at their former home in Palm Beach in December of 1999). Jean Metzinger’s Femme à la Hippocampe vies with Giacometti’s Grande Femme Assise for second billing in the room. 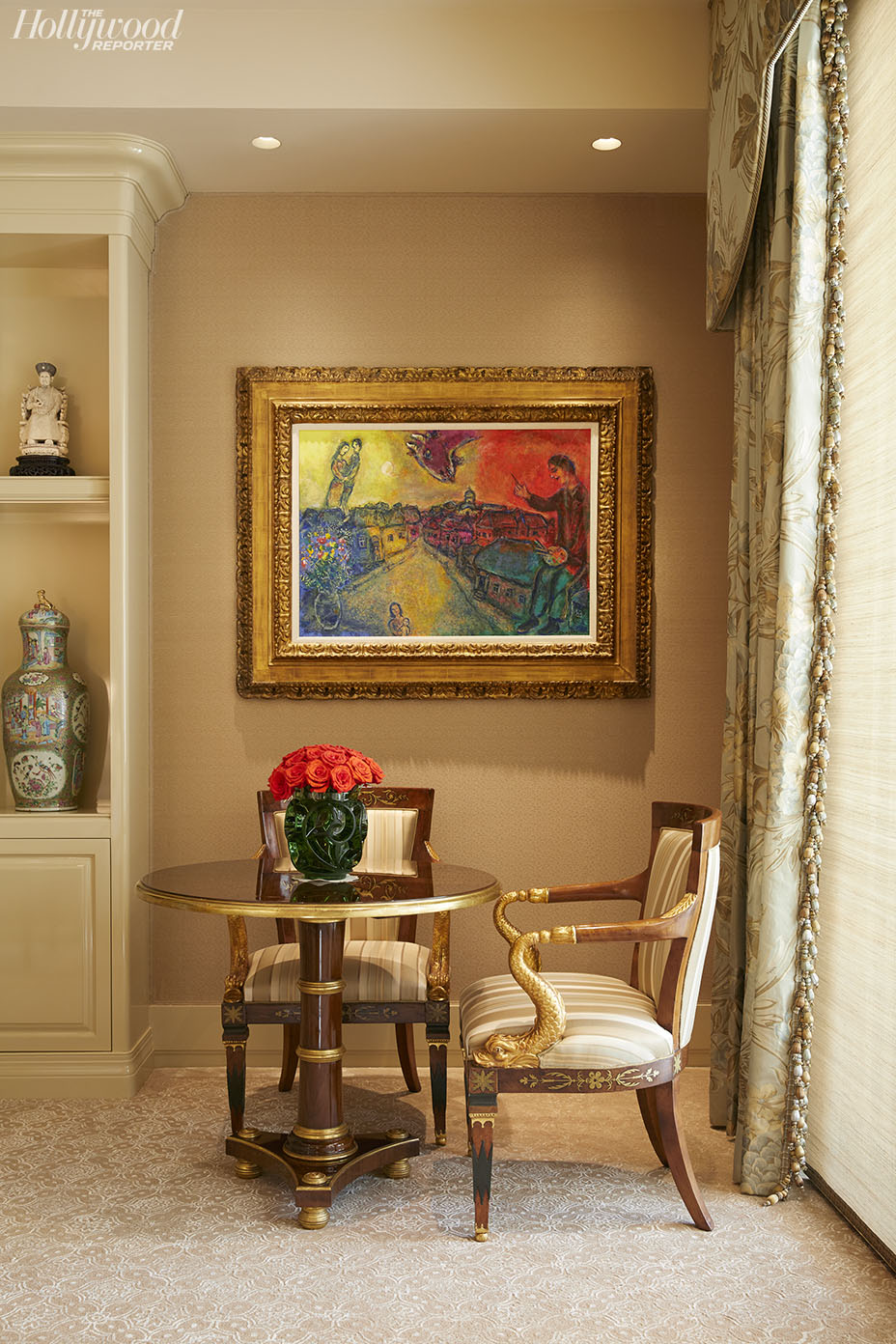 The soothing hue also winds its way into the couple’s bedroom, where its calming tone is gleefully interrupted by Marc Chagall’s vibrant Painter over Vitebsk and Kees Van Dongen’s equally vivid La Gitane. The minty shade also plays a part in the design of the home’s exterior, where bronze sculptures from Henry Moore and Pierre-Auguste Renoir lend their soothing patina to the gracious backyard. 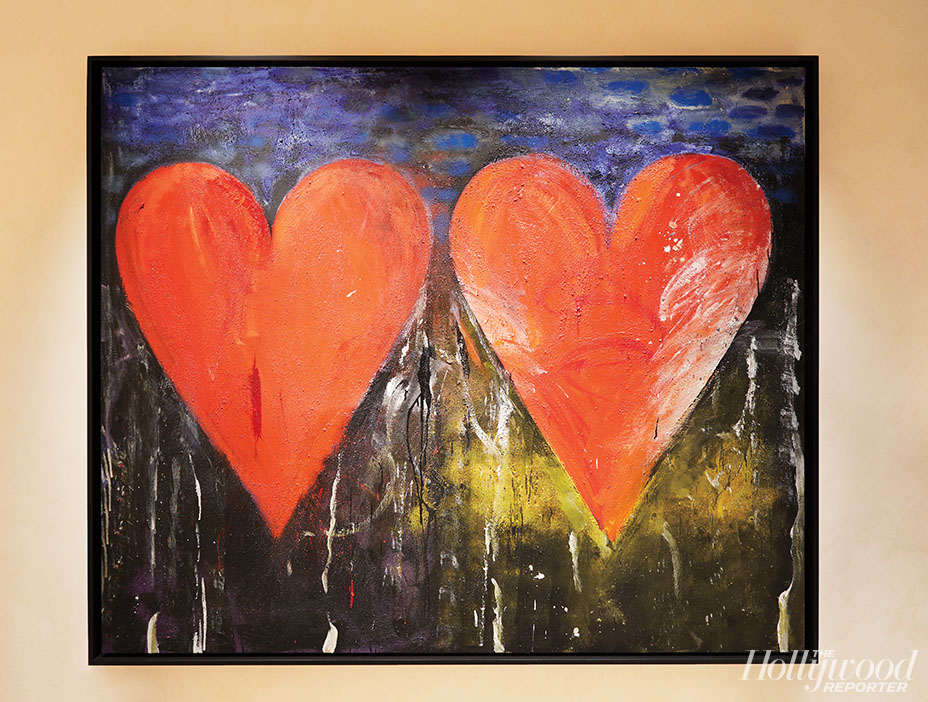 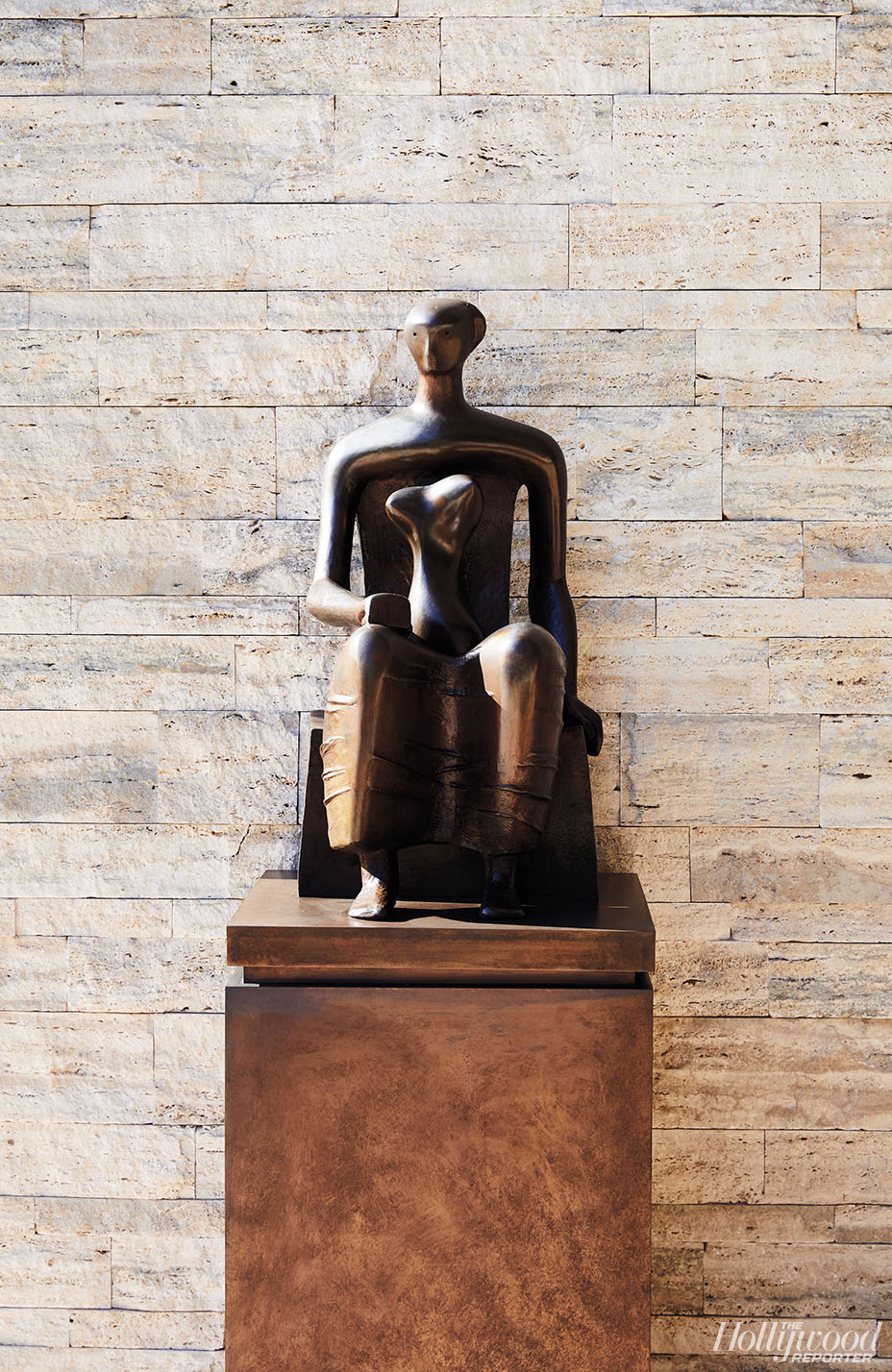 “When I started to assemble this house, I didn’t realize there was going to be such an art presence,” says Caroline, “I think it’s more cohesive here, in this environment, that it was even in New York [where] it was more separated into different rooms.”

From Sidney’s home office, made more private by swapping in a frosted art deco-style mosaic by Mark Tuna of Glass Visions Studio as a window, the producer oversees a busy slate. The SK Global roster, headed by co-presidents John Penotti and Charlie Corwin, includes the sequel to Crazy Rich Asians, which may begin shooting in the summer; Palmer, starring Justin Timberlake; a true crime drama called Alice and Frida Forever directed by Jennifer Kent for Amazon; and The Sky Is Pink, with Priyanka Chopra Jonas, a Hindi language film debuting Oct. 11 worldwide. 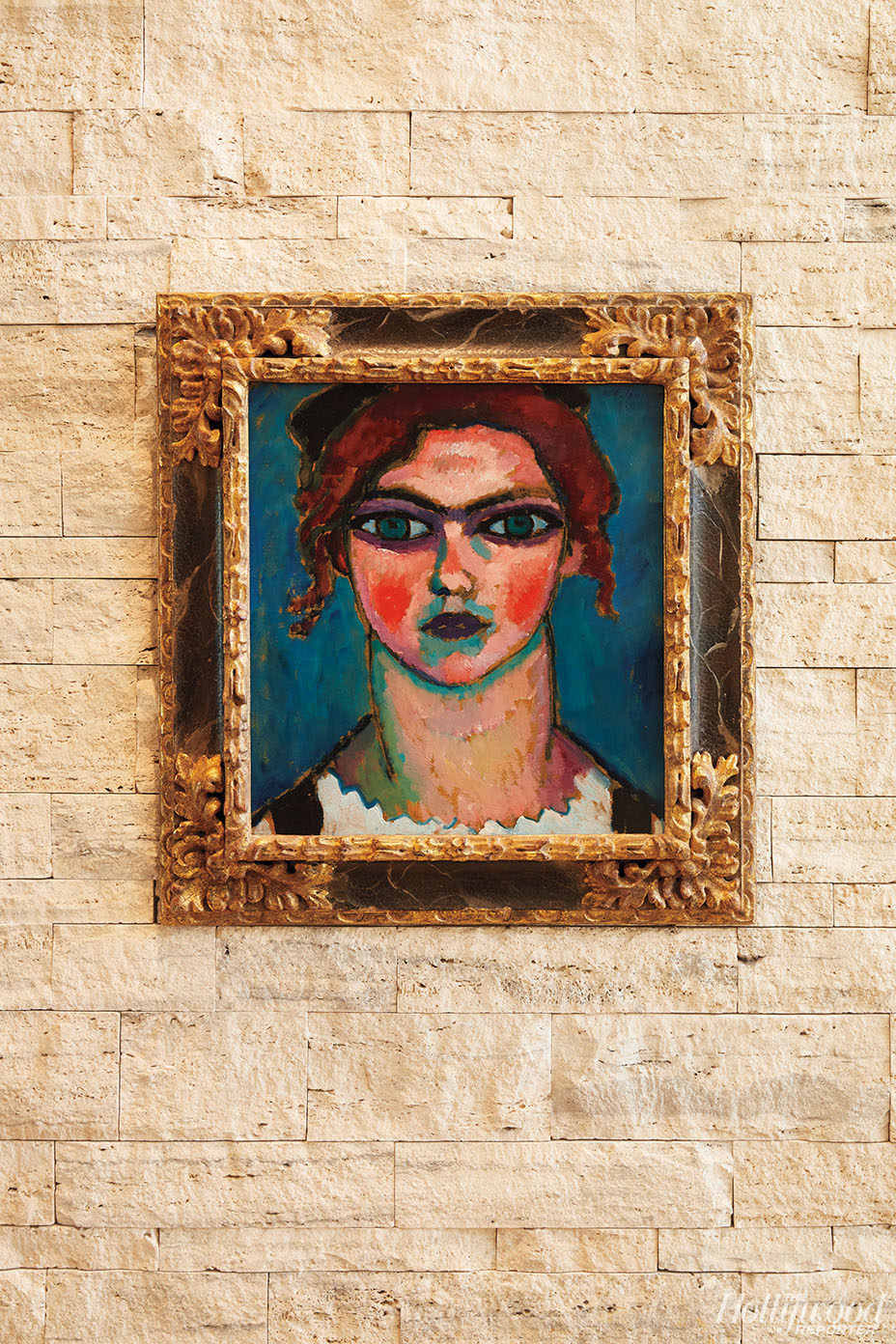 The Kimmels are veteran entertainers, and there have been moments, Caroline confesses, when first-time guests have been intimidated. “If you look at this house,” she says, “what you see is the scale and the height of the ceilings. And that scares a lot of people.” The room’s grand proportions are the ideal setting for the 77-inch rock crystal chandelier, sourced from John Nelson on La Cienega Boulevard, which hangs above a table that can seat up to a dozen. Frequent dinner guests include former Paramount CEO Sherry Lansing and her husband, director William Friedkin; attorney Ken Ziffren and his wife, Ellen; agent Toni Howard and her husband and Can You Ever Forgive Me? producer David Yarnell; and crooners Paul Anka (with his wife, Lovey), Frankie Valli and Steve Lawrence. Caroline’s collection of antique dinnerware, including signed plates by Dali, provides a beautiful frame for meals prepared by the couple’s chef, while Amedeo Modigliani’s Femme aux Mains Jointes, which had been in the couple’s bedroom in Palm Beach, and Jean-Pierre Cassigneul’s Dans la Roseraie preside over the table. Says Caroline, “I was amazed at how it all works together. Here it seems to flow.”